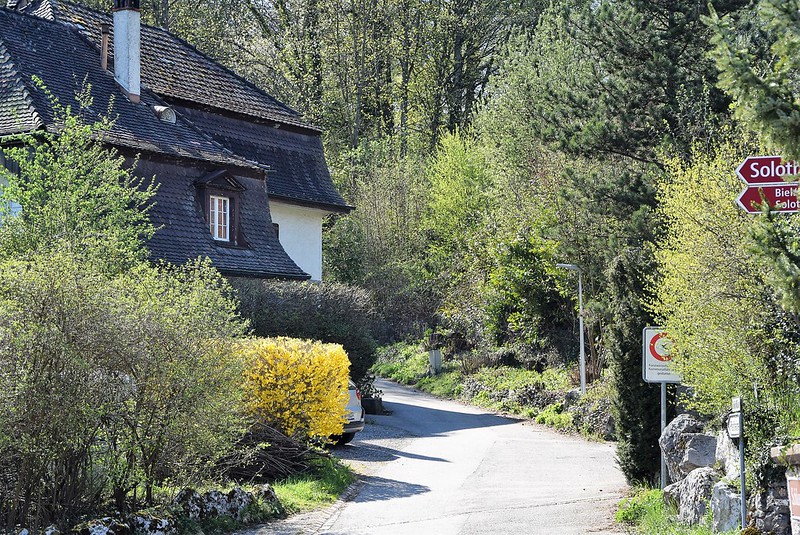 A path in our village 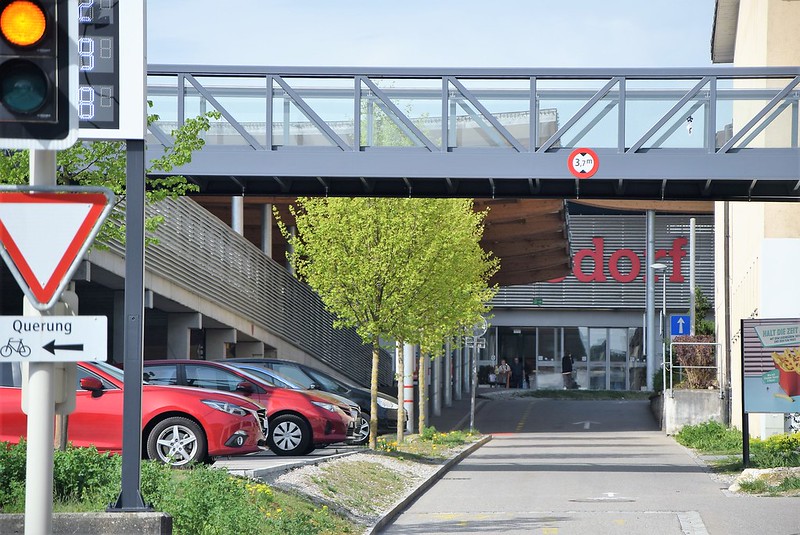 Entrance to the local supermarket 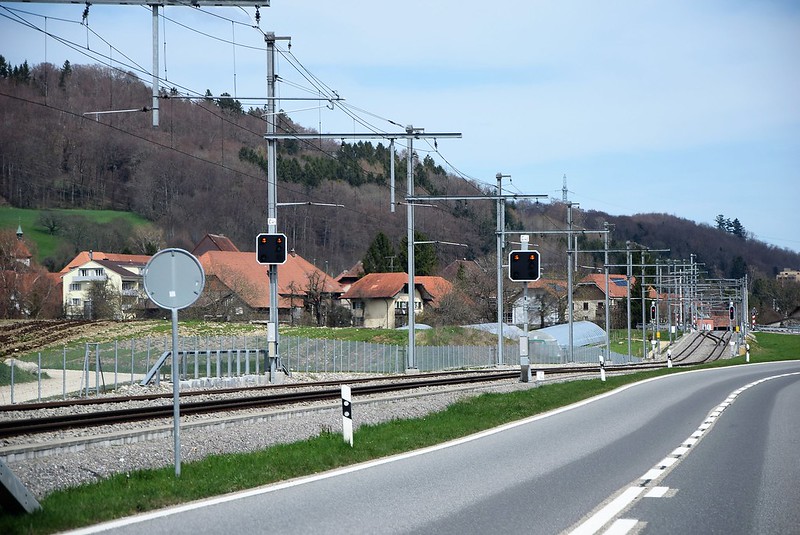 Sometimes there are many ways available 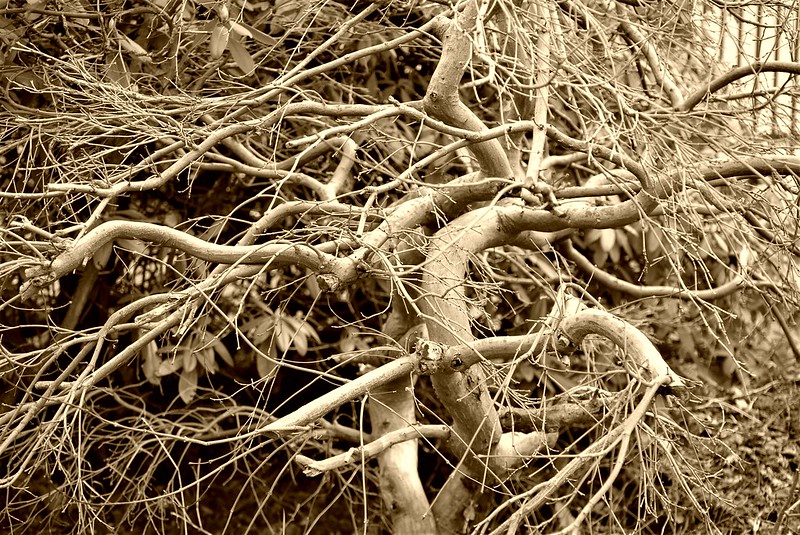 No tumbleweed in Switzerland, this is just a tree that tumbled. 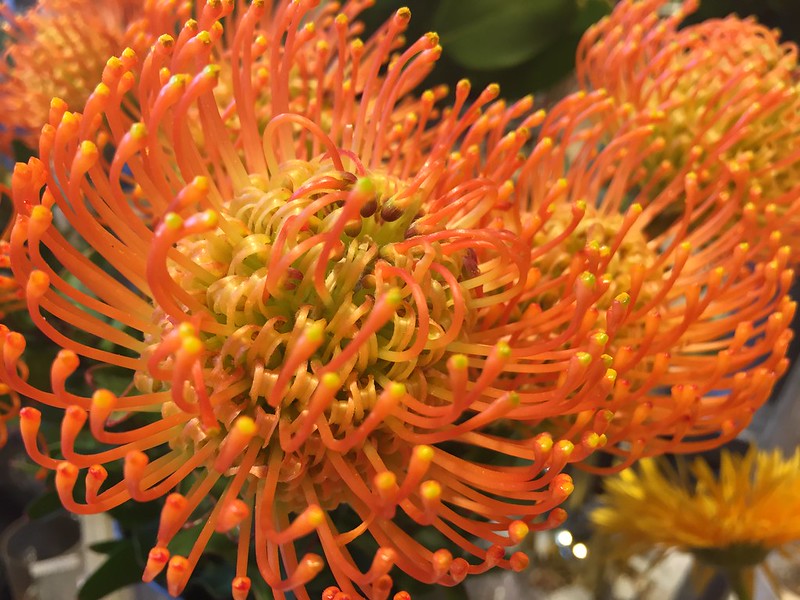 That is what the label said in the store, but I think they are also known as Pincushion Protea, or perhaps son of Triffid. 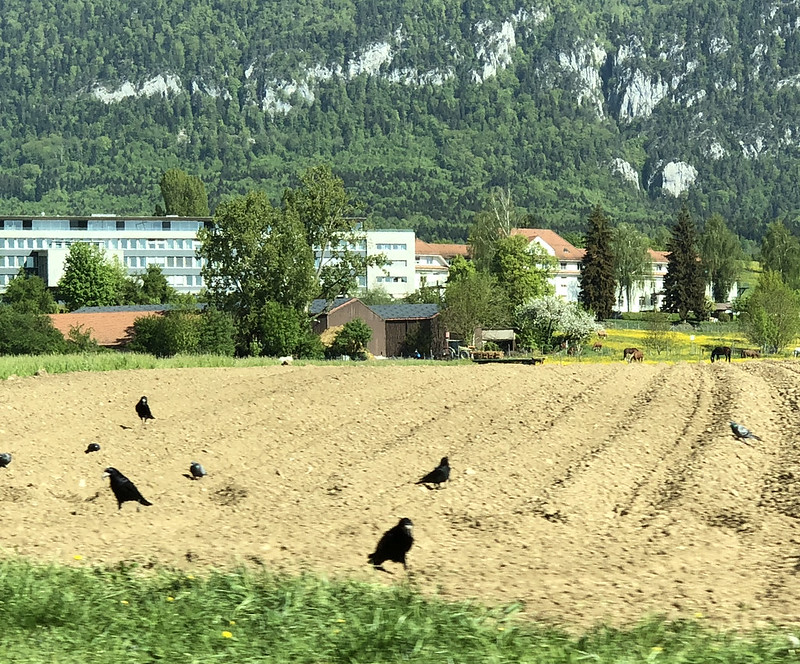 This morning we went on our normal shopping safari. On the way to the supermarket we passed a freshly mowed field. It is part of the farm adjoining our local psychiatric clinic in the background.

And then I saw the crows. I am sure Alfred Hitchcock would have bee delighted. Crows seem to have an antenna. “Look boys and girls, they have prepared a table for us” and they appear from all directions. after the field is freshly mowed and the earth turned.  I assume that when the surface is removed all sorts of living objects appear, suitable for a crow meal. It seems that crows are one of the most intelligent birds and have a good memory.

We have a crow colony bordering our territory. They sit in the trees and suddenly as if the chief gave an order, they go for a collective fly past, arriving all together in another tree. There fly overs are also accompanied with caws of course. I just love those birds. 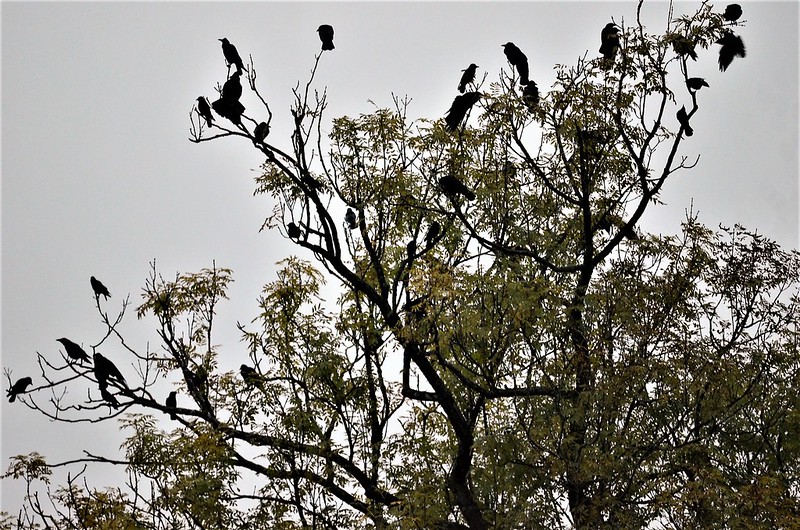 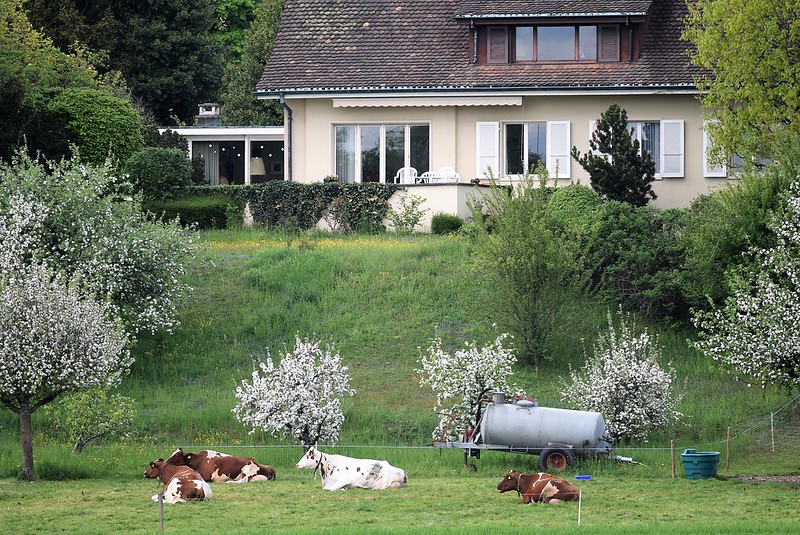 Yesterday afternoon I was out again on the trail. It was sunny, but not as warm as it was, although I could get still make do with a t-shirt, but this time with short sleeves. The cows never seem to feel the cold  and they can relax anywhere.

I had my very first day yesterday doing my normal morninjg cleaning routine. I know it sounds stupid, but after being restricted for 4 four months recovering from a broken leg, you really feel good. I did it all in my usual half hour with no problems.  Admittedly I had to grip a few pieces of furniture on the way, to steady me, but that is not something our of the ordinary for me. I had my shower, got ready and felt good. Mr. Swiss was off for a small shopping trip and I realised that everything was done. I had some spare time and cleaned down all the doors. I have my routine and it is really only a 20 minute job and now I was really ready to go. Angloswiss is back. 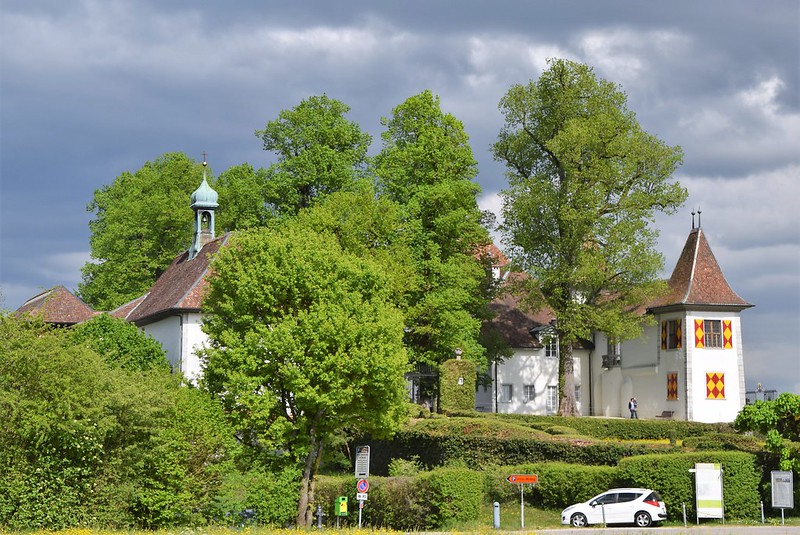 As usual my route took me passed the local castle Waldegg, but this time I shot it from another angle, at the side where the entrance is. I carried on the downhill path, around the bend, and visited my friends the chickens 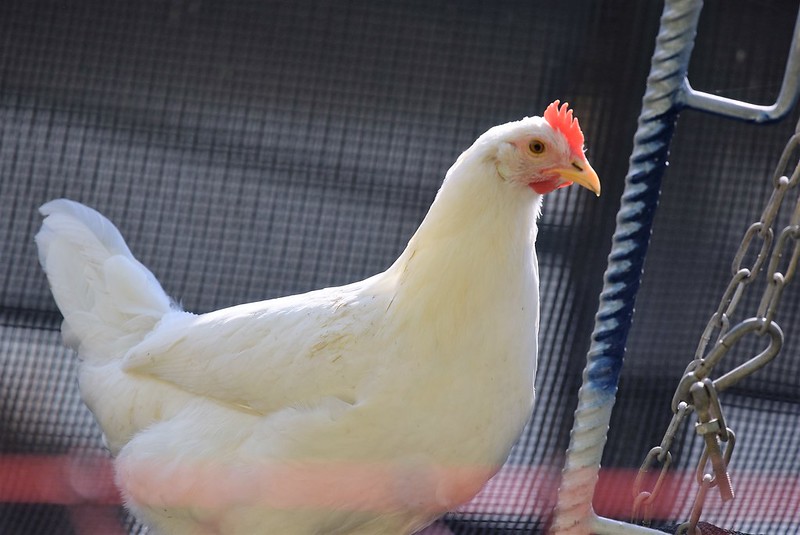 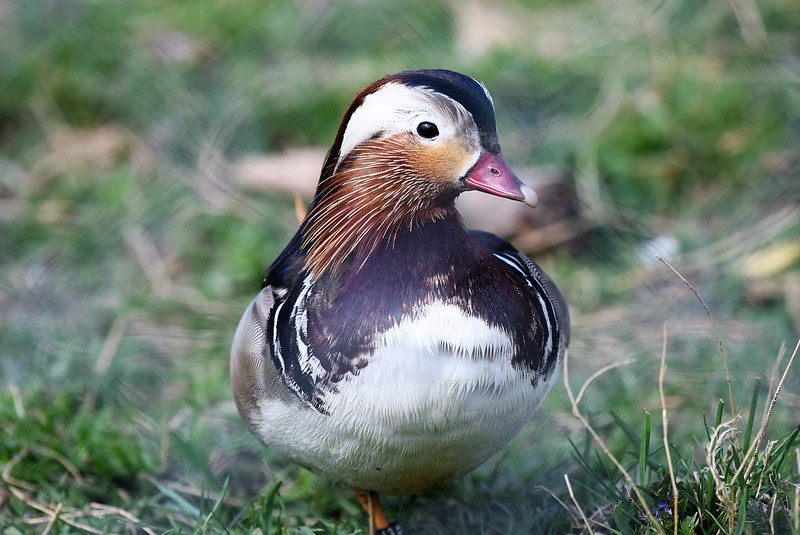 I noticed that the pair of black swans were no longer there with the babies, or pehaps they were hiding somewhere in the shade. There were a couple of men working on the pond, so perhaps they wanted to escape the noise. I wheeled on further, through the burial ground and home. It was a few days since I had ventured out on a wheelie in my chair. The disadvantage is working on 50 photos afterwards, sorting them and uploading on the computer. Then there was the Eastenders, the only programme I like to watch on the TV. It might be a soap, but it is based on my home town area of London. There was a week-end shopping list to compose with Mr. Swiss consultation and eventually I dropped into bed, tired but happy.

There was interesting news on the TV yesterday. It seems that the Swiss Roche chemical concern have developed a new drug for MS treatment, known as Ocrevus. It is not a cure, but progress. It still has to be injected, but slows down he progression of the disease more than the medicine that I am now using. I read all the details in Internet. In Switzerland it is already available and will eventually be allowed for Europe. It was a complicated read from Internet, but at least research is being made. There will probably never be a cure in my lifetime, but improving symptoms is good.

And now to go on a safari in the appartment with all my work apparatus. It is so good to be able to do it again. 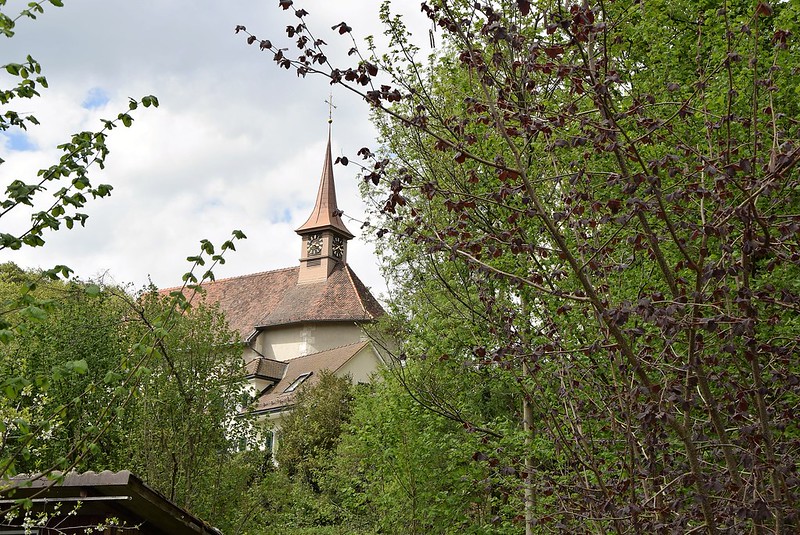 In the meanwhile I leave you with a view of the village church. Relax and have fun, we now have a week-end in front of us.