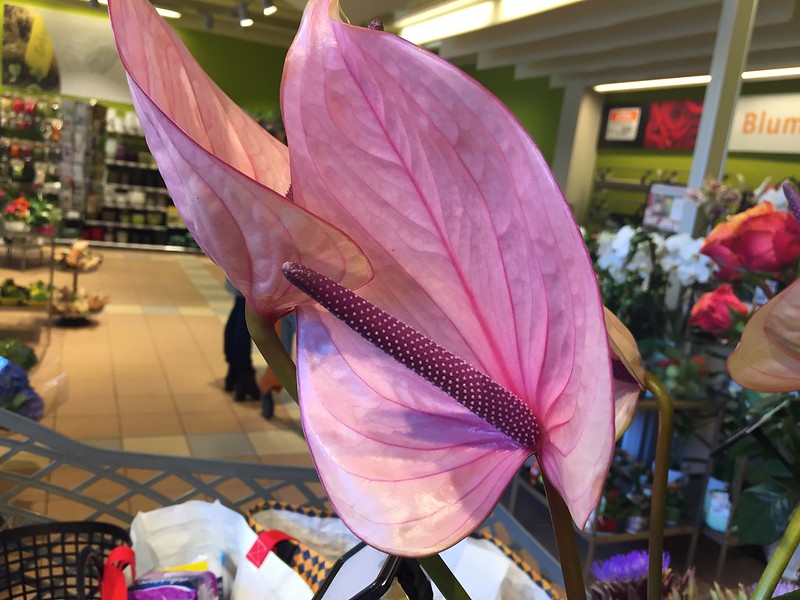 One of the weird ones with spots 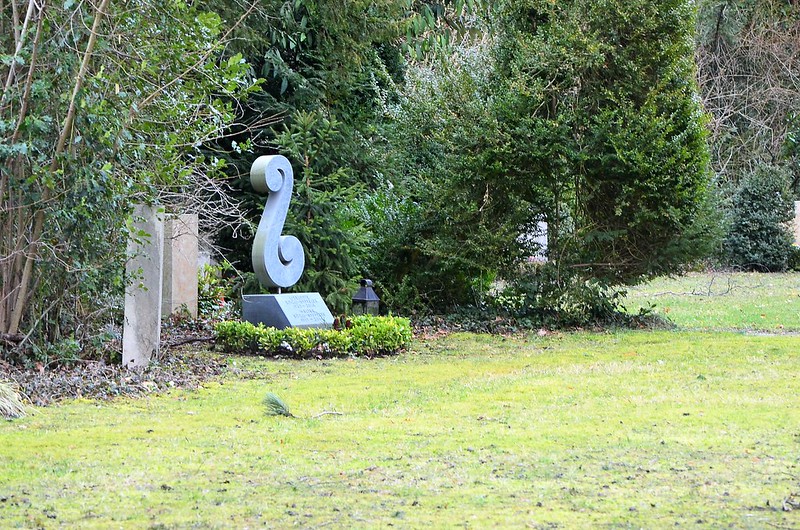 Seen at the local cemetery 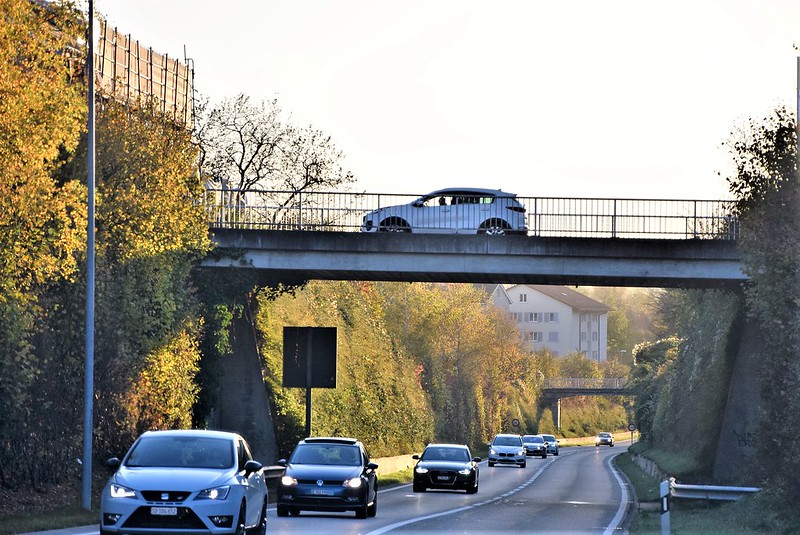 There are ways and ways. 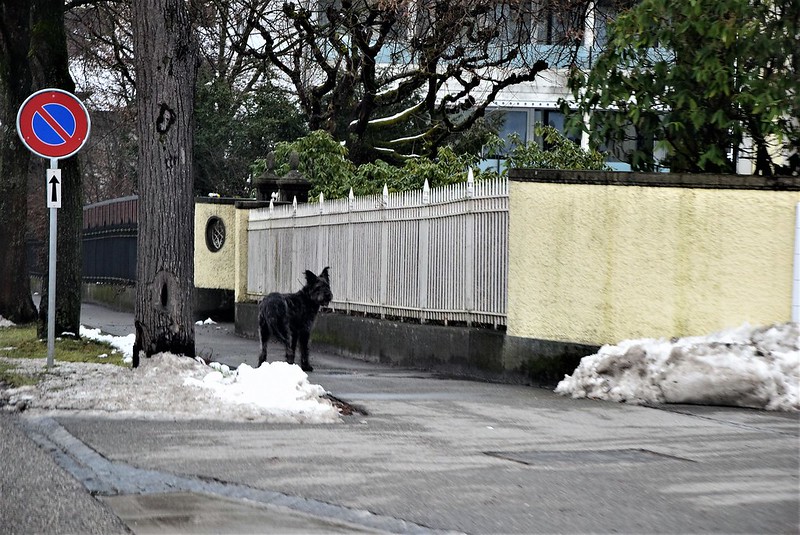 The dog seems to be thinking it over 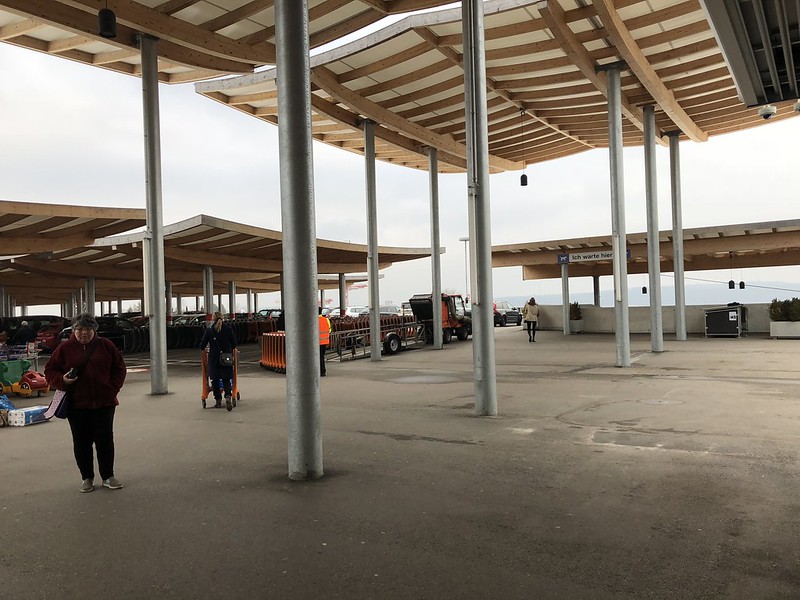 Shall I take the straight path, or do a slalom between the poles?

I am a little later today. Amongst other things I just watched the livestream showing Airforce 1 with Trump leaving Switzerland who has now also become a silhouette. It is really a big plane and so you can now have him again Americans. Did you miss him? Probably not. He was 24 hours in Switzerland speaking to other politicians and did the grand finale today with his closing speech which was mostly repeating everything he said three times and not only telling us how great America is (might be even greater without Trump) but telling us above all how great he is himself. They were the parts he repeated most of all. He even spoke to our presdient this morning, Alain Berset, telling him  how great Switzerland is as well. And Trump is a real expert on greatness.

So now to today’s theme, the silhoutte. 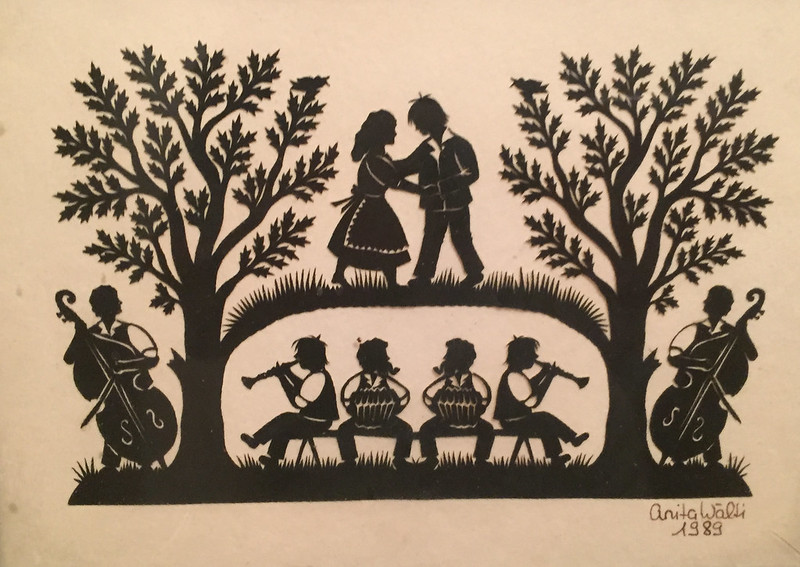 Making silhouttes is a hobby in some parts of Switzerland in the parts where they have folklore as one of their specialities. We call them “Scherenschnitt” which literally translated would be “scissor cut” and they are works of art. The cutters have a special small scissor and they cut carefully on the black paper to any pattern you would like.

We were visiting the Bernese Overland on the annual excursion from my husband’s company and you always get a few interesting events. This time we visited a lady that  cut silhouttes. She gave a demonstration of how it is done. Mr. Swiss worked  for the Volvo trucks at the time, and we were a group of people from the company. The lady said we could request a subject and she would create the silhouette. The request was for a truck. Otherwise it was all typical Swiss scenes.  As a goodbye gift we were all given such a cutting in a frame. You can buy them in a sourvenir shop, but they are very expensive as they are all done in handwork. The young lady that did this cutting signed it with the date.

I wonder if Donald Trump got one as a gift from the Swiss government. Actually he did not get any special honours in Switzerland as he was not here on an official invitation, but just to attend a World Economic Forum conference which he seemed to confuse with a Trump First conference. If I had a super telescope and it would be a clear day I could now see him winging his way to the North of my village, but the plane is now probably too high in the clouds. I have flown the route myself to the states, every year to England when my dad was still alive. You can even see our local house mountain from the plane as it flies past. 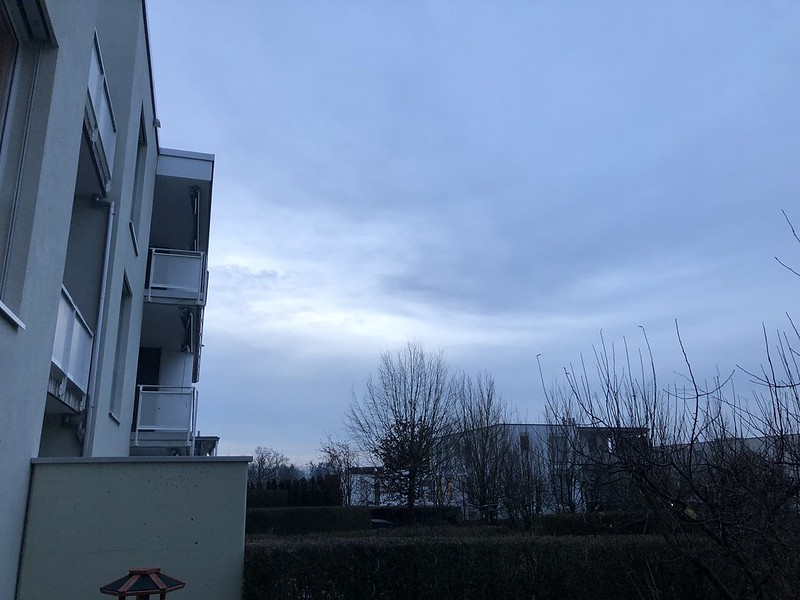 No special spectacular sunrise this morning. At first it was just a grey blue sky and now it is beginning to break up so it can only get better. It is far too warm for this time of the year. One of those January’s that everyone will talk about for a few years. We have had almost no snow this Winter and plenty of rain.

Yesterday was the big day in Switzerland. The Trump arrived in Airforce 1 at Zürich airport. Pardon me for talking about it, but I have not seen such a show in Switzerland for many years. Two days before he arrived there were demonstrations in Zürich and Geneva complaining that Trump is not welcome. The hills around the airport were crowded with plane spotters taking photos and hoping to get a peep at the big man.

8 black night helicopters were waiting to pick him up at the airport to speed him off to Davos, where the WEF conference is being held. He only needed one helicopter of course, so the others were an escort, or the assassins, if there were any, would have to guess which helicopter he was occupying. And then the arrival in Davos at the helicopter landing place. Of course a car was waiting for him and so they progressed to the hotel. I say they, because he was accompanied by another 30 cars even including two Swiss police cars at the end of the queue. Sorry but this is just a little exagerated for my taste. 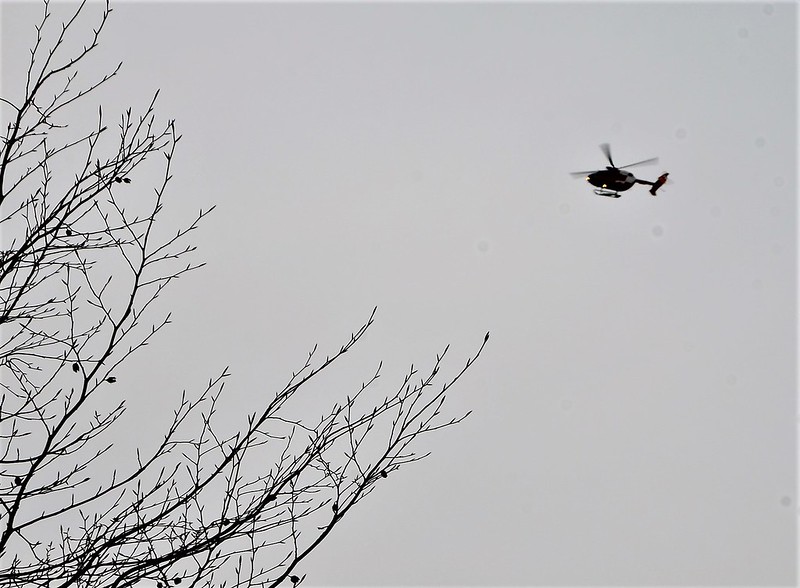 This is not one of Trump’s helicopters, although I am really not so sure. Yesterday afternoon I went on a trip in my wheelchair and heard a helicopter. I did not have time to change the lens on the camera, so it is a distant shot and not so sharp. The funny thing is that it is a black helicopter, not a typical Swiss machine and not army. I did not think further until a second helicopter appeared. They moved on, and then another arrived. Generally we see the rescue helicopters, the red and white ones, for people stranded in a mountain., but not so many. Perhaps it was just a coincidence. 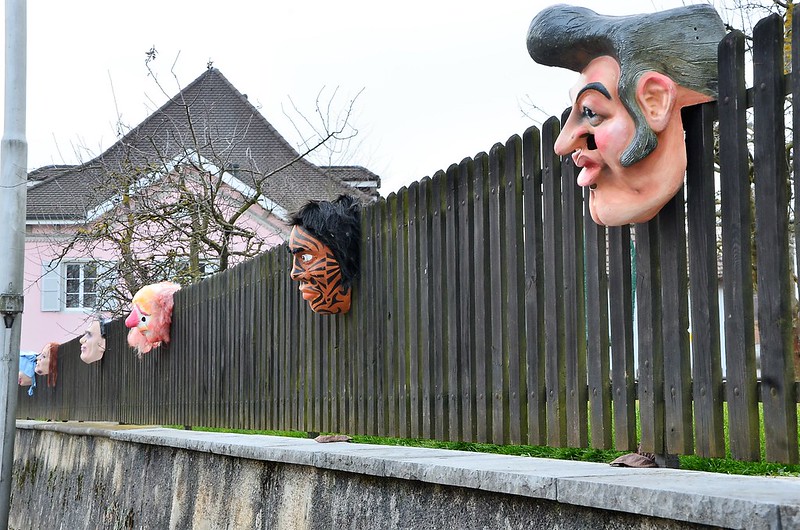 I took a trip along the main road as I had seen these masks when we passed by in the car. I decided to get a closer look. It will soon be carnival here around mid February and preparations are already taking place. This house owner had the idea of decorating his fence with various carnival masks. There would have been a better view on the other side of the road, but the pavement is not wheelchair conform, too narrow. 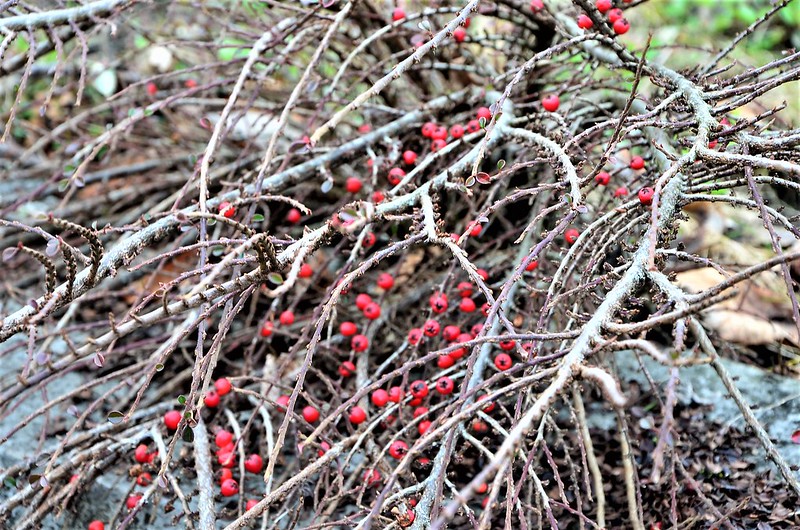 I have decided I need new eye glasses. I had my last ones a few years ago and they are not as good as they were. I can still read, but can no longer thread a needle or other such detailed jobs. This time I will have to go the whole hog and visit an eye doctor first of all. The opticians always ask if I have seen one and this time I will. I do not have cataract problems, at least I do not think so: no blurry spot in the middle of the eye, just bad sight. So first of all a visit to the doc and afterwards the opticians. How I hate these interruptions to my normal daily life. One of the problems of being a golden oldie.

So now I will move on, it is Friday: the week-end shopping day. The list is made and we more or less know what we want to eat. See you around some time and have a nice day. I will leave you with a bird meeting in my garden opposite my kitchen window. 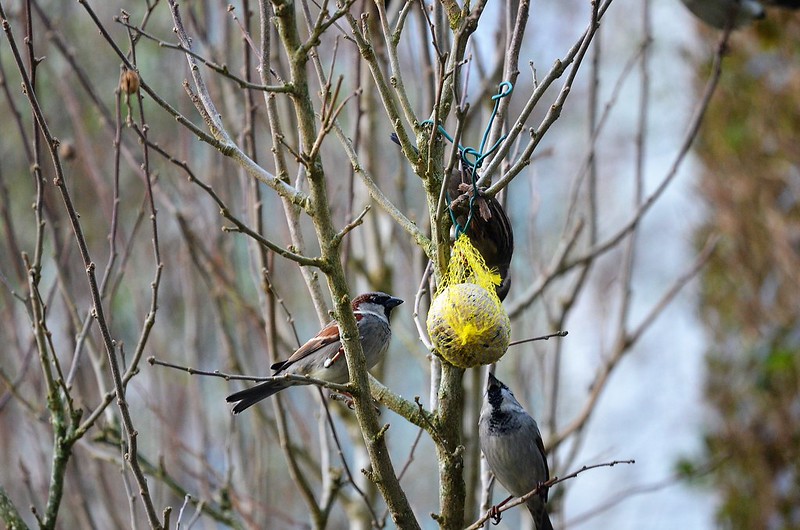