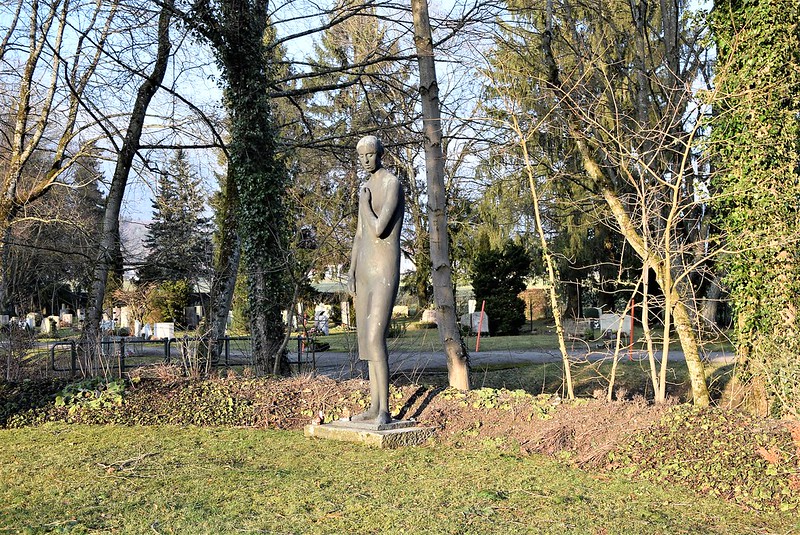 It is the part of our local cemetery with a children’s memorial. 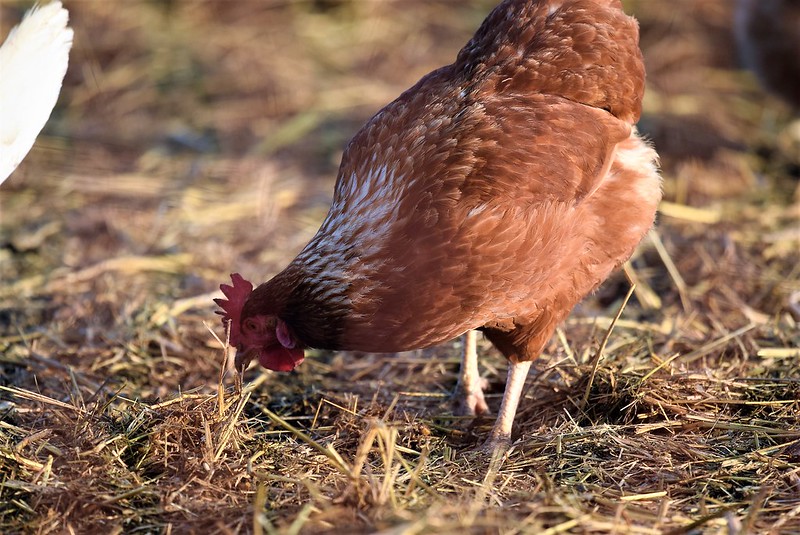 A chestnut chicken, one of my neighbours. 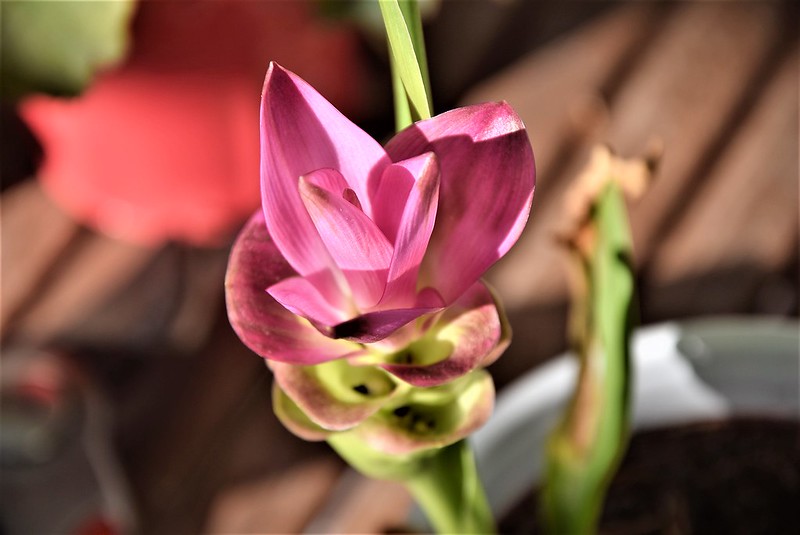 I did not realise that the spice turmeric had such a lovely flower. I had added the yellow powder to various indian dishes and quite like the taste. I was surprised when our flower store was selling them and even bought one myself. They grow from tubers and mine is now reduced to a few leaves. Perhaps I might get a flower again next Summer. 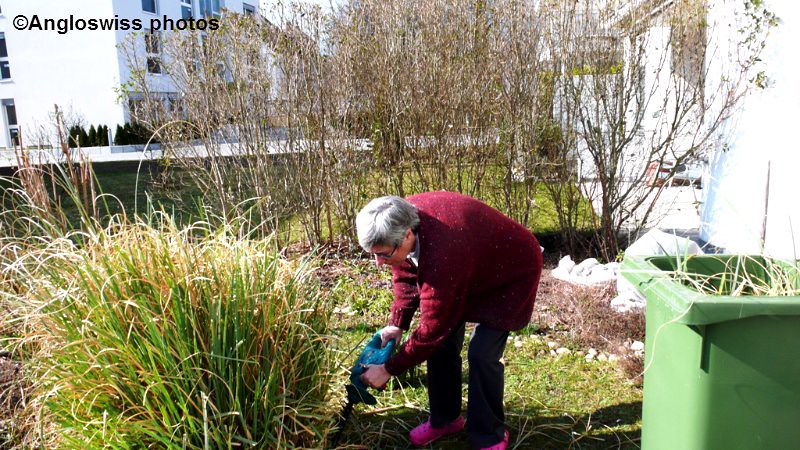 There was a time when I could move more or less, ten years ago to be exact, but agility was never my trade mark. Here I am in action cutting down the pampas grass. Note the shoes, ideal for the job.

I remember my school days when PT (physical training) and gymnastics was on the agenda.  I hated it, really, the worst day in the week. We even had to dress for the torture. Plimsolls (sort of cloth schoes, very flat with rubber sole) and you ran around in your nickers and vest. That was when you were at an age when everything was flat as a pancake in any case, so it made no difference. It was all in the name of being healthy. There were those girls in the class (it was an all girl school) that could jump over everything, do handstands and win races.

I was the third tallest in the class and had never stood on my hands, they were too far away from my body.. It is a fact that tall people can jump higher and run faster, but there are always exceptions to the rule and that was me. If I ran my long legs were in the way. Jumping was OK, I even managed the highest jump, the only problem being that often I would fall over the rope and collapsed onto the floor on the other side. In the high school we had more advanced material and were now bare footed (we were miniature Amazons) and even had shorts to wear and a t-shirt, but clothes do not make an athlete.

We had this big wooden thing to jump over with two grips one for each hand, known as a horse. It was big, and I was high. The idea was to run, jump, grip the handles and propel yourself, raising your feet to descend on them on the other side. This was one of those moments when I would be very nervous but our gymnastic teacher, who seemed to have bones made of rubber, was convinced that we could all do it and all of us could except for me, but I put a brave face on it, ran and jumped and …. I did it. I was so happy. My feet were intact on the other side. It was soon time for the second round, but this was pushing my luck. I ran, jumped and my feet somehow had contact with the jumping surface hurtling me down to the other side. When the teacher noticed that I could still move my limbs, she decided it was just bad luck. It was the beginning and end of my olympic hopes.

We had ropes swinging in the gym at school and the idea was to climb up to the top. I was so envious of all that could do that. Admittedly my feet never left my legs, but they never climbed the rope. Again I just hoped that the teacher was looking the other way.

However, my life as a sportswoman was not entirely a failure. I was in the land hockey team for the school. I had tried netball, but never found the net and as explained, athletics was not my thing, but hockey. It was like football, but with a stick and I loved football (soccer for those across the pond). I was a right back in the team, and although we had to move, we did not have to move gracefully. The only achievement was to score a goal by hitting the little round wooden ball with the stick. I discovered that this was easy peasy. I was supposed to be in the defence, but if you pushed the ball in the right way you could easily score. I developed my own style and it got me into the school team. OK, I only played in one match and cannot remember if we won or not. There were a few injuries, but we all survived.

Today my agility knows no borders. My movements on the computer keyboard are poetery in motion and my touch screen ability is perfect. You should see me in my wheelchair in third gear, I overtake everyone with the speed of lightening. 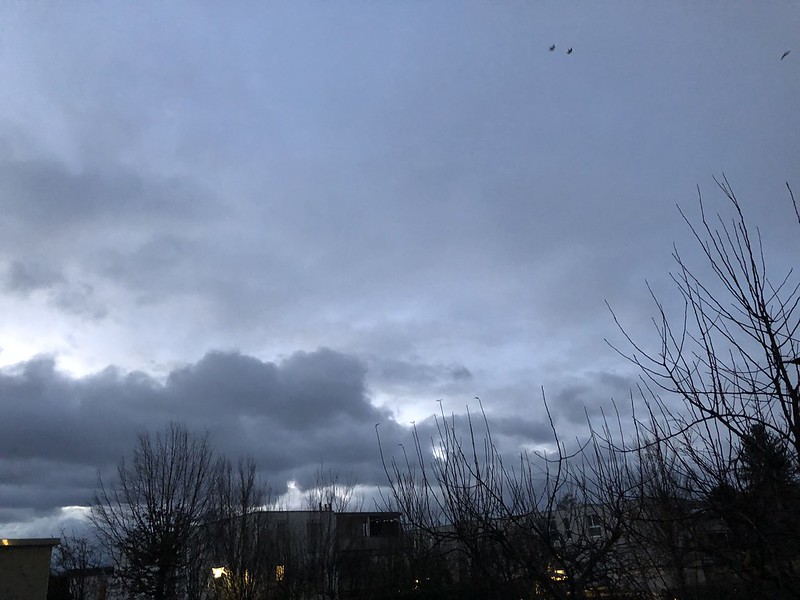 It does not get better. Yesterday we wee bombarded with high winds and this morning it continues. The weather prophets said that Evi (the name of the storm), will not be as bad as the last one. The last one was here for a day and night, and Evi has decided to move in since last Monday. Opening windows has become an impossibility as we have a wind channel afterwards in the appartment. However, we now have clouds, although they move fast. Yesterday afternoon we even had blue sky for five minutes. Never trust a meteorologist, it is all fake news.

There is no sign at the moment of this storm moving on an everything is wet outside. 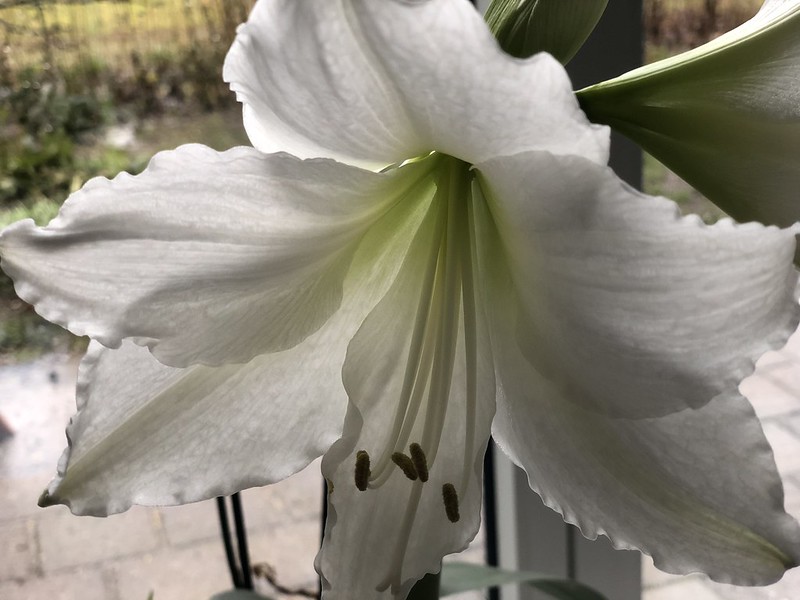 Midst in the storm my white amaryllis is flowering, but indoors.

Today is a day of shopping, stocking up on food. I should really get some emergency rations as I have nothing at home in the case that shopping would not be possible. I do drive and avoid it when I can. I am just not happy behind the steering wheel, and Mr. Swiss does the job quite well.

There is also a bit of a storm on my wordpress. For some unknown reason there is a guy with his web site, which I definitely do not follow, is pressing likes on my contributions since two days, more than a hundred a day, and I cannot trash or spam them. Twice he has made a comment, even on a colleagues page about me, and I could remove it. He is not insulting, just stupid and dumb. I am now seriously looking for a possiblity to block this idiot from my site. It seems he leads an online life and belongs to every sort of social media connection you can imagine. He must lead a very boring life. Perhaps he only exists online.

At the moment I am also leading a very bored life. At last I have a possibility to go out again with my wheelchair, and now the weather situation is not permitting. 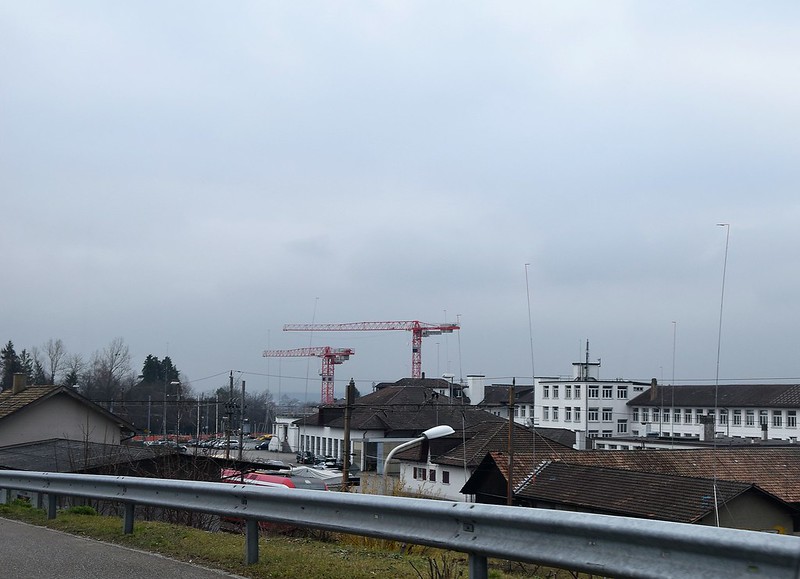 It is a short one this morning, but it can only get better. A short excursion around the appartment with the vacuum cleaner and mop and a larger excursion to the supermarket. See you around, enjoy the day and keep safe.