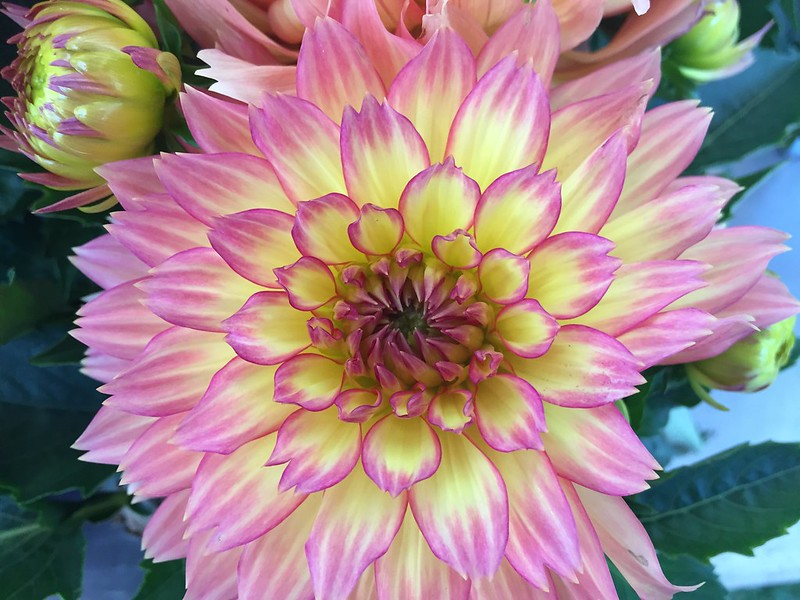 It’s in the pink 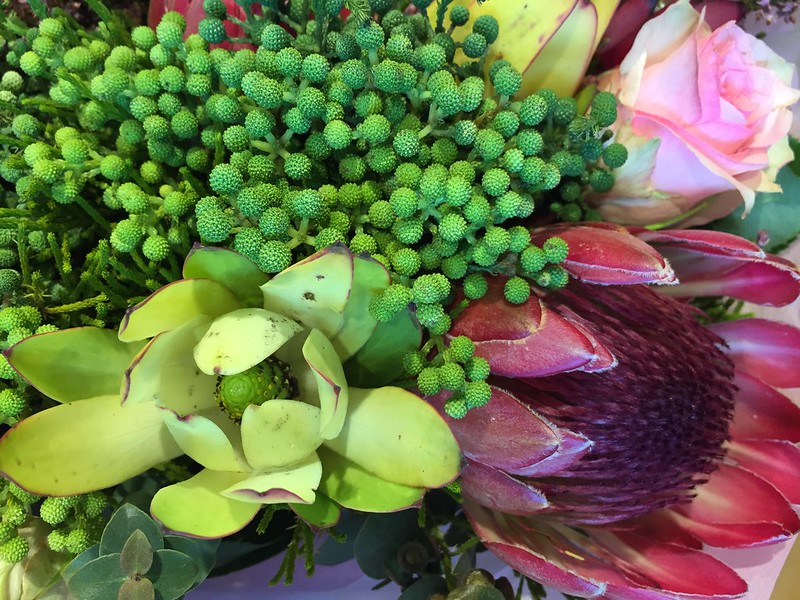 This is a bit of a mixture. I see a protea on the right, and something weird on the left (a triffid?). The green spiky balls are probably just for the decorative effect, but look interesting (baby triffids?) and there is a rose hovering in the background. 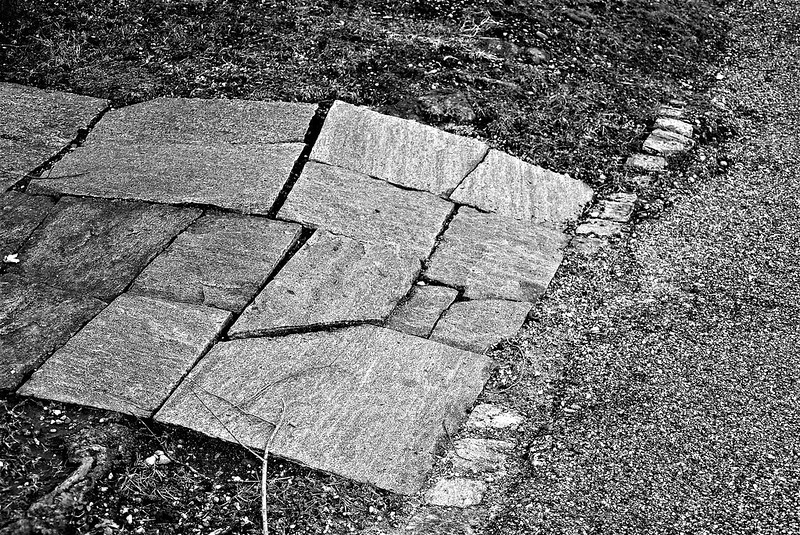 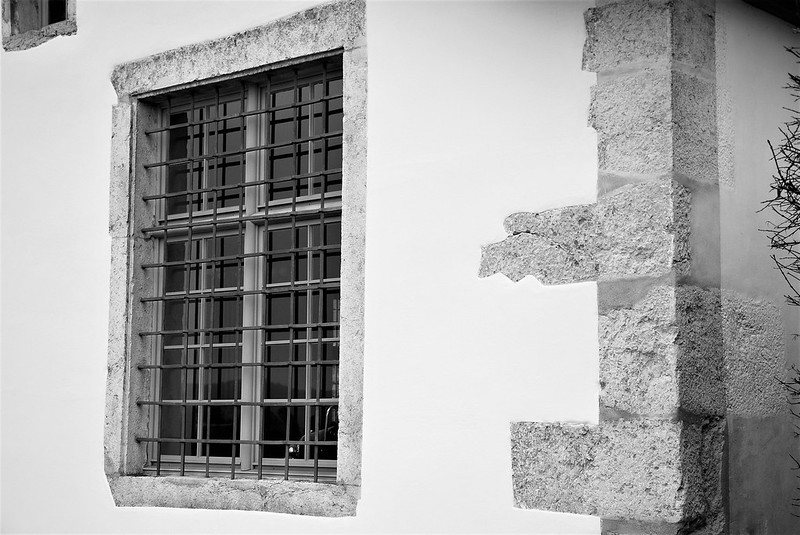 Metal bars over window in the local castle. 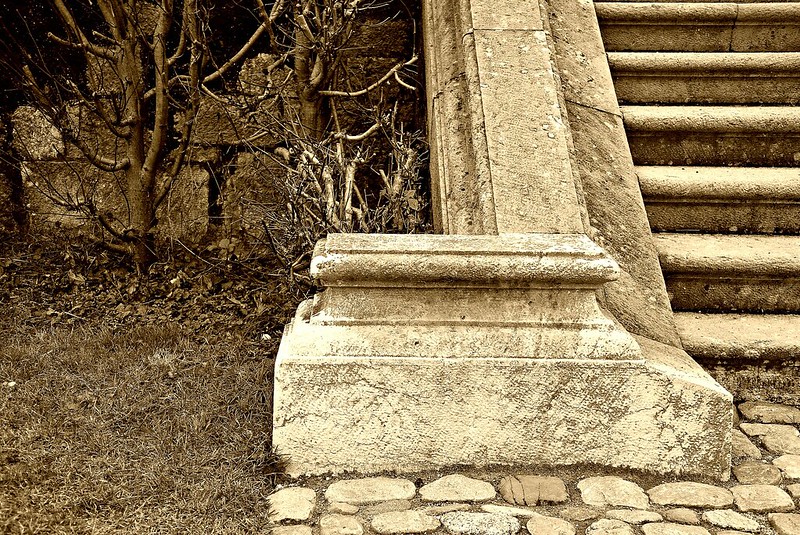 Base of stairs at Castle Waldegg, Feldbrunnen (my village in Switzerland) 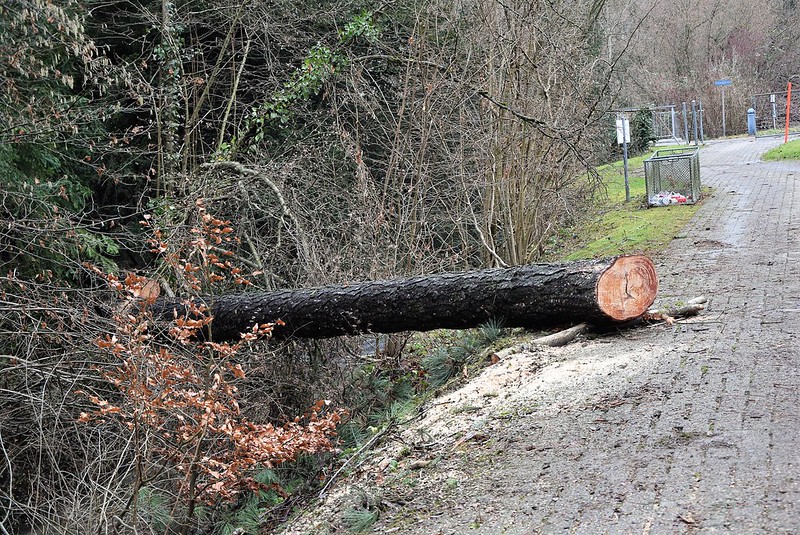 After the storm last week, there is enough wood laying around for a carver’s delight. Twigs and branches are all over the paths and trees ready to be chopped into small pieces and collected.

The only thing I would carve is a turkey, although the last time I cooked turkey must be at least 20 years ago. Turkeys are not seen very much in Switzerland, we import most of them. We have roasted chicken now and again, but I do not really carve the chicken. I chop them. First remove the legs, then the wings and afterwards disect the chick into pieces.

I have never carved a heart on a tree trunk, that would be Mr. Swiss job, and he has never carved one either, at least not for me. This prompt would be more a thing for a boy scout, they even get badges for carving. 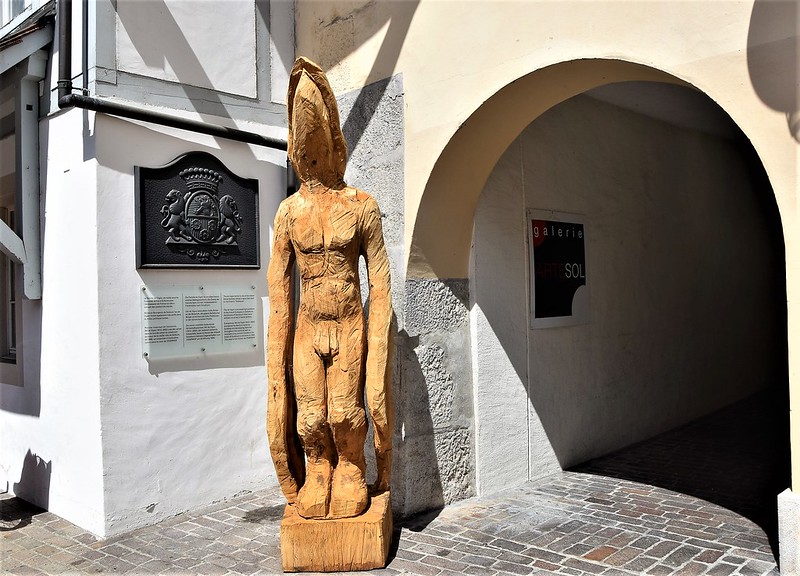 I discovered this figure in a corner in our local town of Soloturn. someone must have carved him I supposed. Whoever the carver was, he probably had too much wood as the arms seemed to be a little out of proportion. There are a few other parts out of proportion as well, it seems to me.

I think I have now covered it all. I am not inspired, or prompted, but have done my daily duty. Have just come back from an excursion, it began to rain. Whilst I was away Mr. Swiss got to work on my potted horse chestnut tree in the garden. The earth had accumulated moss on the top and he decided to carve it away. He discovered that it was not a top layer of moss, but the roots had planned to take over the pot. Instead of the planned 3 minutes it became a half an hour job. Carving is not always as easy as you think. 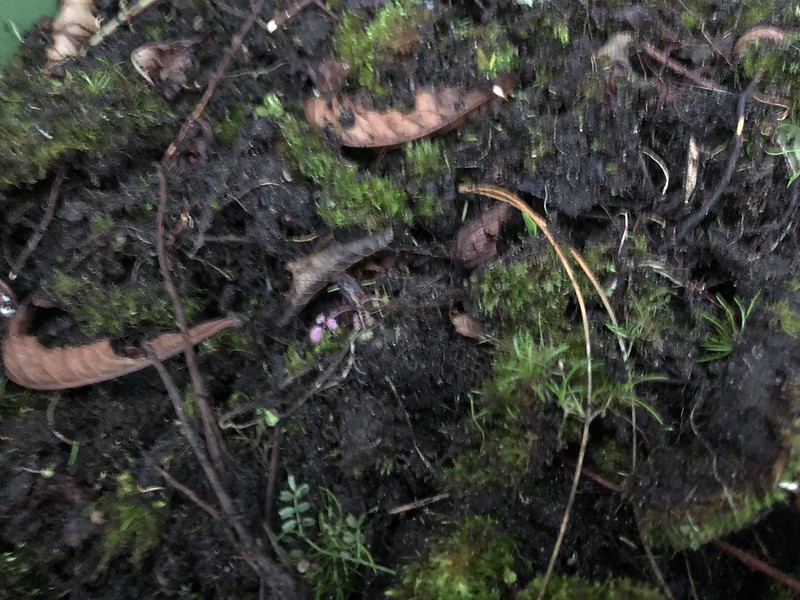 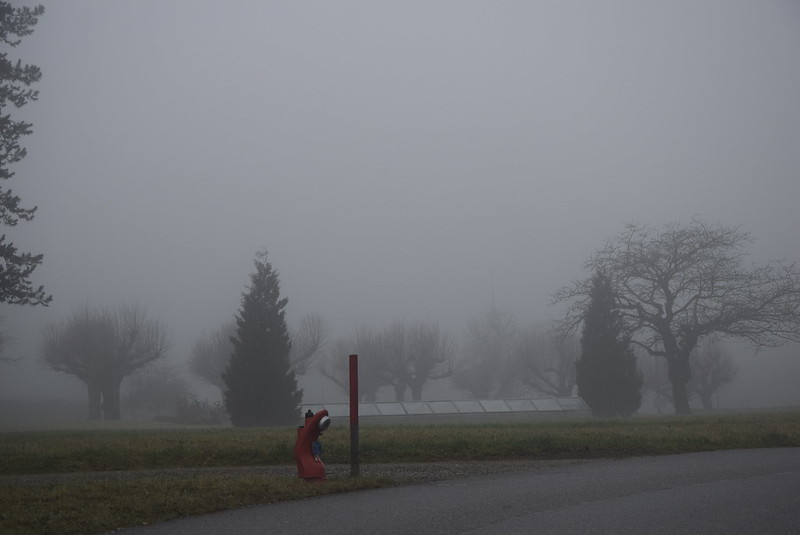 Yesterday was a very misty day, some would call it fog, but fog for a Londoner from the sixties it means air pollution, yellow and thick enough to cut through it with a knife. This was a better kind of mist. I though it would be gone by the time we departed for our safari to the supermarket, but it was still hovering: ok a good opportunity for misty photos. I decided not to polish them up but leave them in their natural state of rough outlines of trees in the distance. 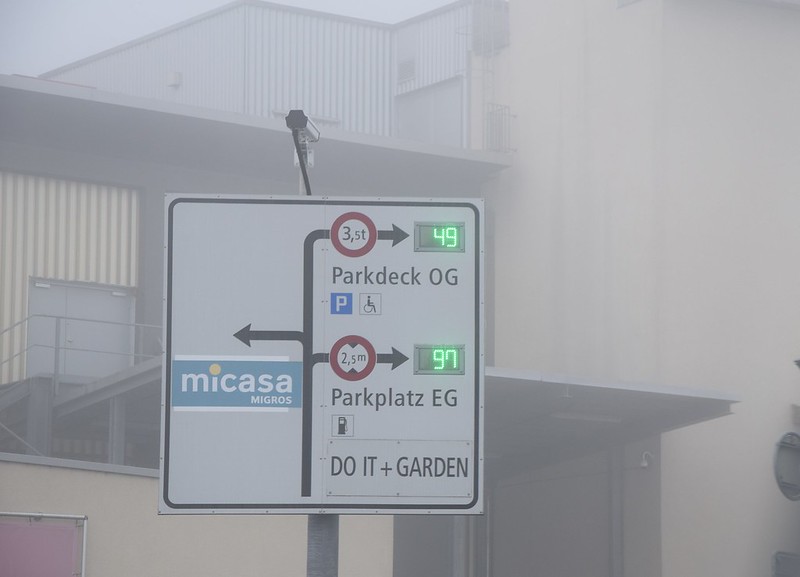 When we arrived at the store even the figures for the empty parking places were misty. It looked good, so Mr. Swiss went to the park deck which I prefer. It is a raised area above the normal parking places and a good place to take a few photos of the surrounding countryside. On a good clear day you even get to see the alps, but it was not a good clear day. Even the cranes in the building site were steeped in mist, although today not such a problem. The crane operator no longer sits in the clouds, but steers the whole thing with a remote from the ground. 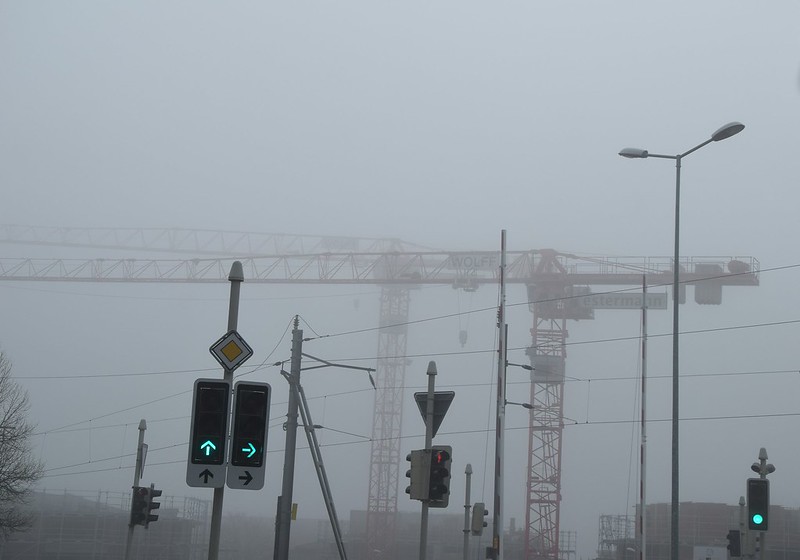 As we entered and left the store, I saw that Christmas was at last dead. The demolition of the last Christmas tree in the area was taking place. At the beginning of the week the decorations disappeared and now the tree. 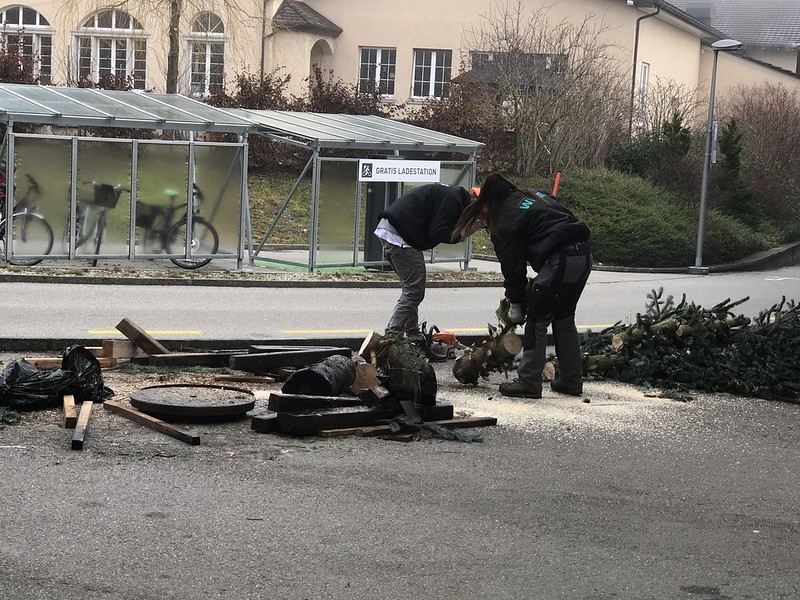 I do not understand that they have to demolish the tree, it was in perfectly good shape, but I suppose the moor has done its duty and the moor can go. All over the western world  Christmas trees are being demolished and murdered, but they will return again next year, probably already in September. I did not have a Christmas tree and did not want one. Even our little plastic tree stayed in the cellar this year. Mr. Swiss said it was losing its needles and making a mess. Even plastic has its problems.

The next instalment of the Trump visit to Switzerland is that our news is now naming it “The Trump Show”. In another report I read that in Zurich  left wing groups are already organising demonstrations. This is not only against Trump, but generally agains the WEF. It happens every year at this time. A few panes of glass are destroyed and the police have something to do to brighten up the dreary days of Winter. I do not think that there will be any problems in our little town of Solothurn. The last demonstration was because the ferry across the River Aar was deemed uncertain and the farmer had to buy a new one. Money was collected and it is now forgotten. The demonstration took place mainly in Facebook. Yes we live midst in excitement in our area. 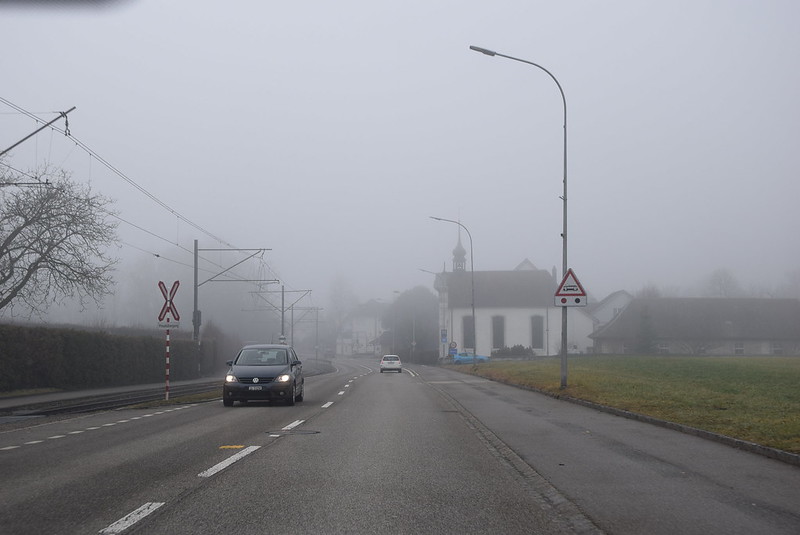 I have planned yet another adventure in my chair on wheels today. I will take the path at the side of the main road towards town, but will not be going as far as the town. There are sites that I have not photographed for some time, it is the pilgrim’s way. On the one side of the road the headquarters for the catholic priest students, learning the job, and on the other side the palace belong to the Bishop of Basel who has his residence in Solothurn for some strange reason, although I believe the diocese of Basel and Solothurn are sort of combined.

Today is the day of putting fresh linen on the beds, although it is already finished. We are both exhausted, Mr. Swiss more than I am. I just put the new covers on the duvet and cushion, but he does the rest.

Enjoy the day/night and keep blogging. 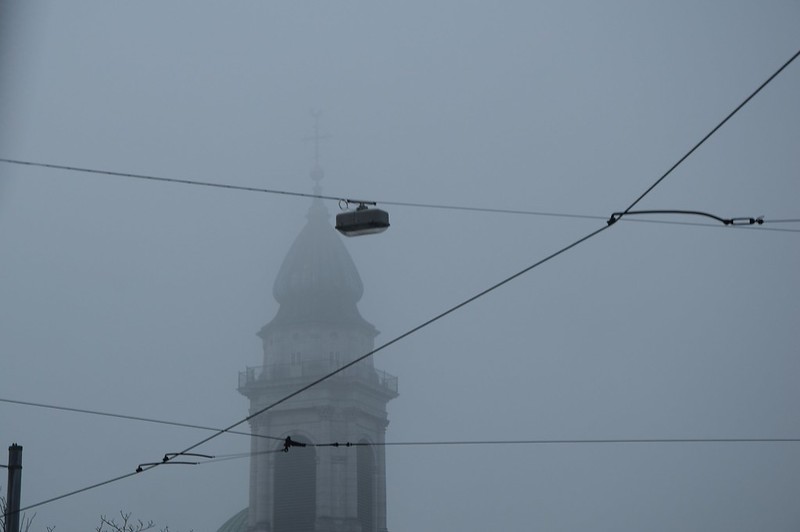 Even our cathedral was lost in the mists.