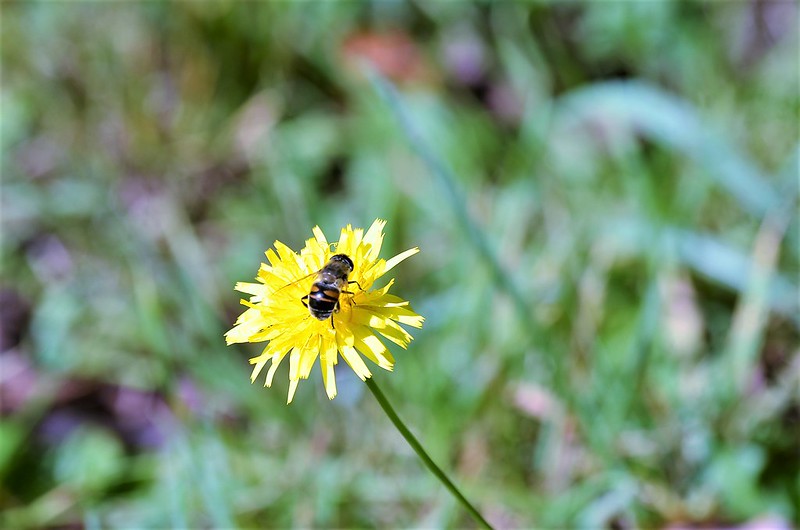 Even the simple flowers have their beauty. I almost said dandelion, but I think it is something else. 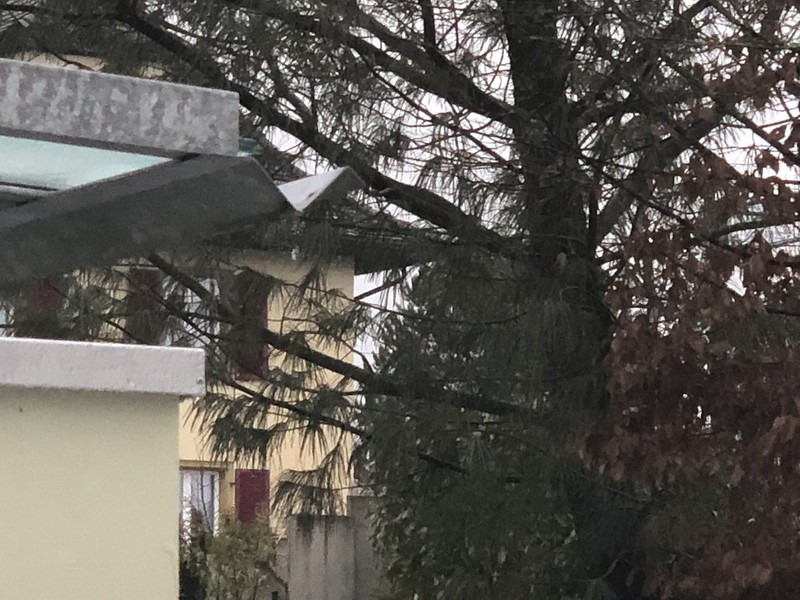 A wonder of modern building, at last our letters, newspapers and various unwantd advertising material will/should remain dry. When we bought the appartment and moved in, our mailbox was exposed to the elements. The postman only rings twice, and then only when he needs a signature or money, otherwise the post is stuffed into our mailbox at the entance to the appartment block. Each appartment has its own box. We soon noticed that without further protection we were getting newspapers with blurred print and wet envelopes.

As we are a democracy in our living zone, there was a meeting and Mr. Know-it-all-better had discovered the solution. We will now have a super enclosed entrance which would cost – quite a lot of money. It was put to the vote and we declined, not only we declined but one more than the half of us declined, meaning “no”. Mr. Know-it-All-Better found the crafty solution. “If we only had to pay half and the administration company would pay the rest”. This was agreed unanimously and so it came to pass that a protective glass roof was assembled. Unfortunately they forgot to insert a gutter as a rain catcher, and so it was a lot of money for all about nothing.

The post remained wet, perhaps not as wet as it used to be, just at the edges as there was now a glass roof covering it all, which also had to be kept clean now and again and should have made made just a few centimeters wider . When autumn arrived it was covered with leaves and other refuse that was a symptom of high winds.

This year we were 8 months under siege from builders that were renovating everything that could be renovated – almost. They forgot me, although according to Mr. Swiss we are both now past renovatition.

One of the last duties to be performed with this mammoth renewal was to replace this wannabe letter box protection as it had been removed during the 8 months of attack. And so it came to pass that one of the last duties performed was the cover. Again a glass roof, and it all looked very similar until I noticed that a metal gutter had been added at the edge, and it seems to work. I just took a photo and you can see a drip at the edge of the gutter. Actually it is now constantly dripping as we have rain after the snow. Is this the solution? We are almost there, although I am suspicious. Mr. Know-It-All-Better lives in the next appartment block with an indentical entrace to ours with the letter boxes. However, he decided, with agreement of his block neighbours, that this glass covered wonder will not be replaced.

I now hope sincerely that it will rain on his /letter box and his newspapers will disintegrate by every page turn. May mushrooms grow on the surface. 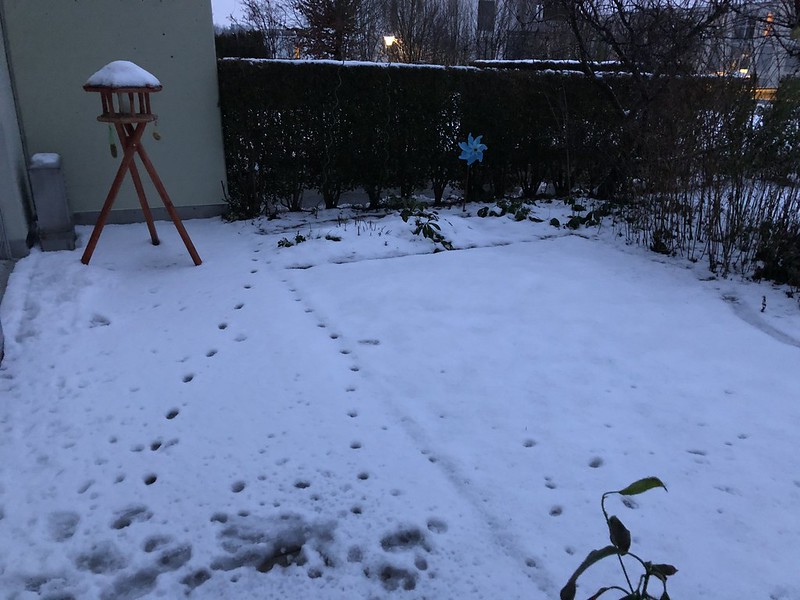 It’s a cold damp morning. Yesterday evening it began to snow and this morning it had already started to thaw. The mysterious pawprints have appeared again in my garden, but this time on the back porch. According to research made in Internet from the last appearance, it is probably a stray dog, although dogs do not go on a walkabout in gardens at midnight. Cats might, but they are not usually lovers of snow. Yesterday evening late I heard a few curious thumps outside, but assumed it might be falling snow from a top balcony. I now suspect that a fox might be prowling around now and again looking for something to eat. We have wild deer in the forest across the road, but you do not often see them and they are too far away.

Perhaps I have triffids in the garden going for a hop now and again, the although the garden is quite bare at the moment. 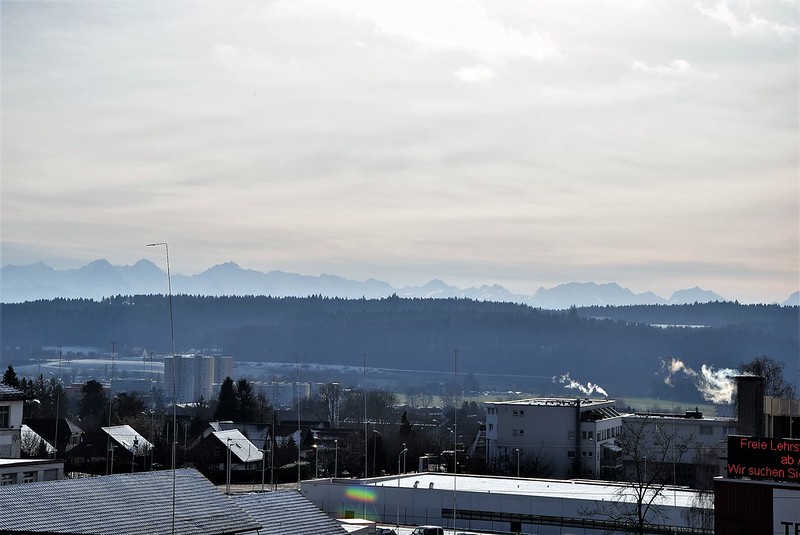 Yesterday was an alp-view day and I took this photo from the top floor of the parking lot showing the peaks of the Bernese Overland. The three high peaks on the left are Eiger, Mönch and Jungfrau.

We managed to get our New Year’s holiday shopping done yesterday when I realised that we forgot the bread for the evening. No. 1 son was going into town in the afternoon, so he was told to bring home bread. An hour later he called us on his mobile phone for an update, telling us that our usual preferred store had no bread, everything sold out. He then moved on to another store and eventually found fresh bread. Mr. Swiss will be going for a few bits and pieces this morning and I am continually adding stuff to the new list before I forget it. 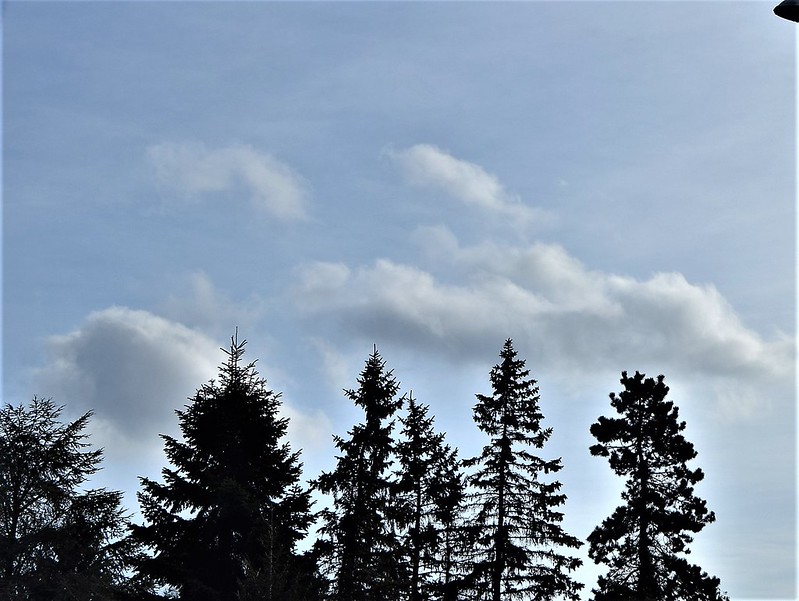 I was going to go on a practice run with my new wheelchair yesterday afternoon, but I was not feeling up to it, so decided instead to practice a few manoevres in the appartment. I felt like I was having driving lessons again. It is really not so easy steering a wheelchair, especially if you have a problem with right and left. Of course I know which side is which, but operating a wheelchair joystick can get confusing, especially in the backwards gear. Mr. Swiss was helping with instructions (in the german language) which confused me all the more. Eventually I managed to park the chair after having a few meetings with a chair and settee on the way. These are things that you take for granted when you see someone in a wheelchair, but everything has to be learnt. Steering a car was never easy for me. The instructor said the same rules and regulations for a pedestrian are to be applied to a wheelchair driver. I think when I hit the open spaces it should be easier with more room to turn. Mr. Swiss also tried it out as he said it cannot be so difficult. He changed his mind afterwards.

Today is a day of rest, and I will not really be going anywhere or doing things spectacular. There is a little bit of ironing to do, duvet covers, but to the tune of my iPad radio I will manage that as well. 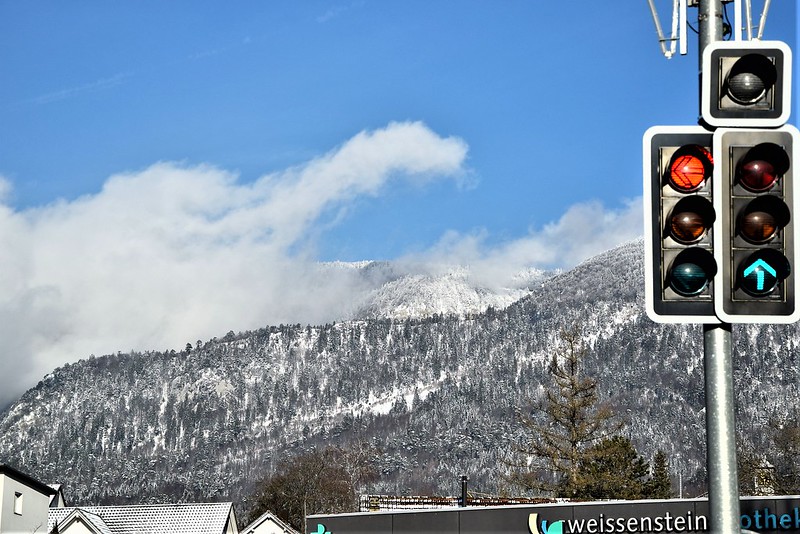 And now to move on when the light turns green. The Jura moutains had quite interesting cloud formations yesterday. Have a good day and make the most of it, it will soon be 2018. Everyone seems to be posting reviews of 2017, I cannot even remember what I did yesterday.