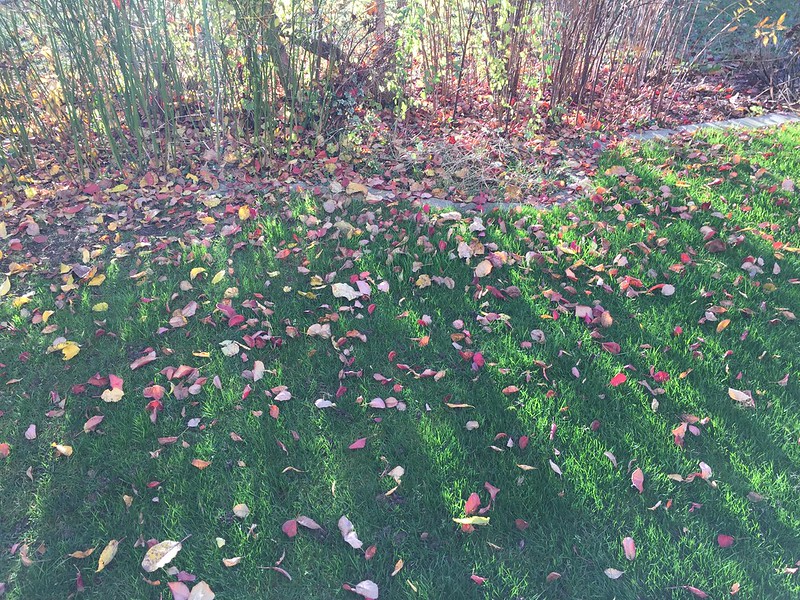 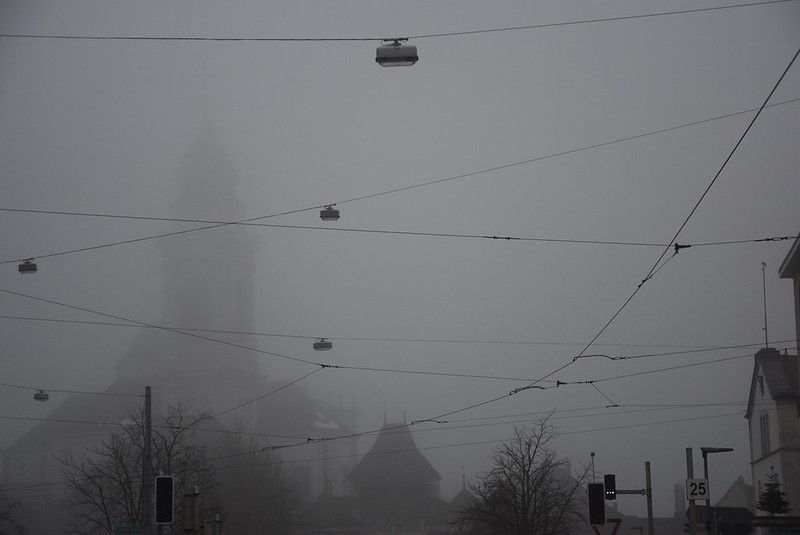 Some time in the night a couple of days ago magician tried to make our local cathedral disappear. There was only a faint outline left in the early morning. Would it disappear completely, or will it return? 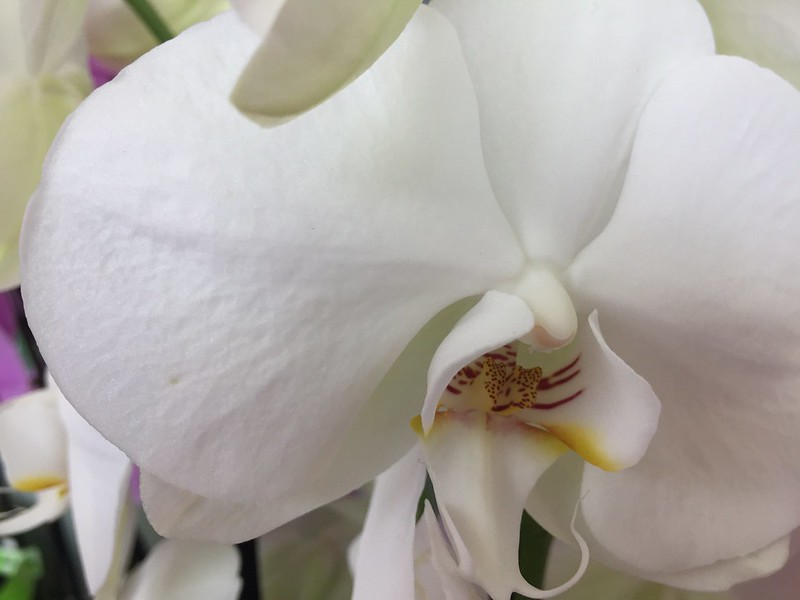 Orchids have such lovely details sometimes.

What caring thing are you going to do for yourself today? 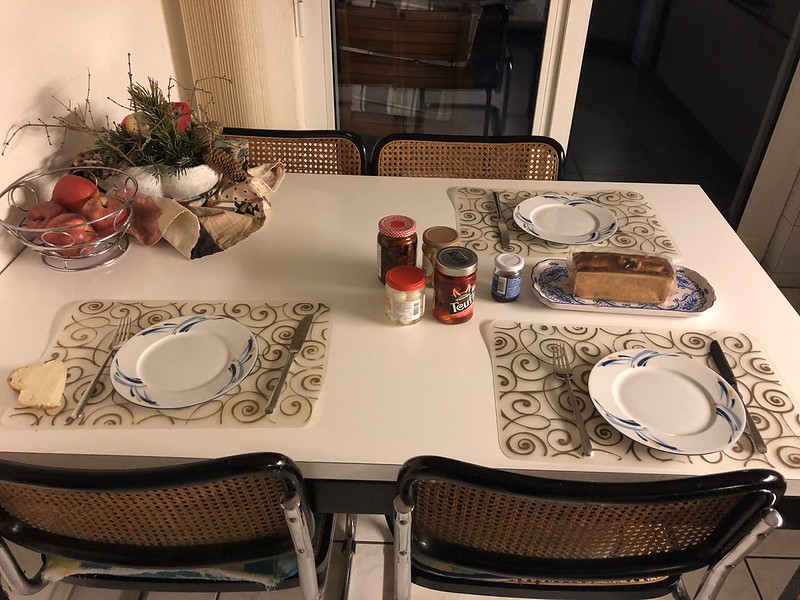 I can read a book, I have my computer to use when I want to. I care for myself every day, but I have Mr Swiss. We care for each other and whilst I was on my computer he prepared the evening meal, as always. We have been eating a little more lately for dinner, being Christmas and all that, so the evening meal is not a feast, but you eat with the eyes.

What can you always be found with?
A camera, perhaps a couple of lens and definitely my iPhone

What inspired you or what did you appreciate this past week?  Feel free to use a quote, a photo, a story, or even a combination.

I appreciated getting the mad time  of Christmas behind me and being able to relax at home at last. And I was happy that last year’s amaryllis flowered again this year: just one stalk up to now, but who knows if a second one will arrive. 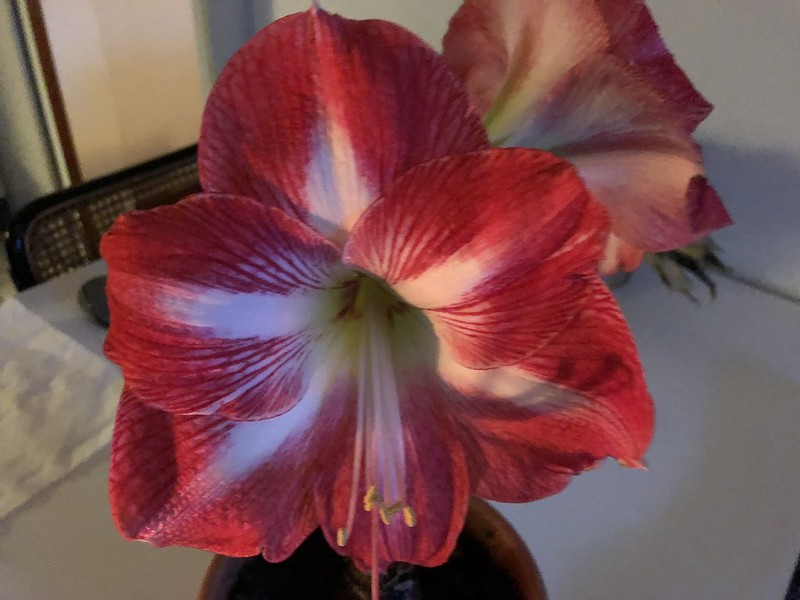 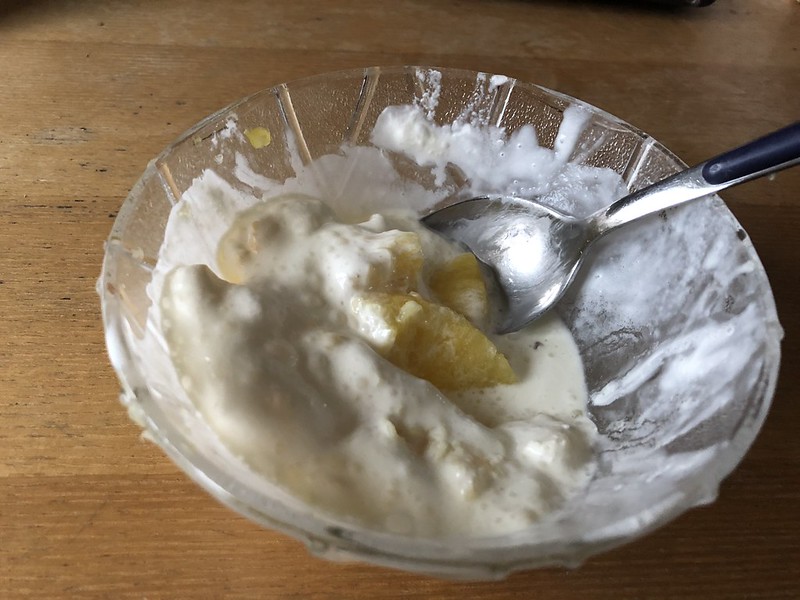 At the moment I am cherishing the fact that Mr. Swiss bought a pineapple, which I prepared with some sugar. I am now eating the remainder as yesteray I was not in the mood. 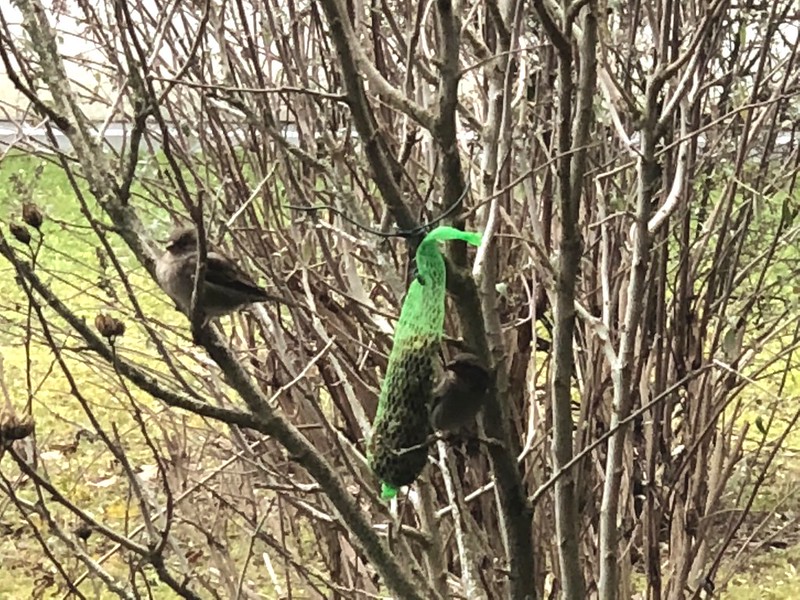 The sparrow population are also cherishing the fact that we hung a seed paket in the tree for some food privacy. Otherwise they would have to feed in the birdhouse with the other birds, and that is a fight for the best seed place.

And finally  I noticed that my neighbour had hung her seed offerings in her own designed bird feeder. It appeared the first time last year and is very original. 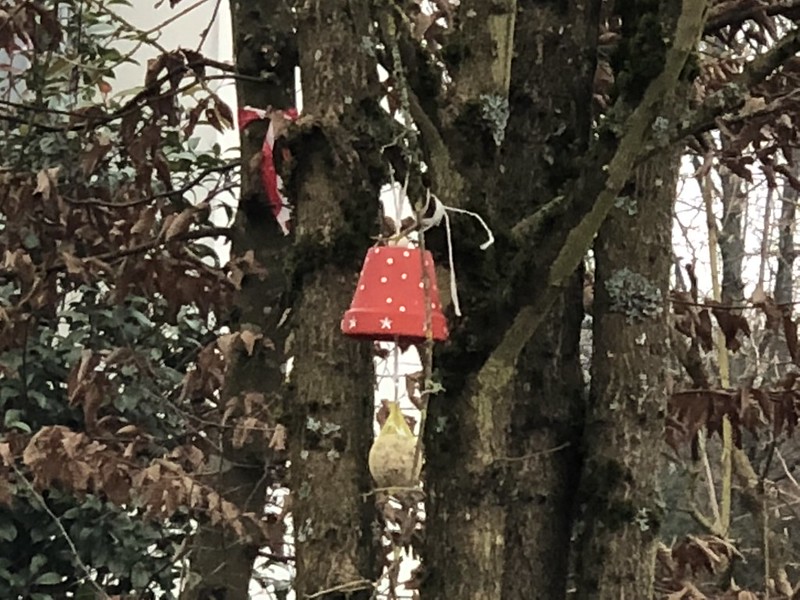 And I now really cherish my new iPhone X. I am now learning the ways of its camera and I must say it is very good. For the above photo I would usually have to use my DSLR camera to get so close, but I took this one with the iPhone camera, as the photo of the sparrows. I am now learning its ways and it has good possibilities. It can zoom up to 10x which is not bad for a phone and the picture quality is also quite good.

The iPhone also recognises my face. The phone is normally locked when i am not using it, but I just have to look at it when I switch it on and it recognises me. I know I sound like an advertisement for Apple iPhones and I must admit that when it arrived I found the whole show spiked with Walt Disney features. Now I am totally enthusiastic about it: a new toy that I can use.

So enough cherishing at the moment. Chrismas Eve has passed, today is Christmas Day and tomorrow the last day of the Christmas holiday. As a golden oldie every day is a holiday, although there are sometimes doctor’s appointments to be held and shopping to do. At the moment I am cooped up at home. Everything is closed down in Switzerland and there is no action. On the other hand I am now sitting comfortably at home surrounded by all sorts of cyber equipment to tell everyone about it which I really do cherish. I also have my Kindle for reading and in the living room I hear the sounds of a TV.

Yes I enjoy this cyber life, beats knitting any time. I am not the sentimental cherishing type of person, I just know what I like and I do like to spoil myself sometimes. 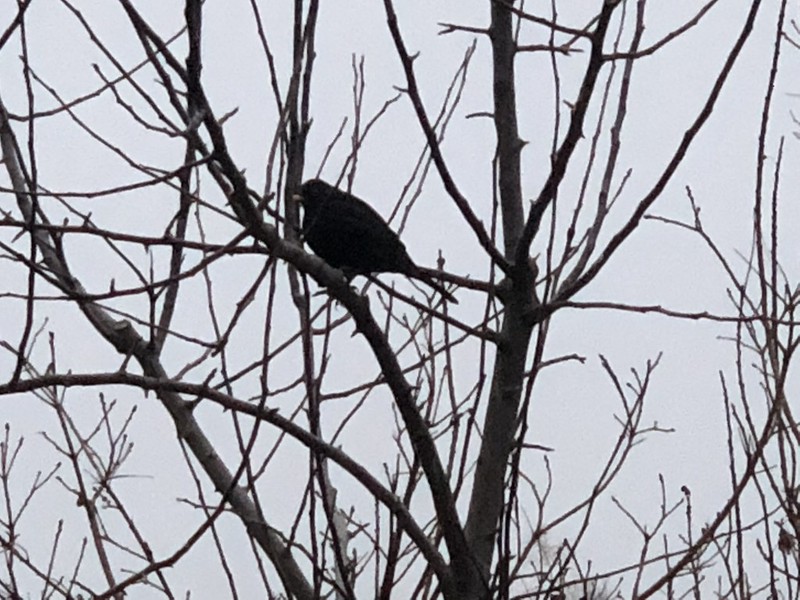 All I can offer for this morning is a lonely blackbird sitting on a tree in my garden. The grey skies are still here since three days. Clouds have disappeared. I noticed that my new mobile iPhone camera is much better than the old one. This blackbird would have been a speck in the distance with the previous mobile phone camera. I now seem to have my new iPhone X under control with all its bells and whistles.

I remember my Christmas Day at home in England when I was a kid. I would wake up to find a pillow case (a stocking would have been too small) on my bed full of various Christmas wishes. In those days there was no computer, so you had normal toys and nothing electronic. Afterwards there would be breakfast and during the morning mum would be cooking the turkey. When I was very young it would be a chicken, but even prosperity entered the East End of London and one day we had our first turkey. After dinner we would make ourselves ready to catch the last underground train of the day to my aunt who lived out in the wilds of Essex, Dagenham: although today it has become part of greater London. It was about an hour travel and when we arrived at the station had to take a half an hour walk to my aunt’s house as the bus had stopped running for Christmas. Even bus drivers deserved a Christmas at home I suppose. All my aunts, uncles, and cousins would come together for Christmas Day. There was another round of presents under the tree from the relations. First of all we would have tea, cold cuts etc. and there would be a dessert, usually fruit in jelly with custard in little wax forms. The kitchen was the realm of the aunts and they prepared it all together, smoking their way through the work. Cigarettes were part of life in those days. If you survived 5 years of was, they became part of life. We would all sit at the table, the whole clan, and there would be lively conversations.

After the great washing up session, again a communal work done by the women of the family, someone would be designated to “pick the tree” and we kids all got our presents to unpack. And then the festivities began. The same process every year, the same old records and the same songs sang by all.  They are memories of my Christmas. Somewhere on the way I lost any connection to Christmas, and today I enjoy taking it easy. We all get older.

I kept myself busy yesterday by reading a new book, one of those German classics I had wanted to read for some time, by Joseph Roth. I am reading it in original German. It is the “Radetsky March” and is about a family dynastiy from the Battle of Solferino which took place in 1859 where the Mr. von Trotta rescued the Kaiser of Austria from a bullet on the battlefield and was rewarded with promotion etc. Afterwards the story traces the family von Trotta and its development through a couple of generations. I had seen the film a few years ago, and Mr. Swiss is watching it again. However, I decided to read the book. I quite like Joseph Roth books. The book is also available in an English translation.

Otherwise I am not going anywhere or doing anything in particular. There is no action in my part of the world. I am even hoovering now and again to break the boredom. 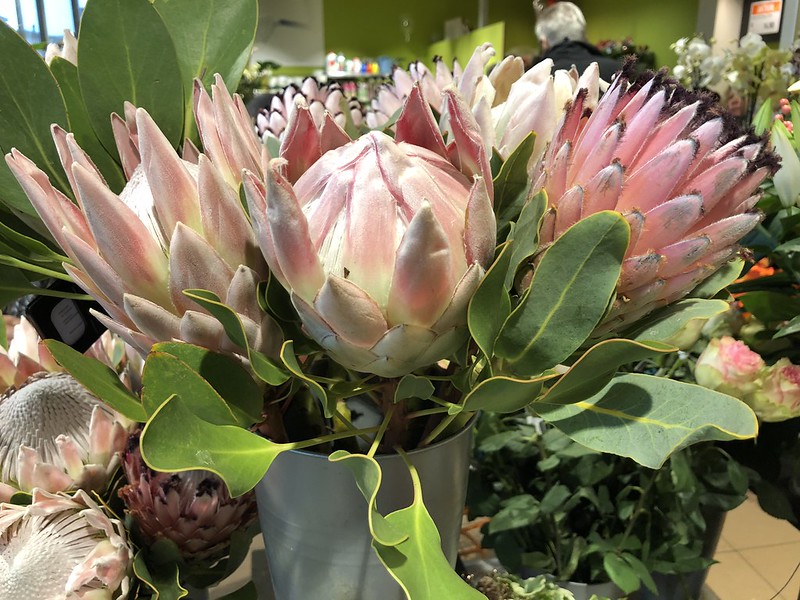 And that is all I have to report today. I think we are the only people at home in our small appartent house today.

I leave you with a group photo of my favourite flower, the protea and wish you a good rest to the holidays.