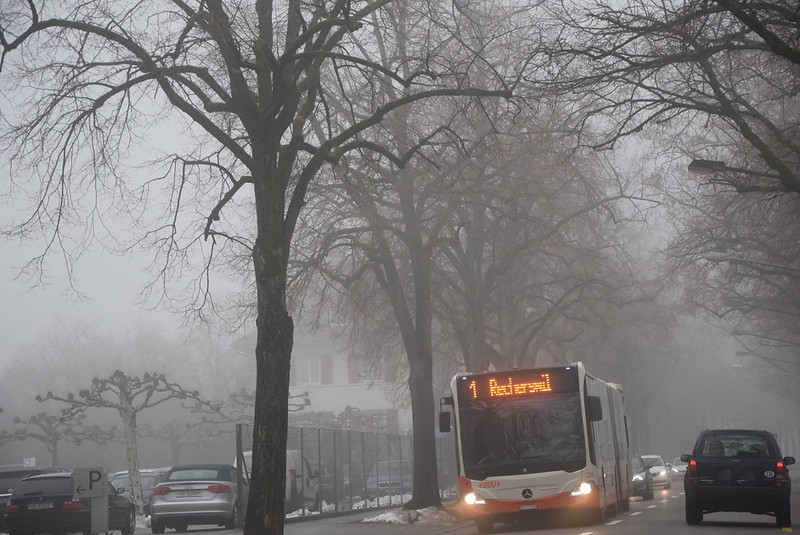 Yesterday we were shrouded in mist, or was it fog. After the snow day which disapeared after another day, the mist began to rise from the river . Undaunted we made our way to the big shopping tour yesterday. The first surprise, an expected surprise, was that the park house shows two big zeros for the available parking space. Family Angloswiss were prepared and the idea was that I would leave a brave Mr. Swiss to go on the quest for an empty space, whilst I would depart on the shopping safari. We were lucky, just as we entered the parking lot a car drew out in front of ours and so we claimed the space before war broke out for the last parking place.

The next expected surprise was that the local population decided to do their Christmas shopping on this Friday. I had ordered my meat and arrived at the counter with Mr. Swiss. The idea was that Mr. Swiss would get the ordered meat and I would go on a walkabout for everything else. However, Mr. Swiss decided he could quickly get this and that and I was left standing at the meat counter. A friendly salesman said he would get my ordered meat and asked if it was fondue chinoise. He was disappointed when I said no. Everyone these days makes a fondue chinoise on Christmas Eve it seems. It is finely sliced meat which you spear on a special fork and dip into a fondue pot filled with boiling bouillon until it is cooked after a minute. You then dip it into a sauce of your liking and eat it. The advantage is that the housewife does not have to cook anything as it is cooked at the table.

Mr. Swiss suddenly returned from his bits and pieces and I told him to wait for the ordered meat and I wandered further. I met a friend with his wife and he said proudly they had been buying stuff through the last month so that they did not have so much at the last minute and were only in the store for the veg and other perishables. We had actually the same plan, but I still had a three page list on my iPhone to buy.

After Mr. Swiss got the meat I told him to rest on a bench (backache) and I did the rest whilst he traced my movements on the iPhone according to what I deleted from the list. I was soon finished as doing the job on my own avoided lengthy problematic discussions with Mr. Swiss. We met at the cash desk, I paid and he packed and we were away. I breathed a sigh of relief when we got home and waved goodbye to Mr. Swiss as he had an appointment at the hospital for his second back injection. After half an hour he was home again and it was lunch time. My No. 1 son was absent for lunch, as he was having a Christmas dinner at work. He was away again in the evening for a Christmas concert (rock music). I can now begin to relax knowing that we will be fed during the Christmas days and there will be only a few items to get today which Mr. Swiss will deal with.

Is this really the spirit of Christmas? No it is not, it is commercialism pure. 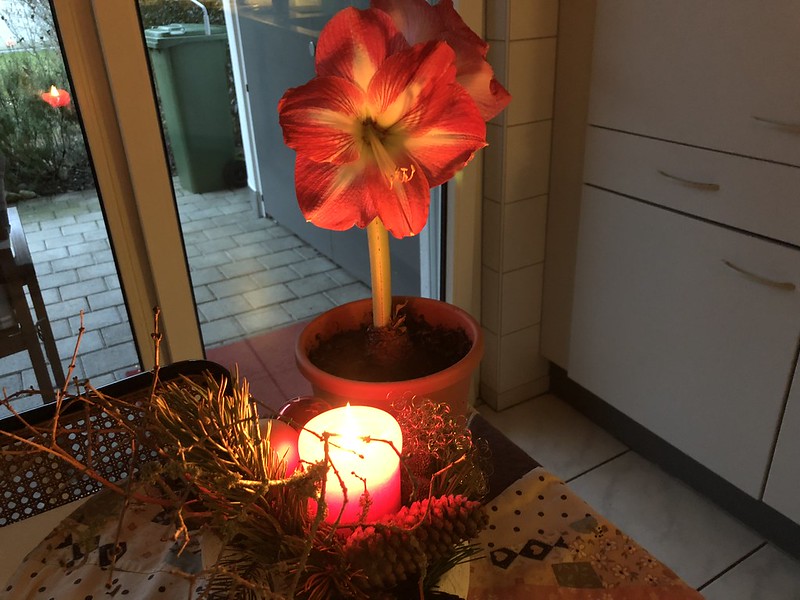 I am especially pleased with my amaryllis. This is the one I managed to revive for a second flowering session this year. I bought it a year ago when it flowered. I thought I was going to lose it. I have a couple of amaryllis which are growing, but this one seemed to have got infested with so-called little flies known as gnats. They would gather on the tiled floor next to the window and I would sweep them away with my mop. There is no big cure it seems. You can put down a bowl of fruit vineagar which attracts them to a wet grave, or the ultimate being repotting. I gave up. I had a look in Internet where it did say their life expectancy was about a week. Anyhow yesterday I had to give my amaryllis water and I put this one, which seemed to be the main culprit, outside in the cold air for an hour. Either the plant would die, with its gnats or not.

I do not know whether I found the secret gnat demolition tool, but since yesterday I have not seen a single gnat anywhere in my home. They have disappeared (or breeding for the next generation?). At the moment I am satisfied and my amaryllis flowers on. It did lose a large bud in the process, but is making good. I noticed that the stalk is not so long as last year, but it is a neat plant. I am wondering if I will get a second bud appearing as they usually do.

And now to move on to more valuable items, such as taking my vacuum cleaner for a walk, with a mop, and cooking lunch. I am sure you are all now busy celebrating the Christmas stress – Mr. Swiss says I should not be so miserable about Christmas, but he is a man, they see things differently.

I will leave you with a Christmas tree, not mine but one from the supermarket. Christmas trees are not my thing, and I live on the edge of a fir tree forest. 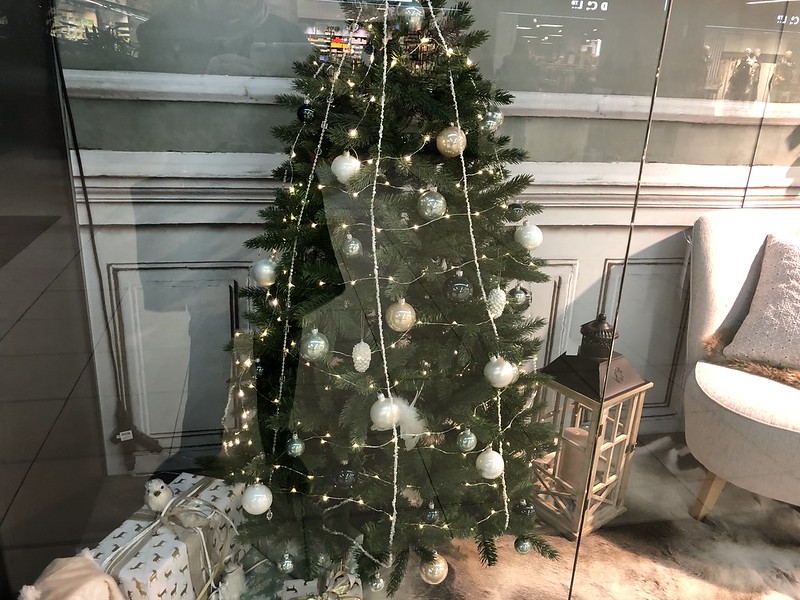