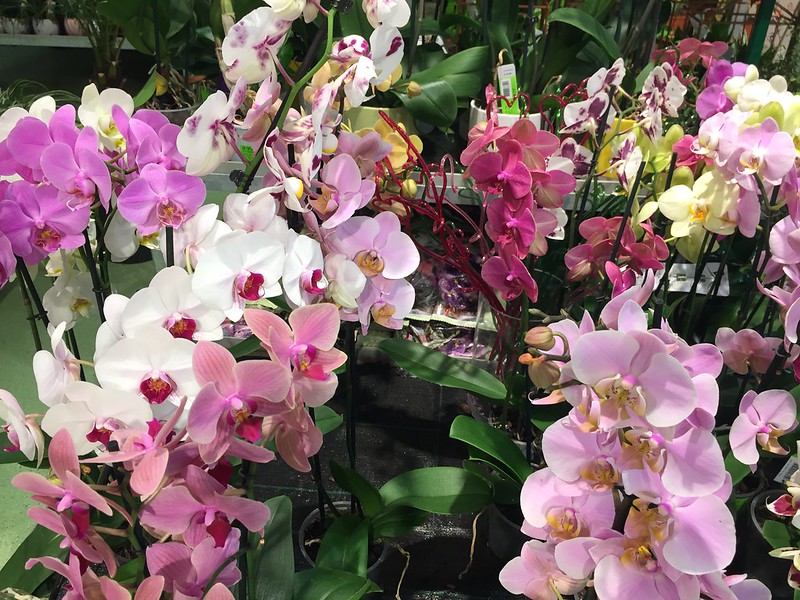 This time a forest of orchids, they are really a good plant to have at home. They live long and are no problem to keep. The are also quite reasonable in price. 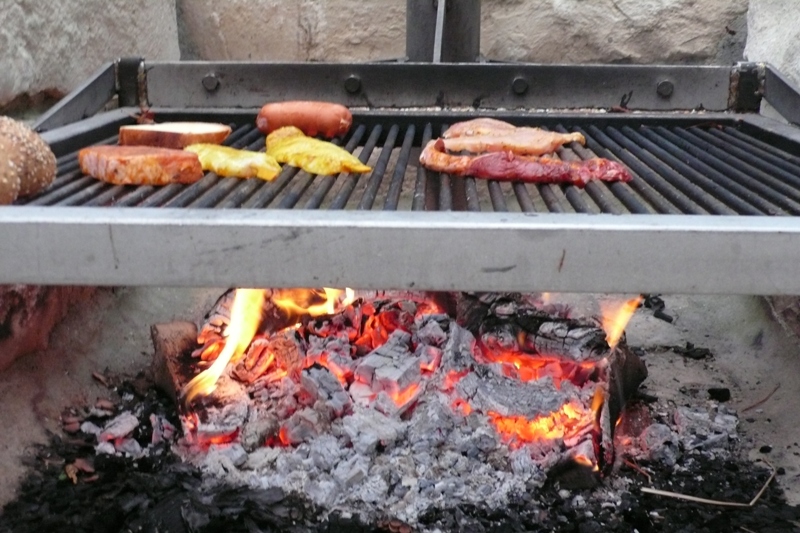 A b-b-Q with my local first aid group. 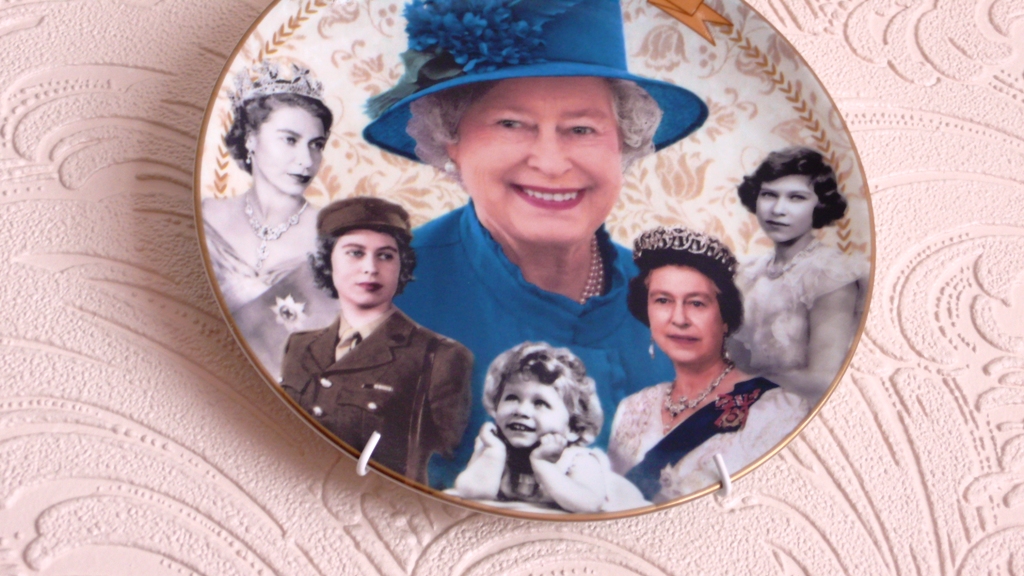 Seen at a friend’s house in London, England hanging on the wall. Queen Elizabeth II of England on a commerative plate. 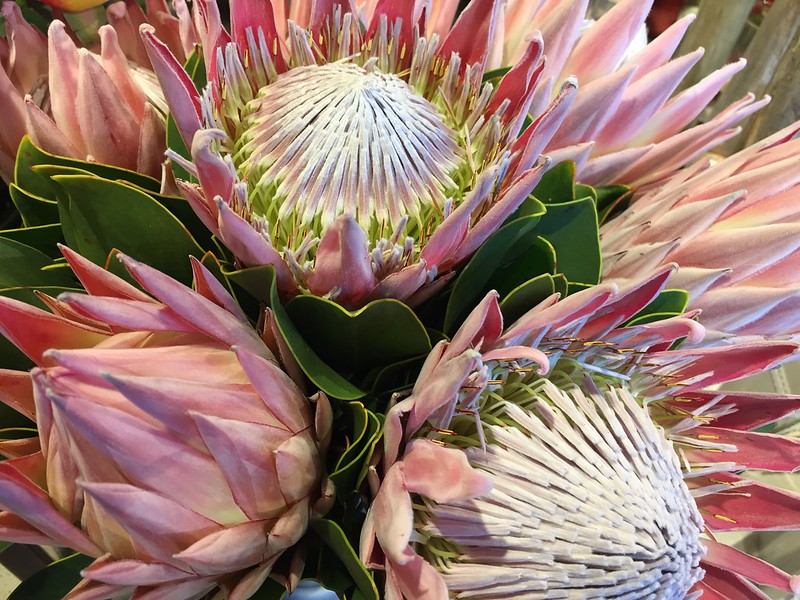 A bouquet of Protea. 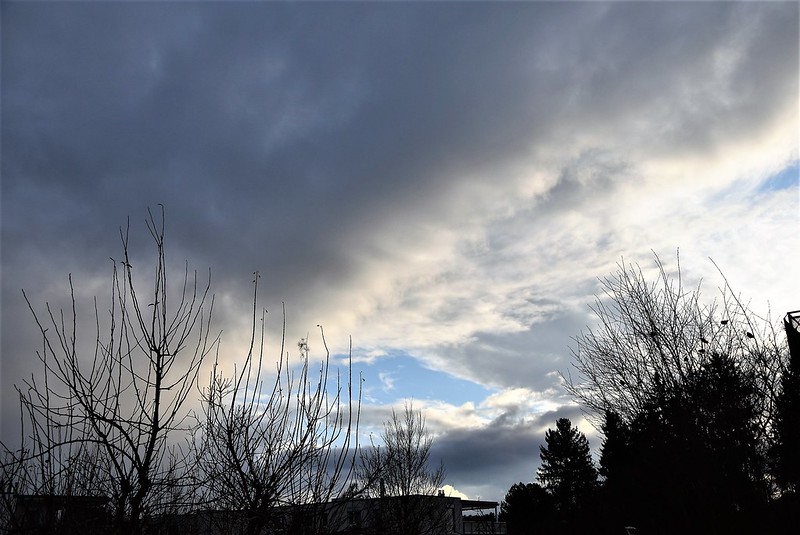 I am not going to confuse you with theory behind this cloud formation which I just saw outside, because I do not have a theory. This morning it snowed, the sun has arrived and the clouds are breaking up. I am sure a metorologist has a theory for this.

My school years were full of theories. It seems that many greek mathematicians had nothing better to do all day than discover the reason why, how and work it all out. We were afterwards punished by writing it all down and learning all about it. Pythagoras must have been a boring guy when all he had to do was stare at a right angled triangle all day and discover stuff about the square of the hypotenuse is equal to the sum of the squares of the other two sides. I am sure Mrs. Pythagoras must have been annoyed whilst she was slaving with polishing the concrete pillars supporting her home and Pythagoras was just chiseling away at triangles.

Of course life is full of theories, but who cares. I do my own thing and if I have a bath, do not spend time on working out how much water is displaced. Mrs. Archimides had another problem. Whilst she was endeavouring to wipe up the mess on the marble floor of her greek home, her husband insisted she collect the water in a greek urn so that he could work out how much water his body had displaced in the bath.

Today I discovered a new theory, that if you leave a few pieces of vegetable at the bottom of the fridge in a compartment and forget they were there, eventually they have to be thrown away due to conversion into a soft matter, especially the remaining piece of cucumber that had hidden itself behind a tomato which also began to deteriorate. Vegetable matter tends to convert itself into a semi liquid state if overlooked, coupled with the fact that they might even begin to develop strange bursts of natural plants – like go mouldy.

But why bother with theories. All I have to say on this subject is Q.E.D. , which was to be proven. I hope I have not bored you with my theories. I am now still working on a world changing theory. What arrived first, the chicken or the egg? 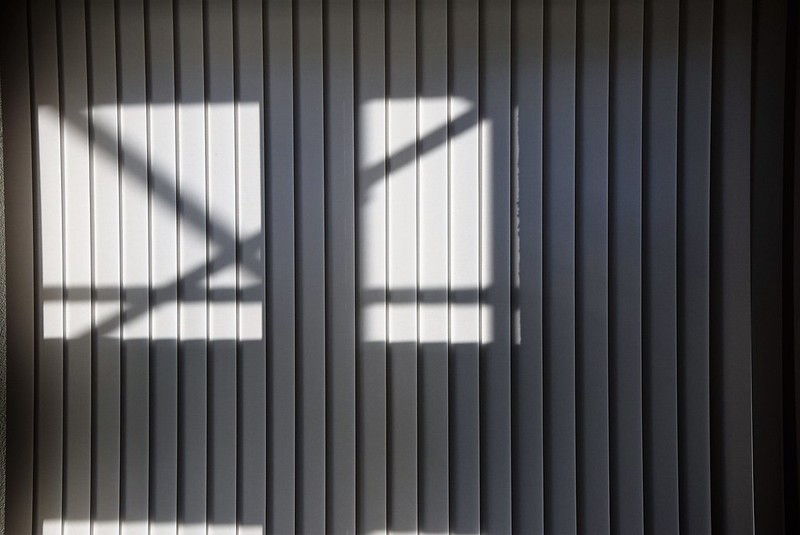 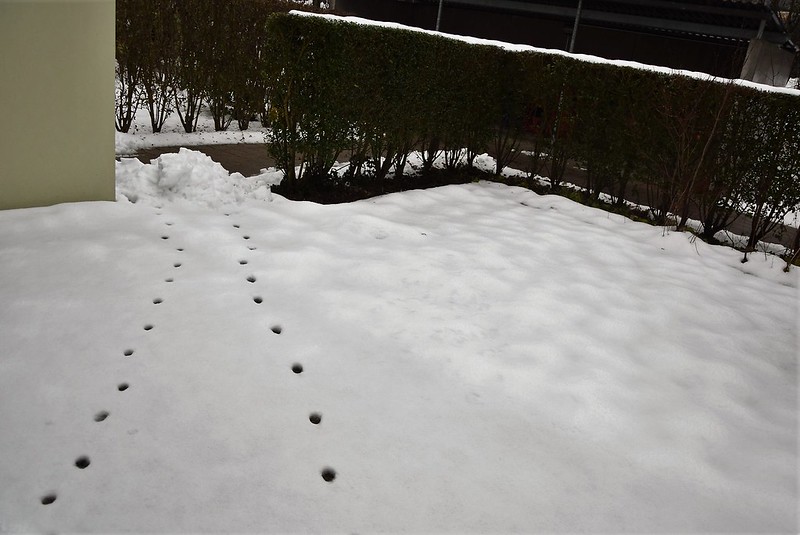 What walks on two small round feet, or paws, spaced wide apart? Or what is the origin of these footprints in the snow in my garden. I am still trying to work that one out. They are not human, otherwise we would have the imprint of a shoe sole. It could be cat, but they walk on four paws and there legs are not so wide apart. Of course it could be two way traffic, coming and going. Perhaps we have triffids in the area that tend to walk on one strong root. I will have to ask the neighbours if they have seen any suspicious movements. Whatever it was, it was in my garden, took a walk around my potted horse chestnut tree and left afterwards.

In the meanwhile the snow has almost melted away. It began to rain and yesterday it got warmer. This morning the garden just has a few patches of snow here and there. 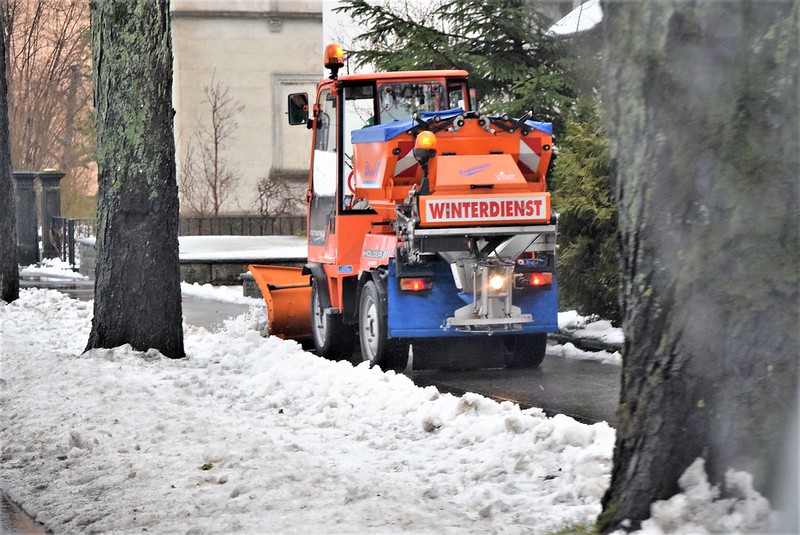 On our trip to the store yesterday morning I notice the local street cleaners were on their way removing the snow from the pavements. “Winterdienst” means winter service, so we are in good hands. Even the parking space at the supermarket was clear with no dangerous looking patches of half melted ice, although Mr. Swiss did get a little nervous when I left the car, propped up my walking cane on the door and took out my camera from my bag to make a photo of the surroundings. There was nothing really special to see as the houses were in the way, but the sky had a curious band of white in it. 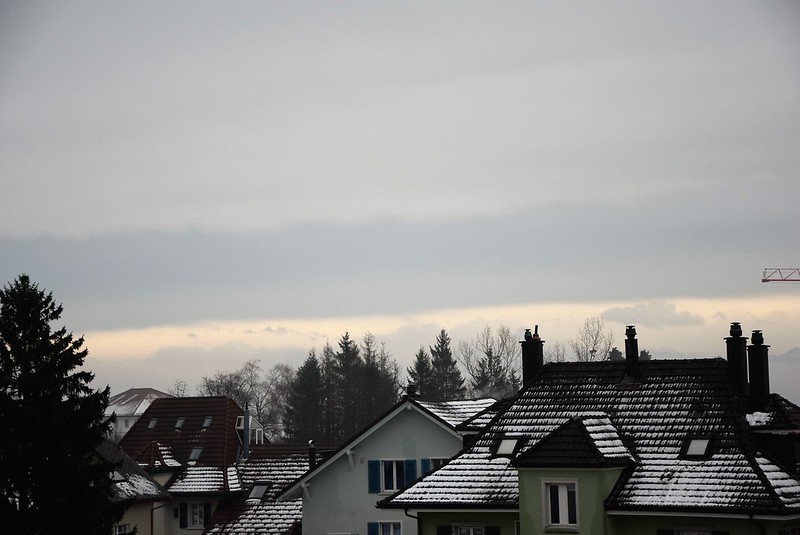 I think age must be catching up on me. This morning I read an article that you are no longer with the modern times if you use Facebook. Facebook has become the happy hunting grounds of the golden oldies, and those that are becoming golden oldies. The youngsters have forsaken this nice little corner of the Internet for things like Snapchat, Instagram and Whatsap. I now feel old fashioned, no longer in. I have begun to feel at home in Facebook. Basically I only crosspost my WordPress stuff and might make a few comments on posts.

I enjoy the groups they have. I belong to almost every group from the various areas of East London, where the cockneys hang around. I joined my old school site and basically I have fun. Lately I discovered a site “Barking and Dagenham, days gone by”. I never actually lived in the area myself, but my mum’s family all moved out there when their houses were demolished in the East End due to slum clearance. Mum and dad also moved there when their house also met the same fate, so everyone was together in a new place. I knew the area and have many connections. I happened to post something this week and got some interesting answers with old/new contacts of neighbours from the East End from my childhood days that lived in the same street as I did. That is my kind of Facebook, not showing what I am cooking for Christmas, or photos of family gatherings.

On the other hand, I did try Whatsapp at the recommendation of son No. 2, but hopped out of it after a day because I could not see the point of it. I communicate mostly with the Facebook messenger. It is cheap, good and you can post photos, everything staying private.

I tried Instagram once, which is mainly photos, but decided it does nothing for me. I am more at home in WordPress. As for Snapchat, that would have far too much stress for a golden oldie like me. Things that disappear after a few minutes. I would probably not even know what was there. This is the place for those that use their mobiles as a sixth finger on the hand. Unfortunately I now realise I am getting too old for the cyber world. I am comfortable in Facebook, because I can take it or leave it. 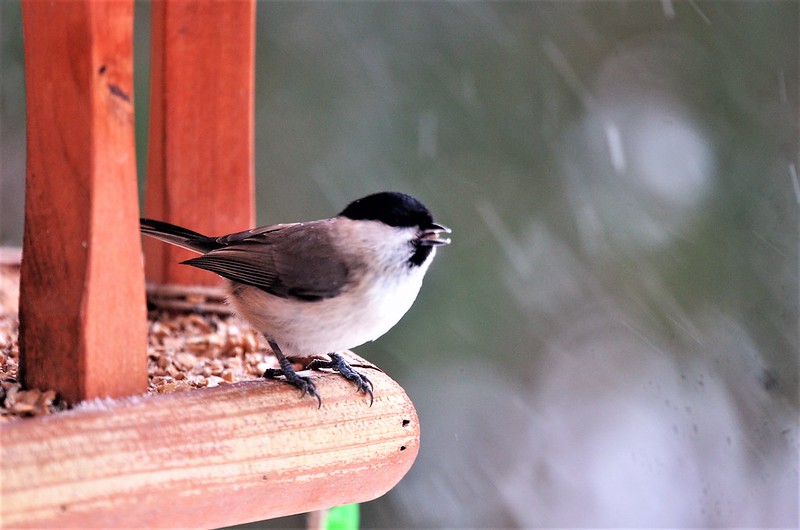 I am now off to clean a bathroom amongst other things, but will be back. Enjoy the day, take care of your computers, they will need you.