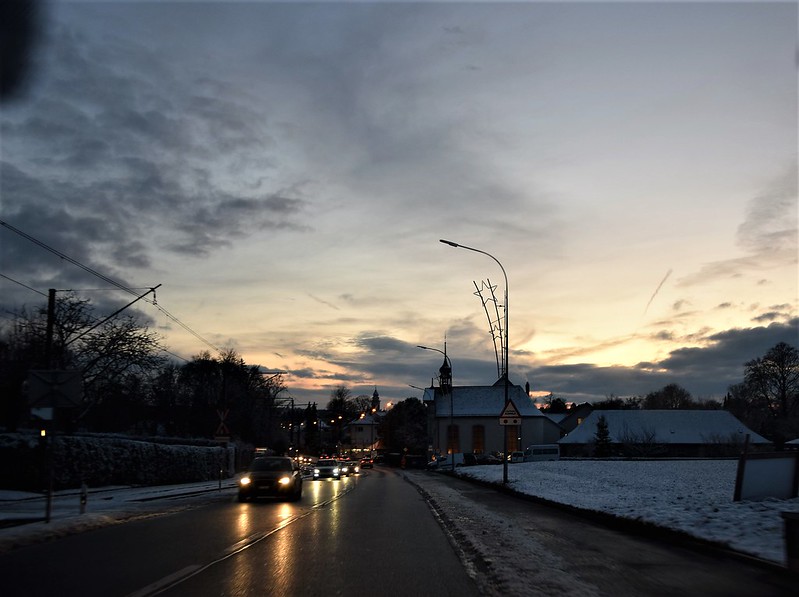 A journey into town in the early evening. 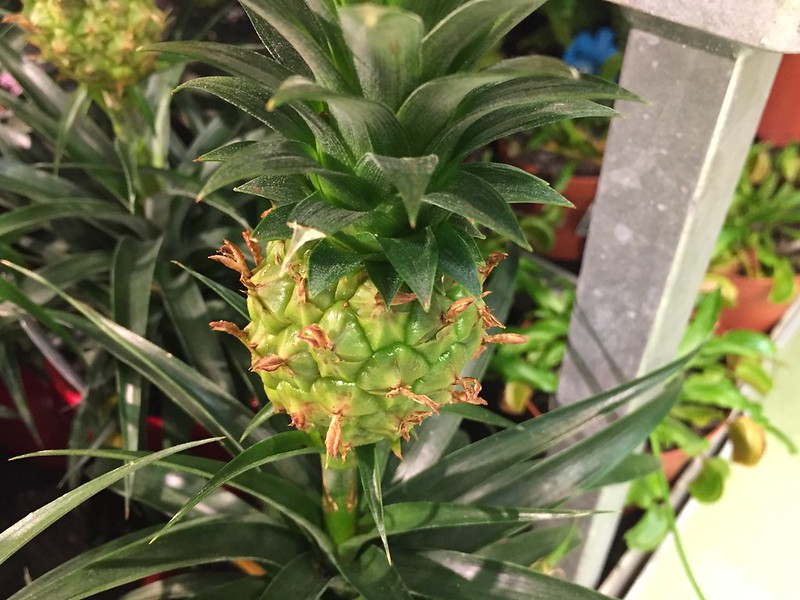 This would probably be better entitled as “Fruit of the day”. I suppose pineapples must have a flower, but I have never seen one. It is possible to grow your own if you have the patience. Apparently you cut off the top of a pineapple and place it in earth and it should grow. Mine never did, but I did not have the patience. I saw this one growing in the local store. I suppose the brown dry bits on the fruit sections would have been the flowers.

Who says that these figures are not elegant. In their world of star wars they were the latest trend and why, because they were all dressed the same. They had to wear protective clothing. No-one had to be ashamed that they were out of place, they melted in with the others, which is what we all basically want.

Ok, we do not walk around looking like Darth Vader from starwars, but if you went shopping with high heels, a tailored costume and perhaps a fur coat on top of it all when in Winter, you definitely would be noticed. People might even have a quiet giggle behind your back, unless you were attending a wedding. Even on party invitations today there is often the little sentence at the end “casual clothing required” which leaves many open questions. It means that the men do not reqired a tie and the ladies can dress in comfortable trousers,with a blouse or a t-shirt in modern design. If the weather is not so warm, then you can even wear a hoodie. Just make sure that the basics are in black, or something that matches the blue jeans you are wearing.

When you venture into the street dressed in blue jeans, a zip up quilted jacket preferably in black and of course sneakers on your feet you will not be laughed at, you will melt in with the crowd and that is basically what most of us want. The fur coat has been replaced by the quilted jackets, they are warm and comfortable.

Being a golden oldie I never really go anywhere that requires elegance. I go to supermarkets and we all dress the same. Trousers, jacket, sneakers or perhaps boots in Winter. Elegance for me does not come into the question, but comfort. A big plus in summer is the loose fitting dress. The one that does not have a waistline, but floats in the fresh air, as colourful as possile. You might look a little overweight, but why hide it, you are overweight.

I no longer want elegance, I just want to fit in with the crowd, which eveyone else also seems to be doing. The days of George Orwell have now arrived. Dress as the others do, and you will not be noticed and who wants to be noticed. Of course if you happen to be wearing designer jeans or a t-shirt it does help. For that you will be admired. Even daily appearances have their touch of elegance when people notice that you have not bought the t-shirt in a special offer in the local store. 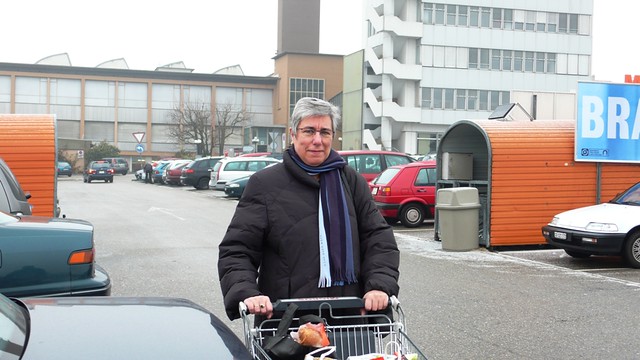 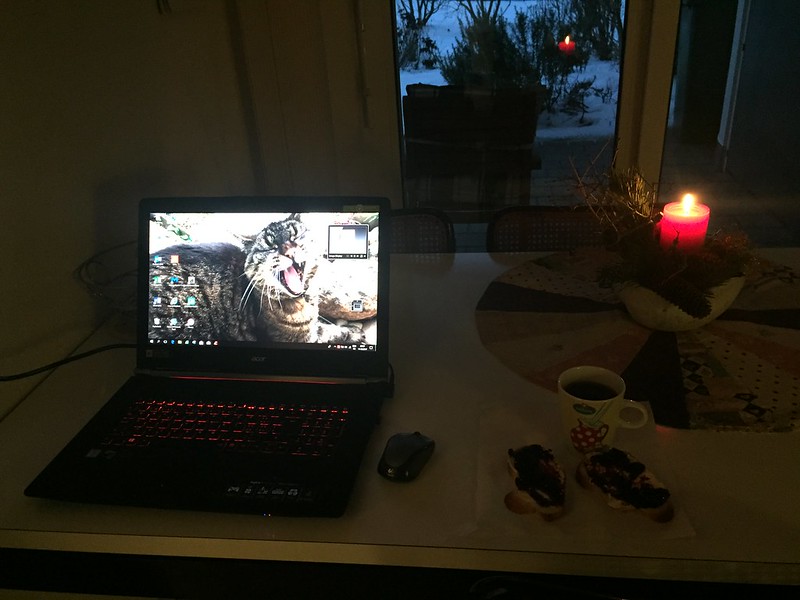 It’s begining to look a lot like Christmas, thanks to the wonderful advent arrangement my daughter-in-law made. It certainly brightens up my breakfast table. What would a breakfast arrangement be without decoration and, of course, a computer. You can now imagine me sitting at the table and writing this Good Morning greeting.

Oh, by the way, it snowed yesterday, altmost all day. Even my online collegue near Boston in the States said she had a helping of the white stuff. It seems to be international at the moment. My friend in England wrote that they were planning on a excursion to a friend, but called it off due to the snow. England was always a problem if it snowed. It only happens once in a blue moon, and when it happens everything comes to a standstill. They are more used to the rain. 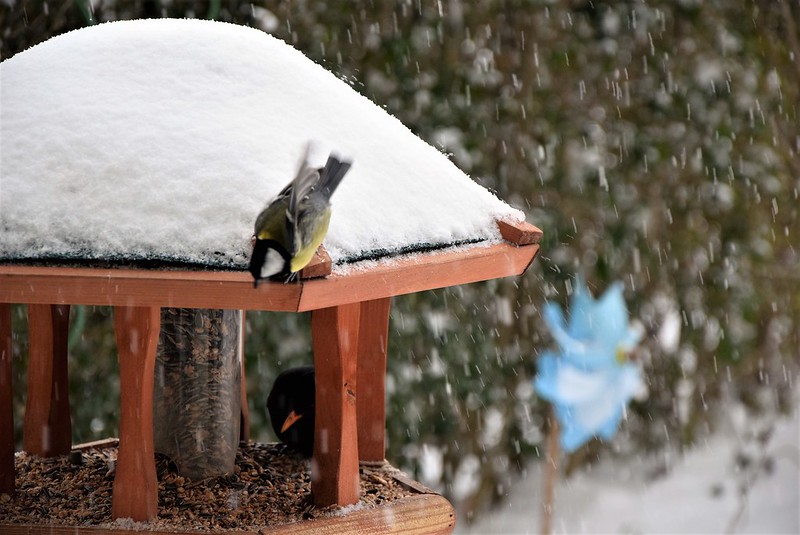 The garden birds made the most of the bird house. Even the blackbird arrived in the house for food. He usually pecks around on the ground, but yesterday he decided to fly up to the penthouse suite. The great tit got curious as if to say “what is that bird doing here”. We noticed over the last week that the birds had lost interest in the food, but yesterday we had to do a refill twice. Snow seems to make them hungry. 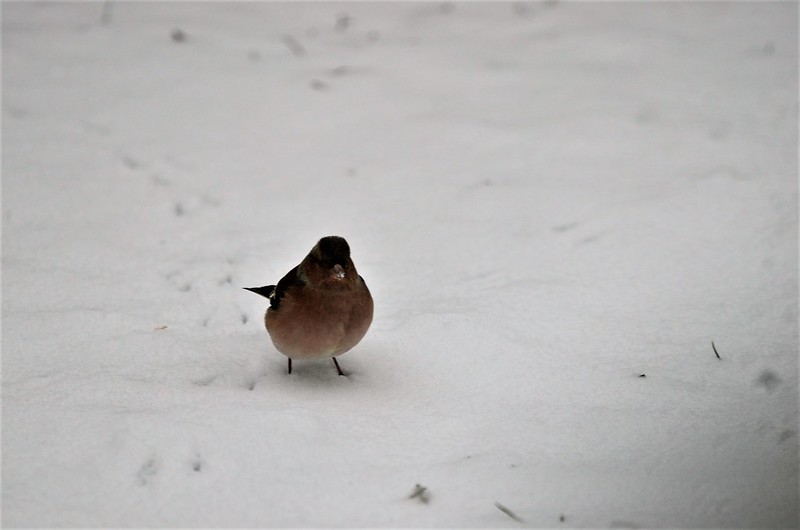 I even managed to get a shot of a robin, although I think it is a robin. It could also be a finch as Mr. Swiss tells me some also have a red breast. Anyhow it was something completely different. They are shy birds and do not often mix with the others, but when the seed bar is open they are also amongst the customers. 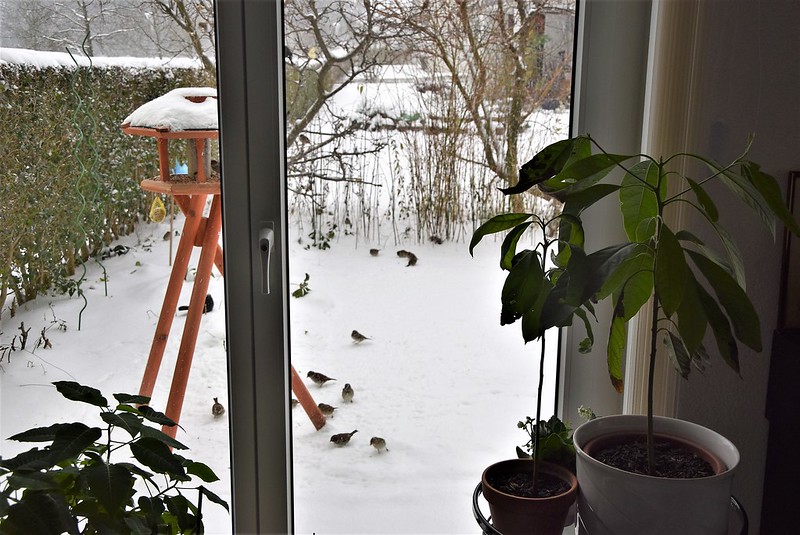 I had a grandstand place through the window and was snapping away all morning. In the second half of the afternoon it began to rain a little and afterwards temperatures dropped to below 0°C, meaning there would be a skidding adventure on the roads. Thank goodness we did not have to go anywhere, but could take it easy at home.

Today we have to venture out into the great unknown. We usually depart around 10.00 am and hope that by that time the local authorities would have done their duty and cleared and salted the roads to make it easier to drive. At the moment temperatures have climbed, just over freezing point, so it should not be too bad.

And now to move on, there are places to go (the apartment) and things to do (hoovering). Never a dull or boring moment if you are a golden oldie. Have fun, do not walk on the ice but keep to the safe dry places and have a nice day if possible. I know if I was part of the work force again I would not have a nice day. It would begin with skidding to work in the car and concentrating on your duty. It was nice while it lasted, but even better that it is now over. I am my own boss and do my thing. The state even pays me for the work, although you don’t get an annual rise and have to make do with what you get.

And the birds look on. 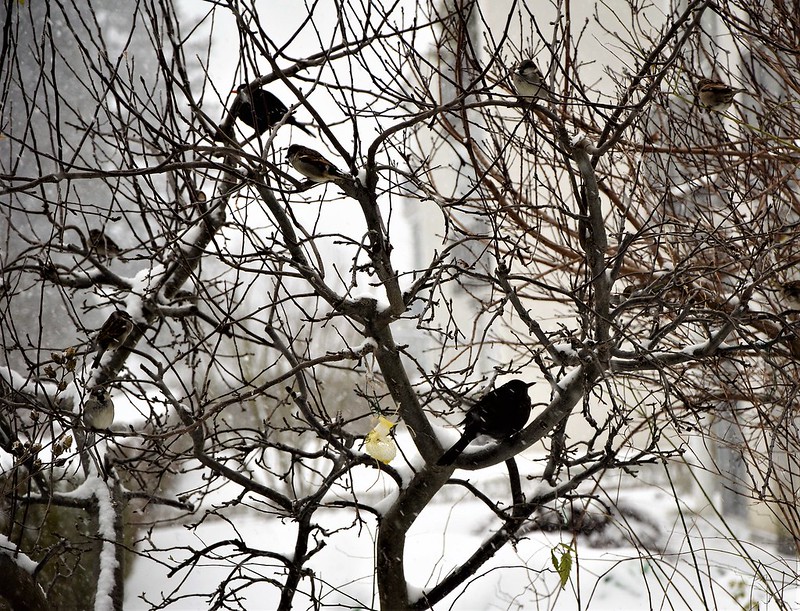