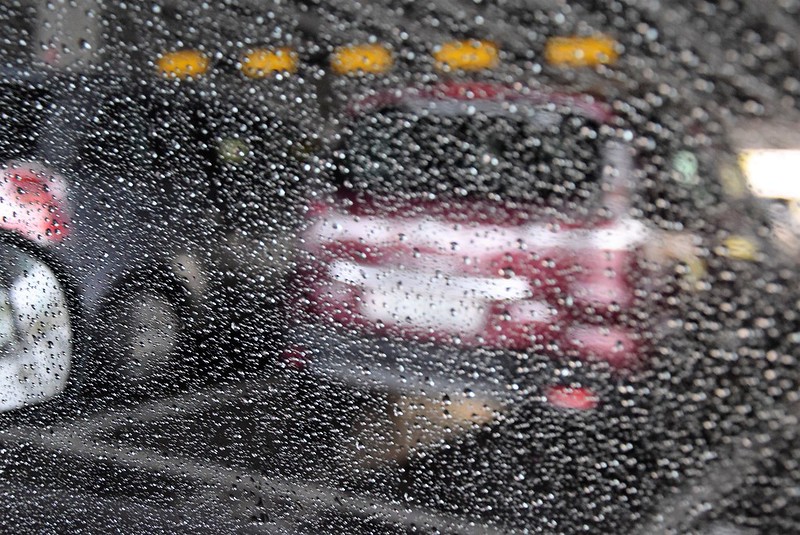 It does not get wetter than this, but sitting in the car you keep nice and dry as you enter the parking house at the local supermarket. 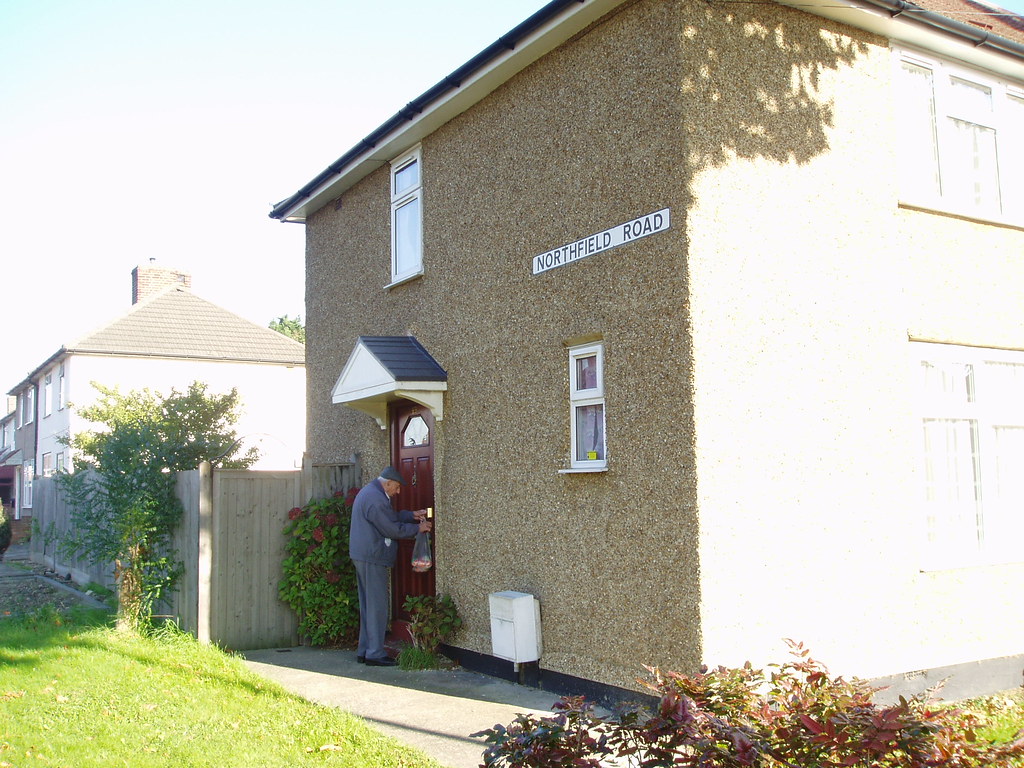 It was in 2006, 11 years ago. I was in England visiting my dad who was then 90 years old. I took the photo as he was unlocking the door of his house. Unlocking doors in London houses is not easy, especially if you live in an area where break-ins are not rare and so you have many ways of locking the door. Even the windows had locks on them. I must admit when I stayed with him I always had problems, but he had everything under control.

Funny thing is that I grew up in a “rough” part of London, Bethnal Green, the East End, home of the gangster family Kray. Of course we locked the doors to our old houses, although there was nothing really worth stealing, but the door was usually open during the day. I would be outside playing in the street or the women in the street might be standing on the door steps watching the world go by and having conversations. Today we live in a world of locks and keys.

A fond memory of dad when he was still living in his house. Note the cap on the head, it is general working class uniform. Even my husband, Mr. Swiss, wears one to keep his ears warm and that is in Switzerland. 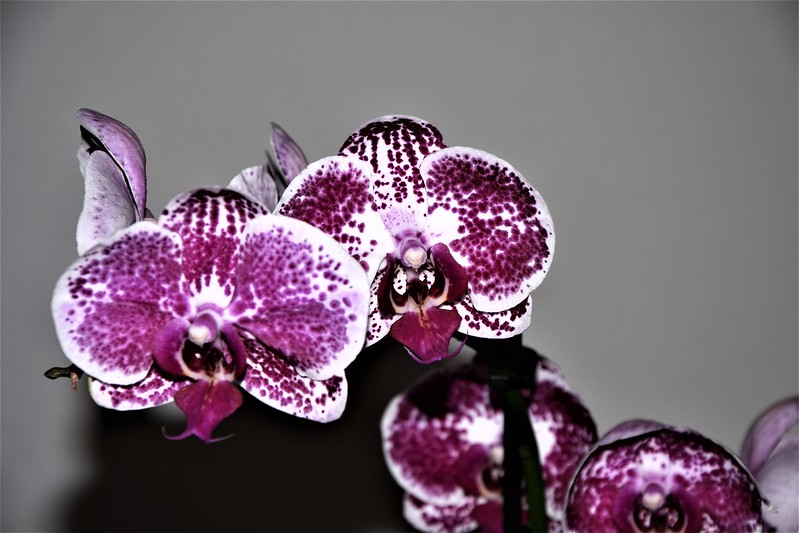 Everytime I visit the store they have something new in the orchid section. They are really versatile with their various colours and sizes. 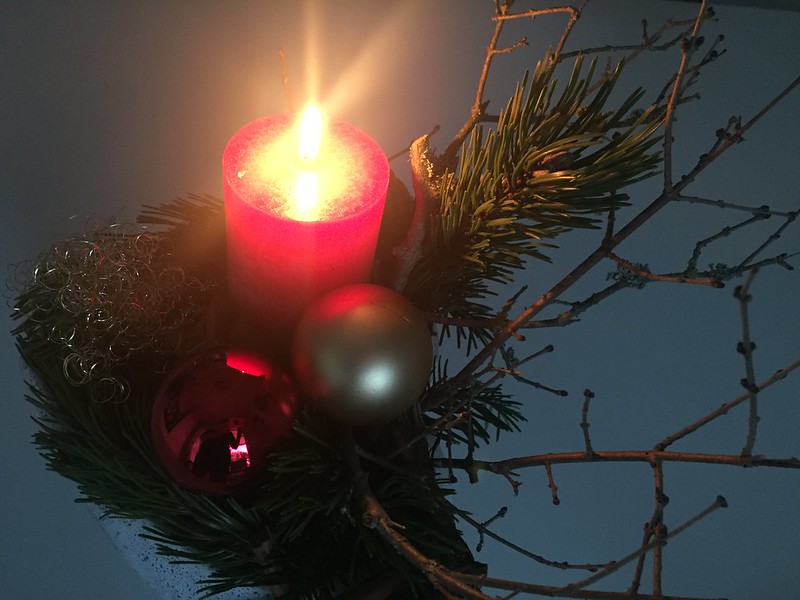 Not jolly perhaps, but when someone makes a special seasonal arrangement for you, you treasure it. My daughter-in-law spent time in organising a wonderful advents ornament and gathered the twigs and pine cones to arange with a candle in the middle.

Jolly is an adjective that I associate with Santa. He no longer visits me, because he is not here for me but for the kids. I remember the jolly santa in the big London stores. He always had a grotto and if they had the money, the store would also engage a Mr. Holly, as an assistant although that guy never really featured, he was just an invention of the store to make it all, well jolly.

In Switzerland you get the Sami Klaus that arrives with a list of your good and bad deeds. His assitant is the “Schmutzli”, dressed in a brown coat,  who carries a bundle of twigs tied together to punish the kids that have been bad. That is probably the Swiss version of the “me too” which seems to be the fashion at the moment.

We did not really get a “ho, ho, ho” type of santa in London.  As I got older and realised that it was all part of the Christmas show, I just saw a tired old man with a red face and an overweight stomach, dressed in red with a beard. He actually put kids on his lap (oh horror!) and whispered in their ear, like he did with me when I was younger. Unforgettable when I visited Santa, sitting comfortably and he asked me what I would like for Christmas. I was under the impression that you told Santa your heart’s desires,  so in my childhood innocence I did tell him that I wanted a baby brother.

He cast a look in my mother’s direction, who was standing very near to me waiting to pounce in case my contact got too close with Santa, and he told me “not this year”. Eveyone sort of laughed, mum least of all. I changed my wish to something more tangible like a railway train probably. I never did dolls, found them silly. Today the santa clause has to be careful. No more sitting on his friendly lap and having whispers in your ear, he could get arrested for a “me too” imitation. The Jolliness has now gone out of the Christmas.

Of course “me too” is not so jolly, but it really never happened to me. Did I miss something somewhere? 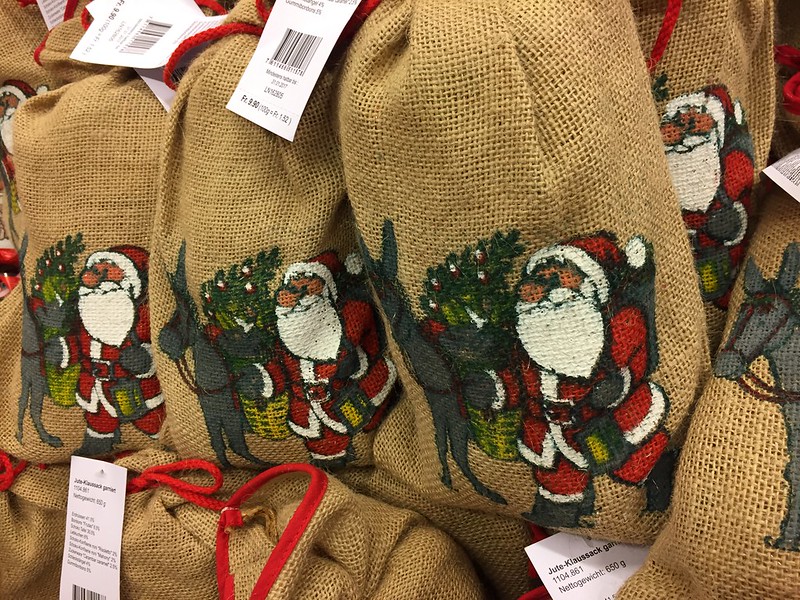 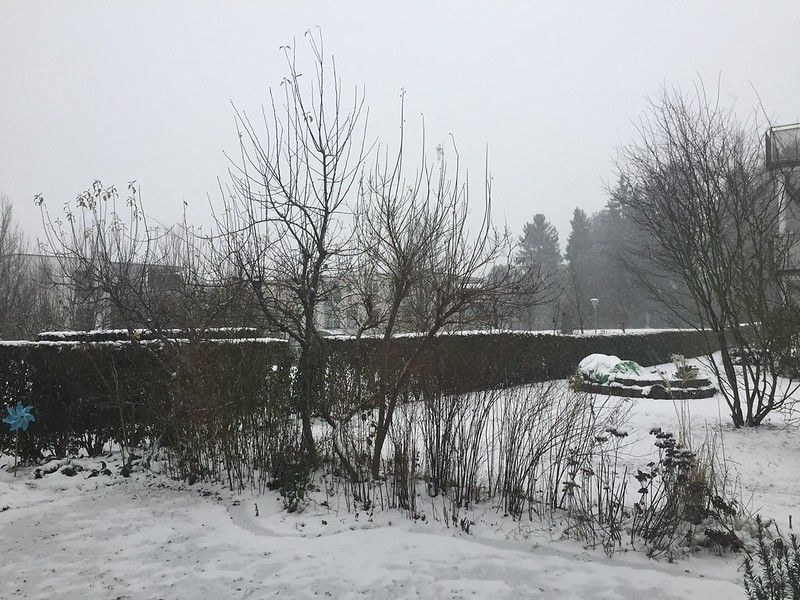 It was snowing again when I took the photo this morning, and we also had -4° C in the early morning. I decided it was one of those Sundays where I stay at home and hibernate for the day. Winter has arrived and it looks like it will be a white Christmas.

Yesterday my No. 2 son and his wife visited and naturally No. 1 grandson (at least my No. 1, Mr. Swiss already has two grandchildren and a great granddaughter in the bargain). Of course it was great holding a baby in my arms again. It is the most beautiful baby in the world, but they all  are I suppose if you are the grandmother. He has quite a voice and knows no limits with the decibels. Of course when he saw me he calmed down and even smiled.

The only excitement at the moment is watching the birds feeding outside in the birdhouse. Even the book I am reading is not so exciting. An icelandic police story, which is OK, but not exactly breathtaking. Life is more exciting in our village, although I have not see very much of our village lately. My excitement consists of car journeys to and fro to the supermarket and pushing the trolley.

Of course I have fun hoovering and cooking. I already have todays luch simmering on the stove. 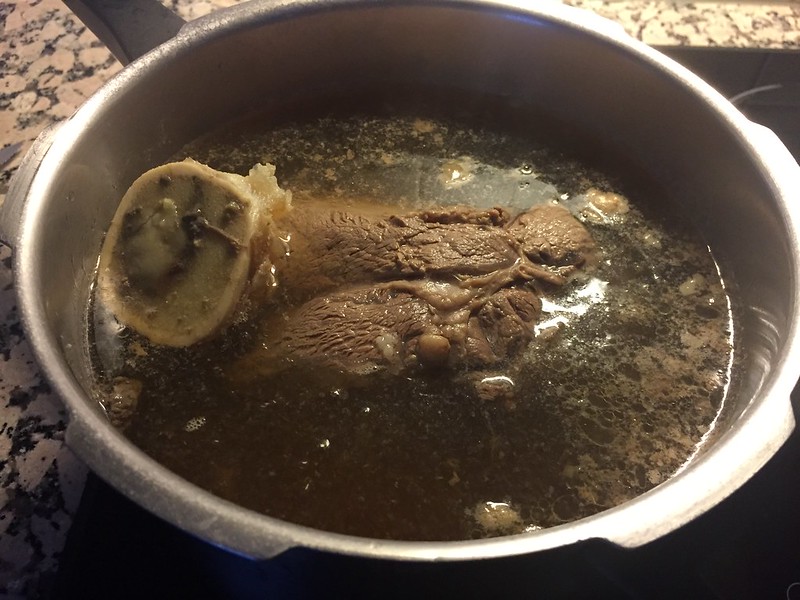 It is a piece of boiled beef with a few bones which will cook slowly for the next three hours. I will add some carrots, celery and leek to it and serve it with potato, and there you have my lunch. You see what an exciting day it will be.

Sundays are always scarce on information, so that’s that.  I will now count the snowflakes falling and listen to the meat simmering on the stove.

Hope you have a day packed with excitement and events, not like mine.  Yesterday afternoon we actually saw the sun. 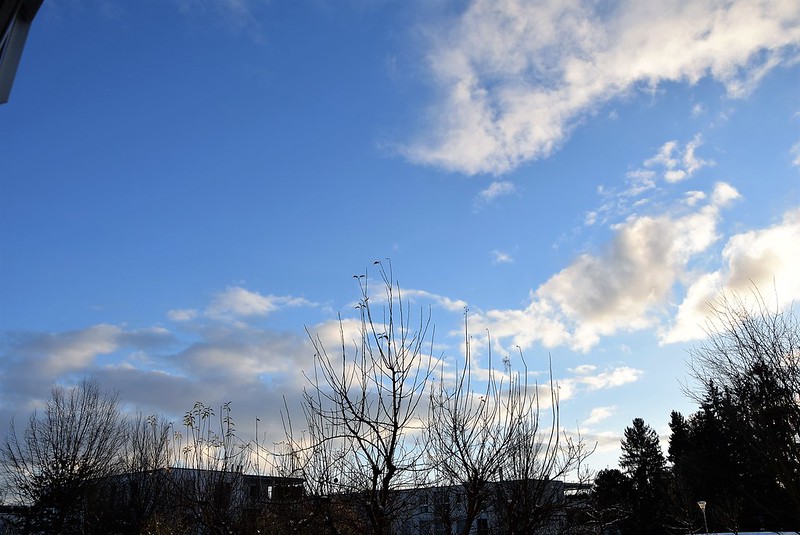