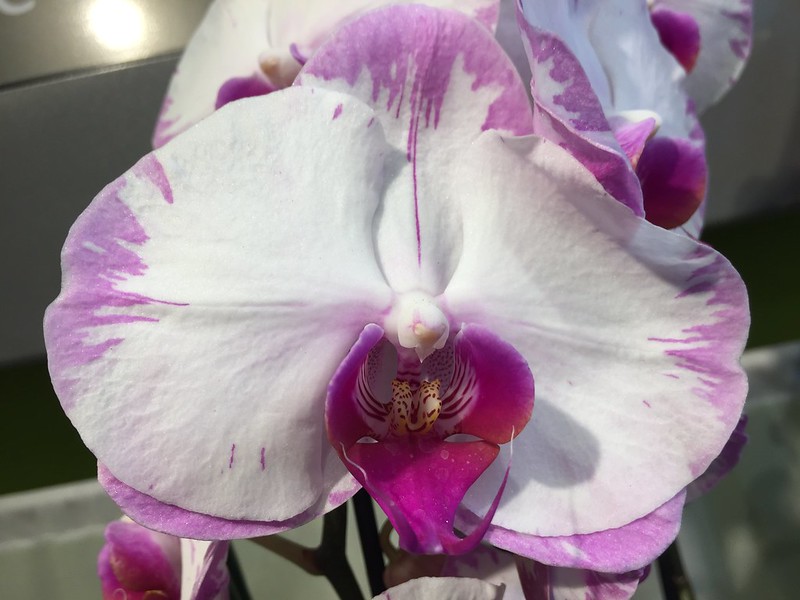 I just love the secret little details of an orchid – almost like a triffid. I have the feeling if I touch the middle of the flower it will absorb me. 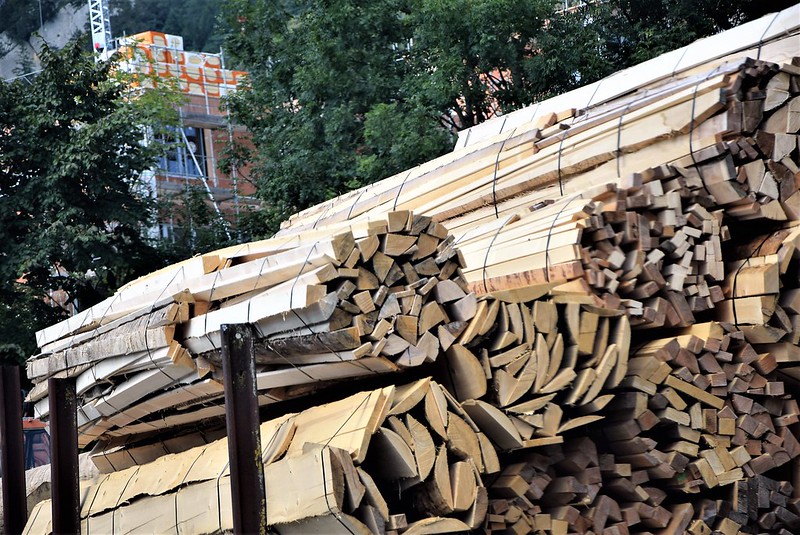 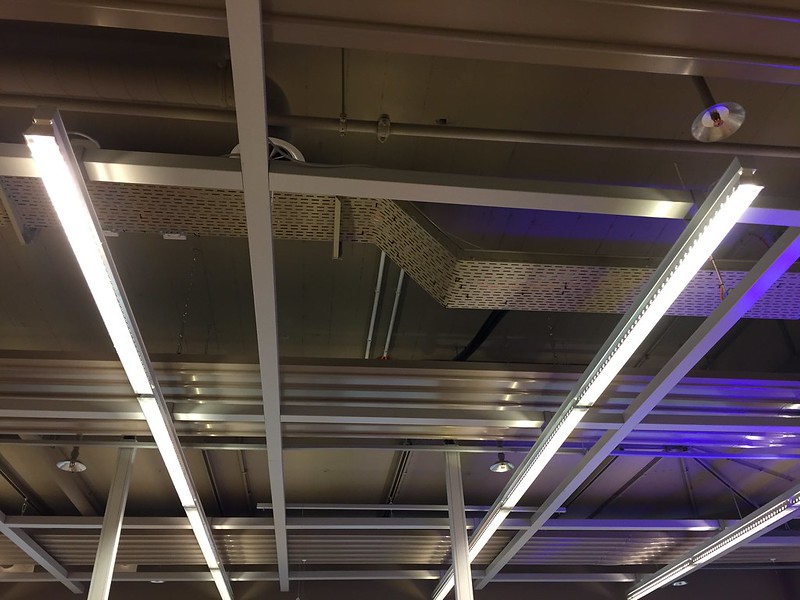 The roof in the supermarket 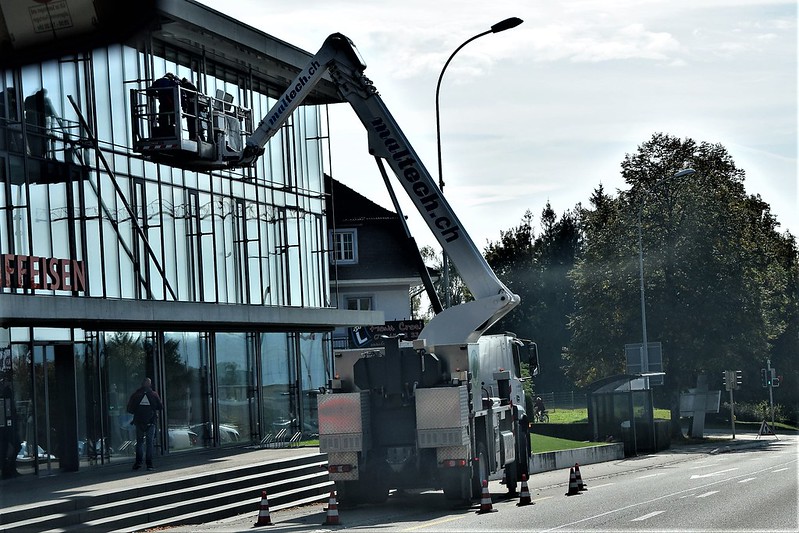 Cee’s Fun Foto Challenge: Letter O – Needs to have the letter O anywhere in the word 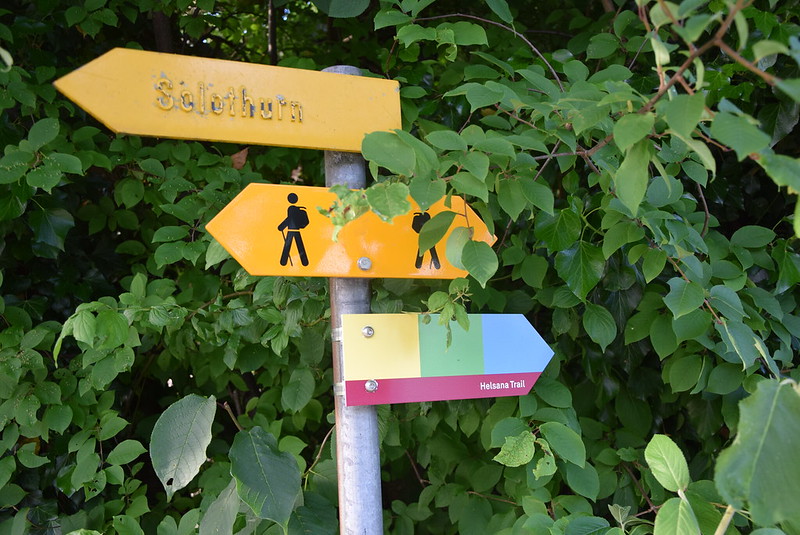 Everything that goes up must come down again, whether, animal, vegetable or mineral. Anyone can go up, just put one foot in front of the other and with each step you get higher. They you must come down again. That is not so easy. I hold the record of descending Swiss paths by sitting on them and sort of moving slowly downwards on a tender part of my anatomy. Of course this happens only on the hidden paths which are only frequented by the experts. My family are all experts. Even my 8-10 year old sons could do it. We reached the top,  exhausted and spent time relaxing and enjoying the view.

Eventually we had to go down again and they all ran off because it was easy and quick to go downwards. Only I was left trying to put one foot in front of the other but realising it was not as easy as it looked. I had wobbly legs, my feet were no longer attached to where they should be. And so I thought about it, sat down and was away, slowly but surely.

Directions confuse me now and again: not exactly in the wrong direction in a one-way street, but almost. I acually had my first driving lessons in London, but gave up. It was not my thing. 20 years later I tried again, but in Switzerland. It was more logical. They had the steering wheel on the lefthand side of the car instead of right. The gear levers were on the right and I am right-handed, everything was organised logically. Even the roads were positioned to match. I passed my test after about 90 lessons, but I only took the driving test once. My driving instructor did warn me now and again that we are not in England and driving on the lefthand side of the road is not advisable. That was when he got quite nervous.

And now I will go as it might be that another daily prompt attacks me from another direction. Yesterday I actually got two, perhaps that is why we are reminded today to only write one-way. 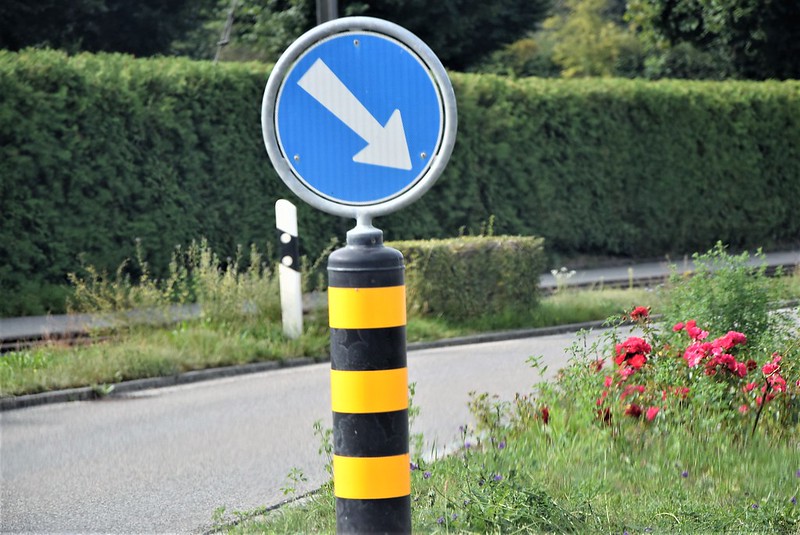 Daily Prompt: The Two Ways of a One-way 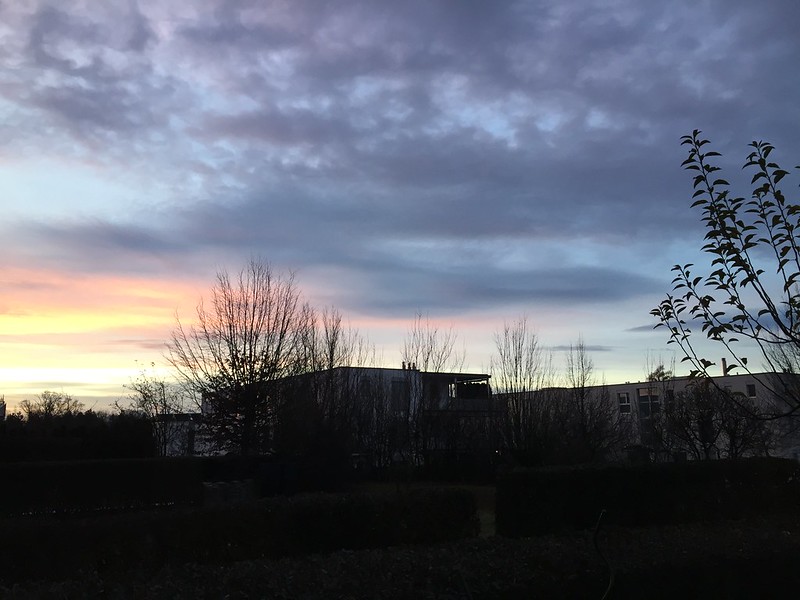 Now that is  good one to greet you when you arrive in the kitchen in the morning. Santa is supposed to be baking his Christmas biscuits when we have a red sky, although according to the german verse, it should happen in the evening, but perhaps he forgot yesterday evening. 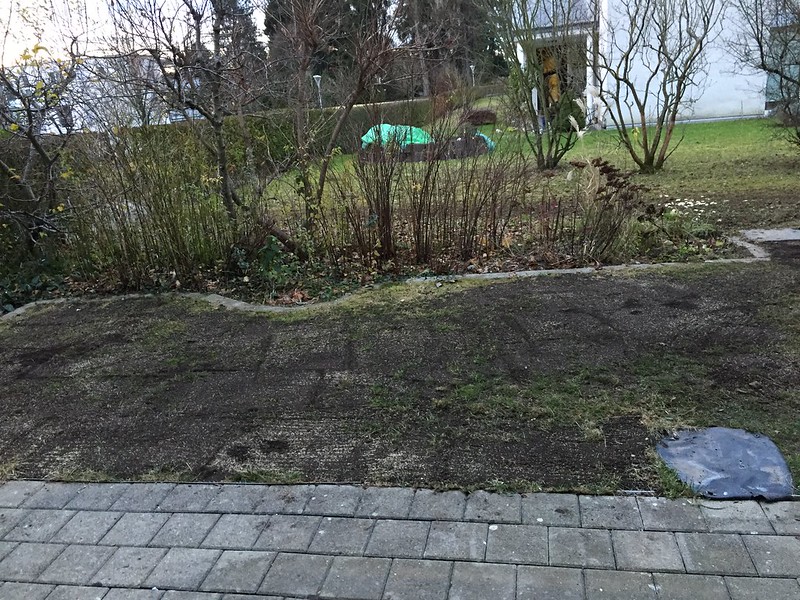 At last we can say goodbye to the gardiners and our building odyssey is completed. The gardiners are still hovering in the background, but who cares. They have other things to do. Yesterday our tiles were fixed on the back porch and our lawn was reworked. I was surprised as I thought they would wait until next year with the lawn. The gardiner loosened the earth, scraped out the rubbish and covered everything with fresh earth. Afterwards it got quite biblical with grass seeds being thrown everywhere. Now it just has to grow, although I am not sure if that happens in temperatures around 0° C and below. I was assured by the gardiner that it should happen. The seeds will be quite cosy in the earth and beneath the snow and they will go forth and grow eventually. In the meanwhile we are doing a rain making dance. Even this should happen today. I will believe it all when I see it. 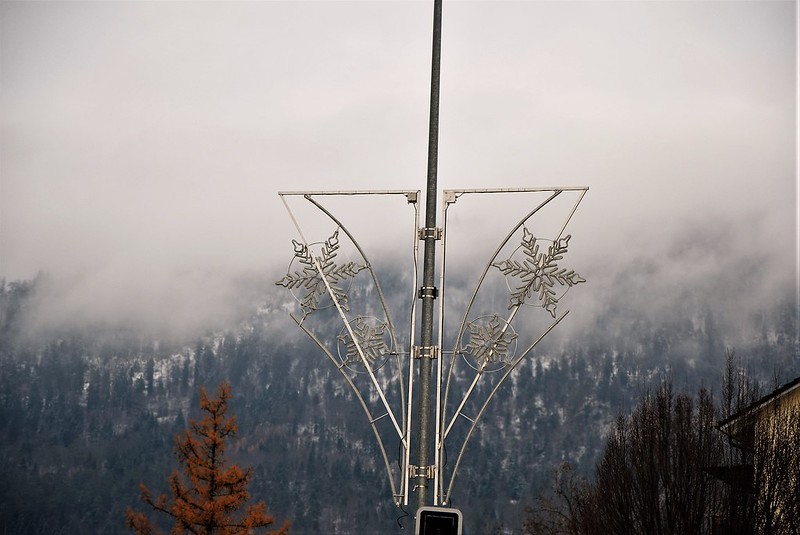 On my trip to the supermaket yesterday I noticed that the Christmas decorations were being mounted on the road. It is the village of Langendorf and they have the same every year. They look quite good when that are lit, but the big switch on will happen at the beginning of December.

In the meanwhile I saw that the Brit Prince Harry has now got engaged to an American film actress – so what, big deal. There are even discussions in Facebook giving their disapproval, and finding she does not fit into the family. I could not care less who he married, does it make a difference to me? It will just be a few more mouths to support and feed, especially if Harry decides to have a family. I don’t really do royal families, although they can be amusing. I must say the Queen did send my dad a birthday card for his 100th, but we had to remind her first. Dad was never a royalist really, he just put up with her but he was constantly looking at the card when it arrived being impressed that she remembered him. 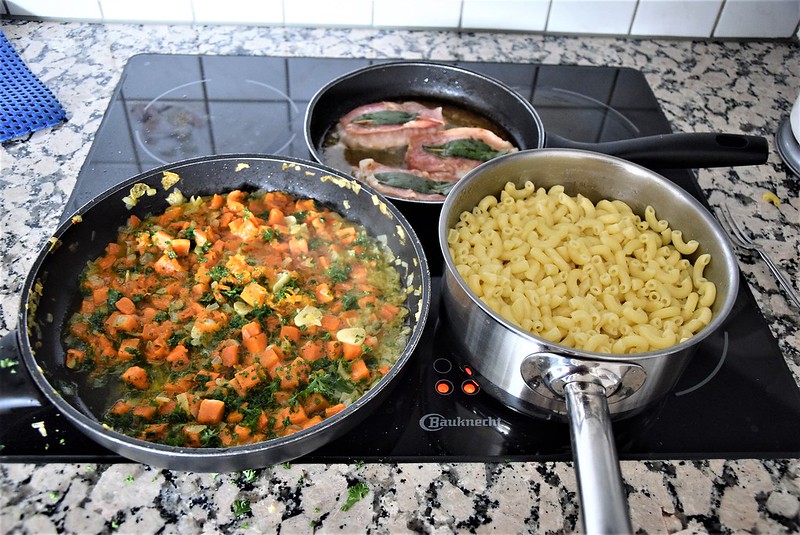 They had saltimbocca in the supermarket (meat slices with dried mountain ham and a sage leaf) at a good price. The original is with veal, but these were with pork slices which is just as good. It was a pasta day and for some time they had been offering various sorts of pumpkins ready for cooking, chopped into small cubes. Mr. Swiss does not really like cooked pumpkin, it is not on his list of edible vegetables, but I secretly hid them in the trolley at the bottom. He was curious to know why I bought fresh parsley, but I sort of ignored the question, It is logical to me to have chopped parsley  with pumpkin. Dinner was served, it was ok, but munching on pumpkin cubes was like topping up your meal with a spoon full of sugar. However, it was edible and it was eaten. I did notice that No. 1 son left the pumkin in a neat pile on his plate until the end. Either he was saving it for a treat or decided he did not like it. I will not cook pumpkin again. 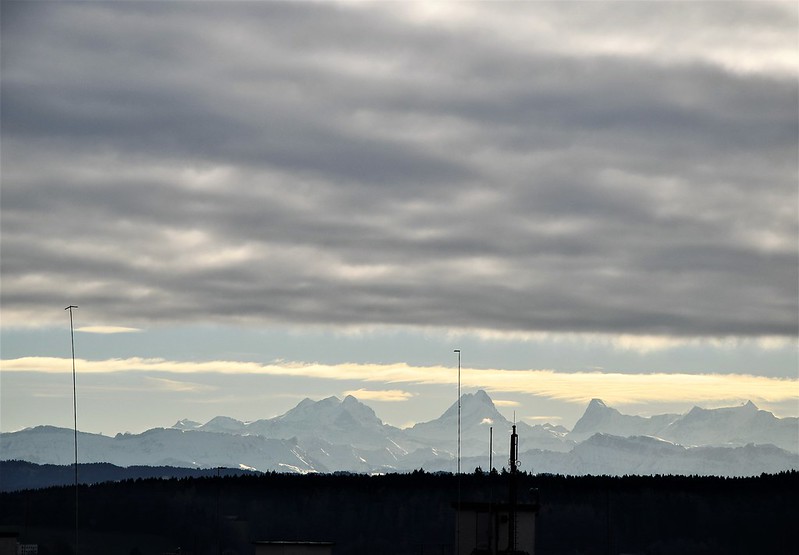 I was impressed by the view from the upper floor of the parking lot in the local supermarket yesterday. Mr. Swiss now parks at the edge to make it easier for a good photo when I leave the car. Whilst he is fetching the trolley I lean on the car and snap a few photos. It was a clear day for alp photos and you could see the Eiger, Mönch and Jungfrau all lined up in the middle of the photo.

And now I must clean a bathroom amongst other things. Tuesday is bathroom day. Today I have promised myself to visit the local phone store this afternoon and order my new iPhone X. Ok it is a luxury, but even we golden oldies need a perk now and again. The problem is no-one really calls me, but I can take photos, make notes and organise my online life. The delivery time is two weeks, so I have plenty of time to get things sorted.

Enjoy the day or sleep well according to where you are in the world. You might even be sitting down to dinner, so enjoy the meal.