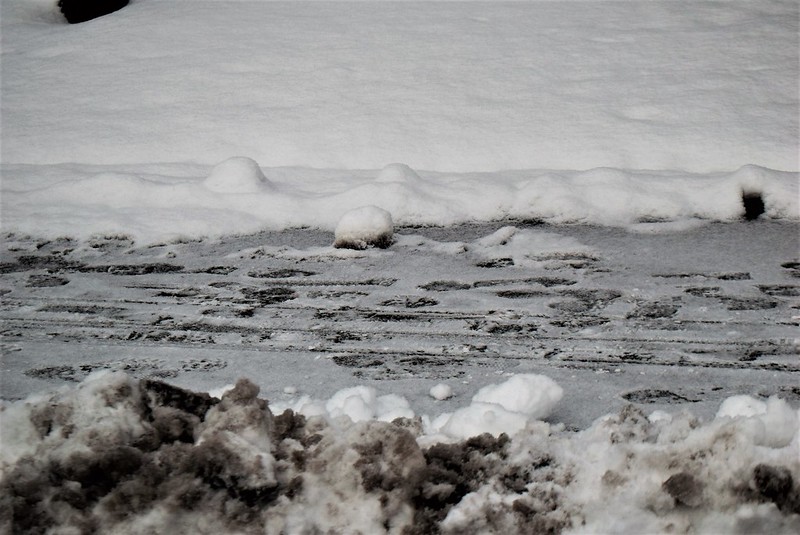 You know it is cold when the snow melts and leaves ice. 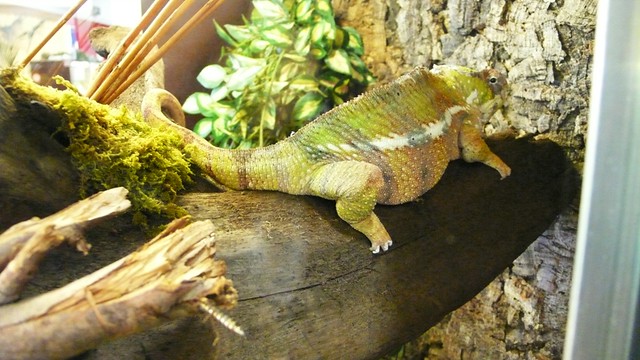 In February 2008 I dragged Mr. Swiss to a reptile exhibition in the town of Biel, Switzerland, a 20 minute drive from where we live because there was a reptile exhibition. My only purpose was to take photos.  They had everything from snakes to tortoise and of course lizards. In between there were also a few spiders, quite big ones.  Unfortunately they were all in cages, which meant there was glass between my camera lens and the actual animal. 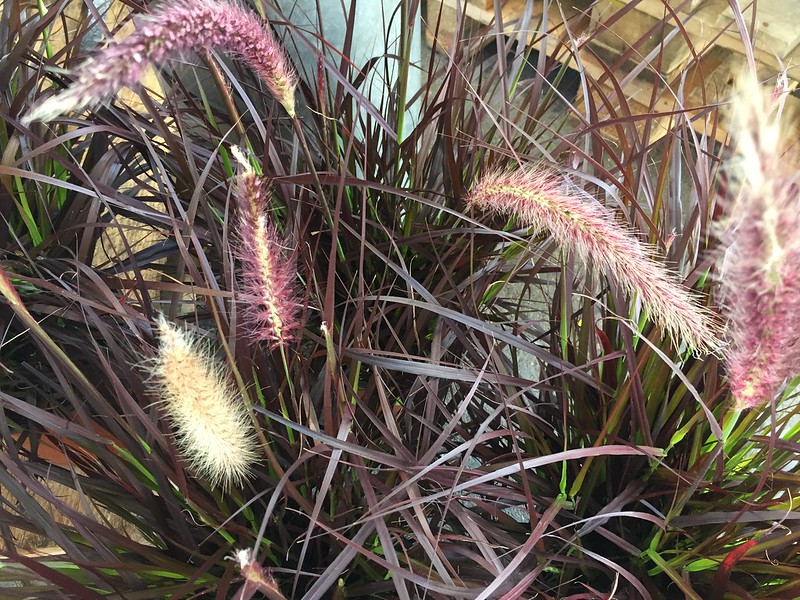 It must have been a flowerless day at the store when I took this photo. I just named it Reed for want of a more exact name, but they would certainly be pretty in someone’s garden. 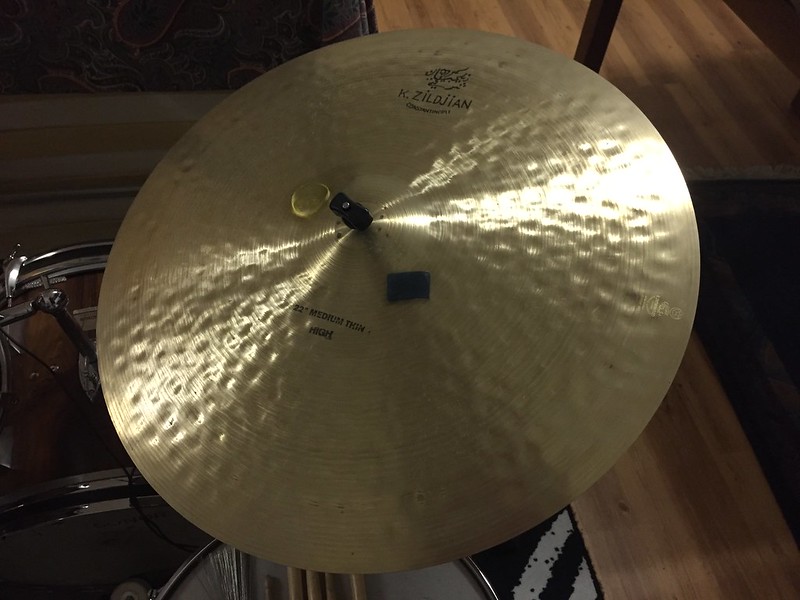 Apparently the Turks manufacture the good cymbals. There is even a very good company based in Switzerland, selling cymbals, originally Estonian. 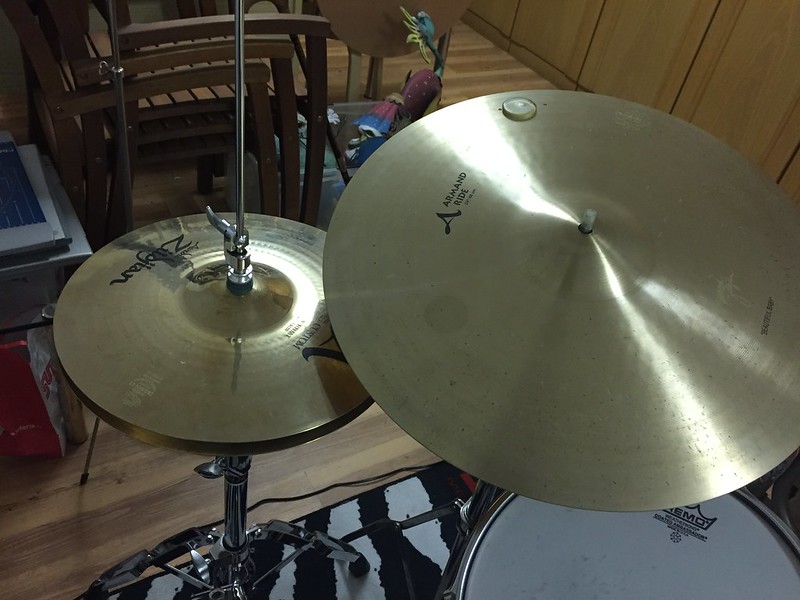 Am I an expert on cymbals? No, definitely not, but when you are married to an amateur percussionist you see them come and go. People bring all sorts of things into the marriage. Mr. Swiss brought a set of drums with him, and cymbals to go with it. I always thought a high hat was a something you wear on your head. Forget it. It is that composition of two cymbals, one at the top and one at the bottom (on the left of the photo). There is a pedal attached as by putting pressure on the pedal the two cymbals clash together and make a suitable sound. That can be very percussive.

We once had quite a collection of cymbals, some very big, enormous, others smaller. Fellow percussionists came and went carrying away a cymbal that was no longer needed, because a new one had taken its place. For me they all sounded the same, but I am not a percussionist, just the wife. The nice thing about being married to a drummer is that the drum set lives in another room, we have a so-called hobby room in the cellar. Yes, they do make a lot of noise. We live on the ground floor and when my percussionist disappears into the cellar I do not hear anything. Apparently my neighbour opposite does, but she lives directly above our percussion room and it does not bother her so much.

That was the neighbour from 5 years ago. They come and go, I hope not because of the drummer in the house. 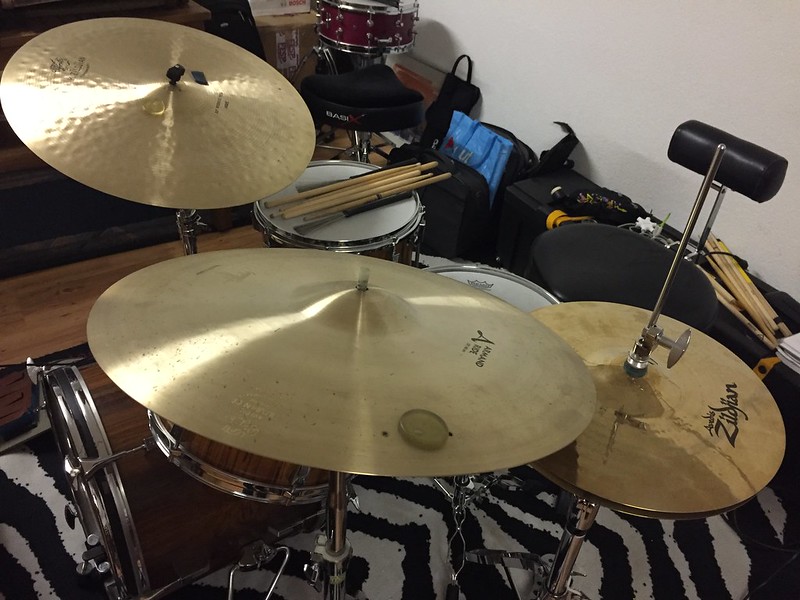 Now and again there might be a jam sessions when the boys (which are now golden oldies) decide to play together. They take their trumpet and bass with them as well as a keyboard. They are movable instruments. Mr. Swiss had parked his drum set in an extra room that he had for the purpose of jam sessions for a few years. It is a feat of the impossible to move a complete drum set every time a session is called for.

There was a time when there were engagements, playing at a the local jazz club now and again. That was combined with taking the drum set apart, putting it in the car and transporting it to wherever they were going to play. It had to be removed from the car and assembled once again. Thie was ok when it was local, but there were also places far away. The drummer was always the one who needed most time. When the gig (engagement) was completed, usually around midnight, the drum set was again dismantled and re-constructed for the home journey: the story of a drummer’s life.

But there were good times apart from all the moving of the percussion. Some might call it noise, but for me it was part of my life. Even drummers become golden oldies, although they still have the strength and energy to play.

Daily Prompt: Percussive with the percussion 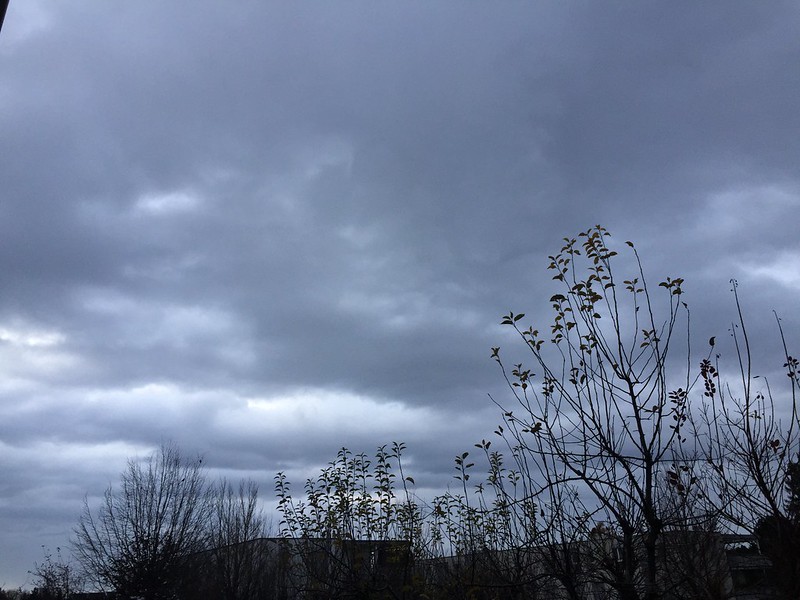 Nothing exceptional this morning. After a day of rain the sky has decided to build a few grey clouds and there might be some more rain on its way. On the other hand it could be that this is just a goodbye and the sun will arrive. Makes no difference really, I am not going places or seeing things. 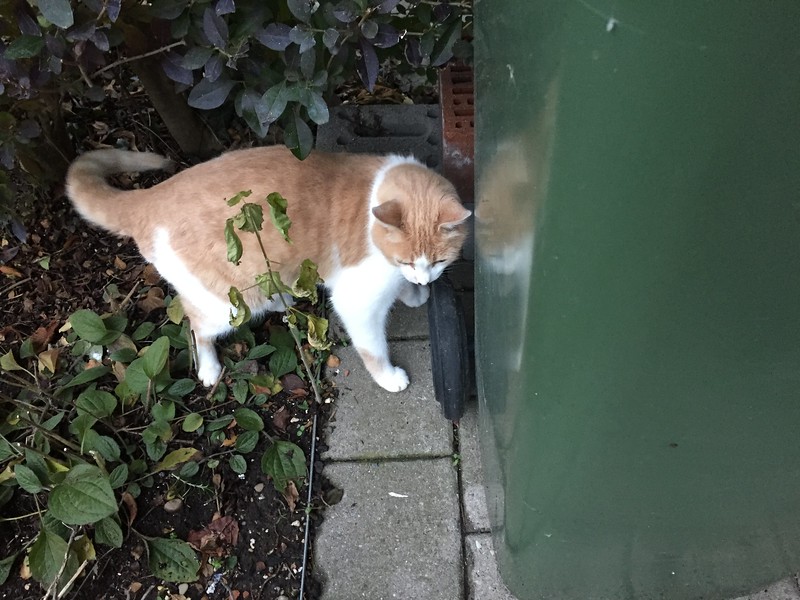 We had a visitor this morning, whilst I was busy preparing my frugal breakfast. Roschti arrived, the neighbour’s feline. I now have my compost container in a different place in the garden as it it more on one side. This seemed to be of interest to Roschti who was walking around it and sniffing everywhere. He was  always at the base, on the right side and afterwards the left, trying to push it with his nose.

Mr. Swiss decided to investigate and discovered a mouse which was hiding underneath the container and now and again put in an appearance. This was playtime for Roschti, who saw an opportunity for a diet extension and he was constantly hovering around our container. In the meanwhile our feline, Tabby, arrived. She was somewhere sleeping in a back room, but if your are a cat you can smell mice even if they live in the next village.  When Tabby saw that Roschti had already claimed the trophy, Tabby disappeared. In the meanwhile the mouse saw its chance for the great escape and the last we saw was a mouse breaking all running records with a disappointed Roschti deciding that it was too exhausting to run after a mouse in the early morning. 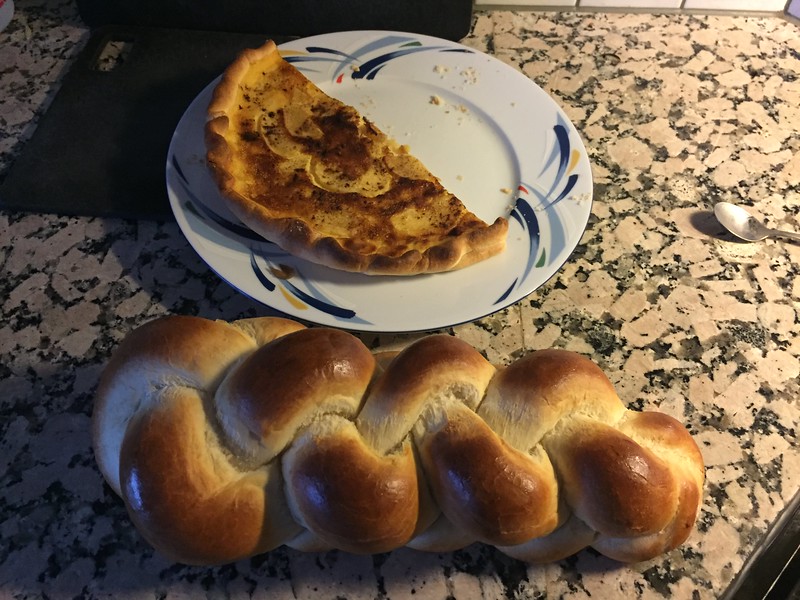 In the meanwhile, Mr. Swiss has been busy baking the Sunday bread. He does not make the pastry himself, but we buy the half baked loaf in the supermarket. All it needs is a short time in the oven to bring it to perfection. It is a sort of Sunday traditional bread here. Many housewives make their own from the beginning, and I have also been known to do this in the days when I was full of energy. Today it is not my ambition to wade in flour and yeast in the early hours of a Sunday morning and so we buy the half finished product. In the background on the photo you can see another one of the Mr. Swiss specialities. He backed yet another fantastic mouth-watering apple flan yesterday afternoon. In the meanwhile half is still left for this afternoon.

I have now finished my last book, The Limpet Syndrome by Tony Moyle. I can really recommend it. It is a first novel from this author, and the second in the series was released last week. As far as I can see a third novel is also planned. A bit of the supernatural, but something completely different.

I am not bookless at the moment, but have intended to read “The Shining” by Stephen King for some time. We all know the film, but after reading “Doctor Sleep” which is a sequel, I realised how much the original book had been adapted for the film. Films change so much from the original stories. They invent new characters. amalgamate characters and even eliminate many. The storyline changes to suit the film. I remember reading “Girl on a Train” by the british author Paula Hawkins. I found it a very good storyline and had many memories or travelling by local trains in London. The film became an American Mystery Thriller and even the book had been re-written to suit the American background. I saw only the beginning of the film, it was nowhere as interesting as the book. I know why watching films on the TV bore me, they have no way so much interest as the original book for me.

And now to move on, housework is not completed on a computer unfortunately. I now have to get down to the manual work, where I suck away the remains of yesterday with the vacuum cleaner.

Have a nice Sunday everyone. 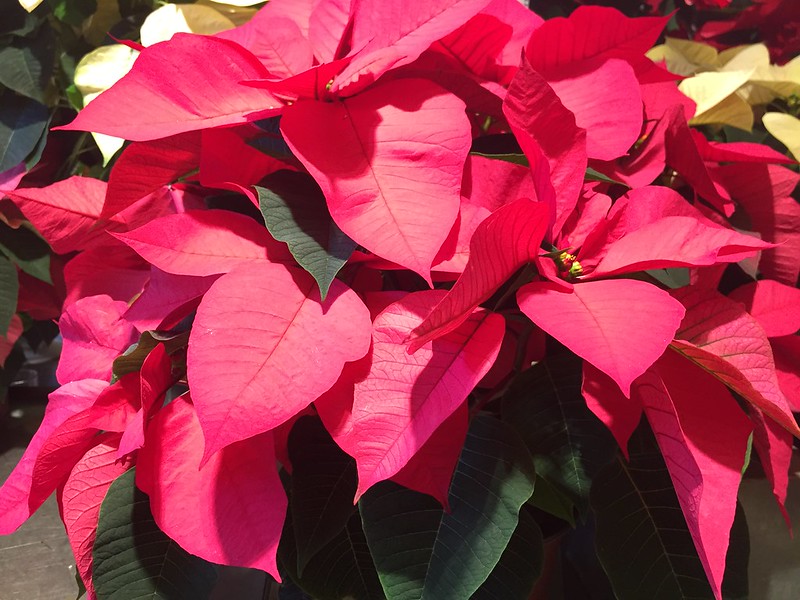