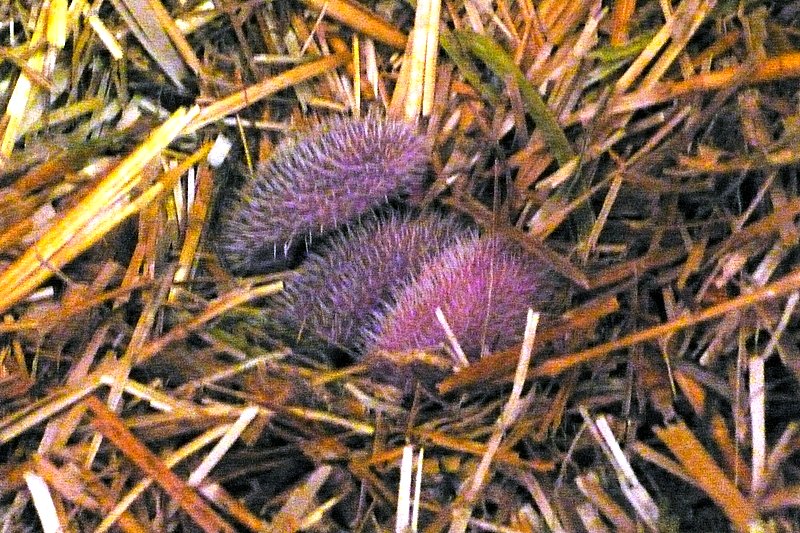 “You mean there will be more.”

“It’s all top secret at the moment. We don’t want everyone to know, otherwise a panic might break out.”

“Of course you know, you work in the department. It happened after the creation of our new weapon. We just tried it out and then they arrived. The chief said to keep them nice and warm, to make sure they survive.”

“They move, I think they are breathing. Perhaps there are more of them.”

“They are everywhere. People are calling all the time asking us to collect them.”

“But they look quite harmless.”

“That’s what they said about the Jabberwocks, not to mention the Triffids. Remember the gremlins?”

“Now that was a really a problem. They were so sweet at the beginning and then they began to eat the triffids.”

“Which was what we wanted. The problems began when the Jabberwocks discovered the triffids were tasty and began to eat them. The triffids and the gremlins eventually disappeared.”

“That was a good thing, no-one really wanted a triffid or a gremlin.”

“Of course not, but what are we going to do with the Jabberwocks. They are bigger than us, and are quite slimy.”

“We were hoping that they might develop a taste for Jabberwocks..”

“Not really. They mated and now we have large pink spiky jabberwocks.”

“So it would perhaps be better to kill them.”

“That is a bit difficult, we might kill the wrong one. One of them absorbed the prime minister last week, and they told us that they cannot find the president of the States. They seem to have developed a taste for power.”

“And they look so small and innocent as babies.”

“It is now feeding time.”

“They don’t really eat, they absorb. Just don’t get to near to them when they are hungry.”

“Whose that strange guy over there with the pink spikes instead of hair.?”

“That’s the new boss, the last one had an accident. He fell into the nest.”

They are amongst us 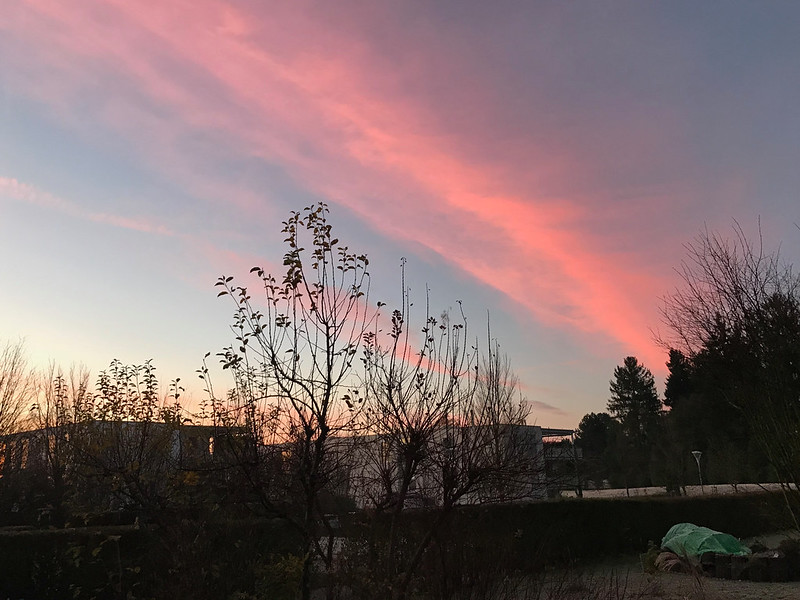 Mr. Swiss was up earlier than me this morning. This is nothing exceptional, he always stops hugging the bed earlier than me. He does his own thing on his computer and otherwise in the apartment, and I do it all from between the duvet and the sheet with my iPad. When I eventually reached daylight I saw that there was a sunset with a difference, nothing special, but more of a light show. I proudly showed my photos to Mr. Swiss and he said he has the better photos. Yes we are now competing with the photo of the day. OK, he was up earlier and got the early bird catching the worm thingy, I just got the washed out clouds. The photo above is not mine, but one of the many that Mr. Swiss took. As we are joined in my Flickr online site he transferred them over, all 10 of them. I had to tell him that 10 photos of a wonderful sunrise was 9 too many, so I selected the best. He has the better mobile phone camera with his iPhone 7, I am still stuck with the iPhone 6 until I eventually get my iPhone X, but I will have to get up earlier and that does not appeal to me. 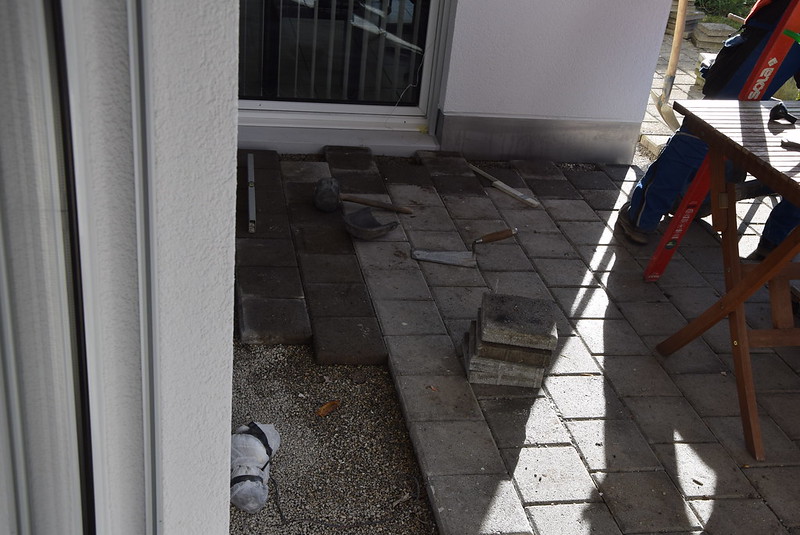 Our gardiner is progressing with the tile laying effect and all being well he will finish the work today. This means that we at last have a usable front porch.

I am reading a very funny book at the moment, “The Limpet Syndrome” by Tony Moyle.  I find it funny to the extent that Mr. Swiss had to ask me what I was laughing about as I was disurbing his TV evening. It is about the afterlife and what happens when two souls do not arrive where they should. The main character in the book gets the job of finding where the souls have gone. The Prime Minister of Great Britain is involved and of course hell plays a large part. I do not want to spoil the story if you are interested. I have a weird taste in any case. I found the book because Amazon told me that the second book in the series was now available, “Soul Catchers”, and I was wondering what to read next, so I searched for the first book of the series. I find it hilarious. 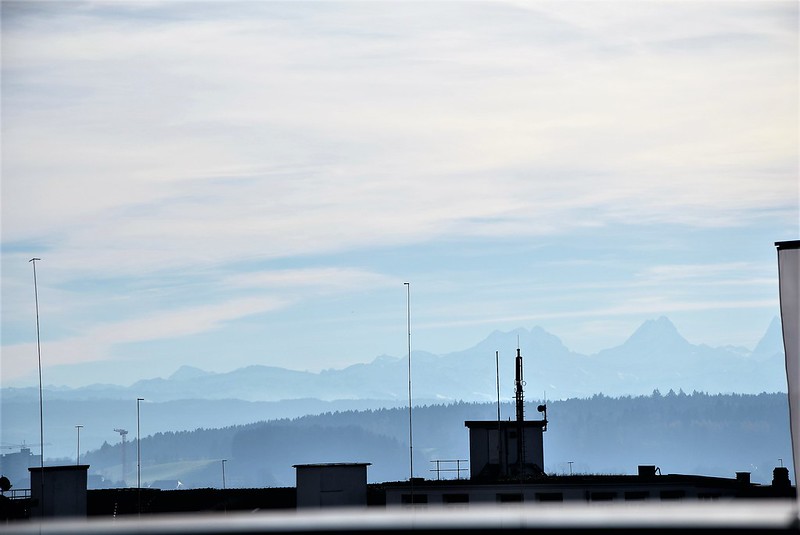 We were in the supermarket yesterday and Mr. Swiss parked on the top floor (there are only two, ground and above). This means that I get a good view of the surroundings. It was a good day yesterday for a better sighting of the Bernese Alps. Mr. Swiss is not always so happy when I leave the car, because he wants to get the shopping done. Whilst he is on his way I am leaning on the car with my camera in my hand taking photos. Eventually we meet in the store, whereI switch to my mobile phone camera. I will be glad when I eventually get my wheelchair, then I can get out again and go on a real photo safari. At the moment I am really limited with car journeys and supermarkets. 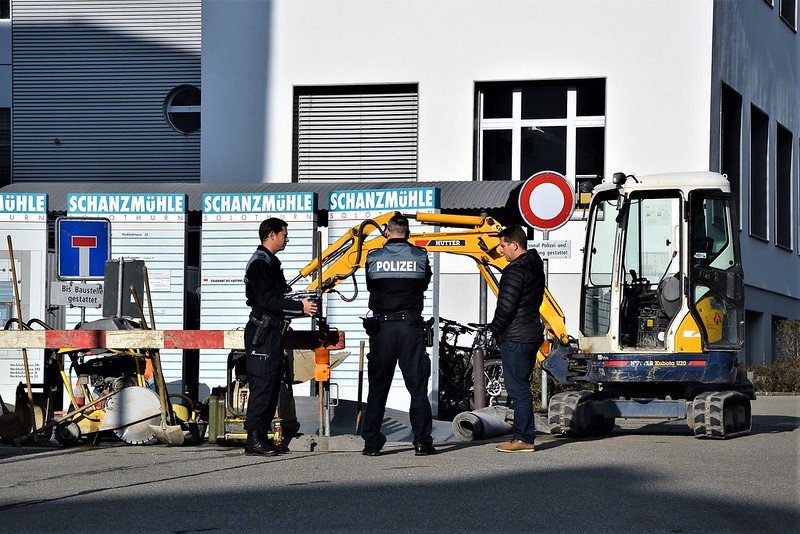 Now and again I get a little excitement whenI see the local sherrifs gathered around a suspicious object. Perhaps a victim had been discovered and they were discussing how to use the excavator to dig it out, or should they just cover it up and forget the whole thing. The things you see from a car window.

And now to move on, it is time to think about taking a walk with the vacuum cleaner and mop and even cleaning windows. A woman’s work is never done and Mr. Swiss has an appointment with his doc this morning. They are the only people we actually see except for neighbours and birds visiting my birdhouse in the garden.

I will leave you with yet another photo of our local mountain, Weissenstein, but it is fresh from the camera, uploaded yesterday evening.  Enjoy the day, do not forget your computer, otherwise it will feel neglected. 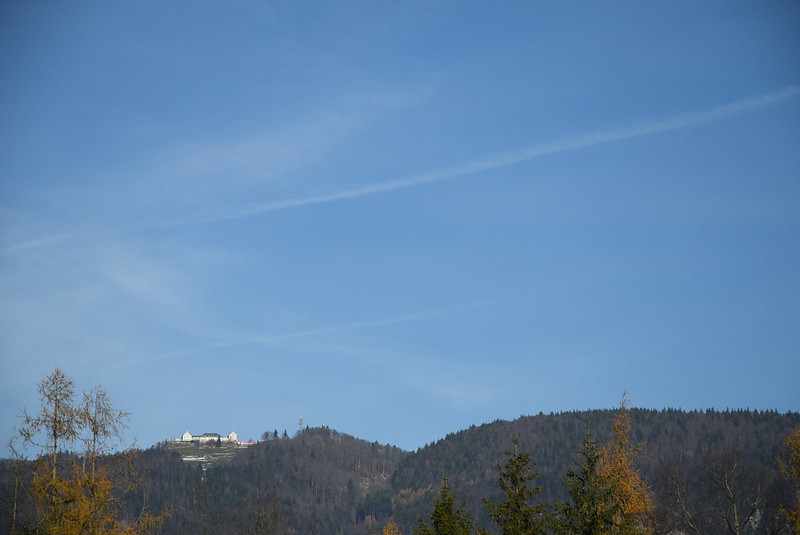