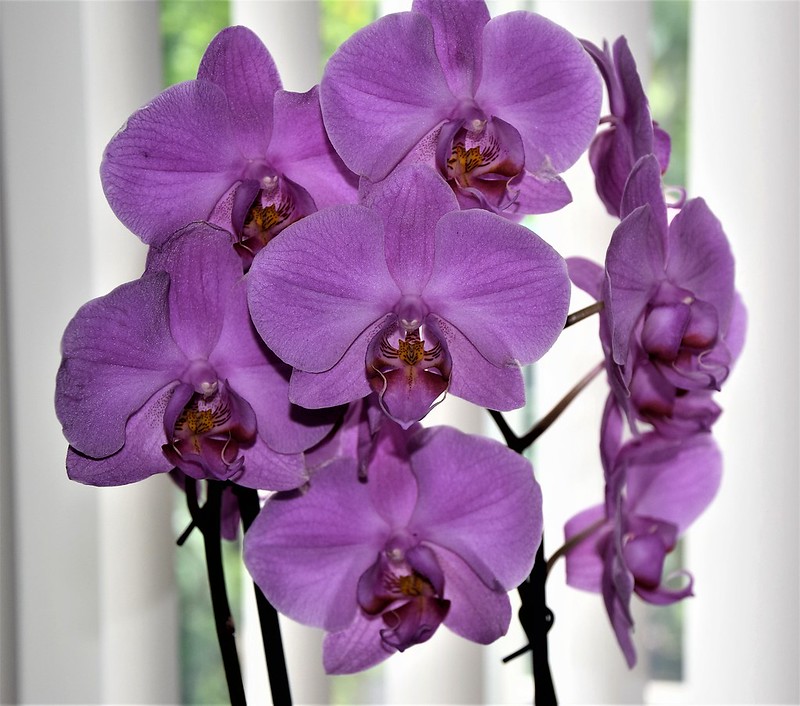 I like to have an orchid at home now and again. They are thankful flowers and generally last for a couple of months. Eventually they lose their flowers, but you can always hope that they will grow again. Unfortunately that does not always happen with my orchids, but I never give up. 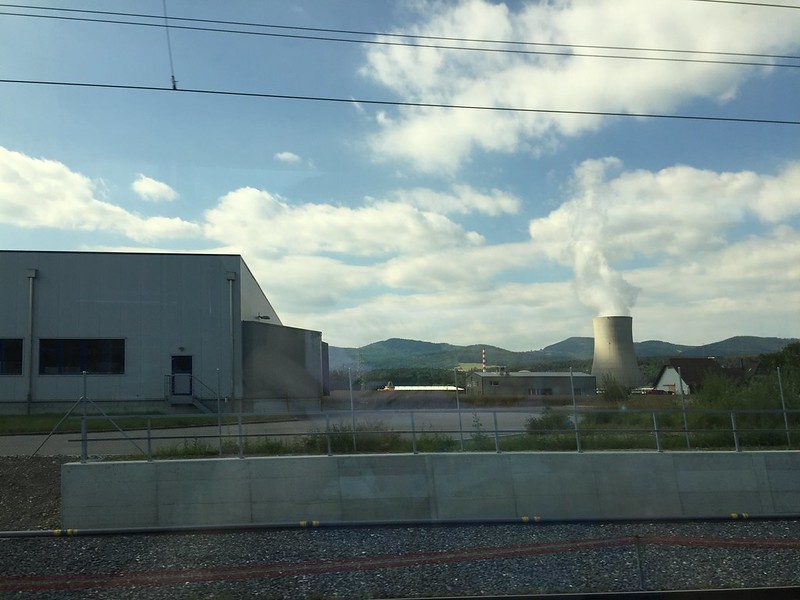 “Why are you closing all the windows? We have no fresh air.”

“Look out of the window, they are burning again.”

“But it is only white smoke, nothing dangerous. You even see white smoke in the Vatican City when they elect a new pope.”

“But we are far from the Vatican and live in a country village with clean air. We do not need that pollution and we are not catholic.”

“It is not pollution, I cannot smell anything.”

“Of course you can’t, I have shut all the windows.”

“An I am sure if they were open we would have no bad smells.”

“I don’t like it. Since they built that place there is continuously smoke belching out of that funny shaped chimney and the pope doesn’t live here either.”

“I don’t know what they are burning, but I am sure it isn’t dangerous.”

“How do you know? I don’t trust that government lot, they are always up to no good.  One morning we will be laying dead in our beds, because of their games with the air. It might even be something to do with a foreign power to show them that they can drop their bombs where they see the smoke signals.”

“Don’t be ridiculous, now open the windows. Look you cannot smell anything, it is perfectly safe.”

“Are you sure, it looks strange to me smoke belching out like that.”

“They are probably just burning local household refuse. It is all done differently today: much cleaner with no smell.”

“I am not so sure, I can even hear a siren sounding”

“That is probably a local exercise, they try them out now and again to make sure they are still working.”

“But look at all those dead cows in that field.”

“They are not dead, just having their midday sleep.”

And so life continued in a small village somewhere next to a nuclear power plant. You get used to the continuous smoke eventually and do not really think about it.

The next morning they were found dead in their beds, together with the other inhabitants of the village. If only they had kept the windows closed, but perhaps that would not have helped.  It was the first nuclear power plant in the area, but even they have their problems. 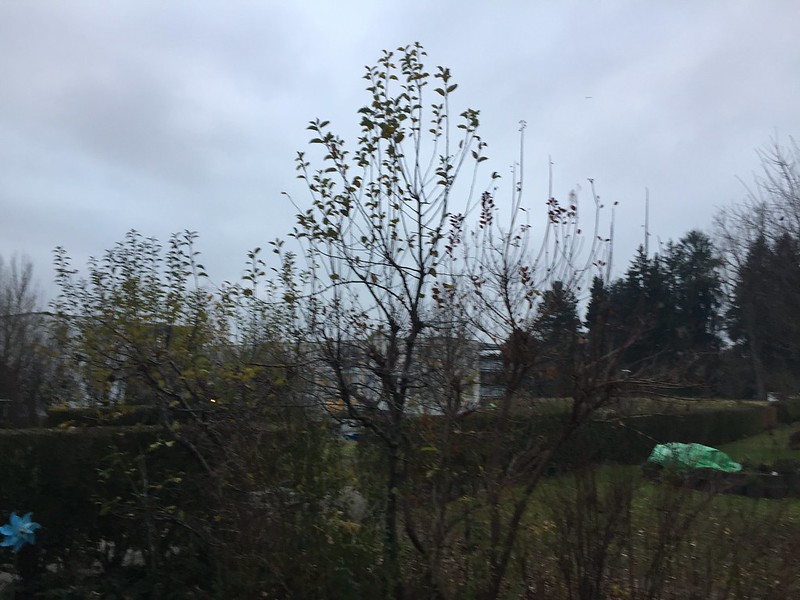 Not much exciting in this part of the world today, but Saturdays are never exciting. I will be a stay-at-home domestic servant today. There are even grey skies to match the mood. Mr. Swiss will be on a short expedition to the supermarket for some food remainders. It’s chilli con carne this evening and we like to eat it with fresh special bread, so I hope he finds some in the store. I also have my diabetic tablets waiting at the chemists which he will pick up. Otherwise it is just me and the birds. 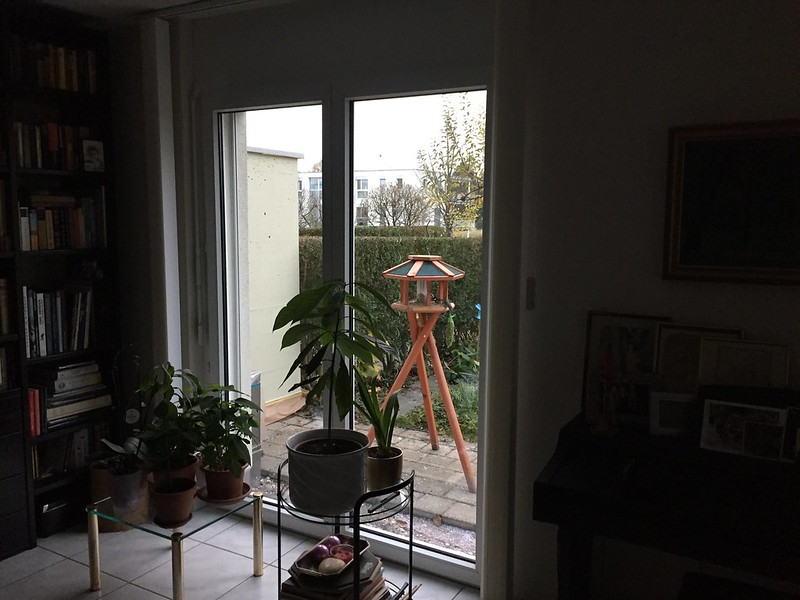 As you can see my bird villa is waiting for the visitors outside the window. I draw the curtains in the morning to get a better view with the camera, but I have to be very careful and patient. They are very nervous and notice if there is the slightest movement behind the window, so I have to be patient. The wall behind the birhouse was painted yesterday, the last wall. The painter was moving my birdhouse  to get to the wall, and as soon as he was gone, I moved it back. The paint is now drying, so I will leave it until Monday. The tiles still have to be replaced on the ground on this side of the appartment. 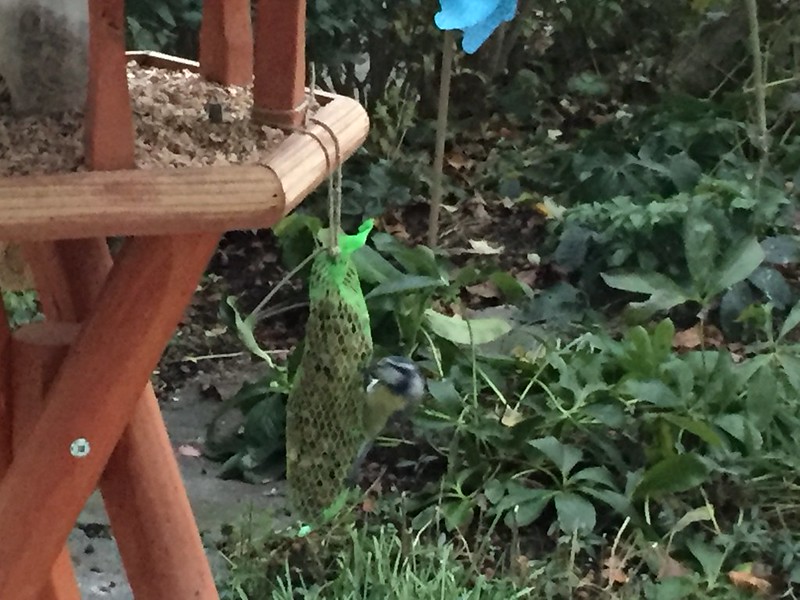 I managed to catch this Great Tit hanging on the seed pouch beneath the birdhouse. He was so engrossed in his food he didn’t notice me doing the honours. The photo is not so sharp as my iPhone 6 only has the basic camera. I am really looking forward to my new iPhone X with the super camera. Mr. Swiss has an iPhone 7 and that even takes the better photos than mine.

Son No. 1 has just waved goodbye as is on the way to the station for the train to Geneva. I told him to take a few photos when he is there. Even he has an iPhone 7, but I am not sure about the photos. He is an autist and has his own way of doing things. I am sure he will be visiting the various record shops in Geneva: music is his hobby. 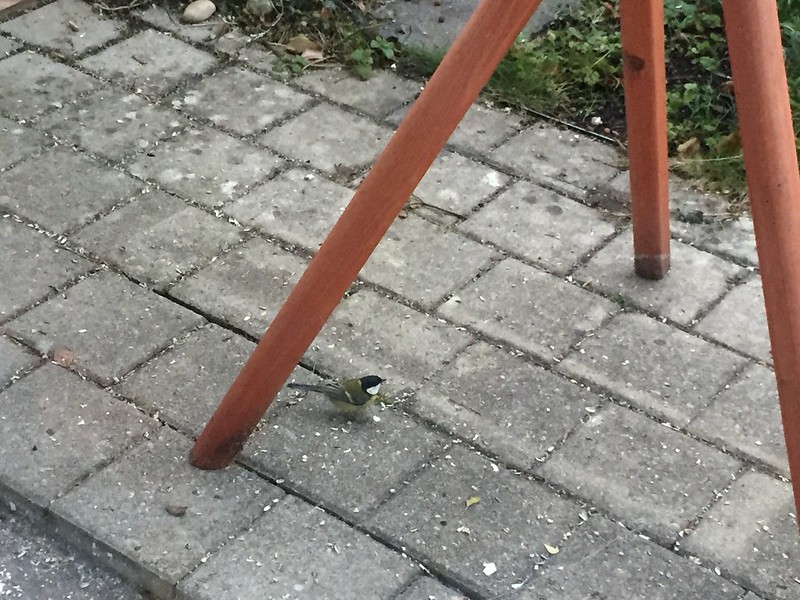 This little fella decided to see if there was anything worth pecking on the ground beneath the bird house. At the moment my new photos are only birds as I no longer get out on my own so much. My days of walks are no longer possible. Of course I can walk, although no longer smooth running. At home I have no great problem, can use my stick for support if necessary, but outside it is a different kettle of fish. I am worried that I might fall as my left foot is not longer attached to the leg so well. I used to take walks around our village, down to the river, or the local castle, but it is getting strenuous. I hope to get my wheelchair in a week or so and then I will be on my way again taking photos, I hope. I try to make life as comfortable as possible.

And now to organise my Saturday morning. I hope you all have a good week-end. Here is another photo of the birch tree from yesterday on a slightly different angle showing how really big it is. It only does the brown leaf act once a year, so for those interested, here it is again. 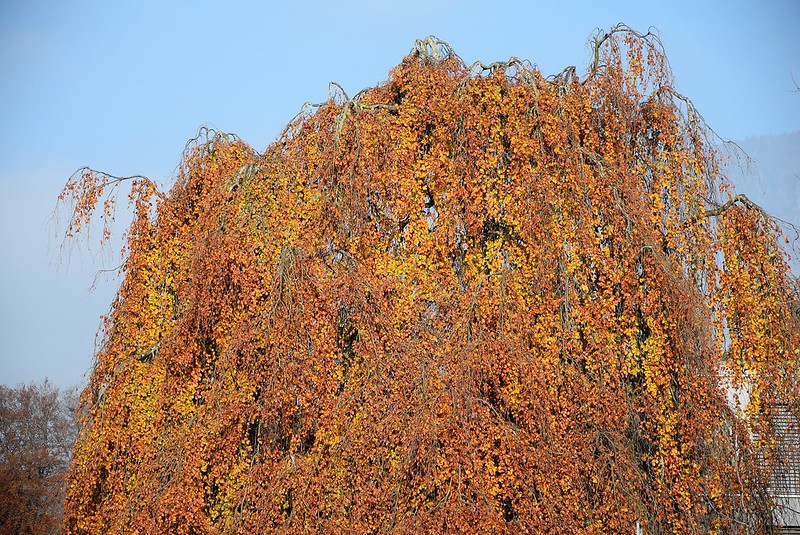