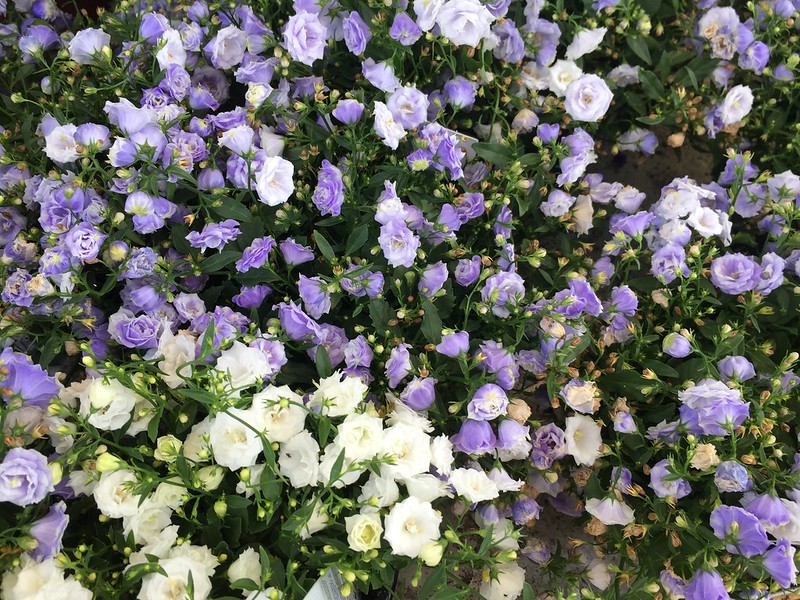 I think they are also known as bell flowers. 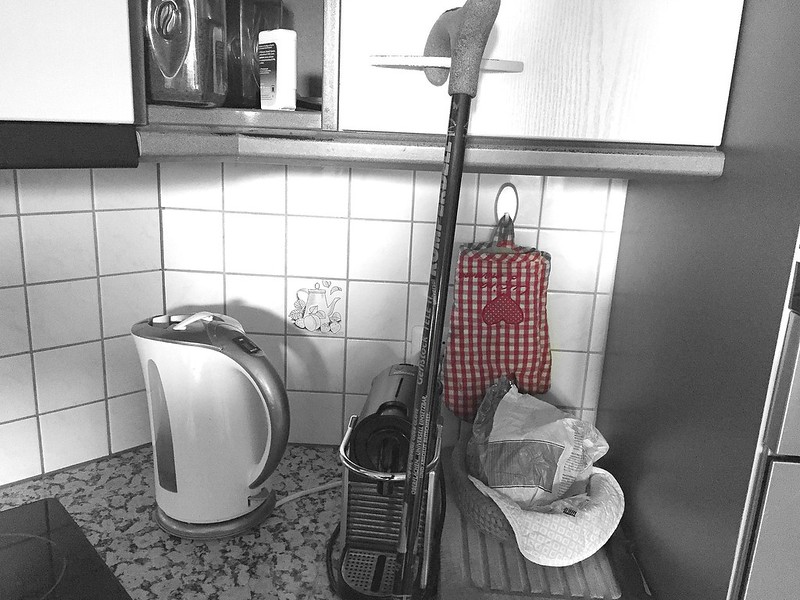 From left to right: the water boiler, my Nespresso coffee maschine and the bread basket. Hanging on the wall an oven glove and my walking stick hanging over everything in case I need it. 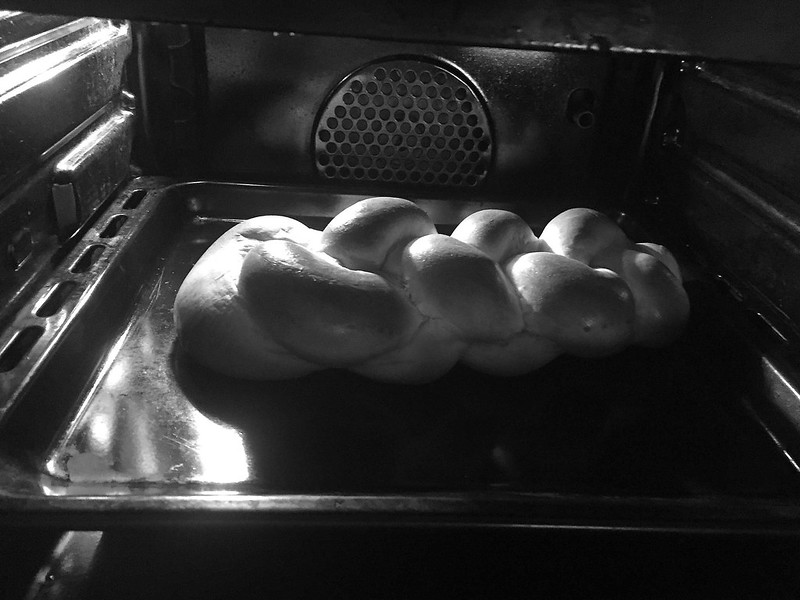 Sunday bread baking in the oven. 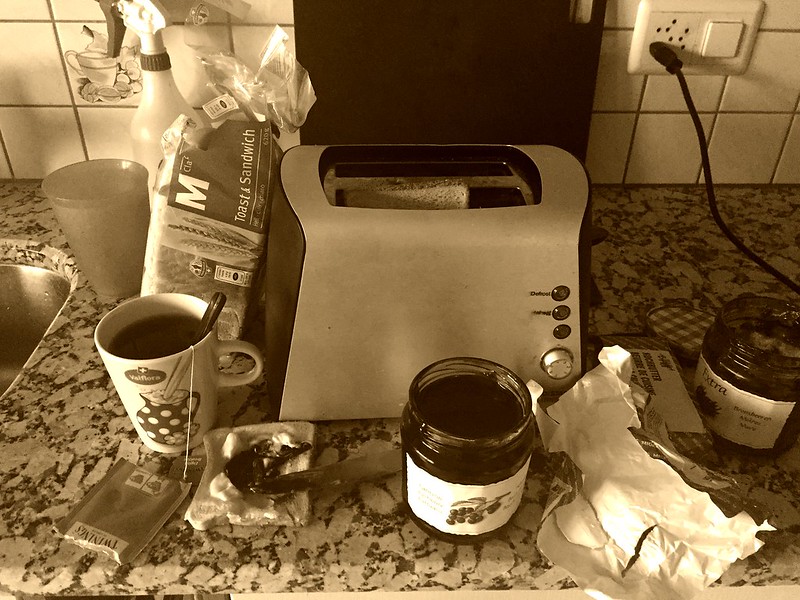 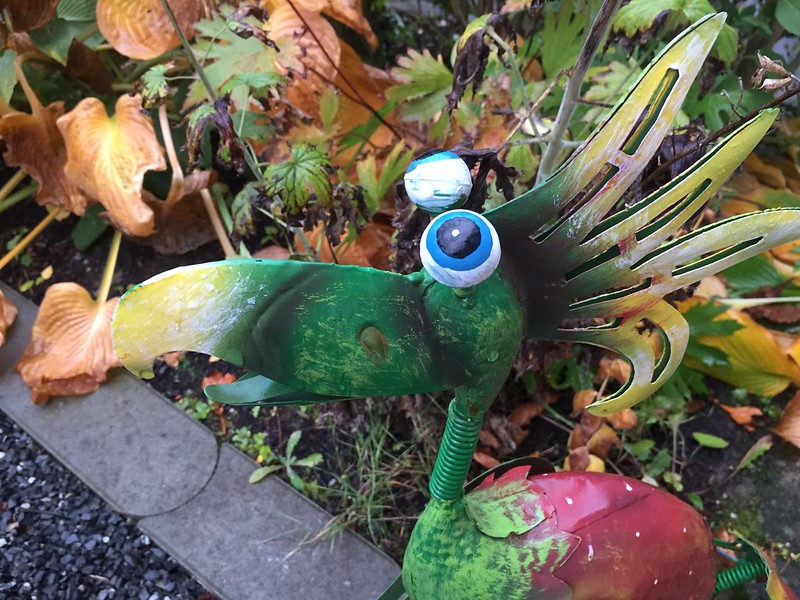 It all began with a meeting. Democratic decisions were made and it was quickly discovered that democracy is only for those that agree with each other. The minority that did not agree were those with the silver threads in the hair and too old to realise what it was all about. There was a second meeting and this one was completely democratic because those that were laughed at the first time with their grey hairs and senior pensions did not bother to attend.

The result of this democratic decision was that everyone had to bare with the uncomforable situation of being surrounded by a building chaos, but it was only 7-8 months, a summer of a golden oldie life. Eventually the work was finished and the chaos disappeared, although not quite. There was now a breath of fresh air in the chaos and you could have something that the others did not have, although at an extra price.

This shed a new light on the situation. Democracy was no longer called for, the dices had fallen and there was freedom of decision if you had the money to go with it. People are not all the same. It can be quite droll when a staunch opponent of a democratic decision finds that it was a good idea after all, especially if they can have something the others do not have and are pleased to tell everyone how nice it looks.

After all the discomfort and inconvenience was worth it. Droll isn’t it. 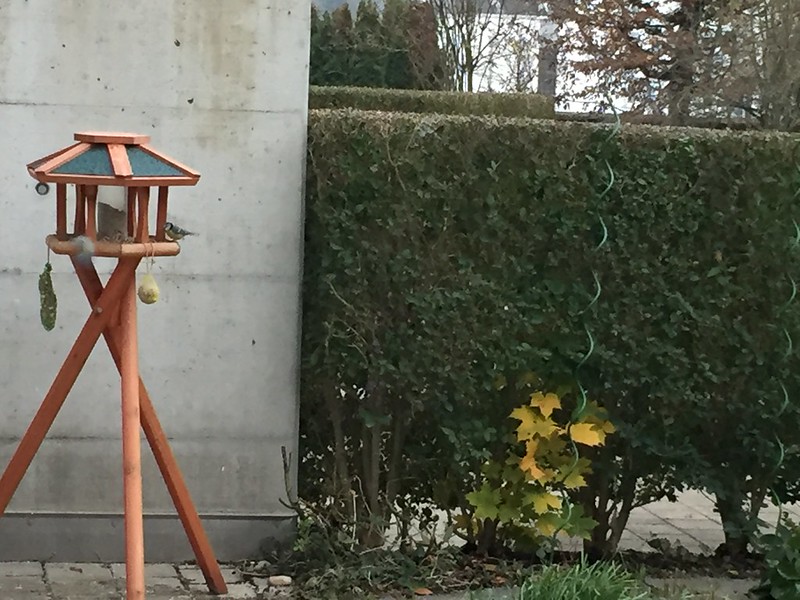 It is working and I am pleased. I positioned my bird villa in a different place this year. On the edge of the garden on the tiles. I always had it further away amongst the trees as it seemed that the birds were timid to get too near the appartment window. We have had workmen busy around us and this part of the tiling has not yet been completed. I tried the villa in a  better place to be able to clear away the husks of the birdseed and to stop strange plants such as hanf (yes that too) and other weeds growing in my flower bed. As I only use my mobile phone camera in the morning for a quick upload of an actual shot I could not get closer, but managed to show a great tit having a few pecks.

The birds are all here again and it is wonderful to watch them in the morning. They sit in my various small bushes and trees at the edge of the garden and fly over for a peck. I have a hibiscus tree opposite my window and always leave the seed pods on it in Autumn. I now have at least 3 sparrows sitting on the tree branches. I also have a bowl of water near, actually for my cat, but when the cat is away the birds will play. This photo is from last year, but the same thing happened yesteday. 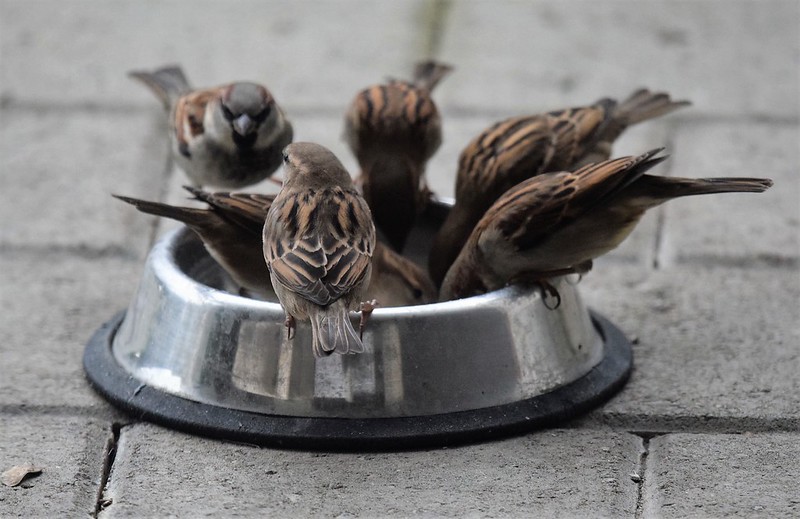 Even birds have thirsty work and need a drink in between. 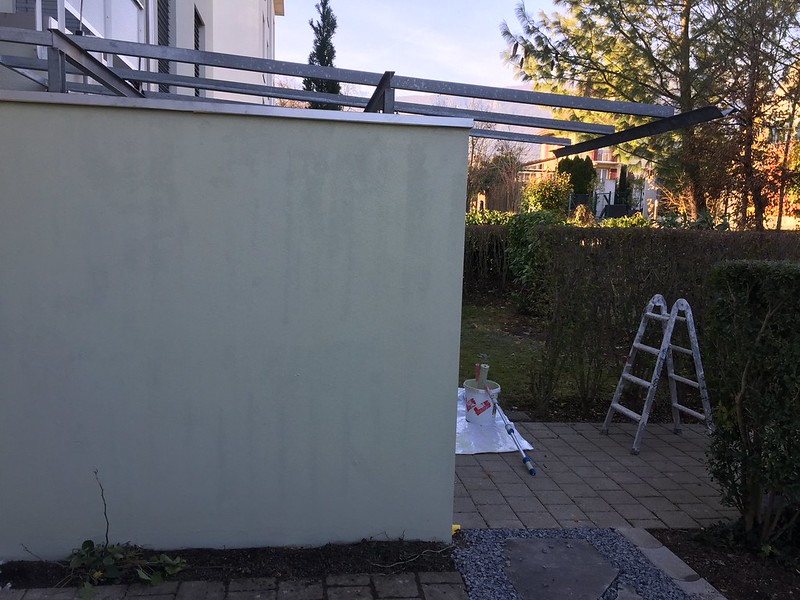 Another troop of builders arrived yesterday. We had a cover for our entrance before the invasion began with a transpaprent roof on it. The main idea was to cover our letter boxes and protect them. It was never a very good idea from the beginning, a faulty design resulting in wet newspapers and letters, but it is being replaced. I notice this time an extra drainage has been added at the end, probably to collect water. I now have a wonderful front garden and the workmen deposited two long pieces of metal in my garden until they needed them. Needless to say we told them that our garden is no longer a parking place for their material and they can put it in the next garden where the appartment is empty. I think we made our point clear as it was removed immediately.

The painter also arrived. He had to wait until the better weather arrived, as painting in the rain was not ideal. He has now completed our small walls in the front garden: again a wonderful shade of green, although the photo does not do it justice. 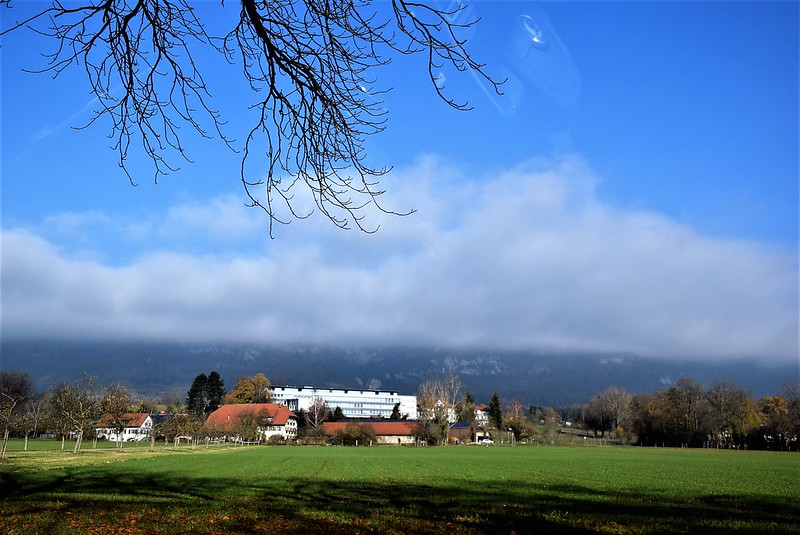 Otherwise they let me out again yesterday. The Angloswiss couple were again on their way to the supermarket. On the way I noticed that the clouds were hanging over the Jura. In case you are wondering what the large white building is, it is our local psychiatric clinic. In front of it is a farm which belongs to it all I believe.

In the meanwhile I began my re-read of “The Day of the Triffids” by John Wyndham. For a fantasy/sci fi book from 1951 it is a very good read. I have an idea that Stephen King might have picked some inspiration somewhere. I cannot remember the exact words in the book but the story teller tells us that at one point in their development the Triffids pulled up their stalks and began to walk. That was when it got dangerous. I am really enjoying this book, but do not plant any triffid seeds in your garden, they are not an easy plant to have and have a fatal sting.

And now back to the normal world, or is it normal. The triffids are amongst us, do not forget. In the book it was a Russian development, but in the fifties you blamed everything on the Russians.

Enjoy the day, keep safe, look after your computers. I will leave you with a mysterious cloud hovering over the Jura mountains behind my home (perhaps it is triffid seeds). 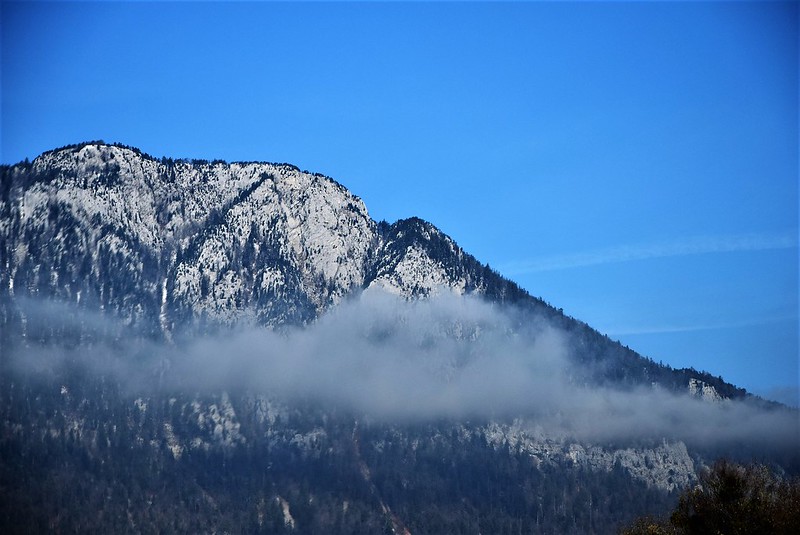