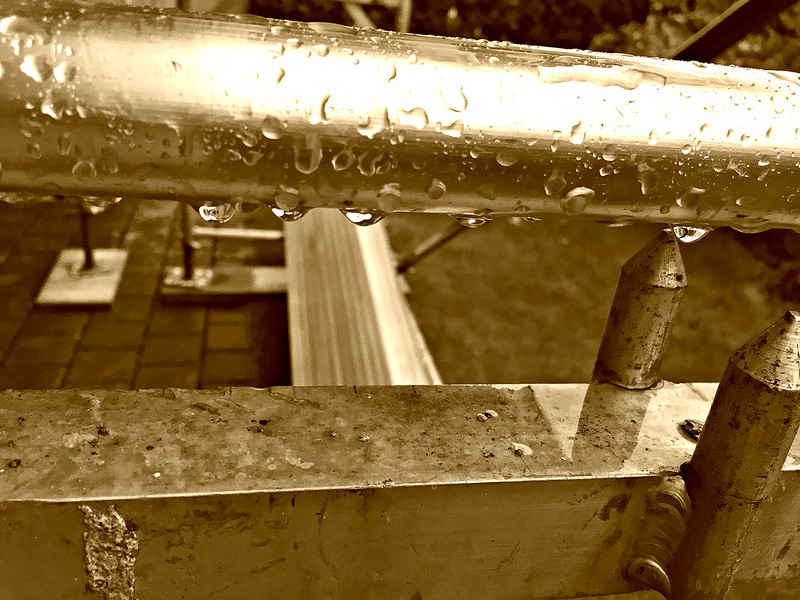 It was in our building days and so I called it Rain on the Scaffolding. It seems so far away now, but the scaffolding was only removed a couple of weeks ago, we lived with it for more than half a year. 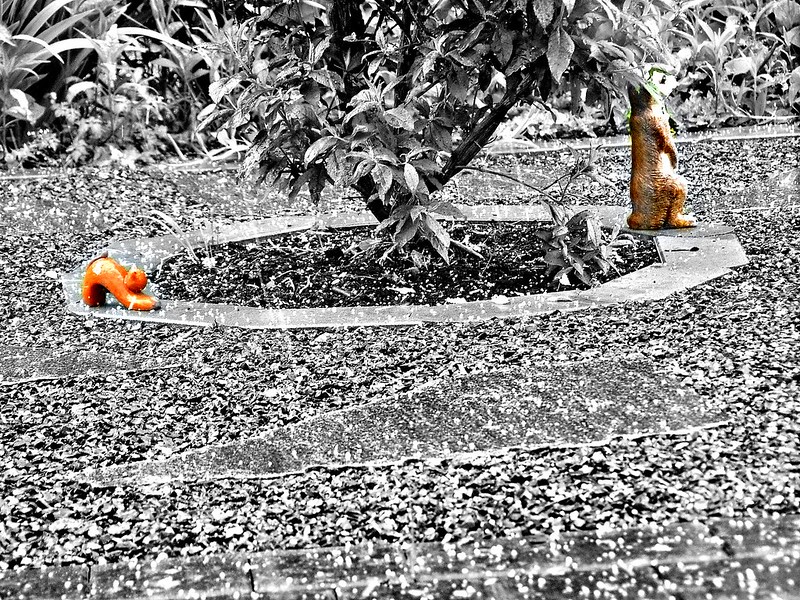 I was in the right place at the right time to catch a hailstorm with the camera. 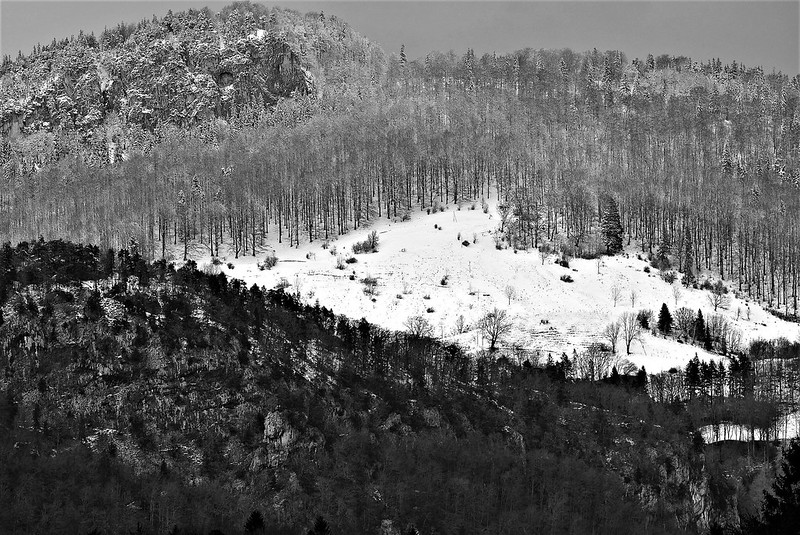 A snow fall on the Jura mountains. 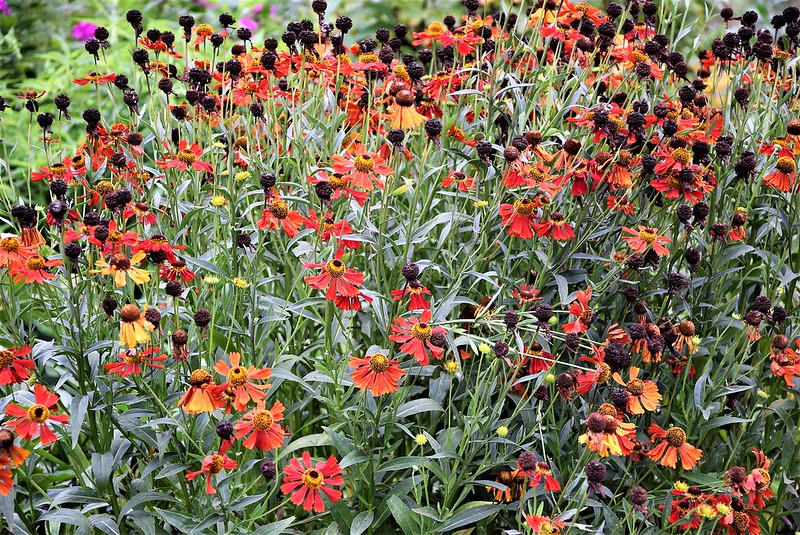 I am not really sure what these are, but could be rudbeckia. They were growing in a garden in my son’s village and I just had to take a photo. 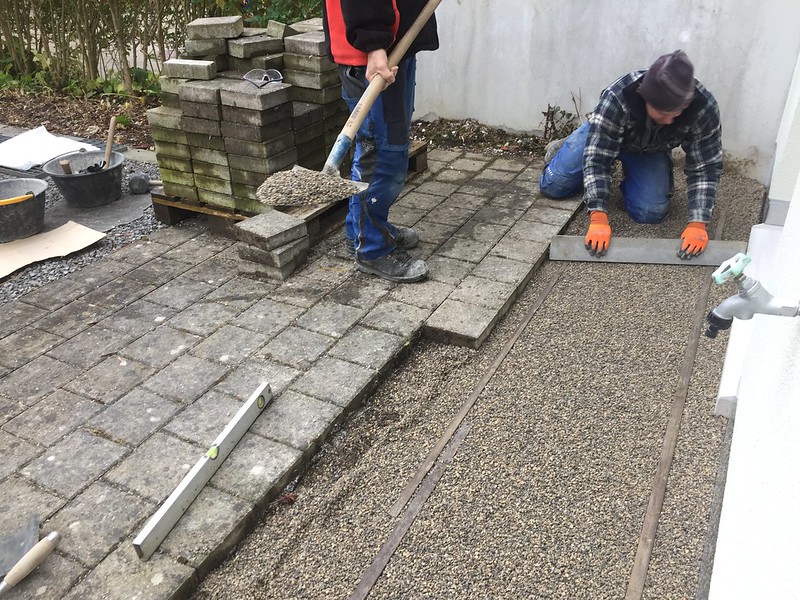 It seems laying tiles is not easy, it all has to be measured to ensure that everything is nice and straight afterwards. 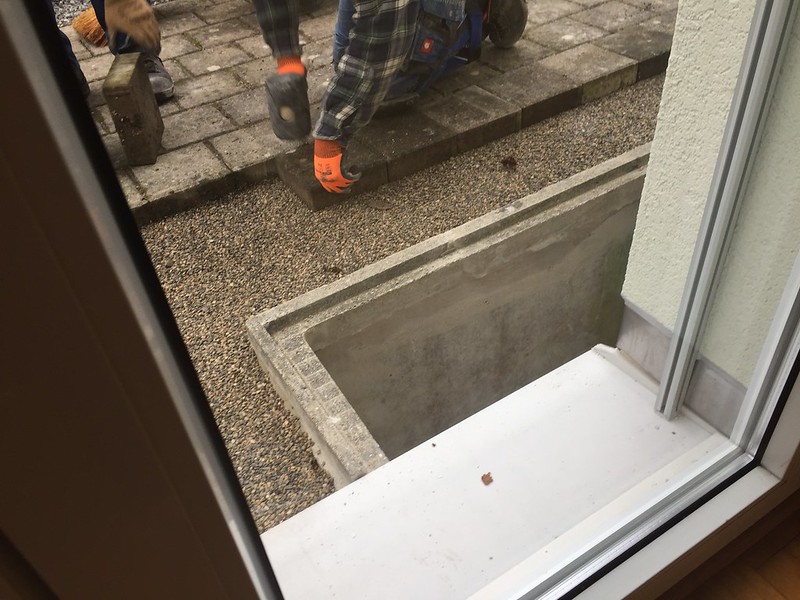 Each tile must be hammered into place.

I will be glad when the work is done. We have a pile of tiles in the corner of the garden and now they will be removed leaving space for my plants to breathe. There is one small problem it seems. 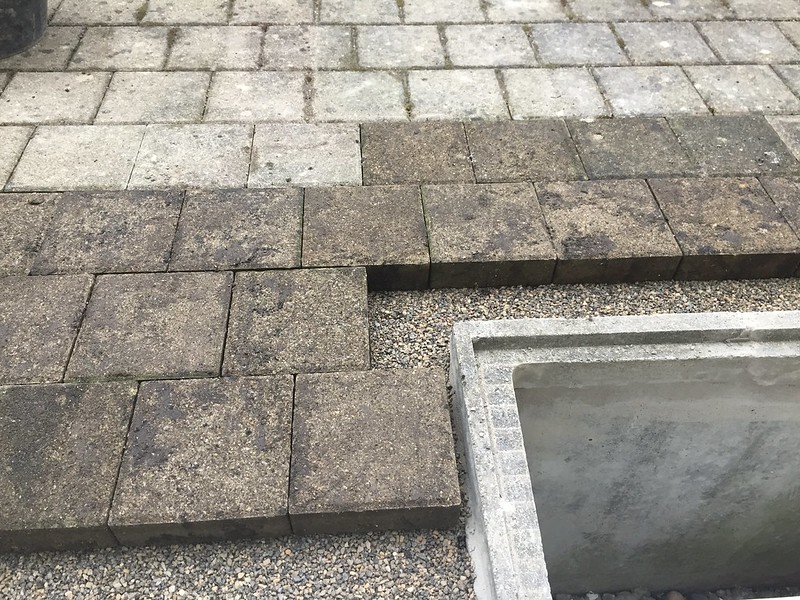 We now have either too many tiles or not enough tiles. The main tile laying is finished but there is a strange space on the edge which was not there 7 months ago. As we still have a pile of tiles in the corner waiting to be fitted, we have come to the conclusion that things have shrunk in the meanwhile or perhaps the space has grown. Our gardeners have now left us and I could hear the sound of an electric saw in the distance, which probably means that we are now getting tiles that will fit the gaps left behind, made to measure. In the meanwhile one of the workmen is measuring the size of the spaces. 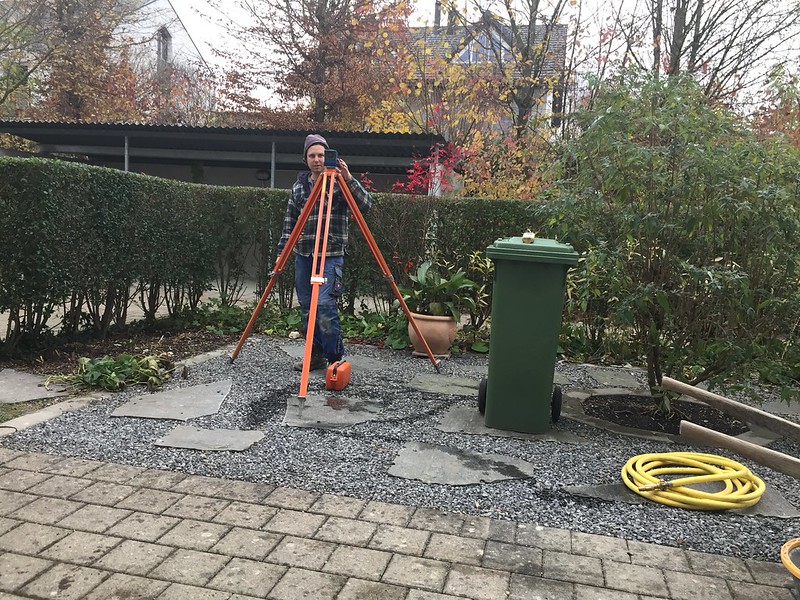 However, no worry. Everything is being calculated carefully with this instrument, which I believe to be a theodolite, so what could possibly go wrong. Something has gone wrong as one of the workers has returned with the newly cut tiles to fit, but they do not fit. Did I hear Mr. Swiss similar profanties? It is human. It is becoming a very exciting situation. I am sure at the end of the day we will again be able to leave our home through the open window in the front garden and walk over level ground to reach other parts of the estate. I am sure my cat Tabby will be pleased. She has spent the past months leaping over a ditch to get to the other side.

Daily Prompt: Gingerly does the job 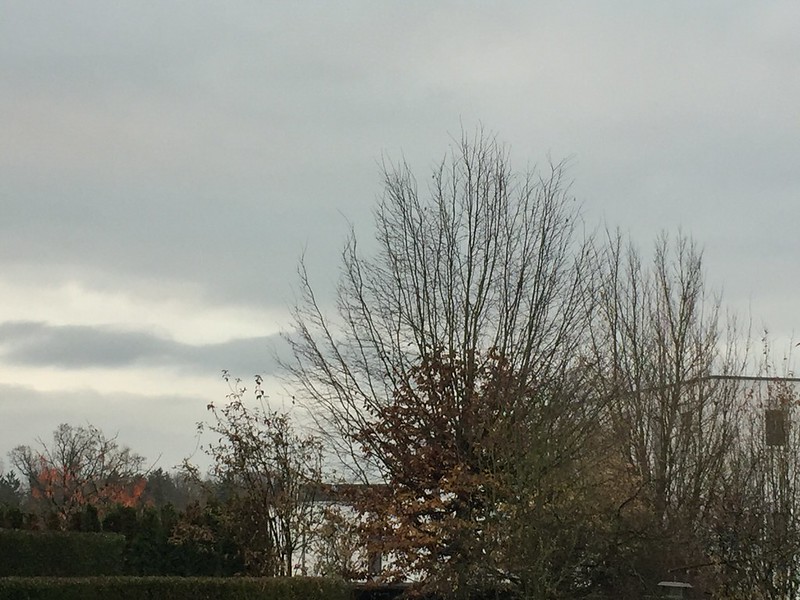 I got a cloud this morning. Not a big deal, but it was on the horizon, so it might be the shape of things to come. Everythig is damp outside, but it is not raining so we might even get a bit of sun. According to facebook it will be sunny with clouds, although according to facebook a lot of things are happening, which do not happen.

I am annoyed with my birds. I feed them with bread remainders in the morning and as soon as I appear with a camera, even in the background, they fly away. 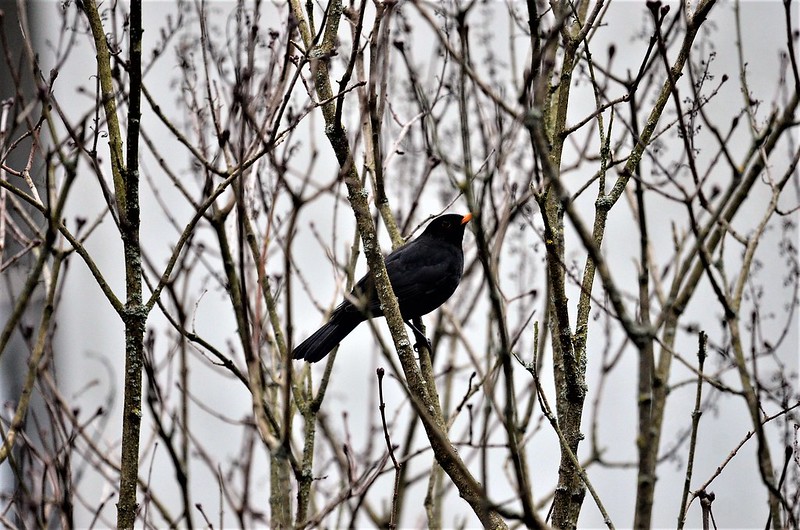 However I managed to capture this blackbird yesterday sitting in the tree opposite.

I am a little bit annoyed with the Swiss government. It seems we are running out of fighter planes and need a few more. It has been decided to spend 8 billion on them, just 30 or  40 jets. I did not decide. However it could be that one of our political parties decides that we should have a referendum and will begin to collect signatures. One of the advantages of living in a direct democracy.

I asked Mr. Swiss who wants to attack us. He mumbled something about being prepared.  I have decided to buy myself an electric wheelchair as I am no longer able to go out alone, being worried about falling, which has happened twice lately. I also want to be prepared. My left foot seems to detach itself now and again from its leg. So I made my decision, have ordered my wheelchair. Of course it is an expense, but I am lucky to be able to afford the 7-8000 francs it will cost. I do not expect any help from the Swiss government, I am only a normal person that has to pay my taxes. However, I was advised to enquire whether I would be entitled to something from the IV (invalide insurance). It seems I should ask my health insurance whether they would pay a contribution. I have no big hopes, but you never know and asking does not hurt. I am not really prepared to discuss it with them, either they pay something or not. Perhaps if it was fixed with jet propulsion I might be entitled to something from the Swiss government. 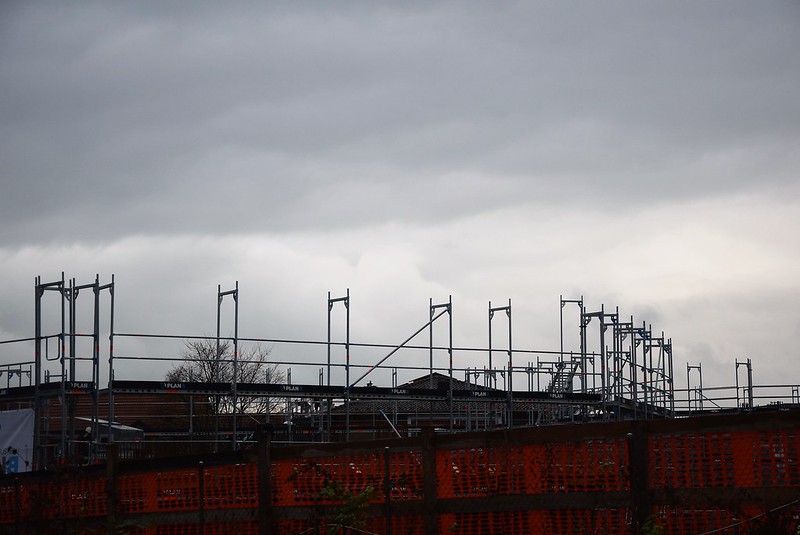 They let me out yesterday to visit the supermarket. On the way I now pass a new building site. I took photos of the old appartment block  being destroyed about half a year ago and the cranes being used to build the new estate. It is amazing how fast things are built today. The ground floor outlines have already been built and they are now beginning the first floor already. It is interesting to see how it is developing, especially as Mr. Swiss lived in the original appartments with his mother in the fifties.

I just finished my Terry Pratchett Book “Witches Abroad” the twelth in the Discworld series which did not disappoint me, and so I had a decision to make, what next? I like to vary my books and I decided it was time to read another James Patterson novel in the Alex Cross series. He is a police detective/psychologist and some of the books have been filmed. Again I am reading one after the other in the series and am now on book 6 “Pop goes the Weasel”. Actually it does not have very good critics: too many short chapters and nothing very much happening at the beginning, but I decided to carry on undaunted. What someone does not find so good, I might like. I like short chapters, and already have 100 pages behind me and find it a good story.

And now to laze around and do the normal boring stuff like taking the vacuum cleaner and the mop for a sightseeing tour of the appartment. It’s spaghetti today, so what could be better and possibly go wrong.

Have fun, watch your clouds, they might be doing something interesting. 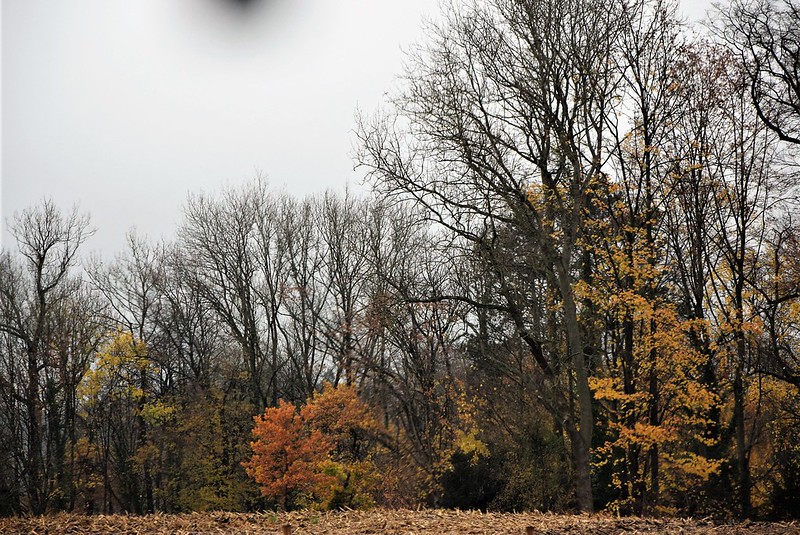