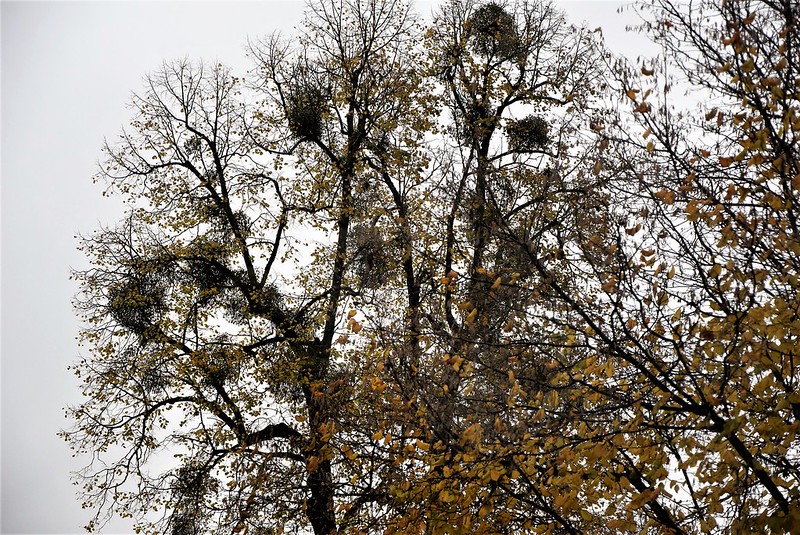 They have returned, yes, the clumps of mistletoe on the trees are back. Of course they are always there, no-one removes them, they belong to nature. They arrive on the trees,  by seeds from their berries. They begin to grow and absorb water and nutrients from the host tree because they are parasites. These mistletoe plants have been there for years, the tree still lives and so does the mistletoe. In summer the mistletoe disappears, although it is probably still there, but hidden by the leaves of the tree. Now the trees are losing their leaves to Autumn and the mistletoe has returned: perhaps only temporary until Spring. 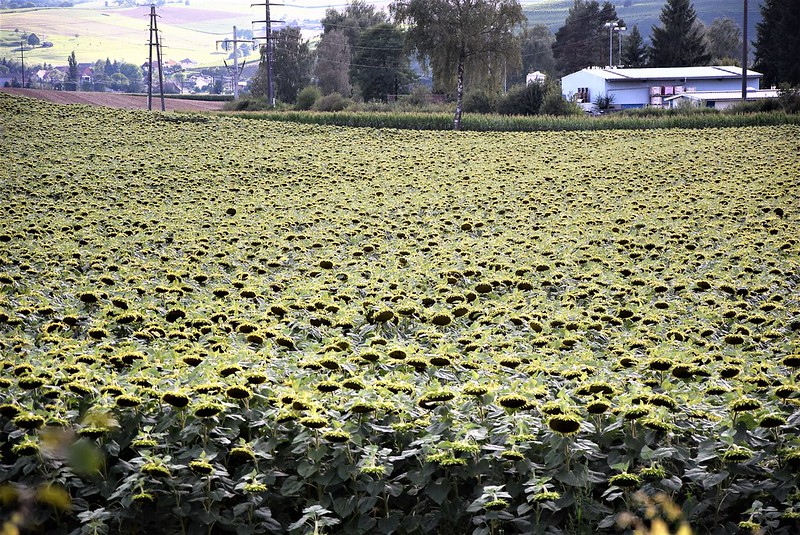 It is a field of sunflowers. My son lives in the Eastern part of Switzerland, Kanton Schaffhausen and they grow suflowers in many fields. The seeds are used for the production of sunflower oil. If I had been a couple of weeks earlier I could have captured the full glory of the sunflowers in bloom.

And that’s that, or it might be. The first thing that came to my mind was Paolo Conte and his song “Dancing”. Never heard of him? If you were Italian he would be engraved in your music taste, although some like him and some do not. I am not Italian, but can speak the language more or less, and somewhere on the way I discovered Paolo Conte. My boss was a young Italian when I was working and his mum loved Paolo Conte. It was my 50th birthday and we had tickets for his concert in Switzerland. It was the evening when the snow came, but we drove through the blizzard on the motorway, at least Mr. Swiss did and my boss in his car, and arrived more or less safely. It was a wonderful concert, Paolo Conte sang all his hits. Would mention My CD collection is to 80% Paolo Conte, another 10% Tom Waits and the rest a mixture.

My dad loved to dance. As soon as we had a family party, Christmas usually, he was the first on the floor and often dragged his daughter with him. He would be dancing from the beginning to the end of the party. It was not ballroom dancing, just jigging around to the good old songs and we would all be singing along. Of course “Knees up Muvver Brown” was included in the dance show, but there was never a cockney get together without that song a dance. We were all born and bred in the East End and cockney was our “ovver language”. Like “I ain’t got nuffing”, met this bloke dahn the frog and toad and let’s “ave a dekker at the black and white, but where’s me bins.”

I found this version by the Muppets, but it just about describes the essence of a cockney family having fun. the cap being worn by Fozzie bear is a typical pearly king hat. We even had our own royalty in the East End of London which was mainly for collecting money for charities. They were dressed in suits embroidered with sequins and very impressive. It was tradition.

Seeing this video brought many memories of the past back to me. I will now be 71 years old, and my cousins 70, 69 and 68. I wonder if they still dance Knees Up Muvver Brown, probably not. I often cannot get my knees up to stand from a chair. Aunt Lil and Uncle Arthur, Aunt Annie and Uncle Jim and Aunt Ada and Uncle Harry, as well as mum and dad, this one is for you. 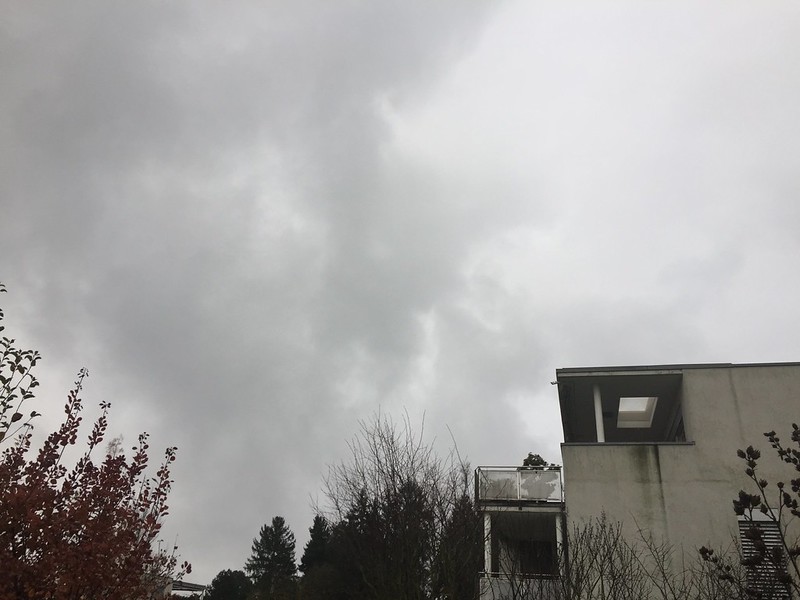 Where have the clouds gone? We have the rainy season and it is grey in grey. If it were at least 50 shades of grey it would be interesting. According to the weather prophets, it will remain for the week. The Autumn of shades of yellow, red and brown is now developing into the time of the leafless trees.

At the moment we have a little excitement. Our building battles have now been fought, we were under siege for 7 months. Now the gardeners have arrived and are busy filling in the spaces around our appartment. 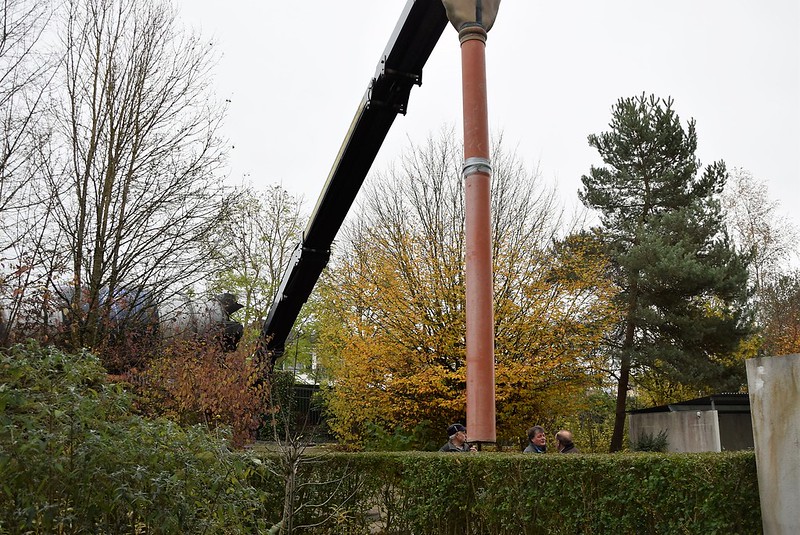 I was busy cleaning the bathroom and heard a noise outside that sounded as if we were victims of a stone avalanche. I looked out of the window and saw a small team standing below this monster. In the background you can see something like a cement mixer perched on a truck, which was filled with a mixture of earth and gravel. I soon realised this was the machine to fill in the spaces around our appartment. No longer is it done with a shovel and a wheelbarrow, but fully automatic. 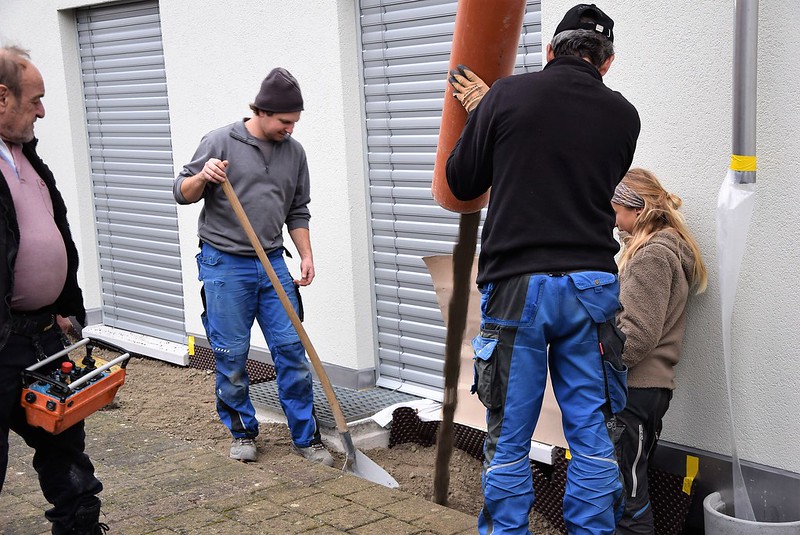 The material is mixed and transported along the long arm of the machine and enters the long pipe at the end. The workman then aims the tube to where the filling material is required and within half an hour the ditches are all filled. I was instructed to lower my blinds otherwise it could happen that a window might get a crack from the material. The young lady held a piece cardboard for protection of the blinds. It was done very efficiently. 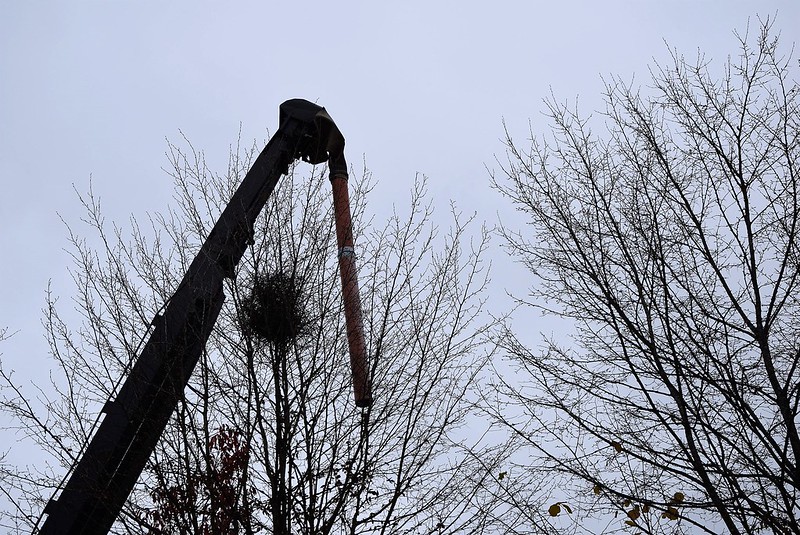 There was a precarious situation when the driver of the truck had to move the arm to reach our garden. There was a magpie nest in the tree and he was very close, but all being nature lovers he skilfully managed to avoid destruction of the nest, although I told him the nest has been in the tree at least 2 years and I am not sure if it is still used. 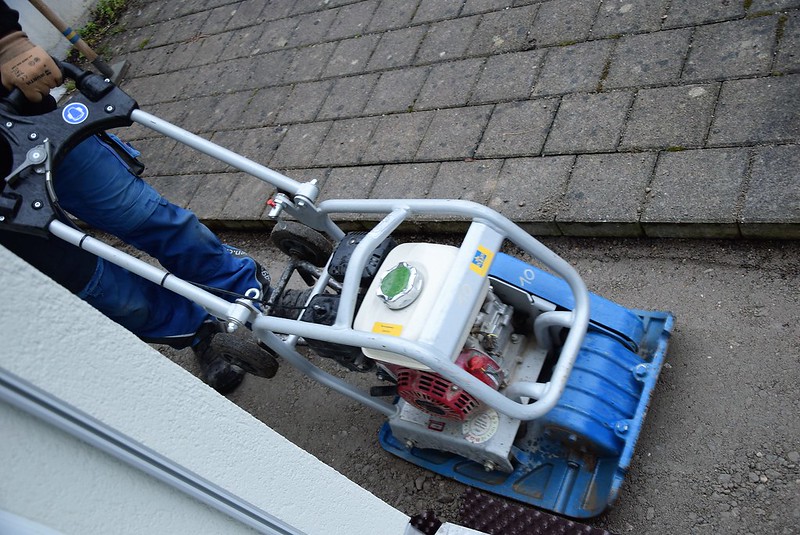 Afterwards the whole layers of earth had to be flattened to reach the level needed to be able to complete our layer of tiles. Everyone went home yesterday evening after this part was completed and today they will return to lay the tiles. When this is completed we can relax again. I will have access to my front garden from my appartment. There is still the other side of the appartment to be completed, but only general preparations and tile layig, no ditches to be filled with earth.

The chief architect suddenly appeared so I decided to use the opportunity. I had never been so close to this immortal since the work began. I explained about completing my garden with the hedge piece that I no longer wanted as I would prefer to keep the opening and have it covered with stones matching the rest of my garden. When my wheelchair arrives it will be easier for me to enter and leave. He was very co-operative. I had already spoken to the chief gardener and he was also there. It seems it would cost no more that replacing the hedge, which would actually be more work and we reached a very good agreement for me.

The positive side of the gardening work is that I now have over 1,000 photos of the whole building operation. It all just happened. When the first workers arrived to construct the scaffolding I was there with the camera and one thing lead to the other. Looking through my file I realised I have captured almost every step of the way. There is now the paint job ahead where they layer the end walls with their green paint. It seems they are still discussing which shade of green to use. In the meanwhile the weather has changed and it seems it is too wet for the paint to dry as it will probably be washed away.

And now to prepare for my Wednesday outing to the supermarket. There are decisions to be made in connection with food compositions. Enjoy the day, have fun and look after your computers, you will need them. 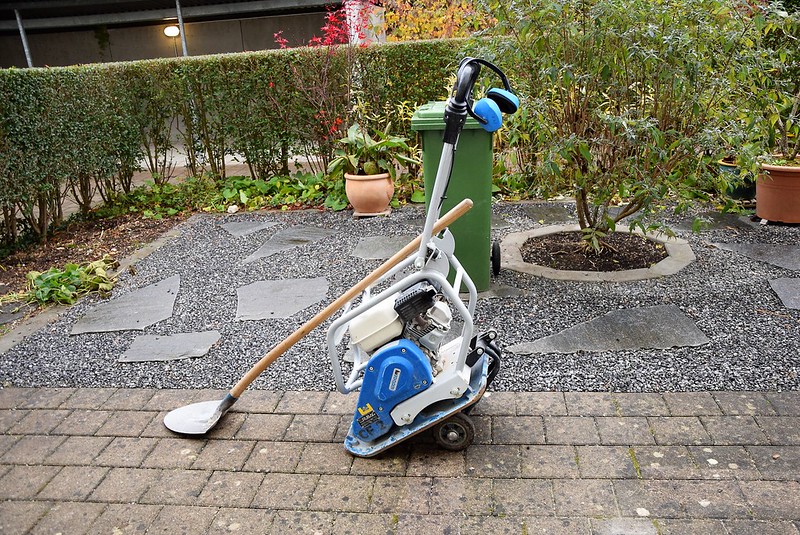