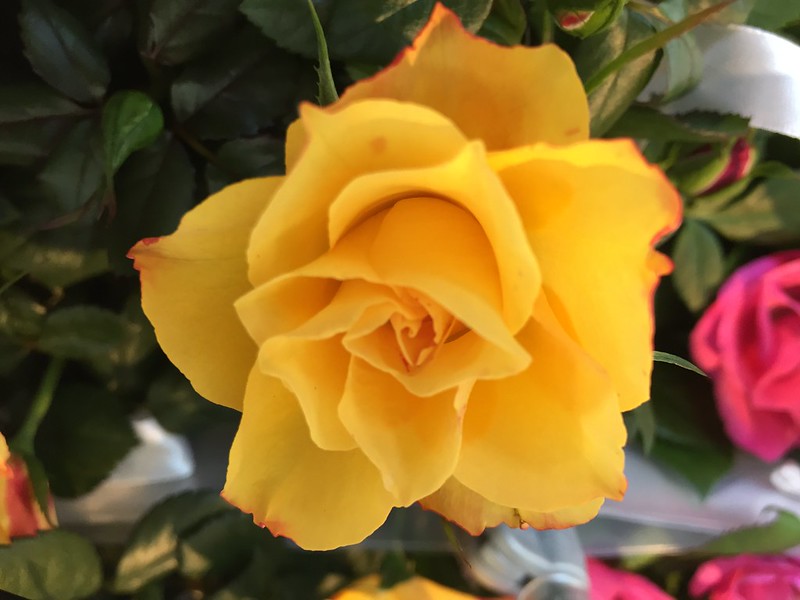 It seems I have been neglecting the roses, so here is one from August. 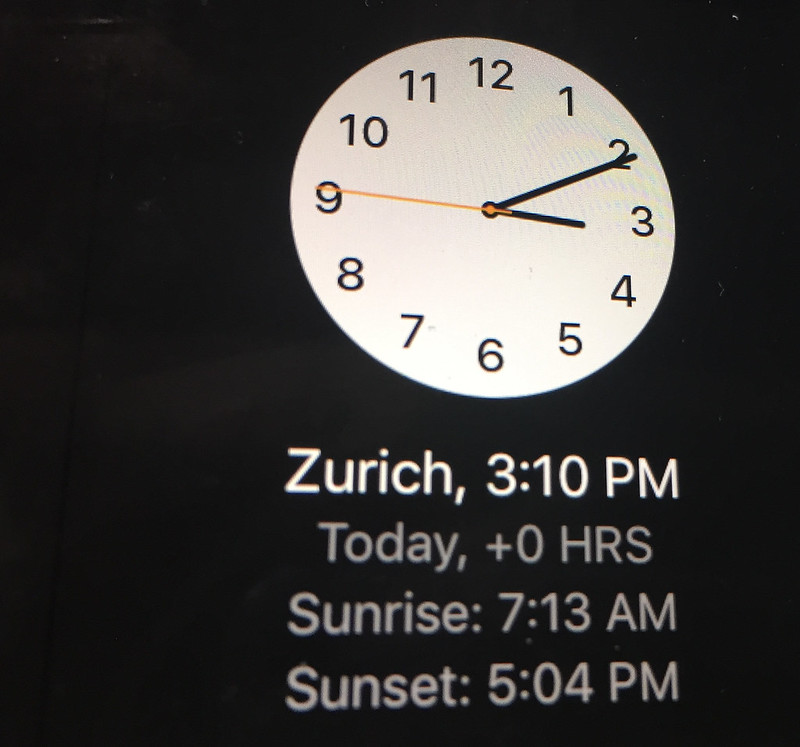 How to you know that it is I, me and myself writing this piece at some time after three in the afternoon. Of course, I have even taken an instant photo of my time on my mobile and did an instant upload on my photo site. This all takes time, but not so much time  and now we actually have 15:22 according to my iPhone. I no longer wear a watch, there is no point. I have an iPhone – modern online golden oldie and all that.

So I am now sitting at my computer and writing at the above time – a little later. But is it really me. Perhaps I took this photo yesterday, or last week and stored it for further use. I can even write my daily prompts by proxy. I could have written this piece yesterday and programmed it for today. We can do so much in advance today. I could be having tea with the Queen and appointed someone else to write this piece for me.

I see my favourite sitcom, my only sitcom on TV, every evening, The Eastenders. It is on the british channel at 7.30 english time but I watch it usually at 9.00 p.m. because Mr. Swiss records it. I remember the days when you had a TV and had to plan your life around the various programme times. I loved “The Avengers” the late Patrick Macnee being one of my teenage “hearthrobs” of the day, but it was televised late in the evening. The only possibility to see it was to stay up and go to bed later. Today I would record it.

We tend to play with time today. We do it all by proxy if you like We are not really there when it happens, because our electronic devices are proxy devices. I authorise my proxy device, a DVD recorder or whatever, to do it all for me and then I can watch at a suitable time. I am now my own proxy person. I cannot be there and so instead of engaging a person to do it for me, I use modern techniques. My programe is recorded and I watch the original when I have time.

Yesterday we were in the supermarket and there was a company demonstrating the new gaming system: a sort of hologram way of doing things. I was watching a young man demonstrating how we was gaming online in his own invisible world. He was holding a device and was swiping around with it in the air. As he was wearing some sort of head set resembling a reinforced pair of eye glasses with dark glass, I felt sorry for him. Perhaps he had a sight impairment. Suddenly a young lady, asked if I would also like to try it out. I decided walking with a stick was bad enough, but my sight is still good enough without wearing strange eye glasses, although it is apparently the new trend. Gaming has gone to a new level.

Perhaps all of this has nothing to do with proxy. I mean if Mr. Trump needs to employ a lookalike as protection it is his business, although I cannot imagine anyone in their right mind wanting to look like Donald Trump – just a thought.

I was not comfortable with this prompt, but can assure you that it is really me writing on my computer.

Daily Prompt: Is it really me 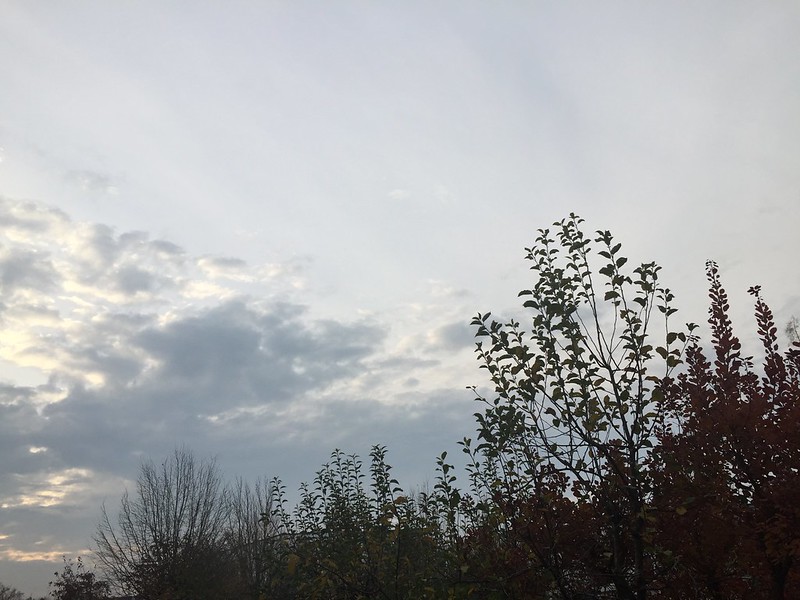 The first words from Mr. Swiss this morning, he was no longer hugging the bed but I was, was that it was quite cloudy. This naturally gave me a reason to stop hugging the bed and take a photo outside. It was cloudy, but not cloudy that I mean cloudy. I envisioned patterns of cumulus clouds driftig across the sky and perhaps even a few interesting stratus objects. Instead there were patches of grey with the sun doing its best to push them on one side.

Actually this morning was not such a good start for me. I checked the time on my iPhone clock and realised that 5.57 was a good time to be awake and check through my various blog sites and e-mails. Everything went well, I was on the last stage of my virual journey reading the local newspaper when my alarm began to ring, not really bells and whistles, but a mixture of bird song. I have three alarms all at the same time: my iPhone, and two iPads although the older iPad often gives up due to old age. This could not be true, I had a full hour and more to scan and it was already 7.30 a.m. Mr. Swiss appeared and he confirmed that it was almost 7.00 a.m. when I re-entered the real world, I had read the number six for a five and had already lost an hour before the day begun.

OK, I know not so tragic. A golden oldie does not have to watch the time, although it runs out quicker than you think. 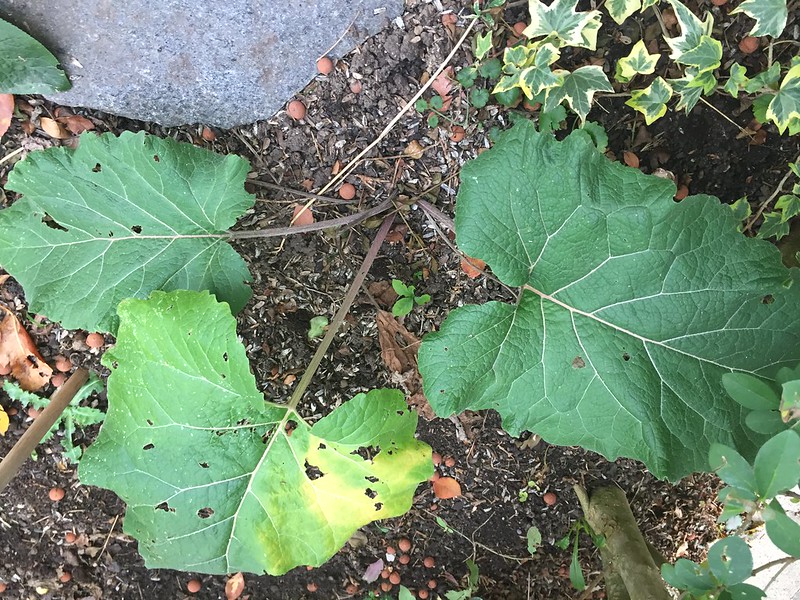 Whilst I was taking photos of the sunrise I took a few more. This plant is growing on the edge of my garden in a small border. I do not know where it came from, but does not really resemble a triffid, so it was not a refugee from another world. I even asked my gardener the last time he was here in summer and he gave a few suggestions, but was also very unsure. I first noticed it in Spring and it has quite large leaves. I decided to leave it to grow hoping for a spectacular large flower, all plants have flowers don’t they? 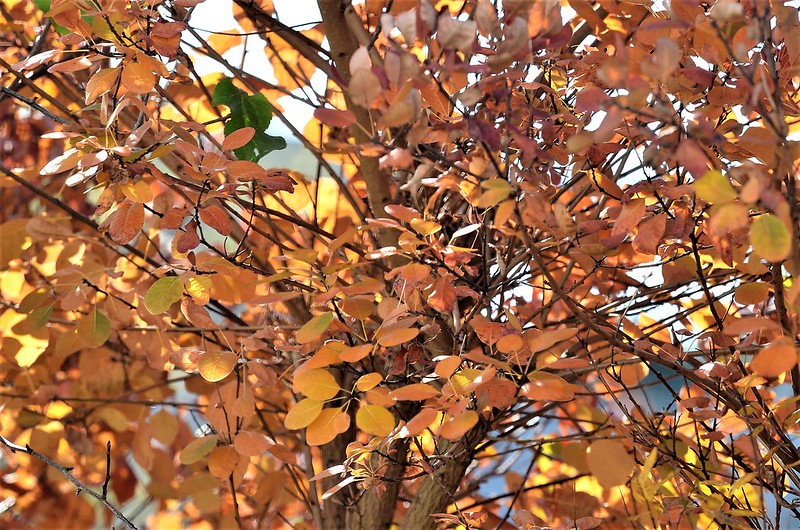 Otherwise nothing really interesting happening in my neck of the woods. Yesterday being Friday evening the weekly late night Swiss political discussion was on the TV. I do not really concentrate on it as I have my nose stuck in a book, but I do get some bits and pieces. It seems that the idea in Switzerland is to abolish the state TV and radio system and let it all be done privately. Having three main languages in switzerland it means 3 organisations for the TV. Everything would be cheaper for the normal people like us. It will be put to the public vote – again. The last time the suggestion was not accepted, but by a small majority and this time who knows. I am not sure if I want to live in a Fox news State where you have to separate the real news from the fake news.

As said, I was reading my latest Terry Pratchett novel, Witches Abroad, another episode of the Disc World series and that made more sense to me than the political programme on the TV. I least I could laugh now and again.

Due to my delayed beginning to the day I must now move on. There are things to be done, like vacuum cleaning and cooking and even some ironing. Have a good day, enjoy your Saturday and if you are bored, there is always a computer waiting for you.

I will leave you with a photo of our house mountain, Weissenstein, taken yesterday on the way to the store. I only took the photo because of the cloud formations. I am a cloud watcher. 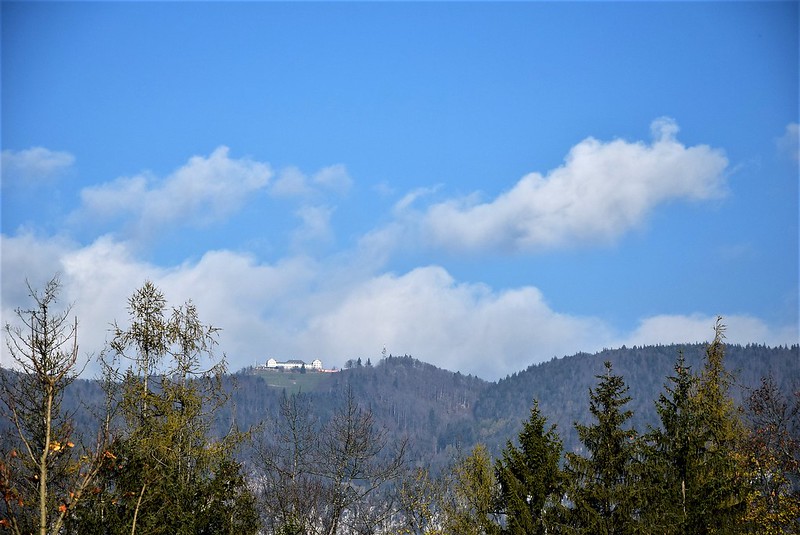