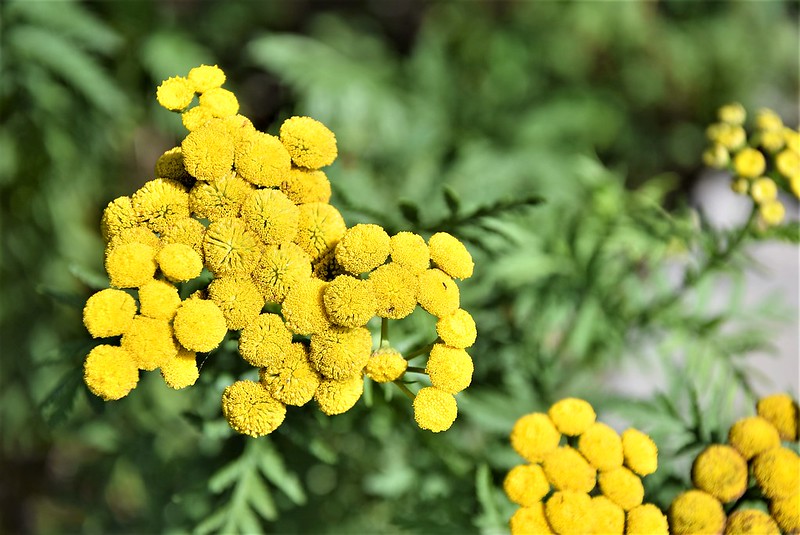 We call it “Rainfarn” in German. It is usually regarded as a weed, perhaps because you often find it on the side of the rail tracks. However, it is beneficial to the garden apparently, but as not sure why. I got myself a few plants from the market from a herb seller. Unfortunately my neighbour decided it looked weedy and mowed it down one year, although it would have survived. However as compensation he bought me 10 plants and now I have a wonderful field of Tansy at the side of my garden: nothing special, but I like its button flowers in Summer. 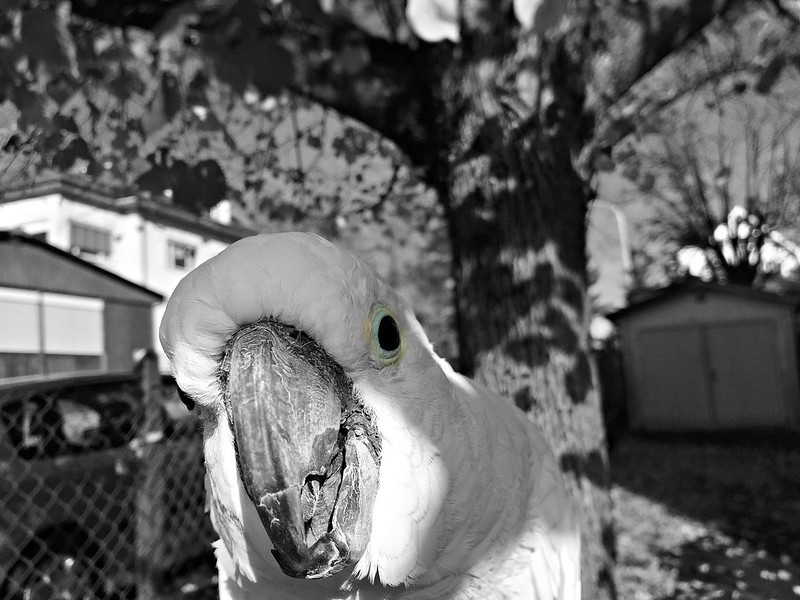 It’s Öttu again, the cockatoo where my son works. 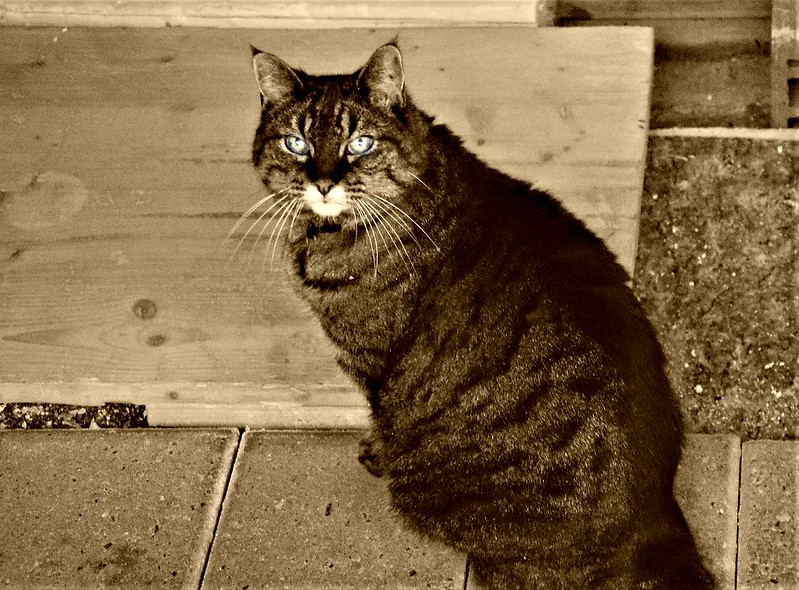 Tabby my cat, just being Tabby 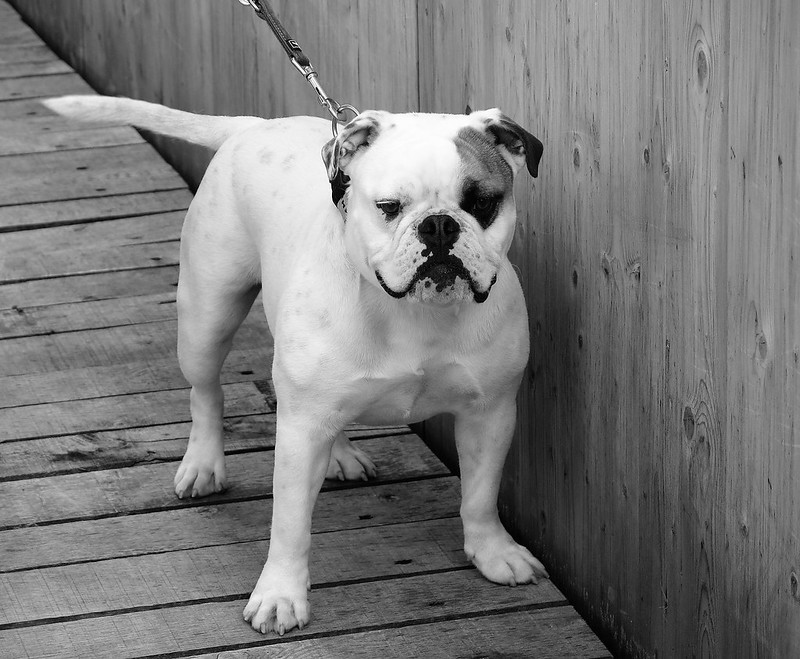 If you happen to meet an english bull dog you take a photo of course. I met this one on a walk with his owner and asked if I may take the photo. 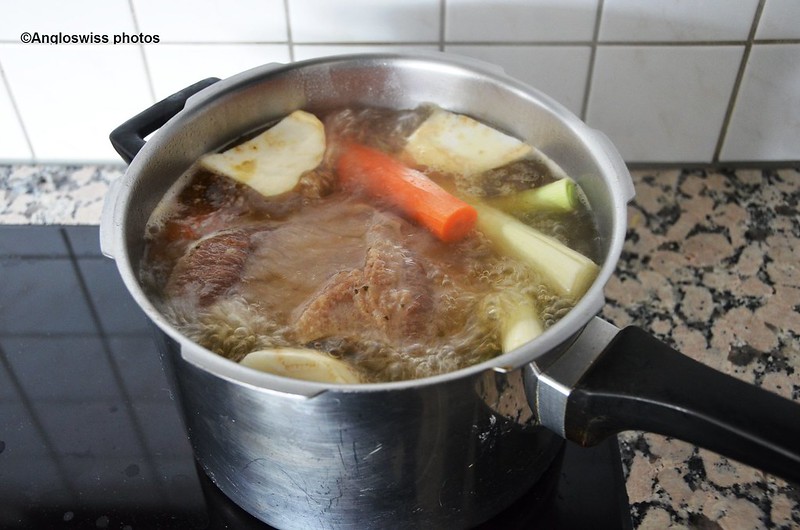 I like cooking simmering food, especially on Sunday. It fills the home with the smells of leek, carrot, celery, cabbage and meat juices and there is no stress. Boil water with some bouillon (meat extract), and when it is bubbling drop the meat into it and let is simmer for at least three hours. If you are up early enough it works wonderfully, because you can forget the whole thing until lunch time. Perhaps even catch up on the sleep you missed because you had to start simmering dinner.  Drop the cut veg into the pot half way through and the rest just … well, it simmers. There is a nice quiet relaxed Sunday morning with no bother about actually cooking, because it cooks itself.

Of course you have to peel and cook some potato towards the end of the simmering process, but that is quickly performed, especially if your cook your potatoes in the micro wave – which I tend to do. They need no water, just a sprinkling of salt and they cook in their own juices, but this is developing into a cooking blog which I realld did not intend.

Sometimes there are other reasons to simmer, just like now. I was simmering in sleep after lunch, oh it was wonderful. I had sunk into the depths and it was comfortable. Even the road machines that had suddenly appeared from nowhere making their soothing huming noises did not bother me. They were further afield and simmering on the road surfaces and I slept on. I awoke and decided to stop hugging the bed as there was a daily prompt to write.

After a midday sleep I like a treat, something to eat, something a bit different. The cupboard was almost bare, but I remembered my Ragusa – a small Swiss chocolate delight. It was some sort of celebration in the supermarket and they were giving them away. as a treat when you left the store, so we had two, one for me and one for Mr. Swiss: they were the mini versions. 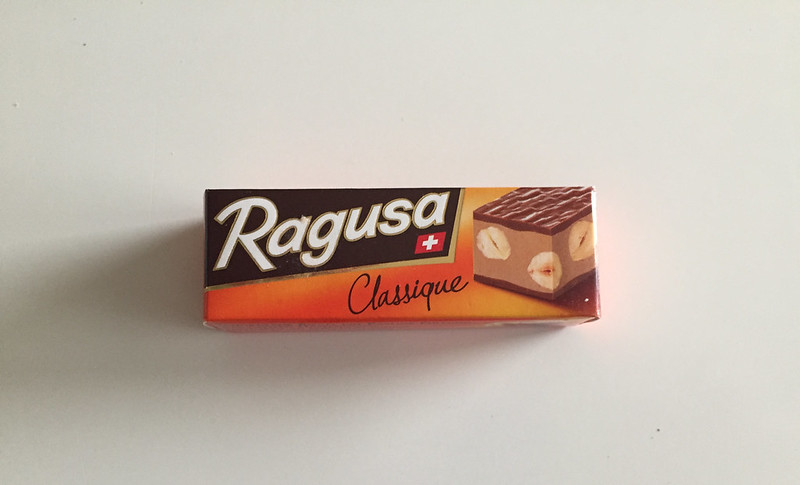 I do not really like them. The have a chocolate covering and filled with a sort of fudge mixed with haselnuts. It is a Swiss thing, but if it is free then why not? However, if you keep it in the cold, the fridge, then they stay firm and cold and I can eat them. Mr. Swiss, being Swiss, eats them preferably at room temperature. So I put mine in the fridge and what Mr. Swiss did with his was none of my business. I decided today was the day. It had been simmering in the cold temperatures for at least a month. Unfortunately my Ragusa had disappeared, a victim of halloween, or who took it? It seems that he who will not be mentioned came, saw and took it. Surprisingly the other one, that which was kept in room temperature, still existed in the kitchen cupboard. After a few words of discontent, I replaced my missing eaten Ragusa in the fridge with that in the cupboard and will keep my eye on it. Of course I could not eat it today, as it must simmer in low temperatures for a while, because I only like them cold and not a soggy warm mass from the cupboard.

Even I can simmer now and again. 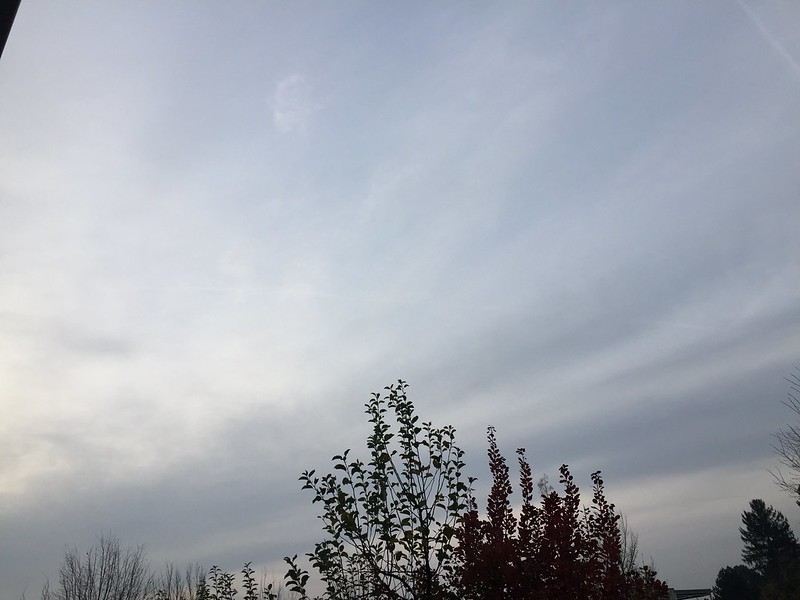 At least the sky has a little structure this morning, I wish I had some structure as well.  My weekly routine is a little mixed up as yesterday all the working people had a free day, meaning that my supermarket was closed. Thanks to strategic online cloud phone planning, the shopping was performed in advance by Mr. Swiss and I. Unfortunately we forgot to include yesterday’s meat. There was plenty of vegetable available but nothing that would fit in. And then lo and behold, we found cervelat in the fridge. If you are Swiss and have cervelat, then your purpose in food consumption is filled.

Cervelat are a Swiss sausage that can be eaten cold in a salad or fried with accompaniments. Our lunch was saved and if No. 1 son has a cervelat, he is more than happy. We notice these things happend more as we grow older. Often it happens that the other one thinks that the other one has already  bought it and the other one is of the opinion that the partner has dealt with it. The golden oldie misunderstandings of life. 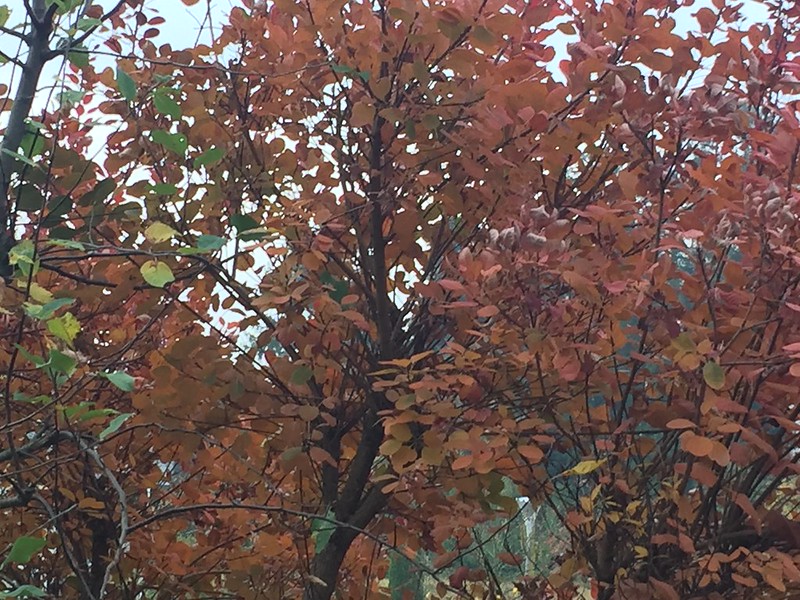 Our garden is now in the last throws of Autumn, this smoketree being the last one to go down. I planted it a few years ago for an edge to the garden, but it has become more than an edge and is now an established part of the garden.

Our painter, the last remnant of the building troop, is still hovering around. After washing down the wall at the end of the garden he is now beginning to grind the walls with some sort of machine. I have cleaned the bordering window every day this week and it looks like today will be no different. Mr. Swiss said let the blinds down, but I reminded him that cleaning the blinds was a little more complicated than wiping over a window. As the job is not being done by the Speedy Gonzales of the painting team, it will probably be tomorrow until he reaches us. 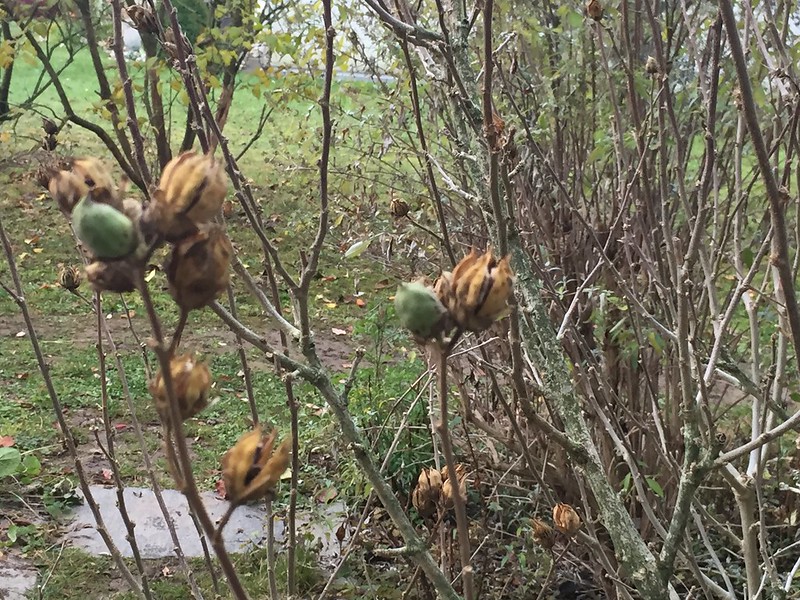 At the moment I am not going places and seeing things so my current photos are local. Today will be a day of more or less rest and tomorrow we will attack the week-end shopping. I was thinking of accompanying Mr. Swiss this moring on a short shopping tour, but decided to stay at home and clean the shower, much more rewarding.

I was suprised that the Swiss Government have now offered the ex-leader of Catalonia in Spain refuge as the Spanish no longer want him. He decided to call independence for the Catalonians but Spain is not very happy about it, and I have a feeling that not all Catalonians really want it. He is now being charged with rebellion and a couple of other problems, and so he was suddenly in Belgium, but not requesting asylum it seems, just avoiding trouble. We are getting reugees constantly in Swizerland from various oppressed countries, but it seems we still have room for Mr. Carles Puigdemont. We all have our opinions about the world refugee problem, and I really do not want to be political, but if they had a good job and probably are not the poorest then why not. Perhaps Mr. Carles Puigdemont can pay his way. He has not yet reacted to the invitation.

And now to leave you with another one of my Niderbipp excursion photos of the Jura from my visit on Tuesday. Enjoy the day and beware of painters, they attack clean windows. 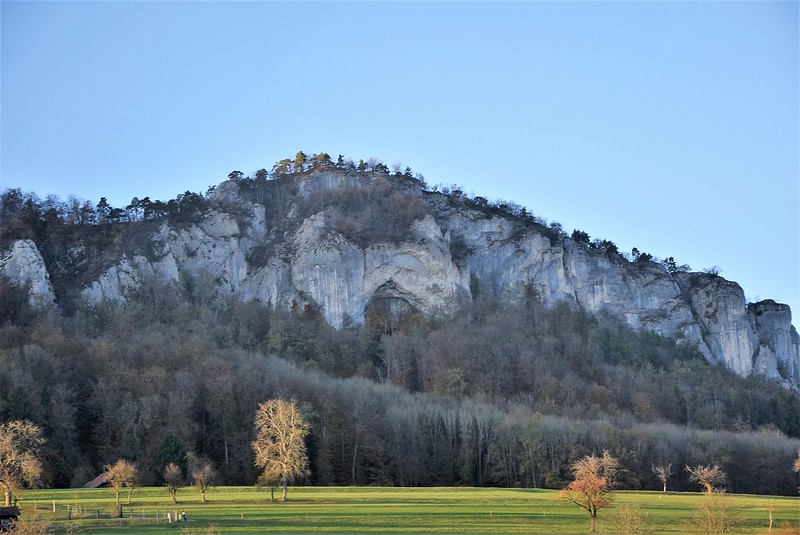