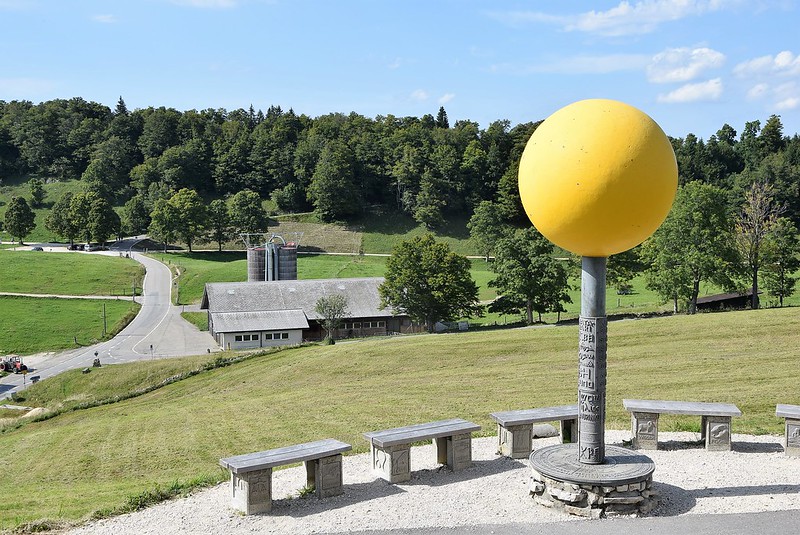 The beginning of our planet path on the top of our local mountain Weissenstein, Switzerland. This ball represents the sun and as you walk the trail there is a model of each planet on the way, all spaced out according to scale. 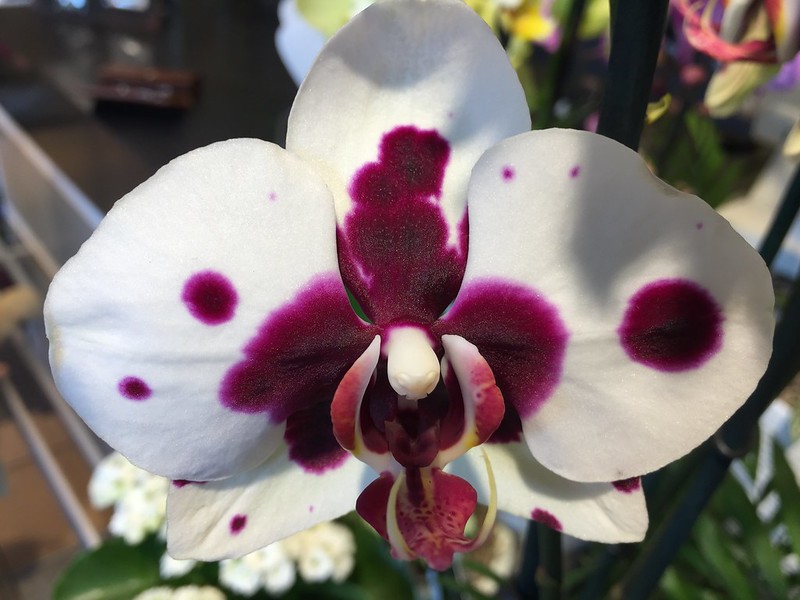 These orchids can get quite scary, especially when halloween is approaching. 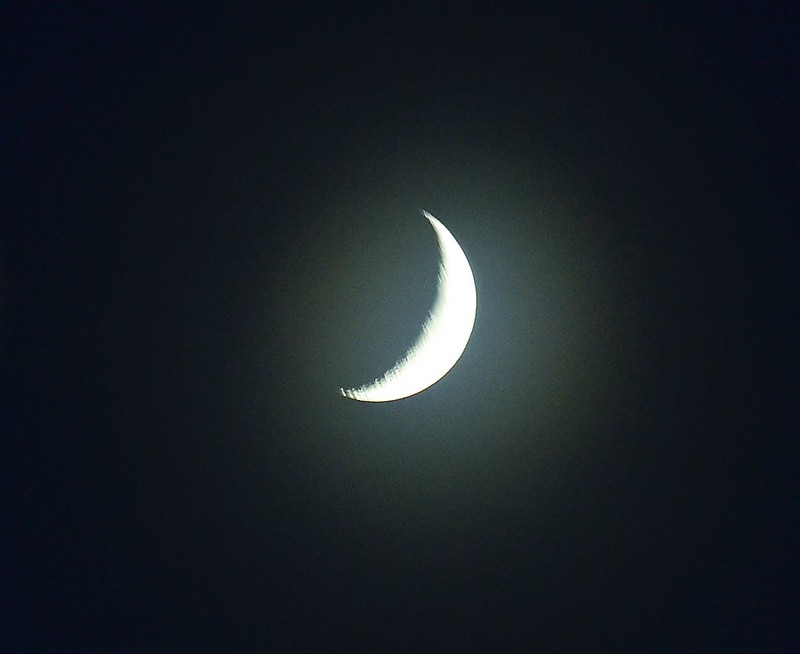 This is yesterday’s moon, just a wedge of cheese, nothing spectacular. Mr. Swiss called me, he was on the porch and it was getting dark.

“Come quickly with your camera, you can take a photo of the moon.”

I obeyed and grabbed my organised camera with the zoom lens. There was no point in taken the photo of a miniature bite of the cheese when you could get a mouthfull. Unfortunately I did not have my tripod ready, it was in the cellar and I do not bother with them – too much messing around although the photo quality is better I know. Nice sharp edges. I am more for point and shoot and this photo is the result. It got a bit shaky at the edges, but I am a golden oldie and 70 years is not longer a good age for being still and exact, you tend to shake now and again.

Of course a nice full moon with all the craters and whatever would be perfect, but you will have to do with this. 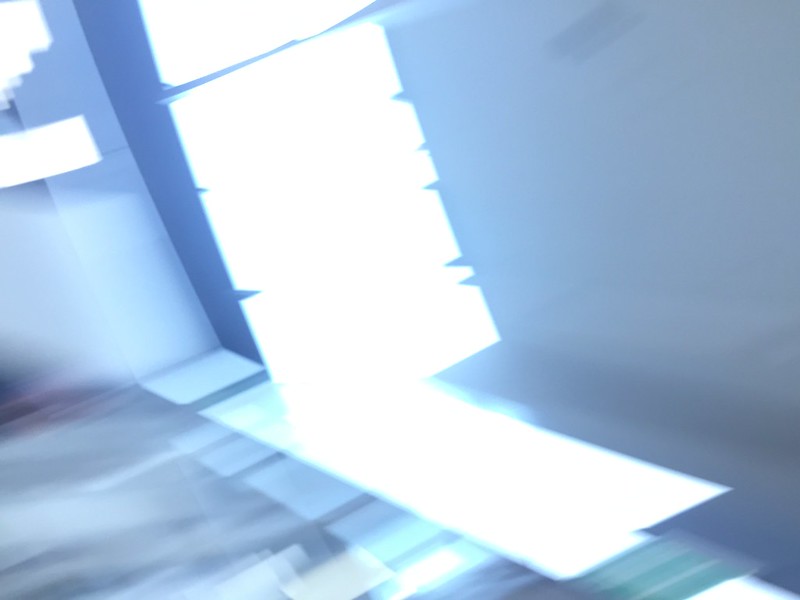 There are some things that happen in life for no reason and we will never really discover why. We were shopping today and as we were leaving the supermarket I made my usual visit to the flower department near the exit to take a few photos. Amongst the colourful chrysanthemum photos and a couple of weird plant mixtures, with some unknown triffid species I discovered this photo when I was uploading which I could not identify.

At first I was attempted to discard this photo as not being worthy of a place in my collection, but the mysterious shapes and shadows distracted me. Had my mobile phone camera being infiltrated by another power? Had they arrived, were they now here? It could have been one of my famous cloud photos, colouring of white and blue would suit the theme, It was a misty morning and there were no clouds, just a plain dark grey sky.

The white shape with the curbed edges was very suspicious. I am convinced that my telephone is now posssessed, another reason to buy a new one. These smartphones are more than smart, they are taking over. This photo seems to transpire into four dimensions with an uncanny depth. It was when my telephone began to quack that I was shaken back to reality.

Mr. Swiss was calling me, as he had lost me again and wanted to know if I could meet him at the car park as he had been waiting for some time, was I taking photos again. I was glad to hear a familiar voice and not just white noise with an echo of “Take me to your leader”. He always asks silly questions, no patience.  A telephone that quacks like a duck sounded familiar. It was my new ring tone. Of course I was carrying this strange reproduction on my phone at the time and did not realise it. I only discovered this apparition when I got home to process my photos.

My telephone is now laying on my desk, now and again it shivers, but that is because I have switched off the sound signal and it only vibrates to tell me that someone somewhere wants to tell me something.

But this strange photo is still bothering me.  I had a dream after lunch during my golden oldie sleep. My mobile phone was ringing. I reached to my bedside table to take the call, and suddenly my telephone had walked into my hand, it had grown two legs and was smiling at me from the screen. It was now invading my dreams, stealing my identity. 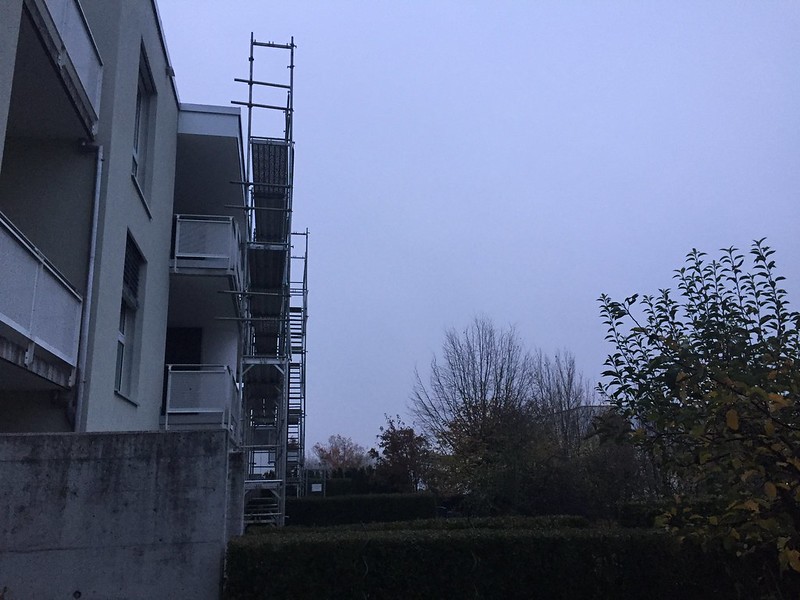 Unbelievable, but this is the remains of our scaffolding. The rest has been removed, gone, disappeared. This morning I walked outside and found myself bending to get under the platform we had over our heads for 7 months. Man is a creature of habit and we could be compared with Pavlov’s dogs, but not in connection with food, in connection with having to adjust. 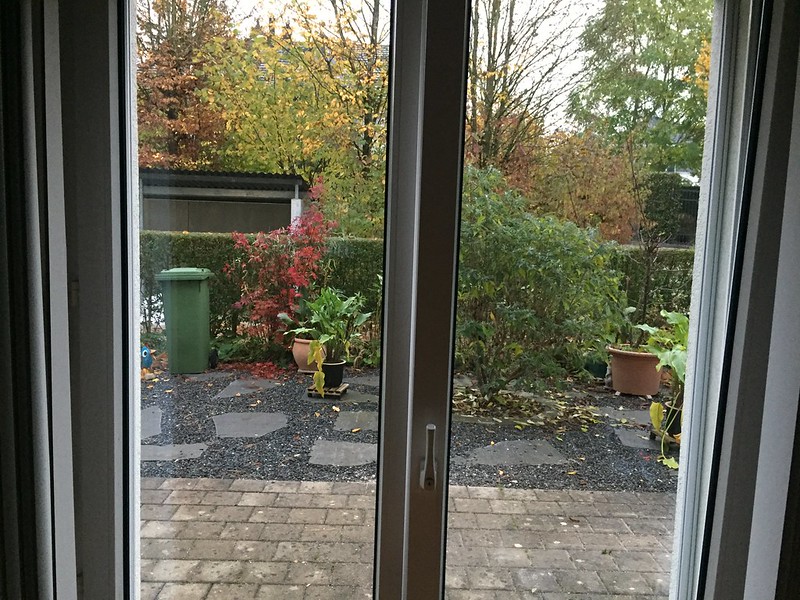 But look at our front garden, no stupid staircase to the top of the scaffolding in front of the window and above all the permanent red and yellow net decoration and door to the top. We still have a trench in front of the window, quite deep, but we can now step over it to the other side. Actually Mr. Swiss can, but I am too unsteady on my pins (legs – cockney). We are the first block to be completely freed from the building curse, but the others follow today. Actually we are gloating a little. Up to now we were always the last looked at from a building perspective, but this time we are the first to be released. I know it is childish, but you have to make hay when the sun shines and we enjoy every moment of it. 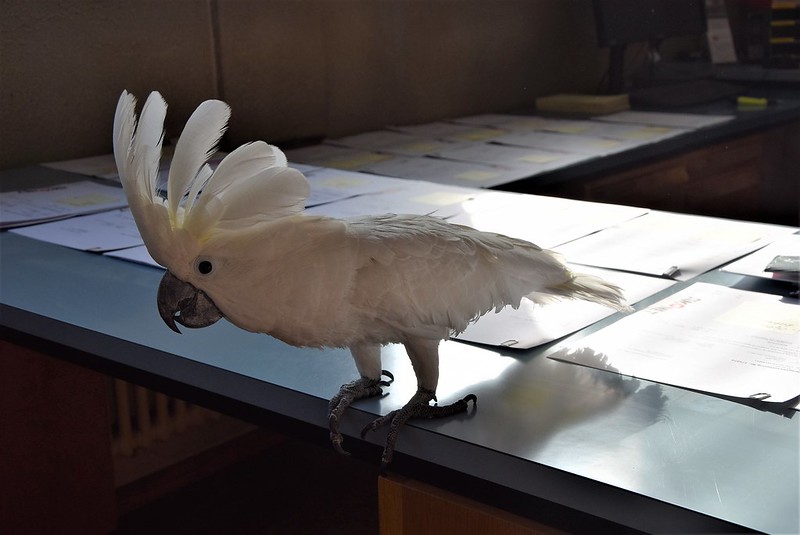 Yesterday we made a visit to an old friend of ours, Otto, known as Öttu in the local dialect. We visited my son’s boss to have a general talk about his work etc., him being autist, and were very pleased to hear how things were going. The main attraction for me is to meet the boss’s pet cockadoo again. There are not many chiefs that take their bird to work every day and walk around with him all the time. This bird is almost human, I am sure. It was a nice day and we met the boss outside with his cockadoo on the shoulder. The bird took a flight to the nearest tree, but no worry, it was soon back again. For a while we were talking together and Otto was left on his own, but this did not suit him and he showed his annoyance with his loud cries.

This bird is uncanny, almost human. As we were talking it climbed into a garbage basket or it perched on it’s human’s shoulders. Otto is now about 30-40 years old, so probably a youngster in the terms of cockadoo life. 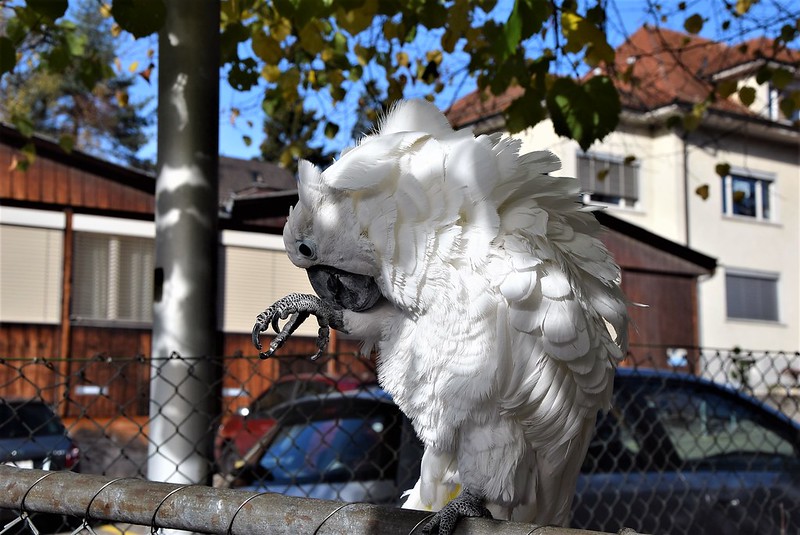 Here he is sitting outside having a preening session in the sun. I am sure there are not many companies where the owner walks around with a bird on his shoulder. When we were outside he was quite loud now and again, and you had the feeling your were in the jungle instead of an urban street. A passer by looked with astonishment when he heard Otto’s calls.

Today we are expecting the sun blinds to arrive, the colourful one with a green pattern. I was wondering how they would place them on the top floors as there is no scaffolding to climb up although why should I bother. We are ground floor, so no problem. After the blinds are fixed, all that we need is the tiles to be replaced and the new window steps to be finished and we are almost there. The gardener should also tidy a few things up, although there is not very much he can do now that Winter is approaching.

Today we are off to the supermaket to get some food goodies. Yes life is one big adventure in the wilds of Switzerland where the hedgehogs and bats say goodnight to each other. Have a good day, and have fun. 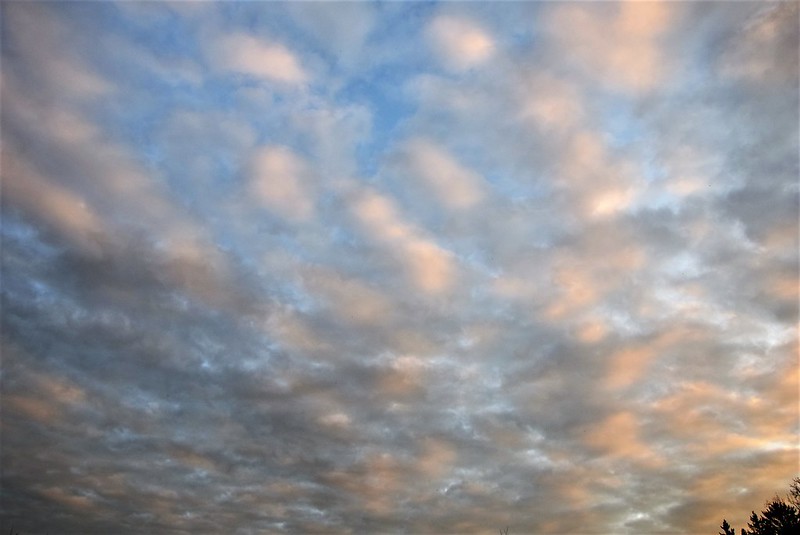