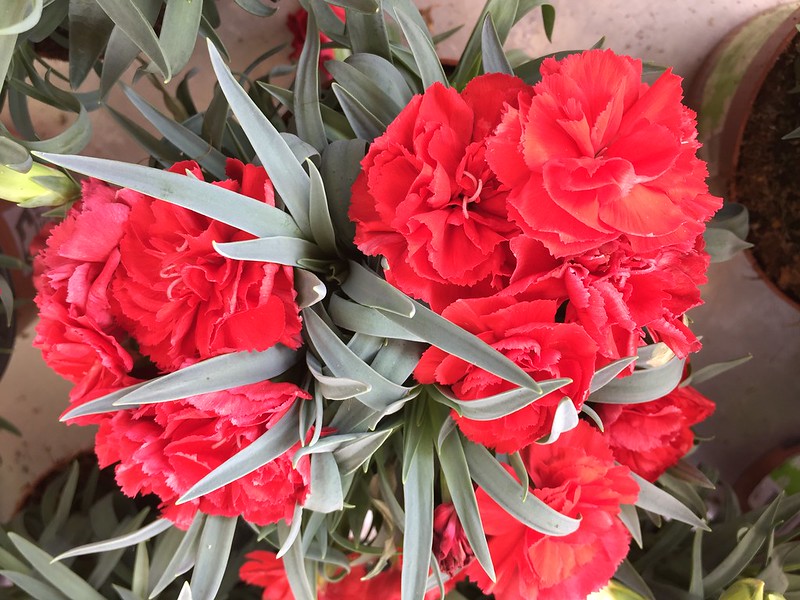 Carnations are for me wedding flowers. My mum had them in her bouquet and so did my aunts when they got married, but usually white or yellow. 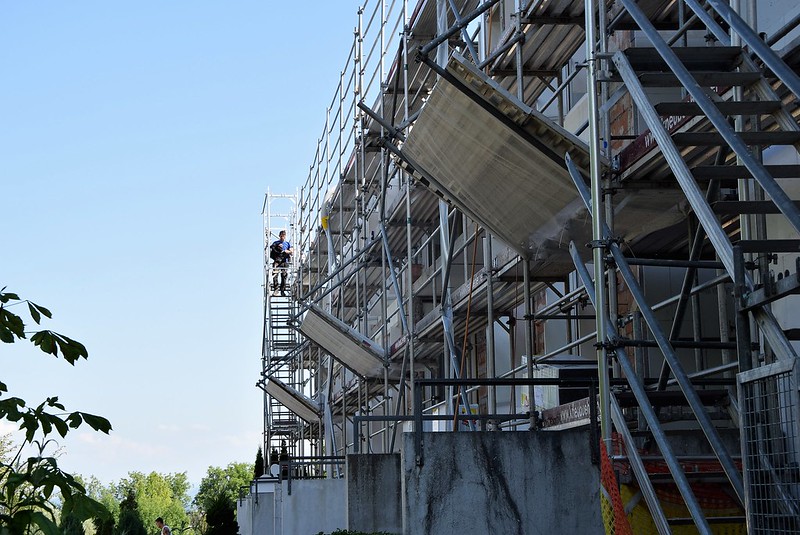 One lonely man leaves his work place on the building site. I watched the men build the scaffolding that encased the complete block almost 7 months ago and in two weeks it will all be dismantled as if it was never there. 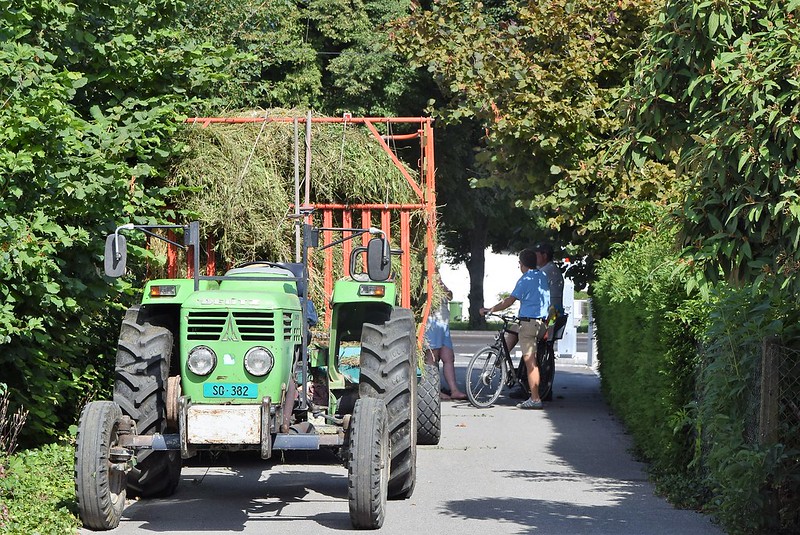 We do not exactly get invited to take a hay ride. Swiss cowboys drive tractors and do not ride horses, neither do they load up the wagon with bales of hay and or invite all the villagers to an accompanying square dance. Mr. Flury arrives with the tractor and wagon and scoops up all the cut grass from our wild meadow. I assume it is deposited in a place where it can nicely dry for cow food in the following Winter. He parked his wagon on our path as I was going for a walk, so I took the opportunity for a few photos. 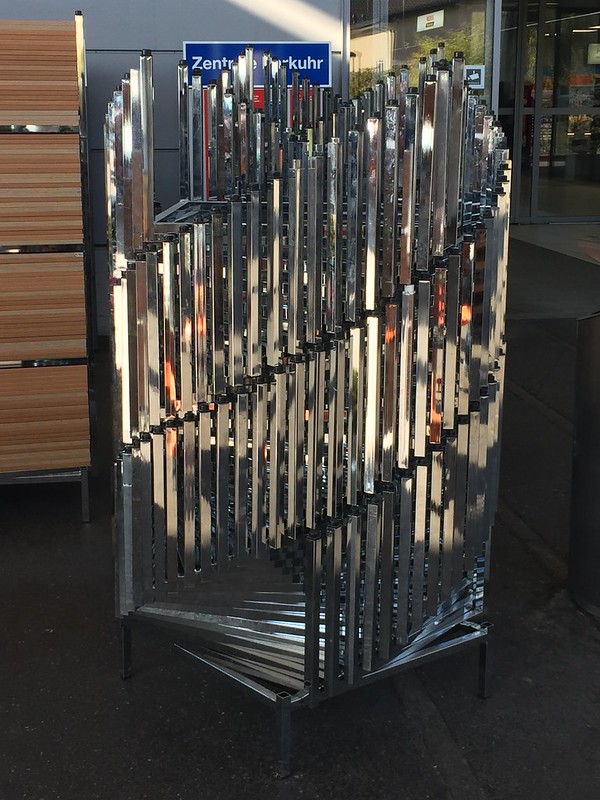 I took an exceptional photo at the entrance to the supermarket today and am still not sure what it is. It has a touch of Swiss impressionism, although I afterwards discovered that I was looking at it upside down and they were piled metal supports for the contents of a new tent. The Christmas tent is already being constructed. This is not an exception, Christmas arrives every year a month earlier. Eventually the year will be completely Christmas.

Today they let me out to visit the supermarket. Not really an exception as I visit the supermarket on Monday, Wednesday and Friday. If I had gone to the supermarket on Tuesday it would have been an exception, but Tuesday is reserved for the golden oldies and I prefer to avoid them. They form queues in the elecronics department buying their new computers and iPads. They take their time choosing what they want and ask many confusing questions for the sales people. Afterwards they swarm into the food section.

That is why I prefer to do my shopping in a relaxed atmosphere on any other day except for Tuesday. It can be such a nuiscance, they are everywhere blocking the paths and causing problems with their walking sticks. I almost had a fight with a golden oldie and that can be very risky, especially if they practice with their walking stick at home..  There was I armed with my walking stick and another golden oldie with her walking stick both attacking the same last paket of sausages. It was a fight to the bitter end, but I let her win. My walking stick was a special execution and I wanted to protect it from scratches and marks on the varnished surface. I also noticed my opponent was fitter than I was and could apply her stick right and left. I am only a beginner, just 2 years practice. Perhaps with time I will also be able to apply both hands.

I was thinking today, as an exception, I would do something completely different, but decided it would be too much excitement and so here I am again wondering what to write as an exception.

Mr. Swiss has returned to the Facebook fold. He was absent for almost a year. He is now bombarded with requests to be his friend, I am getting jealous. I told him before he left the messenger will be out of bounds, which is the main reason why he has returned. I even gave him a like on his photo, as the only one.

The moral to this blog? There is none, I was just filling in time as an exeption. 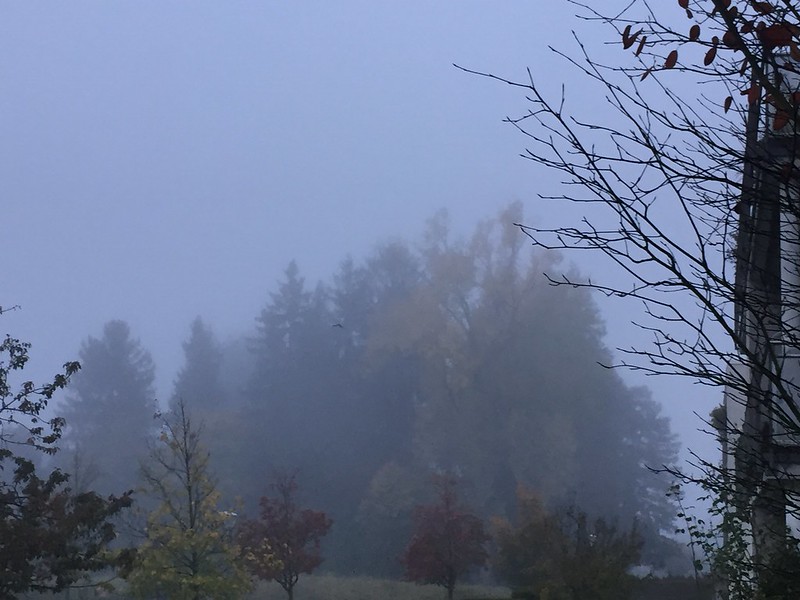 One of those damp mornings, but the autumn trees are poking through the mist. There is even a crow winging its way in the middle of the photo. For normal humans it would be quite cold, but I survive quite well without wrapping myself up – I have my own internal central heating system it seems. My No. 1 son now has a different timetable meaning we eat half an hour earlier at lunchtime. I have discovered this is quite good. I used to sit around after eating for half an hour drinking tea and munching chocolate. I decided to cut this half an hour out and so I get my normal midday sleep. Another advantage is that I have half an hour more in the morning to cook lunch and no stress and to fit in a few odd jobs that I wanted to do for some time.

Yesterday I actually repotted last year’s amaryllis. Usually I bought one at the end of the year, let it flower for Christmas and when it was finished it disappeared. I was reading up on it and decided to let it reflower again. I had it outside during Summer after I had cut the flowered stalks, where it produced many leaves which eventually died down so I cut them away. I had been giving it fertiliser regularly during the Summer according to the instructions. I removed it from the pot yesterday and discovered that I had a mega large bulb with many roots. I removed the roots and replanted it in a new pot. It is now sitting outside sheletered. I will keep it cool and after a while I will begin to give it water and hope for the best. At the same time I will probably buy another one just to be sure that something will flower for Christmas. I do not even do  Christmas, but it brings some colour into the home in the dark Winter Days. 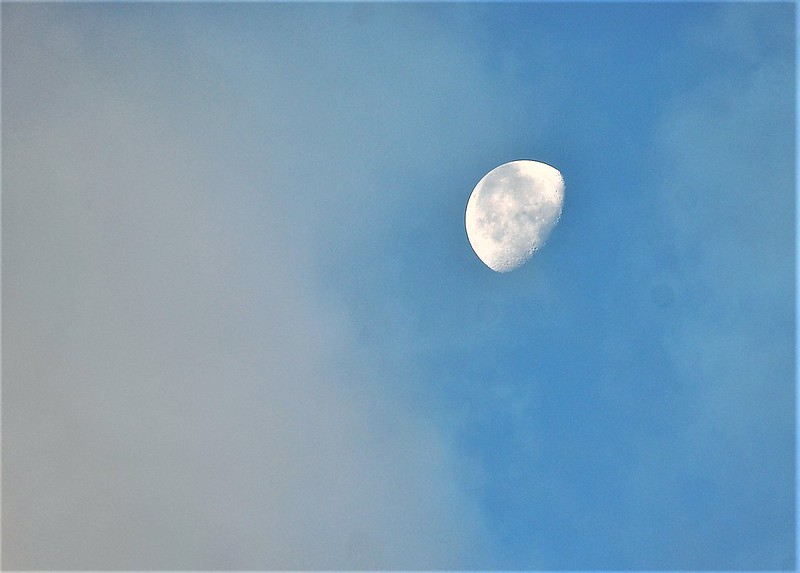 Yesterday I was delayed with my good morning blog due to the moon. I was chasing it with my camera and eventually got a couple of shots with the zoom lens. I was particularly chuffed when I uploaded them, as for many years I have been trying to get a moon with craters and a few small details and this time I got half way there. Perhaps it was the sun reflecting the ups and downs on the surface. This must be followed, and I hope to capture a full moon one day and a guy waving to me from above. 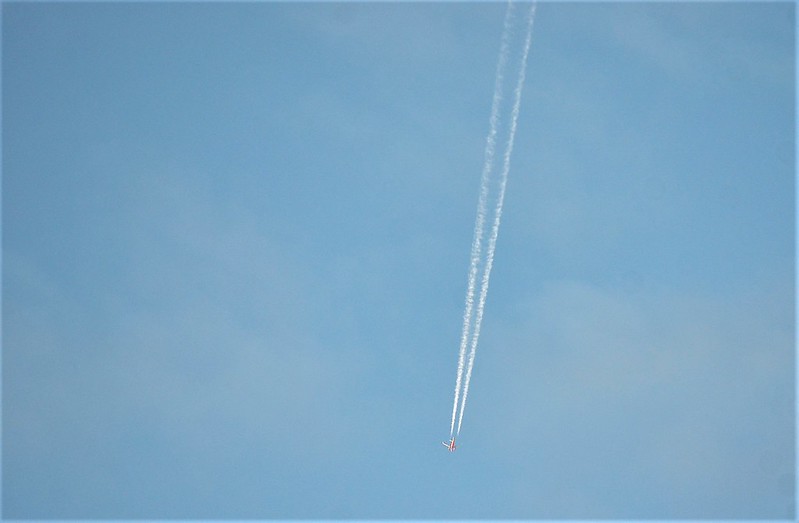 Whilst I was getting a stiff neck looking upwards a plane flew over, no not this one, a bigger one with all the details, but before I could focus the camera it had already disappeared. A couple of minutes later, as if to compensate, another plane appeared. This was not such a low flyer, but I managed to get a shot in. This one was flying Westwards. Perhaps it was only aiming for Geneva Airport, but I managed to get its red colouring – could have been a Swiss plane.

Eventually after all this sky excitement, I did get around to cleaning the place up and cooking lunch. Today I plan to rake some leaves out of my garden as my extra in between job.  They are small leaves and nice and dry, so it is not such a big job. Since I realise that the days are counted for the disappearance of the builders, I am finding inspiration once again.

It is a shopping day today but I have no idea what to buy.  Monday was a potato day, yesterday was a rice day and tomorrow is a spaghetti day, so I have no idea  what today is. It would have been a rösti day, but my electric rösti cutting machine blew a fuse a couple of weeks ago and I am not in the mood for doing it all by hand, especially as the grater sometimes includes my fingers in the grating sessions. No-one likes red stains in the potatoes.

So let us get on with it, the computers and us. Mr. Swiss said something about a mega update this morning in the windows world which took almost half an hour. I have nothing on my machine – yet – but who knows. Perhaps it will not say good bye when I close it down, and add an extra. 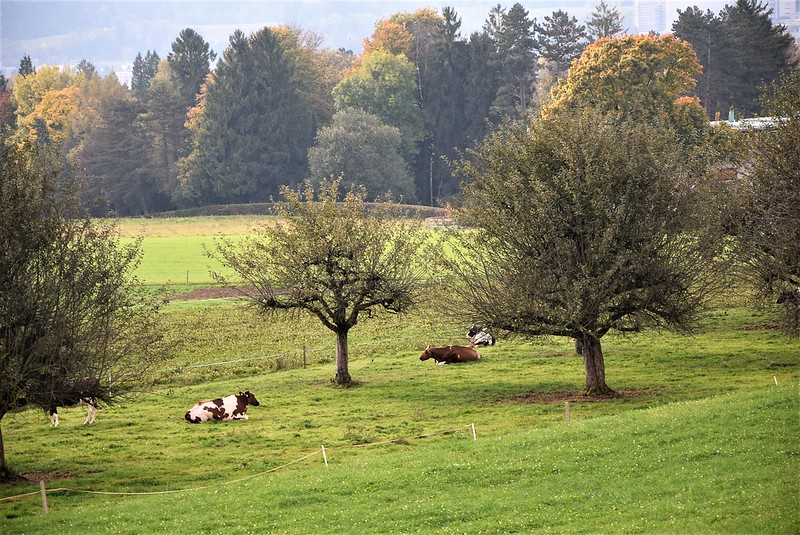