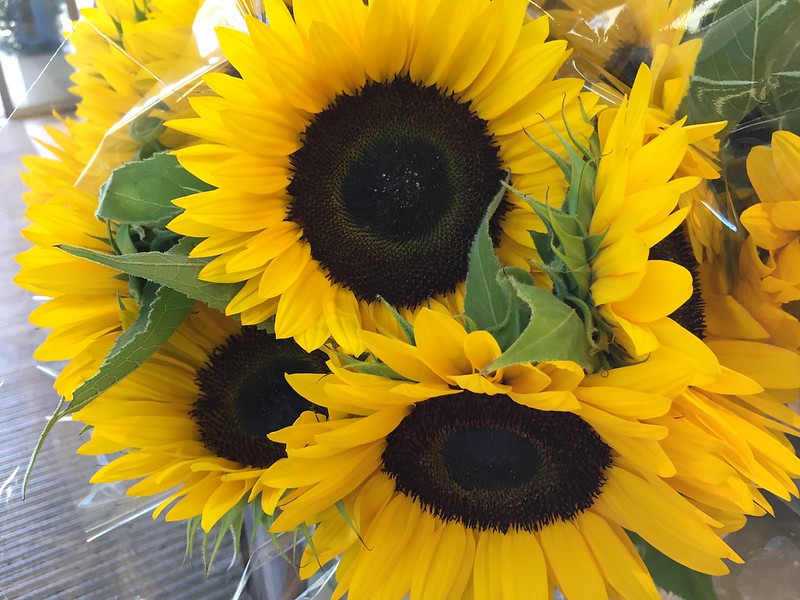 Bringing a little sunshine into a dreary Autumn Day 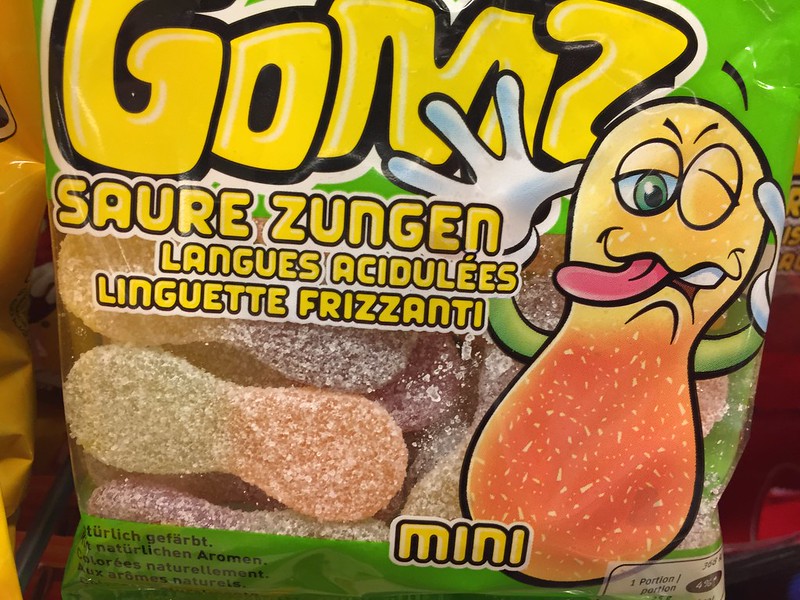 In Switzerland we do not celebrate halloween, although now and again there might be a ball organised by a few private people. Everyone is a vampire at heart. The stores once tried to introduce it with candy, halloween ornaments etc. but they were mostly left on the shelves. There was no interest. So I had to go searching today for some candy: nothing spooky, but some sour tongues.

And here are some sour glow worms. 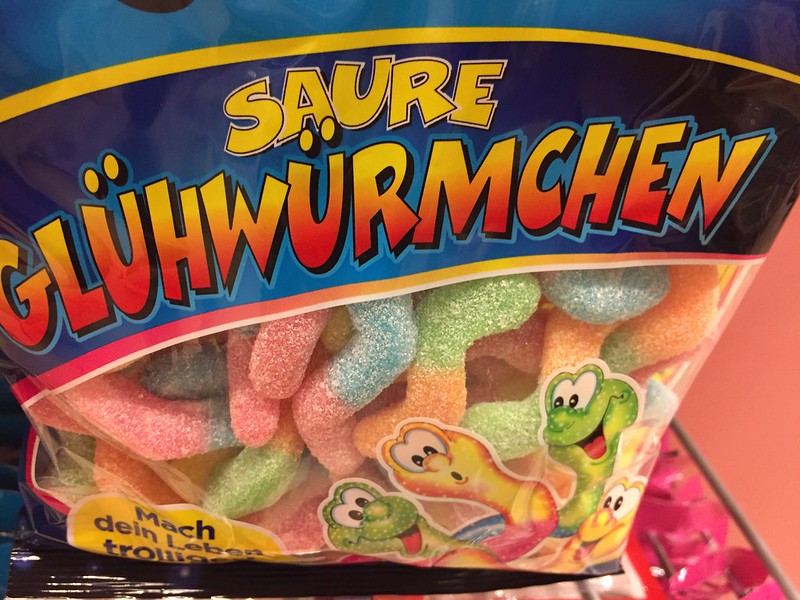 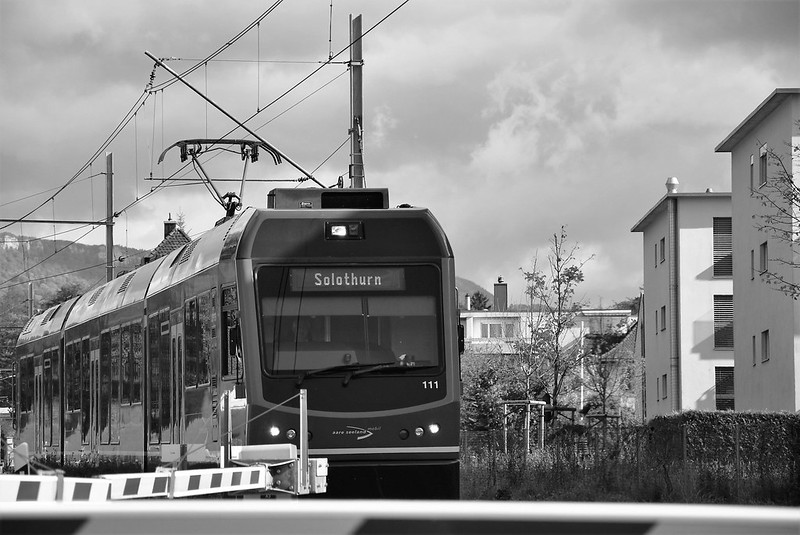 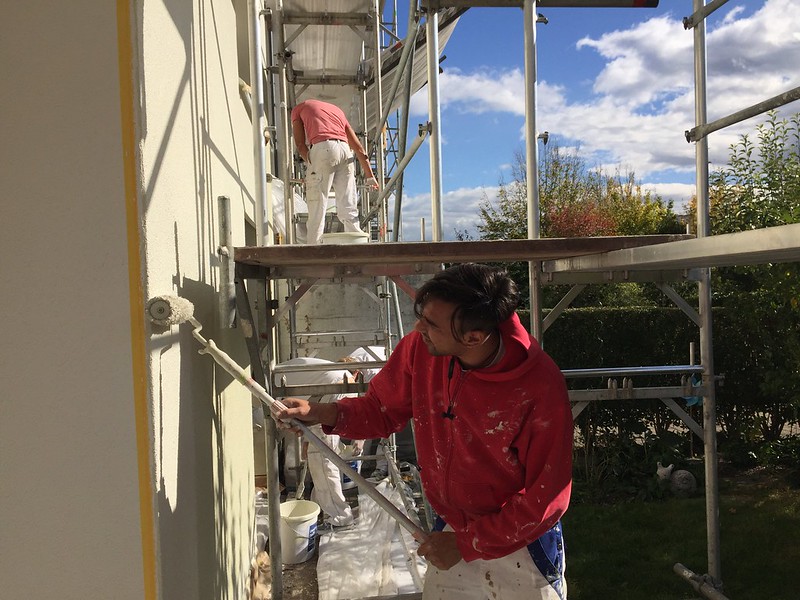 It is Friday and our local builders are preparing for the week-end. It is the time when they have to get the weekly  tasks completed. Since Monday they have been designing and planning to paint a wall. The idea is that at the week-end they are gone, and we can watch the paint drying.

After my golden oldie sleep I awoke to discover four painters coating our outside wall with their paint rollers in harmony with each other. It was pure concentration, a genius has to concentrate. There was an interruption when one of the painters above was dripping paint onto his colleagues head below, combined with profanities, but they all continued regardless. It resembles the painting of the celing of the Sistine Chapel. The work must be completed.

I took a few photos to mark the occasion and moved on to the other side of the appartment. Here I discovered another genius at work with parcels of blinds to fit on the window. This is the result of perfect co-ordination. Mr. Swiss decided to take a “walk around the block”, which he often does – out of boredom? No, he is inspecting the work progress. He returned to report that at the end of the next week the Picassos of our building will be leaving. I forgot to tell them to sign their work before they go. The blinds will also be completed and there will only be the finshing touches. 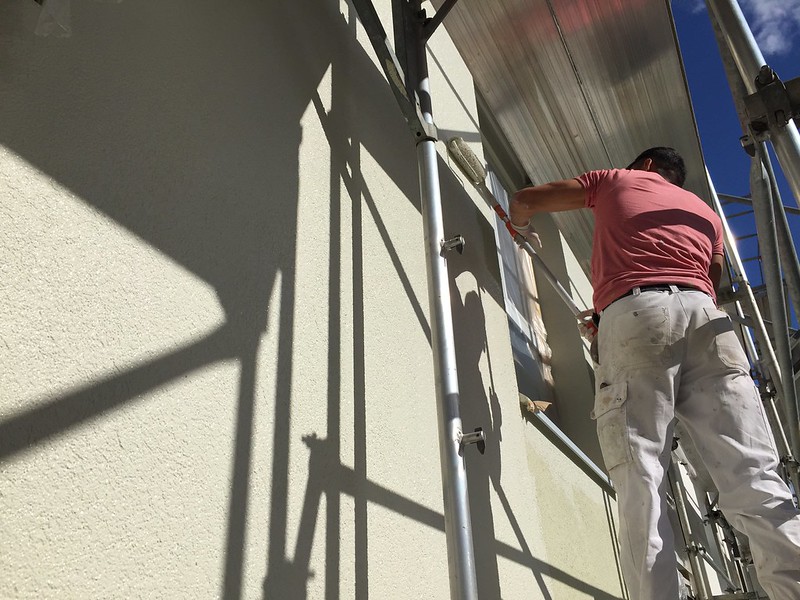 Everything now has a hint of green on the surface. I have never seen so many painters together painting a wall.  Perhaps they are competing for the Pulitzer Price in Wall painting.

In the meanwhile I have yet been subjected to my annual insult. The Nobel prizes have now been distributed. Yet another disappointment. The literature prize is always the last one to be given and did I win? My great work of blog again went unnoticed. There was no telephone call from Sweden that I would be required for the prize presentation.

I sit at my computer daily constantly completing daily prompts, but no-one notices. I have been ignored again. My only hope is the Pulitzer prize for my wonderful original photos to illustrate my prompts. My photographic tours of the surroundings covering everything from cows to ducks and trucks on the roads. I have a collection of cranes not to mention my clouds and all is ignored. What am I doing wrong, why does my genius escape recognition? They are all scumbags (excuse the expression), wannabe artists that have absolute no talent in comparison to mine.

There are many that deserve recognition for their talents and they are rewarded from the international juries. I congratulate all the winners and am really not jealous because they deserve their awarded prize. However, there are always those that leave with empty hands, with an empty place of honour reserved on their bedside table for that certain medal. I have a wonderful space on my living room wall where a certificate would fit, and it has been empty for many years. I hope they spell my name correctly when the certificate is finally established 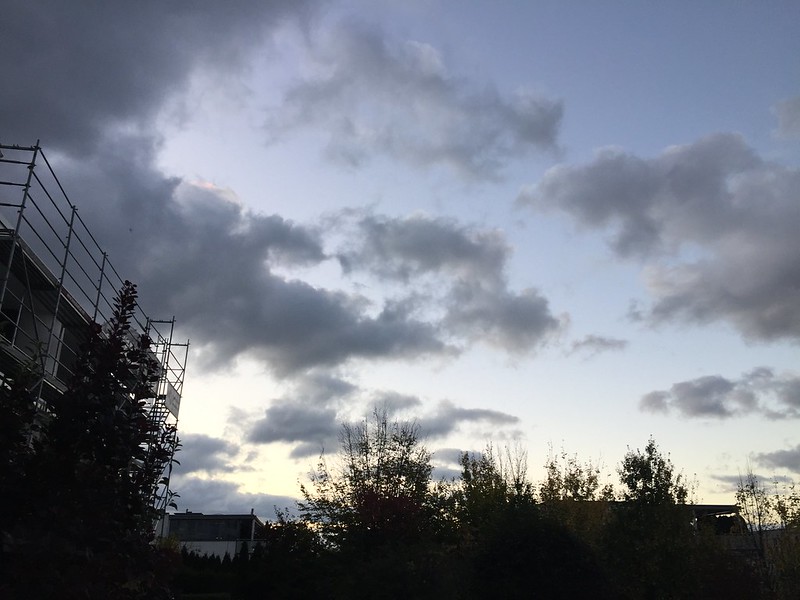 A dramatic sky this morning, but there is a sun somewhere trying to get through. We are now into the autumn weather and no longer so much warmth, although the sun is shining. The trees are now confused. 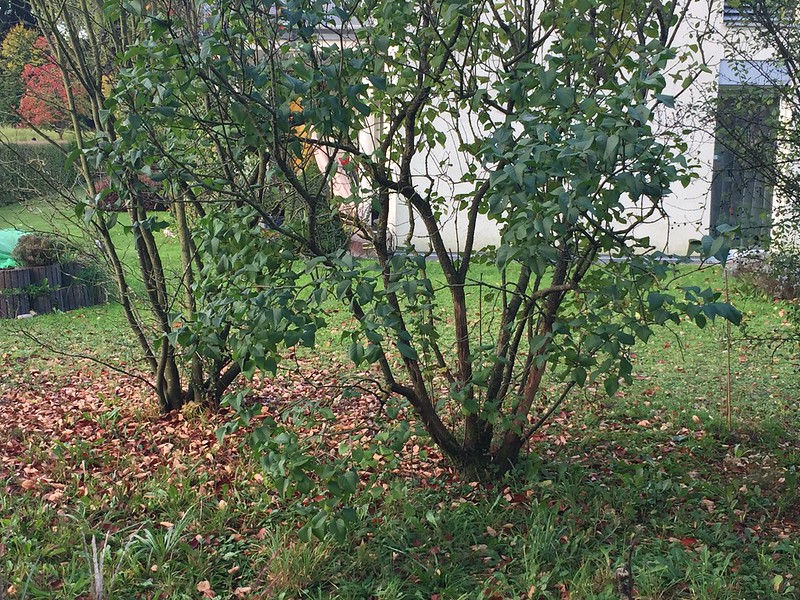 Instead of showing their wonderful changing coats of colours from green to russet and brown, they are just dropping their leaves, as if they are making up for lost time. The remaining green leaves on the trees are surrounded by the dry brown leaves on the ground.

Yesterday there was a European windstorm in Germany in the Berlin area, causing a lot of damage and casualties with 5-6 deaths. Here is Switzerland everything remained within limits, although yesterday evening I heard the wind whistling through the windows and it was a rougher night than usual, with rainfall.

This morning I was still hugging the bed and multi tasking with my iPad. Suddenly I had to scratch on my elbow. Ok, no big deal, but when suddenly a small flying insect making noise like a mini motor bike whizzes past, then you know you are under attack. Yes, it is mosquito time again in Switzerland, especially if a river runs through it, and our river is just along the path. Of course those little insects need fresh warm blood to incubate their unborn babies, but not mine. I was soon scratching an irritation on one of my fingers, and decided to go into attack. Mr. Swiss was already active in the home, and he came to my rescue with an anti mosquito instrument that you fill with some sort of liquid and plug into the electric socket. I have no idea what the liquid is, do not care, but the mosquitos then stampede out of the door. I was still scratching when I stopped hugging the bed. 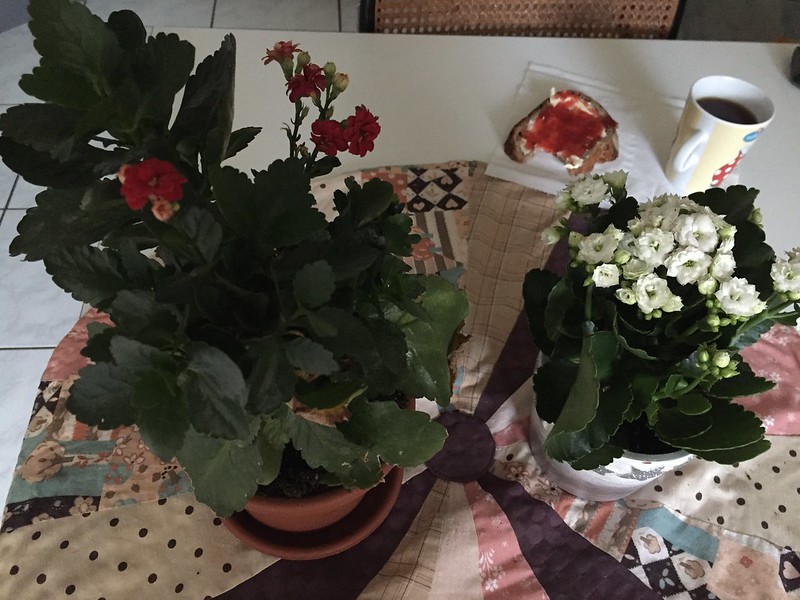 I am now alone with my breakfast and my two kalanchoe plants in the kitchen. Mr. Swiss had to go places, but will be back in time for the Friday excursion to the supermarket. I love those kalanchoe, they are the happiest plants I have ever had. I bought the one on the left in Spring and it is still flowering, so I decided to get a second one. They only need water once a week and when the flowers die, just cut the stalk and a new one grows. Another big plus point is that they must be the cheapest potted plants the store has.

I have now finished my Stephen King book Dr. Sleep. It was written as a sequel to The Shining many years later. Apparently people were bothering King for a follow up and he eventually wrote it. When it was published it even won the Bram Stoker award 2013 for the best novel. I can highly recommend it, but would advise to read The Shining first. Seeing the film does not automatically connect you to the new book, as in most films, everything is different to the original book. The little boy Danny Torrence in The Shining is now 40 years old in Dr. Sleep but still has his shining gifts.

And now to my next book, Origin by Dan Brown. It was only published a couple of days ago, so no danger of films that are different to the book.

And now to move on, life  is so exciting when you are retired and a golden oldie. There are always things to do and places to see, like the supermarket. Our week-end shopping list exists on our telephone cloud, so there is no chance of forgetting anything. Mr. Swiss reminded me  that we must add a new brush and pan to the list. Of course we get the special golden oldie execution with the extra long handle, so that we can do the necessary in a standing position. We are no longer so good at bending and sweeping the crumbs together.

Keep safe, be kind to your online assets, computers, iPads etc. etc. and the week-end has almost arrived. I will soon be on my way to the super market where the trees are changing colour. I hope we do not get attacked by the falling leaves. 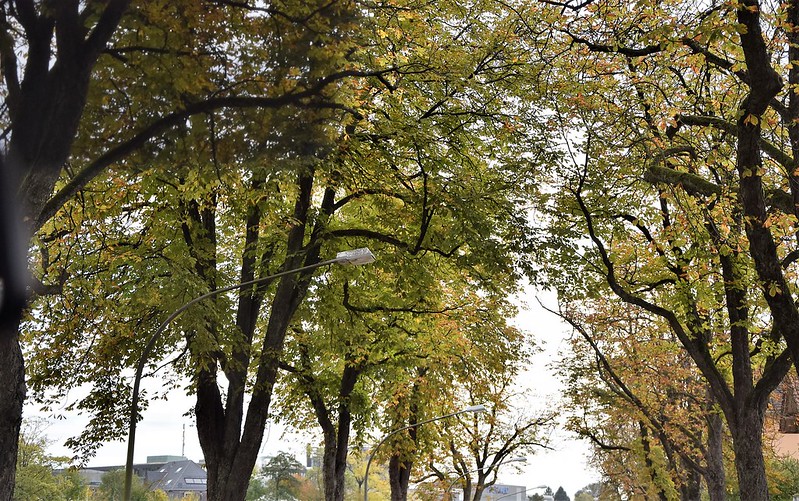