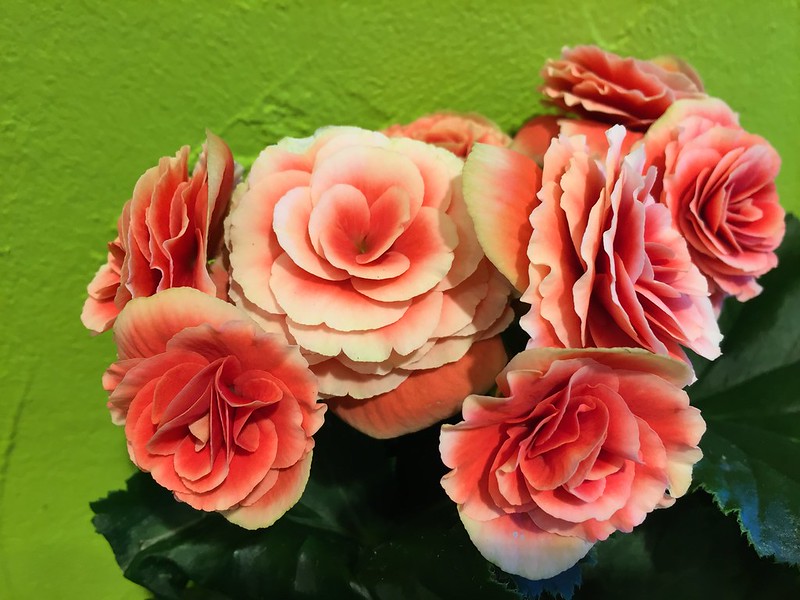 Begonias are the ideal potted plant. I took this sometime in Summer at the local store. 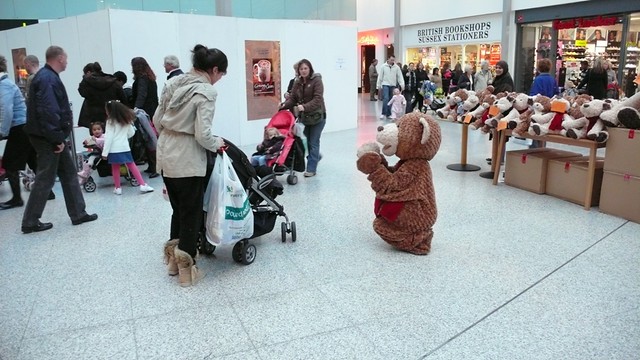 Some travel in a pram, but most are walking, and they all have a purpose. Being a pedestrian can sometimes be interesting, it depends on who you meet. The photo was taken in the Romford Shopping Center, greater London, England. 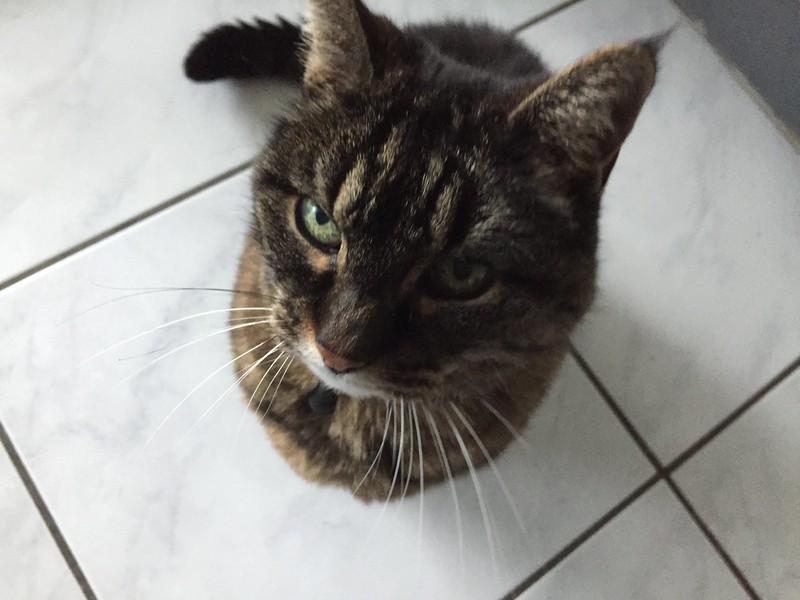 Never trust a cat, they are planning to take over the human race, especially at halloween. 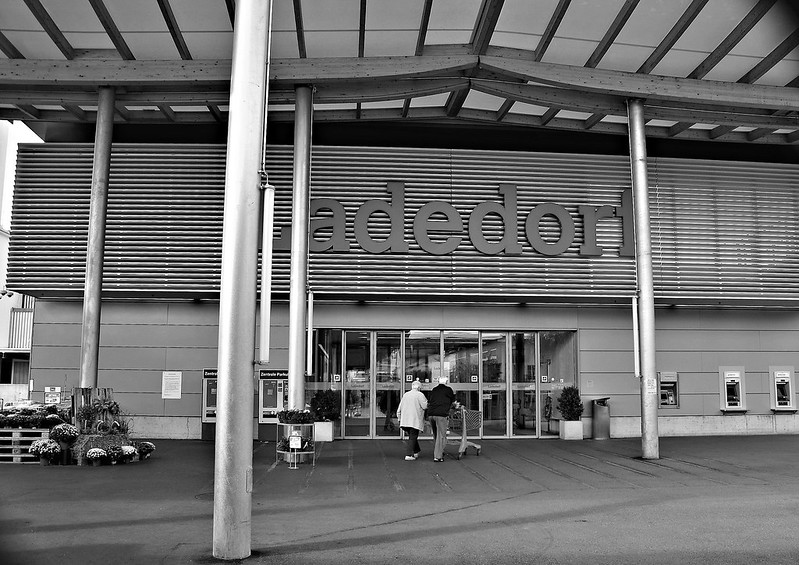 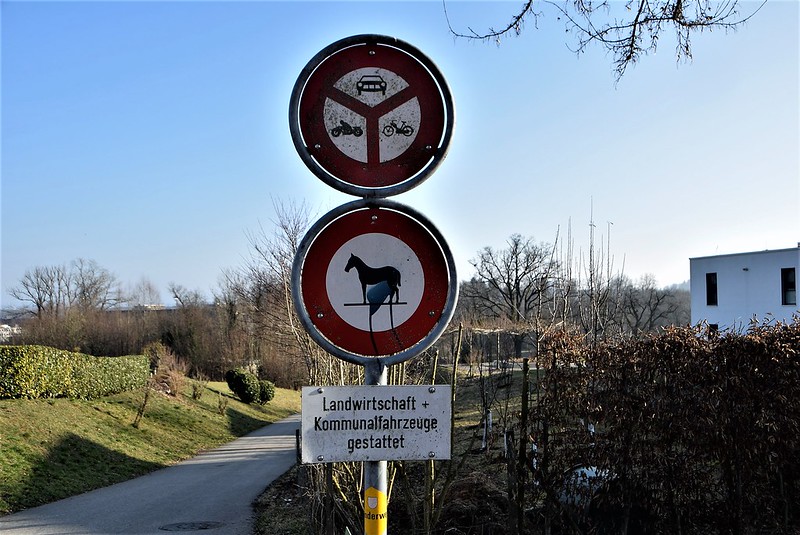 They are everywhere: those signs with the big red ring around them telling you what is forbidde. There is never a sign to tell you what is allowed, but probable there are so few things allowed it would not be worth it.

Although it is in the German languages, because where I live it is the main way to communicate, there are pictures for the foreigners, so no-one gets away with it. Before I set foot on the path I notice that if I am in a car, or perched on a motor bike or motor cycles I should forget it. And riding a horse is absolutely not allowed on this path. However there is an exception, there are always exceptions to the rules. Agricultural municipal traffic is allowed, meaning if the local government supplies you with a tractor or harvesting machine, you can use it. I was puzzled, as when you reach the end of the slope there is a narrow footpath and a river runs at the bottom. The only thing you could harvest would be a few fish, and you cannot do that with agricutural machinery. The path would be too narrow in any case. 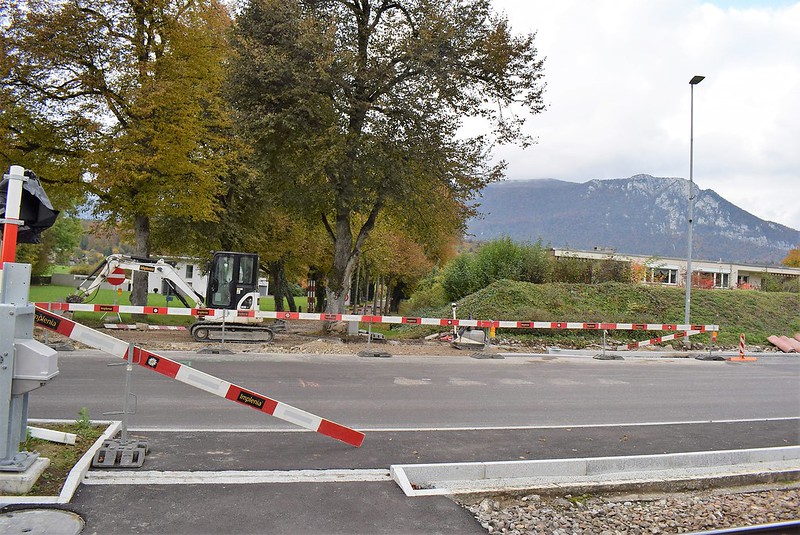 A few years ago it was decided, by the local powers that be, that the main road through our village should be repaired: not really repaired, but replaced. For a few months you had to take the scenic route over hills and dales (and hills in Switzerland are more small mountains, the dales being miniature valleys) which would add half an hour onto the journey to the local supermarket.

We were the lucky ones as our home is on the edge of the village and we had an escape route. However, taking a walk to the top part of the village was denied.  Our exit was blocked by the famous red and white wooden board and if you did walk around it and manage to cross the road there was no way to walk further as the sidewalk no longer existed. It had been removed waiting for a nice new replacement. The chickens were all relieved as they were no longer asked such silly questions about why they wanted to cross the road.

In other words if uncle Fritz and his family lived in the top half of the village you communicated by e-mail or perhaps flag signals and telephone. Now and again you would look in the family album to remind you of his physical details. Of course, all things come to pass, and eventually the road was opened – on one side. Those wanting to go in the opposite direction were still driving up mountain paths.

All the cows lived on the other side of the village and I missed them for my camera. One day the work was finished completely and we now have a nice new road, although all the railway crossings were now closed by barriers which open and close when the train passes through, accompanied by an acousitc “bing-bong” sound. Now everyone in the village knows when the train is approaching. 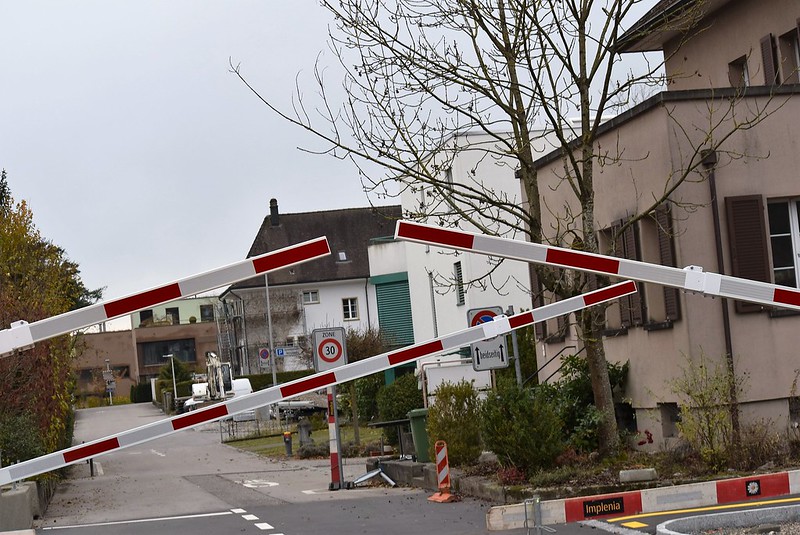 They also closed one of the main road exits and entrances to the village, finding it not really necessary. It was a good exit because it was opposite the road continuation to the top part of the village and its castle, leading to the next village where the supermarket was. Who cares, we had a new road.

This now belongs to the past, and when I tell my grandchildren one day about the time when we were cut off from the world, they will not believe me I am sure. 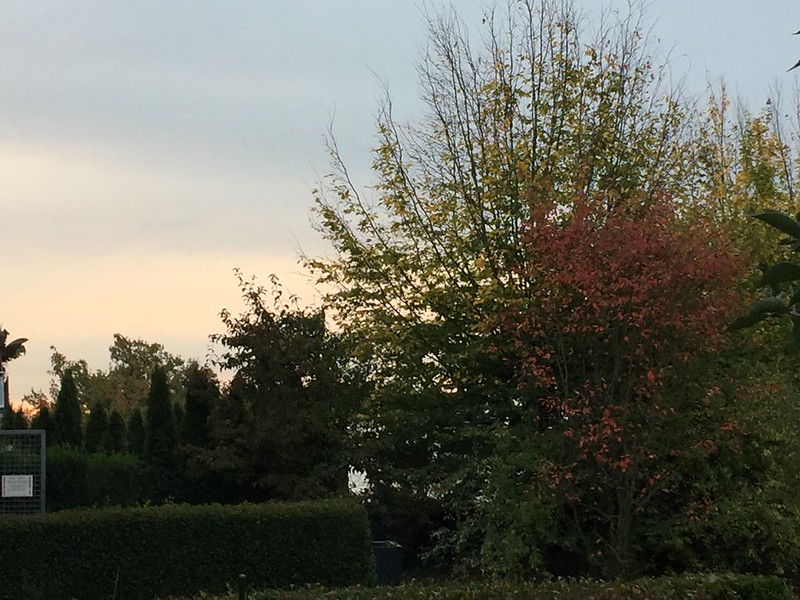 A little bit of sun and a little bit of Autumn in the tree on the right, that is today’s vision outside in the back garden. If you have micro eye-sight you would see the flock of crows somewhere on the left just above the sunlight, but unfortunately my iPhone 6 is not equipped with the super camera that the iPhone 8 has or the iPhone X will have when it appears. I am still thinking about it. What else does a golden oldie have in her life other than her electronic apparatus. I am an “i” golden oldie it seems.

In the meanwhile, life continues. 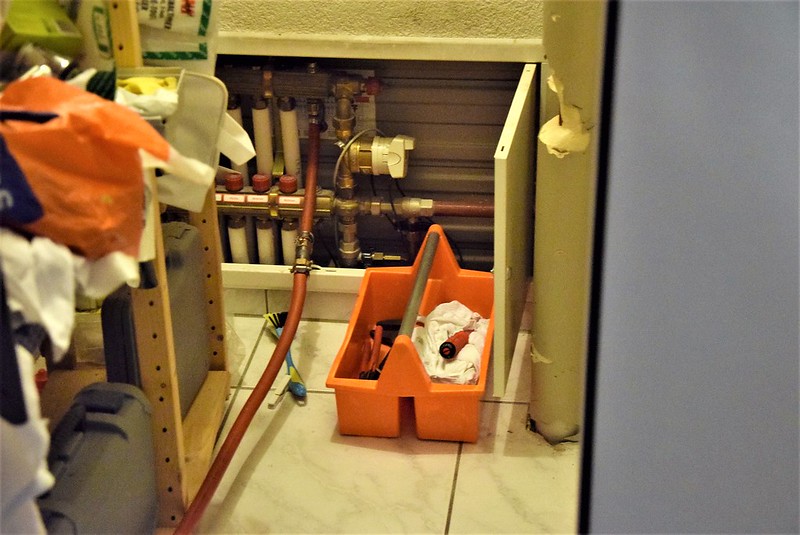 Yesterday morning we had a visit from the men that arrived to flush through our heating pipes. Our operations centre is in a small room that is known for us as a “reduit” meaning space for your cleaning gear and the laundry container. We cleared away the stuff blocking the entrance to the pipe system, but our shelf construction still had to move. They were very nice guys and did the rest, by shifting it to one side. There are eight pipes to clean and they attach a hose to the pipe and turn on the jet stream somewhere to flush it through. 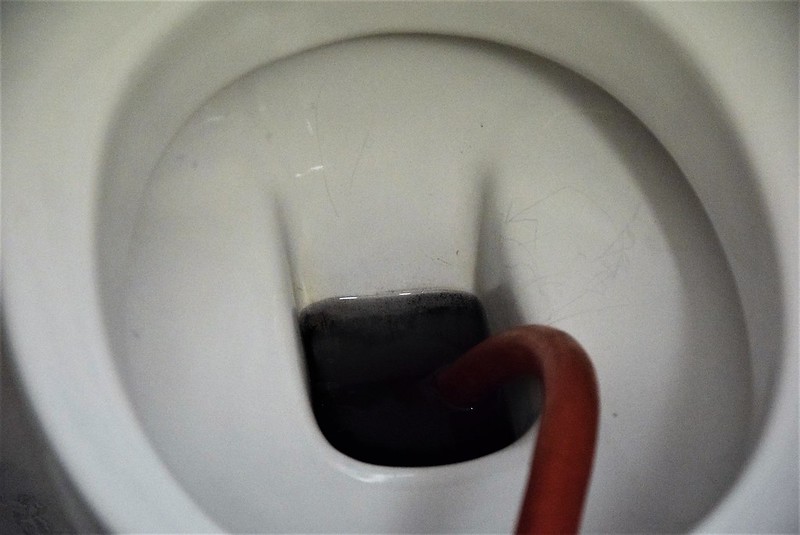 The hose is than inserted into the toilet (we have two thank goodness). This is the guest toilet so it did not get in our way. Afterwards the water jet empties into the toilet bowl. One of the neighbours found it was really not a necessary job, but we learn every day. This was necessary, when I saw the soup that arrived in the toilet bowl, although it could have perhaps waited until spring when the renovation curse with the buiders and scaffolding was not upon us. The guy said that eventually the dirt builds up in the tubes and could block the heating.

At the same time Mr. Swiss discovered that our heating central in the cellar was not working, so the guy had a look and said that one of the blowers (whatever that is) was not working and he contacted the heating company to fix it. They came and repaired and now everything is under control.

After an hour the job was done and they moved on to the next appartment. By the end of the day we all had clean heating tubes.

Yesterday Facebook informed me that the new Dan Brown novel “Origin” had been published. I had a look in my Amazon and yes, it was the first day. It was the fifth in the Robert Langdon series, the first being “The Da Vinci Code” and I realised I had read all four, so I downloaded the new book. I usually wait a couple of years until they might get a little cheaper, but the Kindle was 14,99 € for 480 pages, so I decided why not.

I also noticed some time ago that the latest Ben Aaronovich novel “The Furthest Station” had been published in the Peter Grant series, dealing with a police detective responsible for the supernatural. I was interested, but discovered that its price was even more expensive than a bestseller, as it was a novella with only 120 pages. I decided not to download it on my Kindle, that was too far over the top with the price. I also belong to a group “Lord Grant’s Irregulars” which is a sort of a fan page for Ben Aaronovich and there was a lively discussion about this price being expensive for what was being offered. I am sure the book would be interesting, featuring the London subway and strange ghosts that suddenly appear amongst the passengers, all very mysterious, but not for that price.

Today is a day of shopping so I will be going places and seeing things and trying for a few fantastic shots with my camera from the car. Mr. Swiss and I are now having a detailed conversation about what to buy and eat, but we decided to wait and see what is on offer.

In the meanwhile I will leave you with an interesting marrow/gourd/pumpkin that I saw in the supermarket. 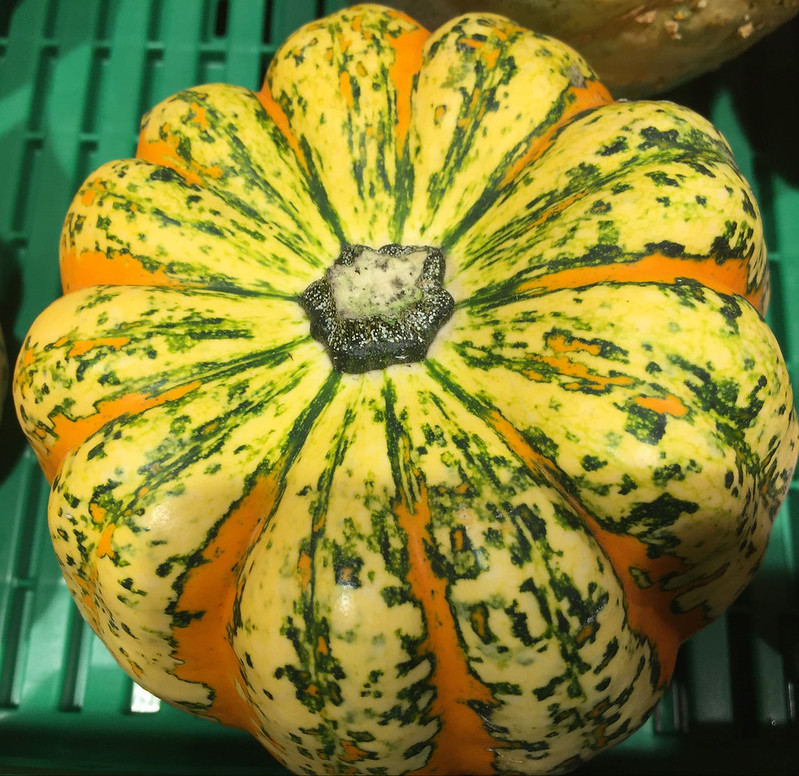