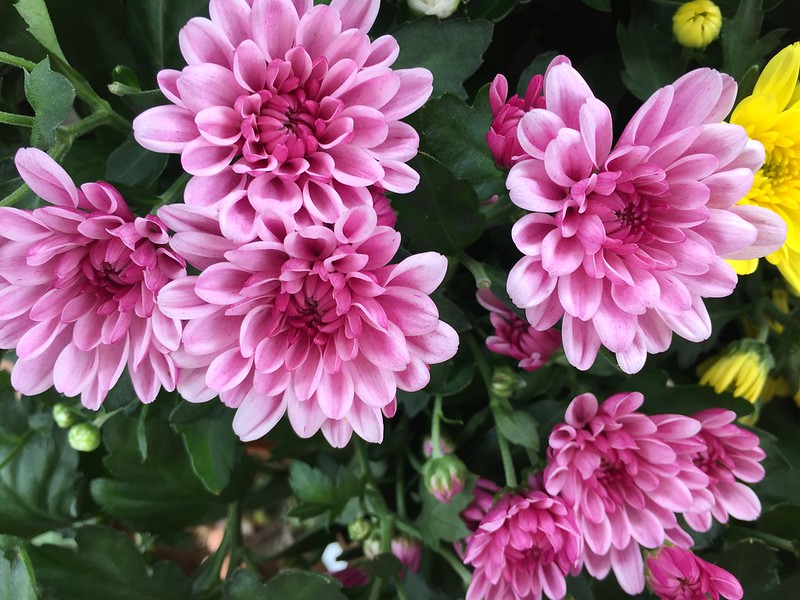 Although they could be chrysanthemum, I am never sure. I took the photo in July so probably dahlia as the mums arrive in September. 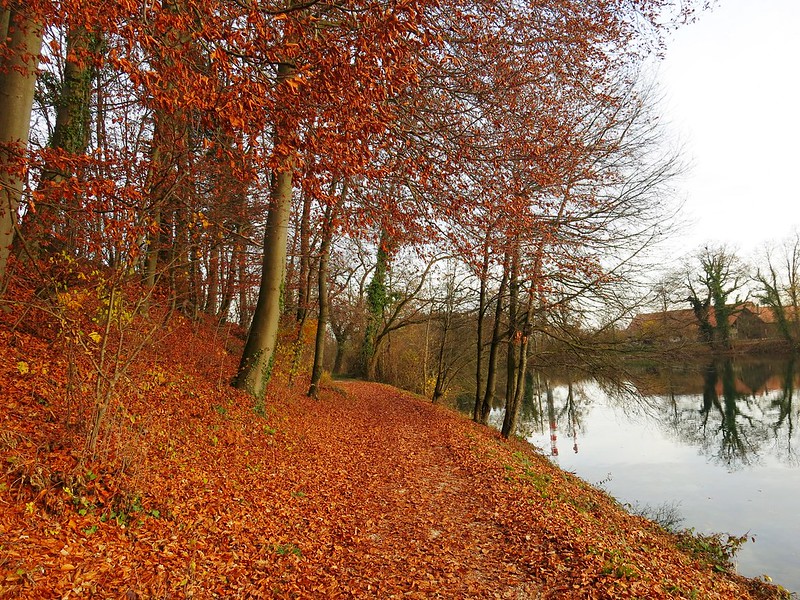 Dr. Folium was ready for another day at the hospital, although he was tired. There was one emergency after the other daily, and he hated this time of the year.

He approached the gurney and saw the battered and bruised body of a grey haired lady. They were the worst casualties, the elderly people. The had no defence against the leaf tyranny. They loved to view the Autumn colours of the trees. This lady was battered and bruised and even had a lump beginning to grow on her head.

“What happened?” he asked.

“I was taking a nice stroll in the woods, it was such lovely weather, and then it hit me.”

“What hit you exactly.”

“I think it was a leaf, even two or three. They attacked me. My arms and legs are full of bruises. Look at my head, that was from an oak tree. They are falling everywhere.”

“You should really avoid such places in Autumn, it can be very dangerous.”

“It’s true. Look, there is Joan, my neighbour. She is also looking quite battered.”

“Yes another one of our leaf casualties.”

“Attacked? It was almost an assasination. The leaves all fell at once. They surrounded me and there was no escape. Doctor is there nothing we can do?”

“I would advise just staying inside until all the leaves have fallen. Even a single leaf can cause a serious injury. ”

Dr. Folium sighed, it happened year after year. Everyone is looking forward to the Autumn, but everything has its negative aspects. Luckily the schools had been closed at the end of August, and no children had been harmed up to now. No-one left their home without their car or dressed in protective clothing. Even the cars were suffering and all bearing dents from the falling leaves.

He would have liked to have taken some photos of the Autumn colours, but his camera was being repaired after being shattered by a leaf that was charging dowwards, released from its tree. The leaves were becoming unpredictable, destroying everything in their path.

In the meanwhile his patients were discussing the advantages and disadvantages of a nice Autumn walk. In the background he could hear the sound of an electric saw as it was removing the tree in front of the hospital window. This had nothing to do with climate change, he was convinced. The trees were planning something and there was no escape. He removed his gloves and white overall and changed into his wellington boots and green apron, to do his part in the battle. He left the hospital building and entrered its garden and began to sweep the leaves together, before they rose again. 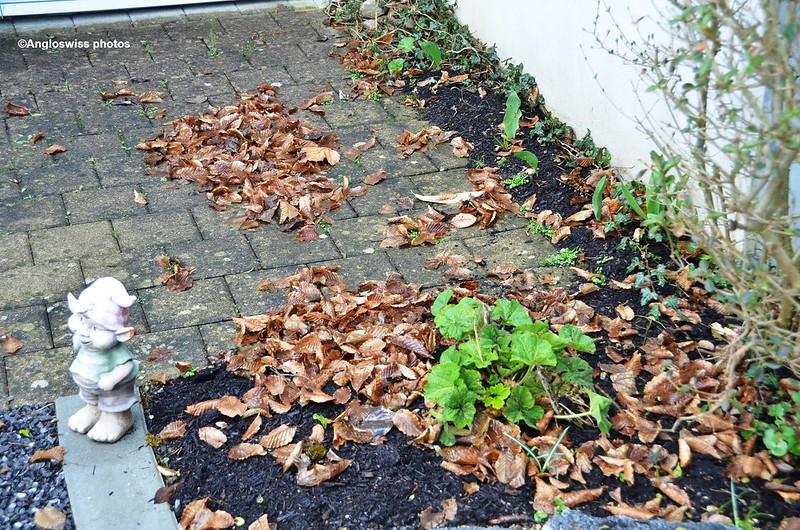 Daily Prompt: The Trouble with the Leaf 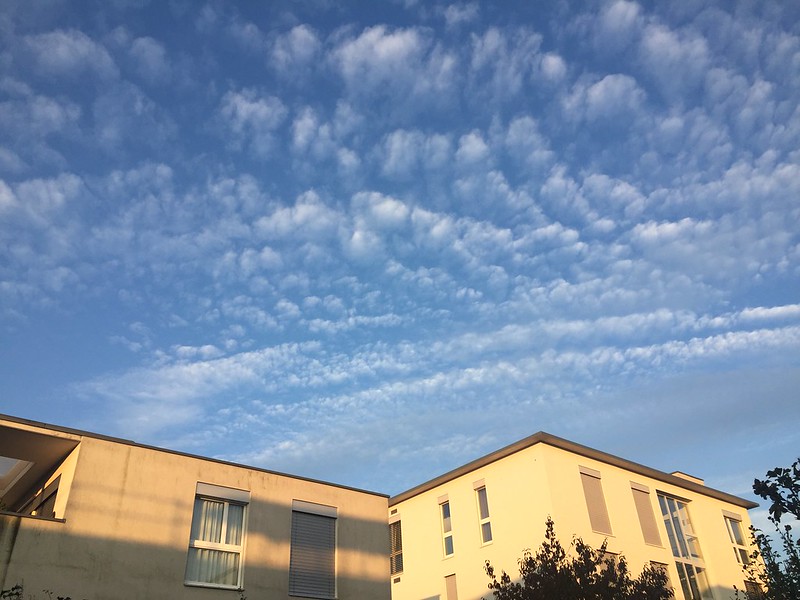 Wow, I managed to leave my bed this morning and make my way to the kitchen to prepare my frugal breakfast of two slices of bread, wholemeal, with a layer of butter and blackberry jam: nothing spectacular, the usual morning routine. After making my tea, not stirred or shaken, just left to diffuse with a tea bag, I grabbed my mobile phone and did the usual morning photos. Who knows perhaps I can use them on my blog. This morning was a difficult choice. I took three photos but decided this one was the most artistic, catching the sun’s rays on the next block with a sky of “altocumulus” clouds.

Yes, I have a new hobby, the study of clouds. It seems they all have their own name, and prompted by a co-blogger on WordPress I will be ordering my first cloud book. There is a cloud appreciation society, as I am not a member, but on their mailing list and receive a cloud photo now and again, but me being me, I want to know more. I would love to join this society based in England, but at the age of 70 and being a golden oldie I decided it would be another stone on the way to deal with, so I am just happy with my camera, a sky and clouds. 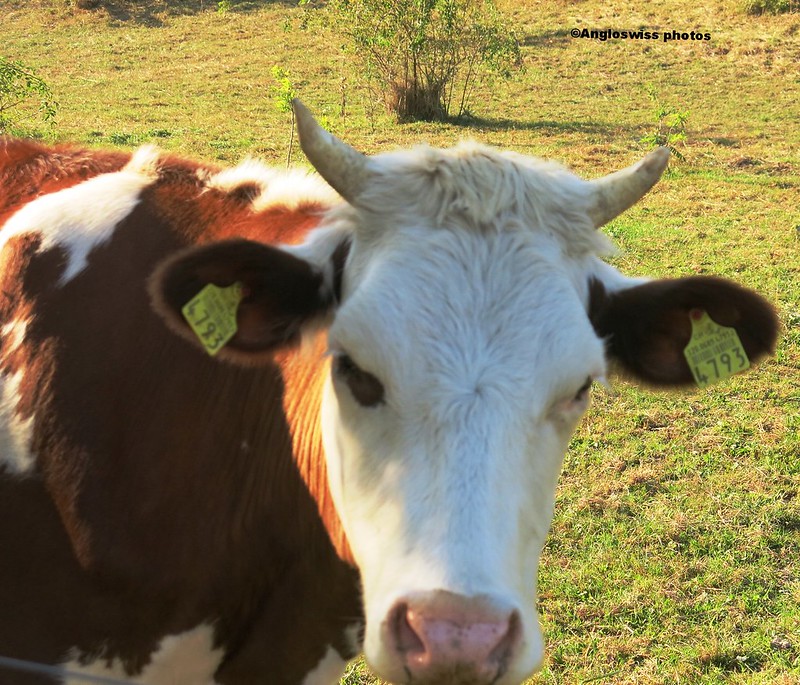 In the meanwhile there is a politial problem arising in Switzerland in connection with our population of cows. I am not an expert and was basically of the opinion that bulls have horns and cows do not. This is wrong. All cows have horns, but they do not realise it. As soon as the calf arrives on the farm it horn buds are removed.

According to Wikipedia “Horns are removed because they can pose a risk to humans, other animals and to the bearers of the horns themselves (horns are sometimes caught in fences or prevent feeding)” but no-one asked the cow.

This has now become an important point on the Swiss political agenda. We are a direct democracy and if you collect enough signatures for your wish, all on an official government approved document, you have a referendum. Yesterday a Swiss cow famer, knwn as Capaul (not the name he might make history) dressed his knitted cap and showing a large grey beard, took his idea to the government. He is still collecting signatures, but it looks good. Some of our politicians found that he was correct, and the Swiss cow should be allowed to keep its horns. Others were of the opinion that horns were a blemish on the cow face, and not necessary. Up to now no-one has asked the cow.

I am not really a political person, although I have my ideas. I leave the Swiss to get on with it, I can always vote no or yes and we vote basically every two months for something or the other, but this time I am adament.

Yes, the cows should keep their horns. What is a cow without a horn? And the photos I take of the Swiss cows look much better. We have a few exceptions in our neighbourhood where farmers allow their cows to have horns. I took the photo in a nearbye meadow on the river bank. There are three cows, all with horns, living with a bull who naturally has horns and even a bit more: he even gets a little horny now and again, but that is something completely different. I call to any Swiss reading this blog (there might be 3 or 4 of you) to support this idea by Mr. Capaul and vote for the protection of cow horns. We want happy cows and not cows with an inferiority complex.

Here is a link from the english languge Swiss Info The Man trumpeting in favour of Cow Horns. If cows are persecuted in your country then begin a campaign about it. I am sure Mr. Trump will list it as No. 1 priority on his agenda.

And now to go. The week-end shopping is established, we know what we will be eating, and it is all hanging on a cloud – this time a stratus cloud because it spreads between two iPhones, mine and Mr. Swiss. 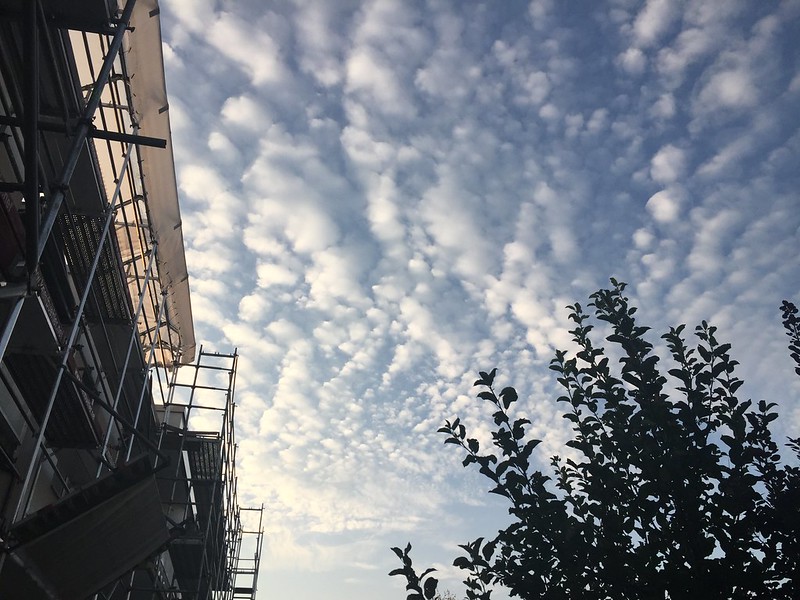 And do not forget, “PRESERVE THE RIGHTS OF A COW TO ITS HORNS”  vote YES.