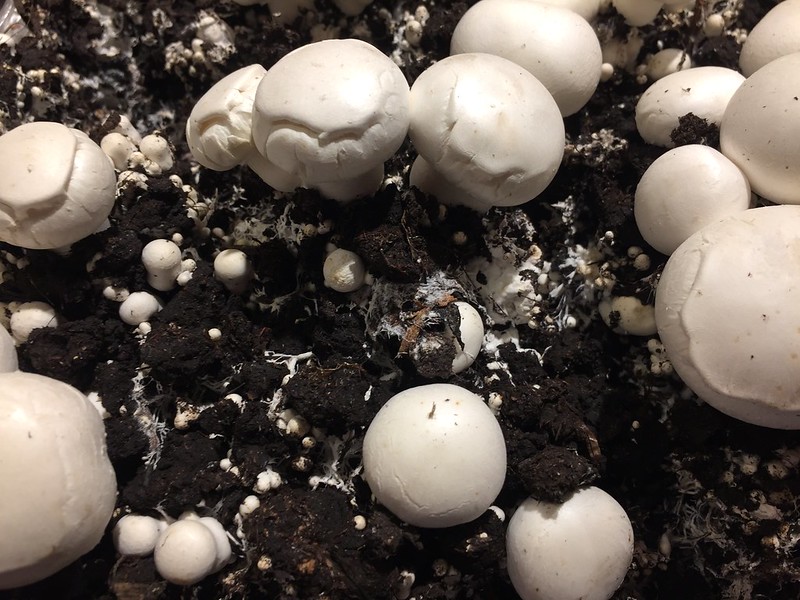 They were having a special highlight on mushrooms in the local supermarket. To illustrate their advantages they had a culture ready to see. I found it very original, as you saw the growing thing. A large box of earth and mushrooms, actually the sort we call champignons, growing in real life: an education for the kids, but they were not interested. It was only a golden oldie like me that took a photo. You could smell the earthy flavour from a distance and that’s all I have to say on this subject.

The word has not inspired me and  without the “u” in the spelling I had to think twice to discover what it was all about. Food has flavours otherwise we would not bother to choose something completely different to eat every day. It is the tast that attracts. If you do not like the food, it is because it does not have the right flavour. And then we get to the crux of the matter. Why is it that Mr. Swiss does not like everything I like. The opposite is also the case. He has a funny taste. How could he not like aubergine cooked as a vegetable on its own. He has to have it mixed with other veggies to hide the flavour more.

Our food life becomes boring when we only cook what we both like. This evening it will be soup and cheese cakes, although Mr. Swiss  would have preferred soup with various cooked sausages like Frankfurter or Wiener. I do not particularly like them. They are cooked in hot water and usually eaten with soup with a generous dollop of mustard on them and perhaps folded in a soft pappy bread roll. That is why we met in the middle, stayed with the soup, but decided on cheese cakes that we both prefer, at least I do. And so the week-end food plan continued as always: striking what he dislikes and what I will not eat. Eventually we are left with the usual, which seems to rotate every 3-4 weeks. Our food remains are flavoUrful but monotonous.

We do not even have a clash of taste because of our origins. I quite like Swiss food and he puts up with english food, although I very rarely cook english. And so our flavoUred life continues. Tomorrow it will be chicken in the evening. Now chickens are international, they are everywhere they all speak the same clucking languge,  after all it is not what you cook but the way that you cook it. My chicken will be covered in Dijon mustard, with a strong sprinkling of paprika and aromat. If you have a Swiss eating with you, there has to be Aromat somewhere. It is a yellow Swiss salty spice that is 200% glutamat and some flavour: very flavourful.

So en guete as we say in Switzerland before the meal. Whew, done another prompt again where I really did not know where to go with it. 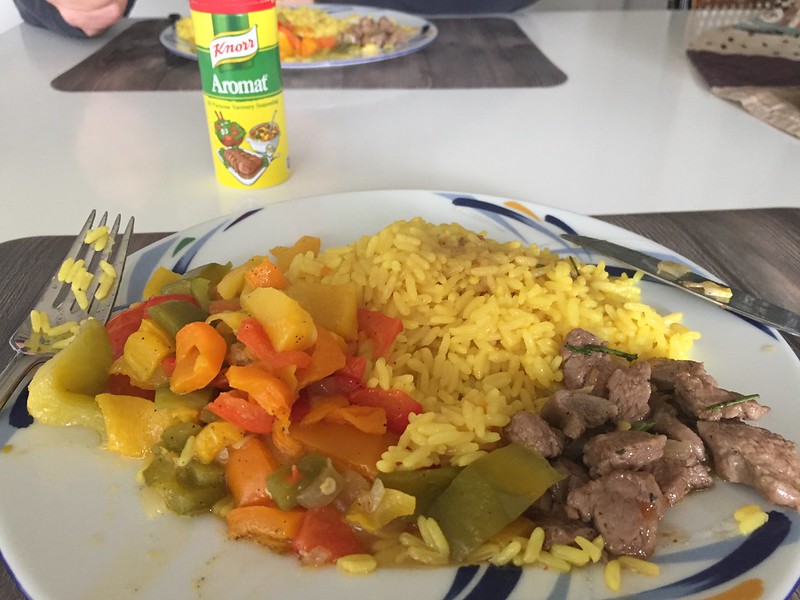