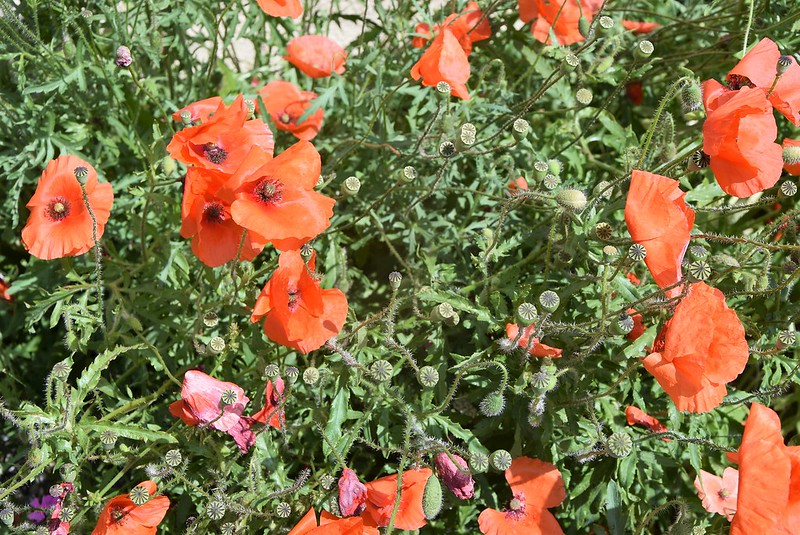 The arrive every year in the same place towards the entrance to the supermarket in the border and every year I make a point of taking a photo. 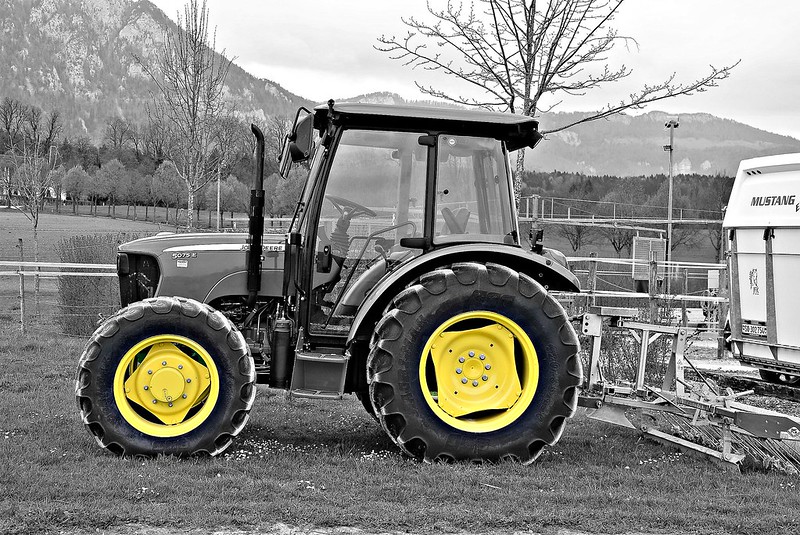 Tractors breed where I live 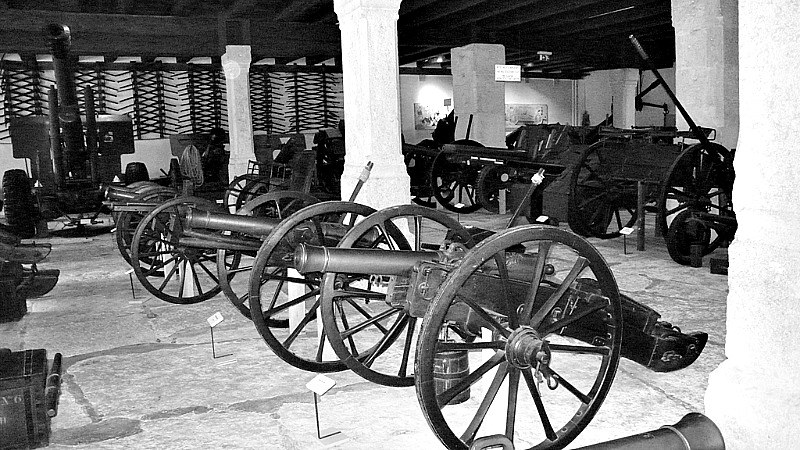 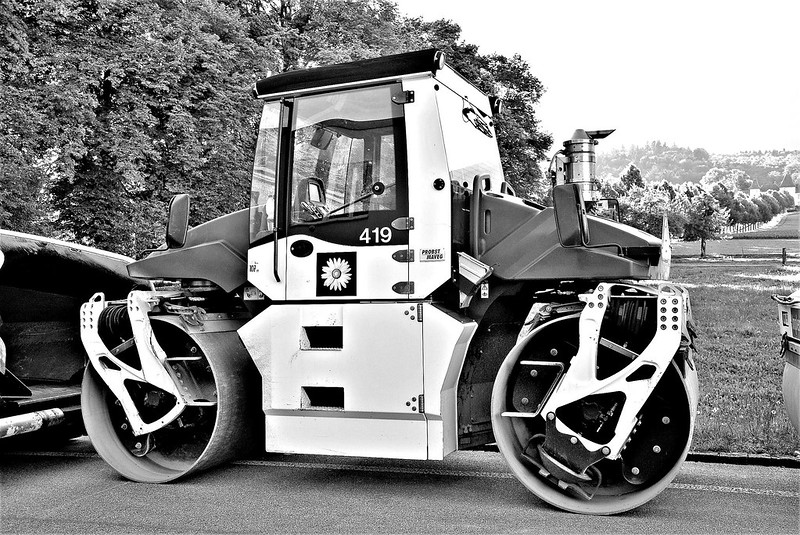 They were all parked in a row, various road machines. The idea was to repair the complete road surface in a night and a day and they succeeded. 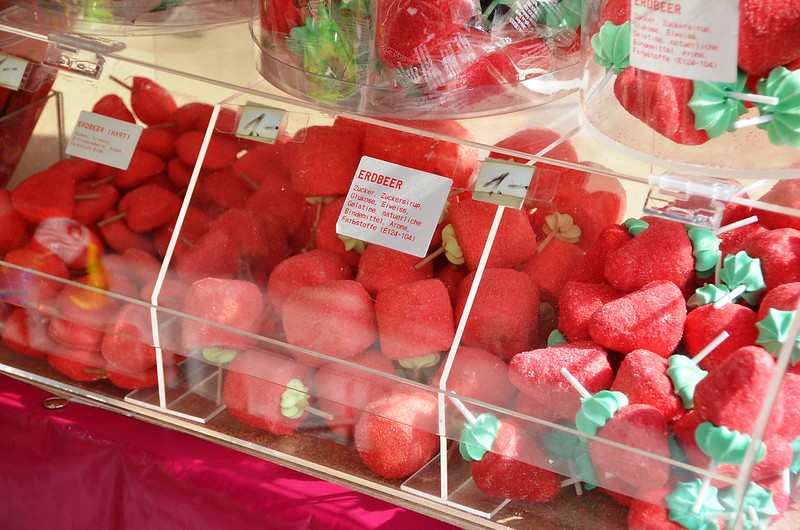 I do not even like lollipops, never did: even as a kid. I was more into chocolate. Even a toffee apple was better than a lollipop. They were real apples on a stick, dipped in liquid toffee and left to get hard. As they were left to dry on their base, you always had a flat bit of toffee at the end. The only photo I found of something like a lollipop were these strange sugar strawberries from a visit to the local market, all on a stick for better eating.

My all time favourite was Cadbury’s Chocolate Milk flakes, It was a long bar of chocolate, all very flaky and made a real mess when the pieces crumbled away. I suppose if I bothered, I could order them from the British shop by computer in Switzerland. I always bought a large paket at London city Airport before returning to Switzerland, but never lollipops.

If it is ice cream on a stick, I am quite partial, although I no longer eat ice cream.

It is a wonder I am still alive.The list of things I do not, or cannot eat, is becoming longer than what I actually eat. I quite like a snack after my midday golden oldie sleep, but today the cupboard is bare and so I have to go without and just write about lollipops, which I do not like.

I do not even fell inspired to write a story about a lollipop:

There was a scream for help. She opened the door and her friend stumbled into the room.

“A giant lollipop is chasing me. The lollipops have decided to revenge themselves on the human race, after being eaten for so many years.”

What did I say. I never liked them, they are evil. They are attacking us. Now toffee apples are something different. You can chew them. Lollipops die slower with every lick.

Daily Prompt: What’s in a Lollipop 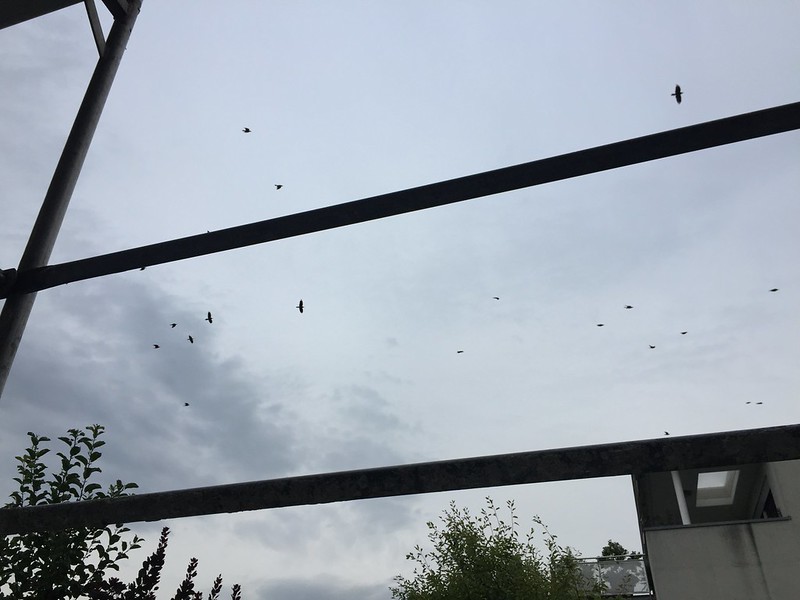 My first view this morning from the porch was a murder of crows gathering, probably on their way to a conference. It is not yet migration time, and our crows do not migrate. They stay where they are, especially as Mrs. Angloswiss feeds them throughout the winter with her bread remainders. It is a breezy cooler day today, and even a few drops of rain have been seen. Unfortunately not enough rain to deter our builders from working with their machines.

The ladder to the roof is placed outside our sleeping quarters. In the early morning hours when the builders arrive at their workplace and ascend the ladder, they first of all have lengthy noisy conversations concerning the events of yesterday evening whilst I am still dozing. The appartment next to ours is empty and will probably remain empty until the building curse is finished, but they constructed the stairway to the roof outside our appartment. It is definitely not a stairway to heaven.

Mr. Swiss and I have been living without No. 1 son for almost two weeks and realise that when he is here, we never have leftovers. I have to rethink my food supplies. We have far too much bread remaining at the end of the day and with one less you do not bother so much with evening meals. For two people it is not worth the fuss and bother. Some cold cuts, cheese and a little bit of tomato and cucumber does the job nicely. I eat my bread and jam for breakfast, but otherwise one slice is OK for the evening meal. I should also rethink lunchtime cooking. I am still making enough pasta and rice as a supplement for lunch to feed an army. It will be reheated in the evening, but then we do not eat the bread. I am sure a third world family would be shaking their heads at these remarks. 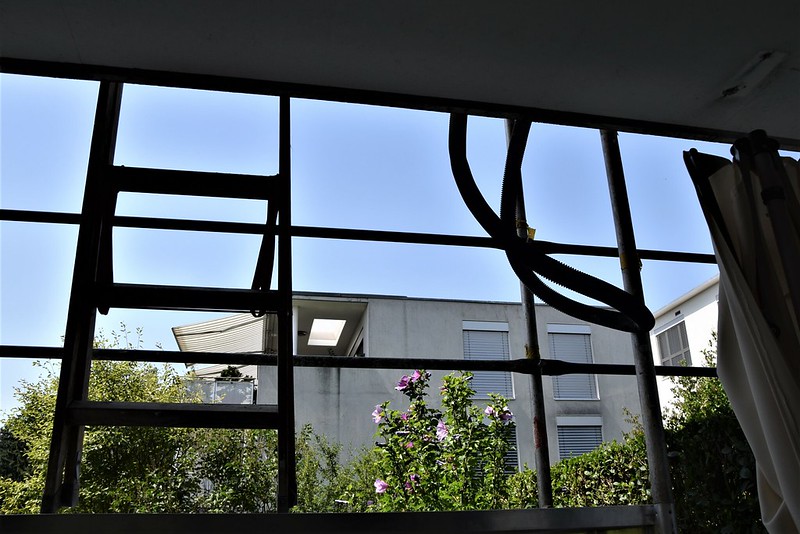 Yesterday I discovered that living with builders in the house can be dangerous. I was outside looking up in the scaffolding to see if anything exciting was happening. Just as I turned away a ladder dropped down in front of me. If I had still be standing there my fingers may have been trapped under the ladder. The guy on the next floor naturally did not see me standing there. A few seconds later a rubber tube arrived. On the other side of the appartent they had positioned cladding material on the scaffolding in front of my office window and in the evening we saw that a block of cladding material was dangerously placed in front of the remains of my hollyhocks and balloon flowers. Needless to say I “reminded” the workers to remove it before they made their way home.

Today is a day of rest for me. It looks like storm is approaching at the moment, but if the weather improves during the day I might venture an excursion this evening. I asked Mr. Swiss about our bus tickets and he was not happy. He suspects I am again planning something completely different for my evening walk. I have an idea, but no good causing too much worry, so I will keep it to myself.

My pink buddleia are now flowering. With this view I will leave you for the morning so enjoy. I will be back, I hope, this afternoon. Even a computer deserves down time in between. 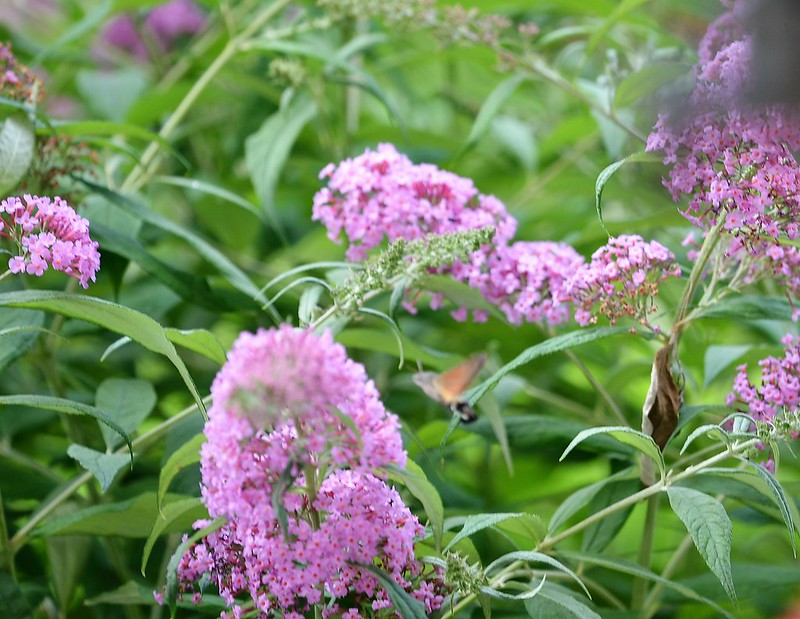