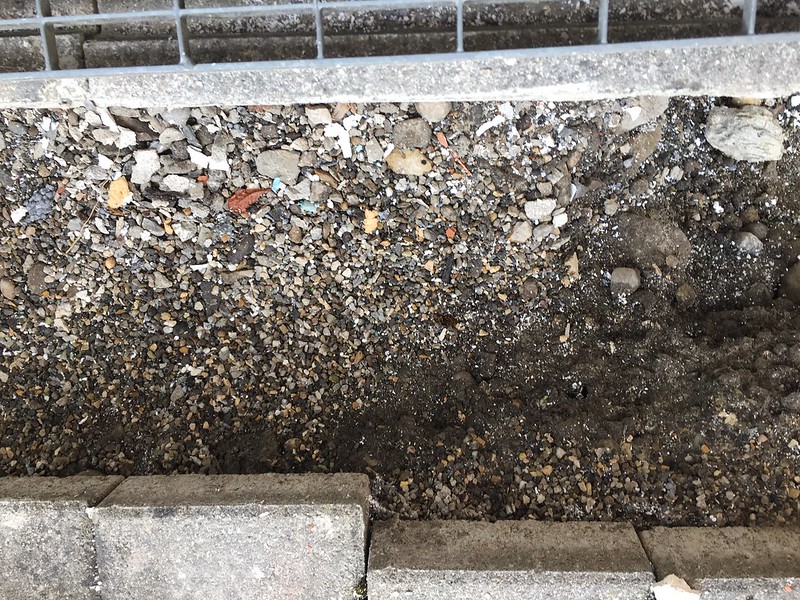 You want grit, we have tons of it. In front of the window outside, in front of the window inside. There is grit on my computer keyboard, on my table, and I am convinced we even eat grit. Grit is a building substance. Without grit a builder cannot survive, he has withdrawal symtoms.

“Where is the grit?”

“Have a good look, there must be some grit somewhere. I had a huge pile of grit this morning, where has it gone.”

“I saw her with a broom this morning.”

“She never asks, typical ignorance. Grit is our life and she ignores it. I was just about to stop her, but she disappeared. I think she opened a garbage can.”

“You mean she condemned our grit to a garbage can.”

“No respect for the builders. Do not despair, I have a hidden pile of grit behind the wall.”

“Thank goodness, so shovel it over here and make a nice pile. I will flatten it to cover everything.”

“But make sure there is a breeze blowing when you move the grit.”

“Of course, the first law of builders. If you move the grit, be sure that it is blown everywhere. But hurry up.”

“It looks like rain. If you move grit in the rain, we all know what happens.”

“Yes, it will not spread but stay stuck in the same place. The effect is not the same.”

“Wait a minute cover up that pile of grit. She is approaching again with the broom. Does not show our gift for creativity”

“She is not only carrying a broom, but a shovel as well.”

“It’s time to go home now. Cover the grit with plastic and put a brick on it to stop it blowing away. Perhaps put a sign on it, “GRIT, do not move”.”

“Good idea, then our grit will be remain until tomorrow.”

“Yes, I was thinking about shifting the grit to the top floor.”

“Great idea, when the wind blows we will have grit everywhere. You deserve promotion for that suggstion. I will tell the boss.”

“Thanks, but wait a minute, he is busy and I would not want to distrub him.”

“He is pouring grit onto her lawn. He is not the boss for nothing. It is one of the most important builder rules. She will never be able to sweep the grit out of the lawn with the broom.”

“What was that scream?”

“I think the boss went too far. She stabbed him with the broom handle.”

And another one bites the grit. Honestly it was not me, but these builders everywhere around my appartment can really drive you to drastic measures.