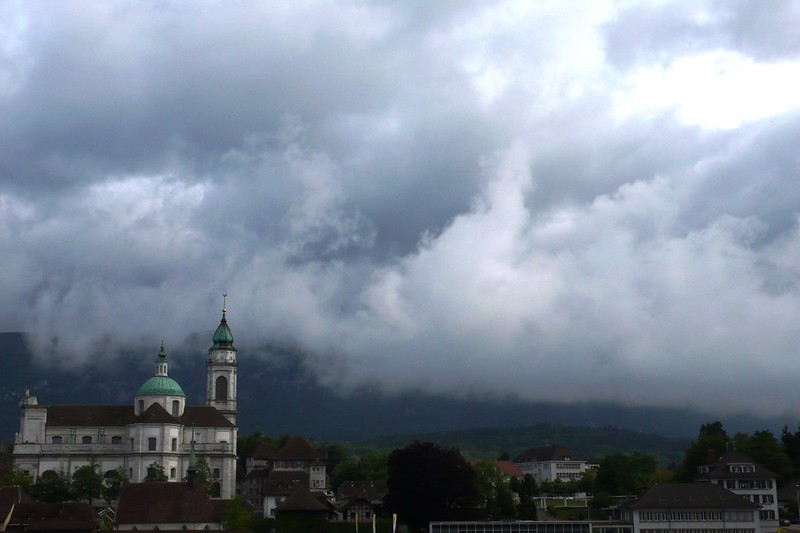 I do not mind rain, nature needs it for the plants to grow and we all need water, so it can rain, but not when I go to town. I got myself ready and Mr. Swiss tells me about taking the rain jacket. I do not like wearing a rain jacket. It is quite a good rain jacket, in dark blue, the modern fibre techniqe and even better I got it free, did not cost me anything. It was one of those gifts from the company I was working for, I cannot remember why we got it, but you do not look a gift horse in the mouth – you might get bitten.  I remember there were two models available, for the man straight down, and for the lady with a shaped body. I went for the straight down version as it suited my figure more. The curves had already disappeared.

So I put the rain jacket in the car, hoping I would not need to wear it. As we left the garage we had to switch on the window wipers in the car as the heavens decided to open up. It was a bit of a complicated outing this morning as Mr. Swiss had business on one side of the town, and the shops were on the other side of the town. He said he would drop me off and give me a call when he was finished and pick me up. It was quite complicated when I left the car as I had to put on the dreaded rain jacket and could not find the entrance for the second arm – we all have those moments. I hate this jacket particularly, as it gives you a feeling of being in the sauna when wearing it.

Eventually the operation was completed and Mr. Swiss left me to my destiny just around the corner of the supermarket. I first of all took a photo of a large crane which was positioned just along the road. I proceeded to the supermarket, which was no longer where it was, but two doors futher along, because where it was was being rebuilt – the reason for the crane. I was not very happy, it was not rainining cats and dogs but elefants and ostriches. When I arrived at this makeshift supermarket I realised the mistake. An assistant asked me if she could help. I asked where the butchers section was, she told me they only have prepacked meat. I decided that buying prepacked for only two people was not the solution, and so I took it upon myself to walk futher to the other supermarket on the other side of the road. It was still raining.

Walking with a stick in one hand and a shopping bag in the other gives no opportunity to carry an umbrella, but I had now become a “hoodie” a hood not being the most attractive thing to wear. Luckily I only had a few things to buy and as I was leaving the supermarket I heard ducks quacking. Aha, Mr. Swiss was calling on my mobile phone. It was perfect timing and so we walked to the park house together in town to pick up the car. We are golden oldies, no longer the youngest. Have you ever forgotten where you put the car? Of course not, it was just a little problem of searching on the second flood down, instead of the third where the car was. Half an hour later Mr. Swiss found our car and we drove home. We were not happy and I was sure it was so late I would miss cooking dinner because I would rather starve than stress.

Today was not a day for capering, it was more a funeral march.

Daily Prompt: Capering in the Rain

5 thoughts on “Daily Prompt: Capering in the rain”