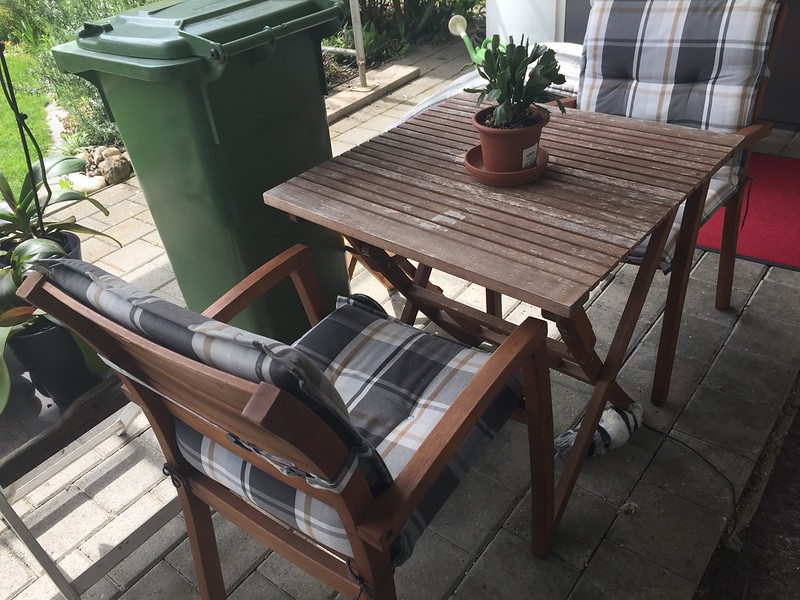 They said this was just temporary. Only a few months. I had to find my own temporary solution. They removed my space outside, but only for a summer. Where there was a large table big enough to eat meals, to work on the computer and even room left for a few flowers, it has all had to be reduced because there are changes. But this is only temporary they say, although how long is temporary. This temporary will be until October due to the renovation work on the building where I live.

I was once a temporary in the real sense of the word. We called them Temps in England. I was a shorthand-typist by occupation and worked in the City of London. It was in the good old days when the computer was still a typewriter and if you were lucky if you had an electric computer, as they were usually reserved for the director’s secretaries. However, I had a firm job working for a shipping company in London, near the city. After a year in the same job I decided  to search for something different. I went to an agency and signed on as a temp. This suited me. I worked for the agency, had no paid holidays and my wages were by the hour and notice could also be given by the hour.

Perhaps it might not sound so posiive but the wages were a third more than normal and I never knew where I would be working until the end of the week. The offices where I worked were mainly in the City of London. Once I had a great job in a chartered accountants in a newly built high office block next to the Mansion House. We had a selection of quality biscuits with the coffee in the morning as well as the tea in the afternoon, served in porcelain cups. I was assigned to one of the accountants, a city gent, and they all wore the uniform of the bowler hat and umbrella. It was a great job. I was only there for a couple of weeks (unfortunately) whilst one of the girls was on hoiday.

However not all jobs were perfect. I worked for the warehouse of Thomas Cooks in Farringdon, the british travel agency, but they also did goods transports. It was a terrible place to work, and all the girls, about 8 of us in the office, were temp, because they never found anyone to work there permanently. The office was situated above the canteen kitchens. I never ate there, and from the smell that we were getting all day, I would not have watnted to. Our men were many in the main office, from all parts of the world, and we girls were assigned to four men each. This meant we took their dictation and wrote their letters. If you ran out of work, there was one person that always had something. This was my mistake. I often ran out of work, and helped him with the result that he also had no more correspondence to dictate. It seems this had never happend before.

The next week when I reported to work on Monday morning I had a new list of men to work for. The four top managers of the department. I complained and they did go a little way to change things, but I was probably too good. I stayed there for a complete winter, because I knew I had a sure job throughout the Winter as they would never find anyone wanting to work there otherwise. Temps were usually only fully occupied in Summer because of the holiday season.

I worked in an office for engineering in the city and it was the beginning of the photo copying deivices. They were not yet Xerox style, but a bath with developing liquid. You had to dip the  positive and negative paper into the bath and pull it through somehow and got a copy, but you could not really call it a photo copy. It was a messy job.

I worked in the local government office for social workers typing the social cases, and I learned that not everyone had such happy lives. One woman had a child that was yellow and there were debates going on who the father was, as her husband said it was not his and probably the chinese neighbour.

And so life went on. I picked up my wages in the temp office once a week and eventually gave in my notice. They were a little annoyed as I did not get my new job through their agency.  I told them I had asked a couple of times if they every had anything abroad but they did not, and now I had found a job in Switzerland. That was the end of my temporary working situation, but I loved it this way of work. Almost every week a new adventure and the pay was great. This all happened in 1965.

Daily Prompt: I was a Temp