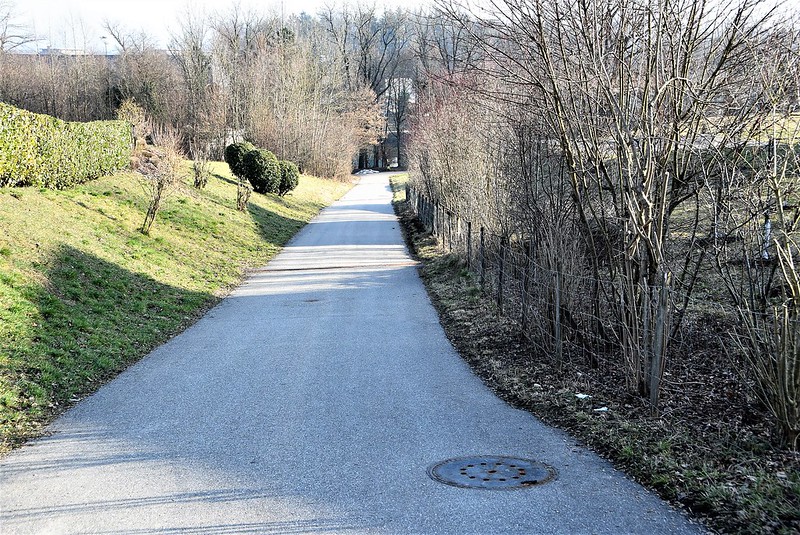 Today I decided to take a walk along the River Aar, which is just down this path from where I live. This path is the first part of learning to cling to whatever help you need. I cannot walk without ai , and have a walking stick. Tenacity  has now become my second name, but I succeed. Sunday afternoon is not the ideal afternoon to go for a walk along the river, as it can become a communal walking, biking tour. Everyone is out enjoying the pleasures of the open air. Today was not different, and already on this slope there were walkers walking upwards, whilst I was walking down. In Switzerland you greet everyone you see on a walk, no matter who and so I was busy with my german greetings to everyone. There was a gentlemen whom I greeted. He was about my age, with a baseball cap. He returned the greeting, Hello Mrs. Angloswiss. The thing was that although I greeted him in a friendly manner, I did not have a clue who he was, but he must be an acquaintence, otherwise he would not have known my name. At least I will not get the reputation of being unsociable.

And so I reached the river bank in one piece. The sun was beating down and it was warm. I have decided it is not time to take out the bermudas for the next walk and let the sun get to my legs. Here and there I was shooting a few photos as a memory of my walk. The next pasrt was easier, no tenacity required, it was flat. The only accident I could have would be to trip and stumble and fall into the river. Luckily the river is not deep at the edge and the path is far enough away. It is now a straight stretch to the next bench which would take a normal walker five minutes. It takes me a quarter of a hour. The bench was empty but there was a group of young people, from another country (eastern europe most probably) sitting on blankets on the river bank next to the bench with accompanying music from their radio which had an ethnic tone to it. I took another photo, a boat passed by. 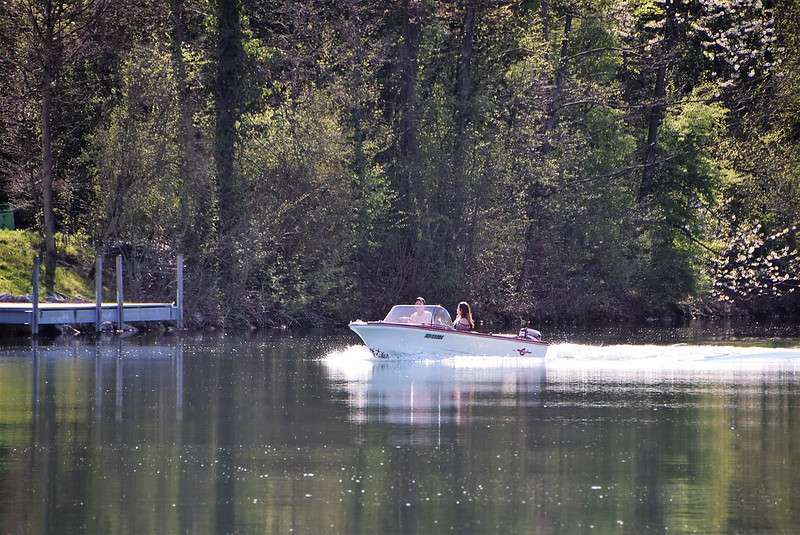 Sunday afternoon is really the time to go to the river. It was almost like the rush hour in London but no commuters. Families with their bikes, walkers, joggers etc. After my five minute rest on the bench I decided it was time to begin the ascent to the river bank – no problem, just 69 steps to conquer. I hold the railing with the left hand and support myself with my stick with the righthand. 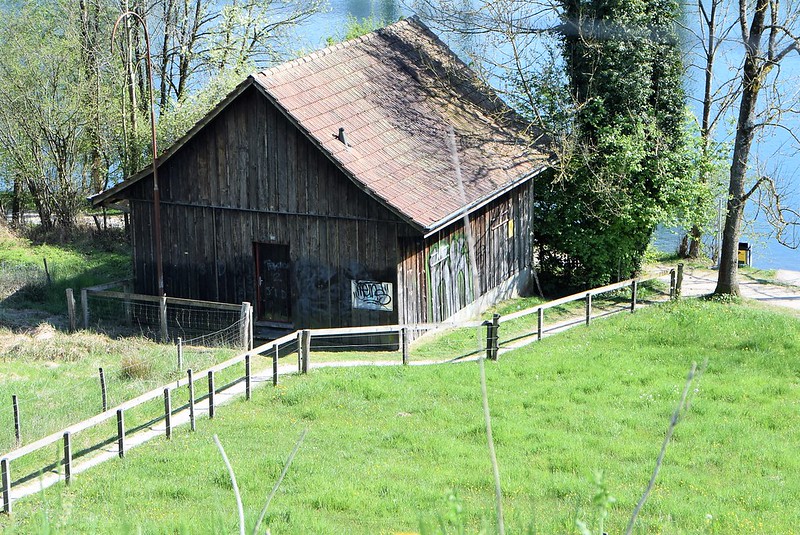 This is the first part of the ascent and my bench is placed just in front of this hut. As you can see the ascent begins with a slope and no steps. That is probably an encouragement as anyone can walk a slope. As I was on step 69 I breathed a sigh of relief and noticed that my friends the sheep were now released from their Winter quarters. They all had a fresh hair cut, but were having a siesta in their Summer quarters. 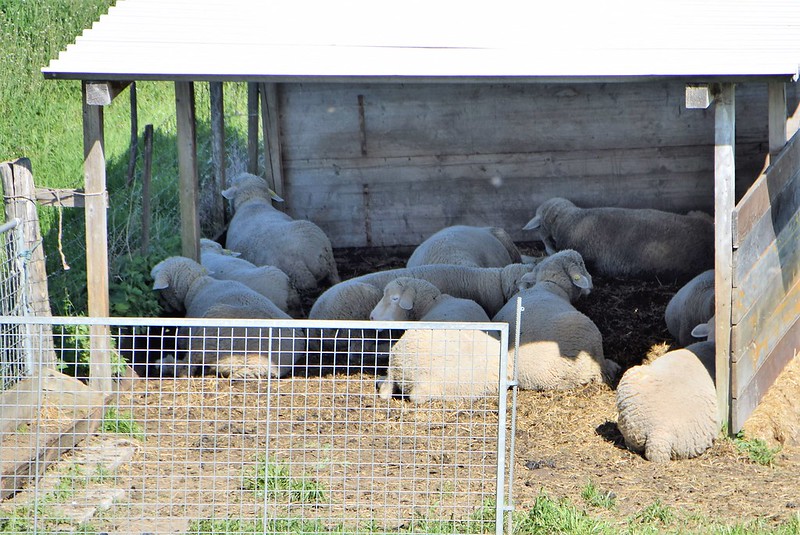 I decided not to bother them for a photo session. I think they were recovering from things that sheep do when the are released after their Winter of indoor living, like spring around and jumping up and down. They had turned their backs to me in any case. I will be back for a few action photos later. 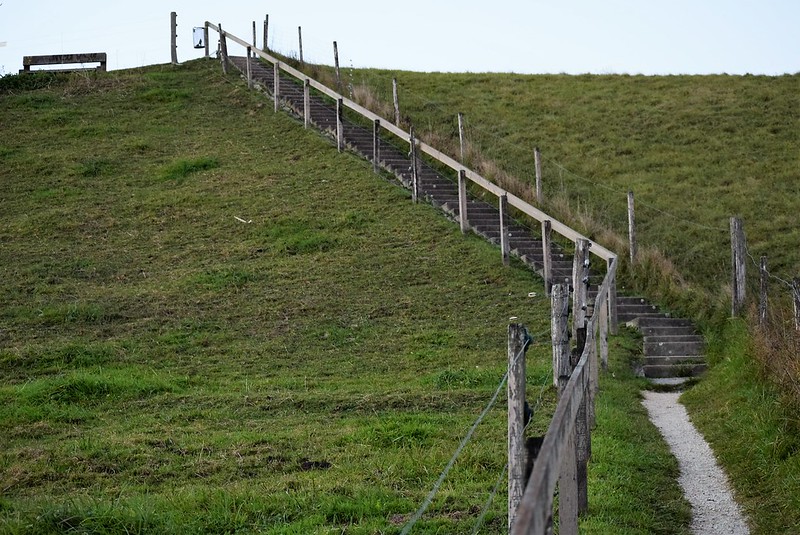 After completing the ascent to the top I was glad to see that my next stratigic placed bench was free and so I sat tenanciously on the bench. It is not so easy to sit when you have to find a resting place for your cane and well as managing to sit comfortably. The 69 steps were now overcome and I was rewarded by this view from the top across the river towards the Bernese Overland. 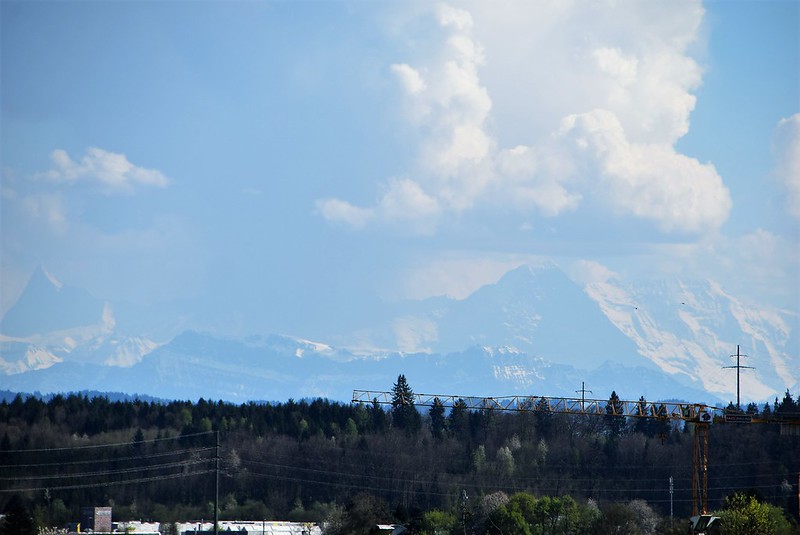 The moutains were on their better behaviour today and the sight was good. I decided it was now time to return home. I was feeling tired, but at least I went places and saw something. I again survived with no problems, but when I arrived home I sunk onto my bed for a quarter of an hour to recover.