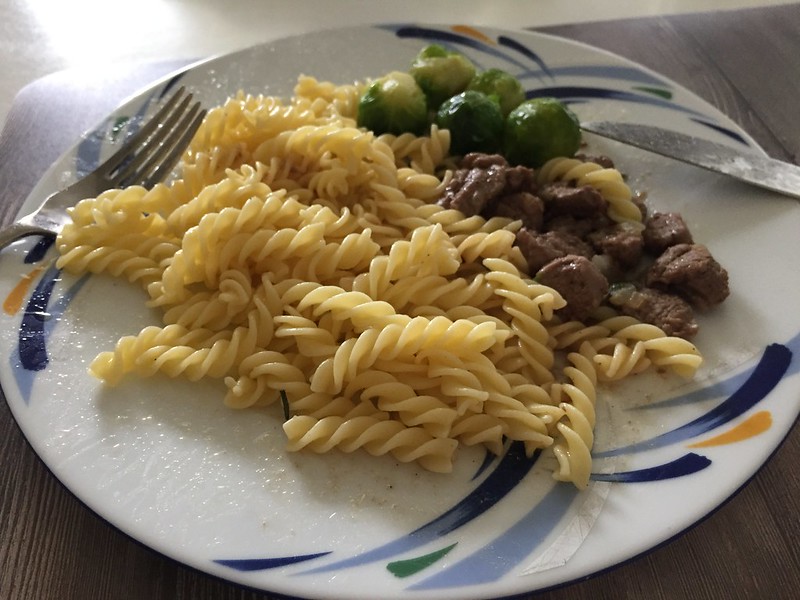 I love watching the cooking programmes on the TV, mainly BBC Master Chef, at least I used to until I discovered after a year it was all the same sort of thing. Although that does not answer the question whether I actually like to cook. I love the idea of cooking, but the actual work is often in the way. My cooking life became an adventure. In England, land of potatoes and greens,  mum always said “I pity your old man when you get married, he will be living on fish fingers”: not exactly, although even fish fingers have their attraction for a quick meal.

I married a Swiss, the combination of French, German, Italian cooking and yes, the Swiss also have their traditions like Rösti, Fondue and Cervelat salad. I learned it all, I had to with four kids and a hungry husband. Enjoying it is something completely different. Cooks in a restaurant and TV enjoy, because they only cook. The cleaning afterwards is done by their staff, they can just sit down and admire the results, or perhaps not. In the TV world of cooking everything is edible, most of it, they do not have tough meat. Even the chips are served in a neat pile, and can be counted, each one the same size and shape.

Today was quite funny. Mr. Swiss and I were at the supermarket to buy food. Today No. 2 son was also at home, and he does not eat brussel sprouts, he is autistic and probably thinks that green is not a colour you can eat. So we arrived at the butchers counter and our favourite butcher was serving. “Good Morning Angloswiss family” he said although used our real names. We do not go under pseudonyms in public life, only in blogging life. “What  would you like?” and Mr. Swiss and I did not have a clue. We thought perhaps lamb, or chicken, as when No. 1 son is at home we eat meat with lunch, otherwise we do not bother so much.

The butcher showed us lamb filet which was reasonable in price and so we decided “yes”. The butcher, who was also once a cook, said would recommend “schetzeln” which is a Swiss expression for slicing the meat in fine pieces, something that I have never seen in England. Mr. Swiss and I found that a good idea. and the butcher continued recommending how. I said with finely cut onion and pressed garlic, and he complimented the suggestion with fine herbs. I told him I have rosemary and sage growing in the garden and he found that would be excellent, with a fine touch of madeira wine. Mr. Swiss added that Mrs. Angloswiss was a good cook (he had not choice to say anything else, otherwise he could have cooked lunch himself) and so the decision was made. We had a remainder of brussel sprouts in the fridge and cauliflower, so what could possibly be better. This together with pasta would be ideal. The result can be seen above.

Going shopping, buying the food and cooking it by midday is a matter of logistics in the kitchen, but today it worked fine. Forget the meat, it is filet, needs only a few minutes. I boiled the water for the pasta and the brussel sprouts, the cauliflower remains went into the microwave. In the meanwhile I sliced the lamb and an onion, prepared a clove of garlic and spiced the meat with pepper and aromat (a swiss herb that every swiss must have in his food – you even take it on holiday with you in case you cannot buy it where you are going. I did not forget my sprig of rosemary and sage fresh from the garden. About five minutes before eating I fried the meat (in butter, because I fry everything in butter) onions and garlic, added a little wine and dinner was served. That is a meal I more or less enjoyed cooking. No big preparations, or time needed and yes it was a success. Mr. Swiss and I ate the brussel sprouts and son No. 1 was happy with his cauliflower.

Cooking is a necessity and I say make the most of it, we housewives do not have a choice. I have a dish washer, a well organised kitchen, and even a Mr. Swiss that clears it away for me afterwards, just like Master Chef, although I do help of course. It seems the only little problem is presentation. I do not create a work of art with my meal as it would probably be cold by the time I would serve it. It is there to be eaten and not to be hung on the wall as a painting.  It is served from the pans onto the plate. We eat in the kitchen and so the food is on the side where I cook it – no problem. What comes on the table are just the plates with the food and cutlery.  That is how I enjoy cooking. I no longer enjoy having guests for dinner or for a meal, unless they are family and I do not have to put on a show.

Just remember, let’s eat to live and not the other way round, then I am a happy cook.