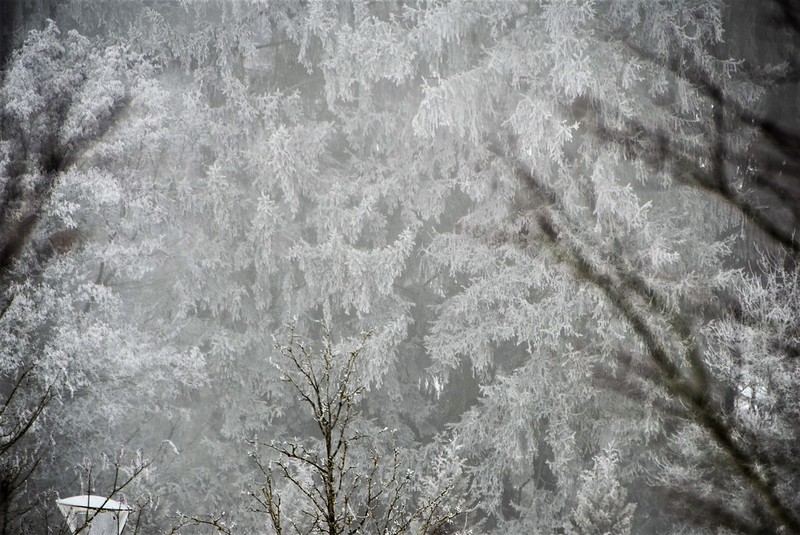 We are living in frosty times at the moment, speaking locally of course. Yesterday I took a glance out of the window and saw that the forest at the end of my settlement had put on its deep winter coat. Either you think, “blimey it’s cold out there” or you think, that would make a great photo – perhaps something for a Pulitzer prize. I dived into my cameras, decided on a neat 200 lens as the 300 would not have captured such details, and this is the result. I also took a few photos with my mobile phone camera. I just took another look out of the window and the frost is still there. Mr. Swiss said this morning we have -7°C and it will probably not go over freezing point, 0°C, today. It does not really bother me. I do not feel cold indoors and not even when I go anywhere.

I finished my book, The Essex Sepent, yesterday evening. It was something completely different. An online colleague wrote a very good critic of the book on her site, which I chanced upon. However it was written in German, which is not a problem for me. I was drawn to the book because of the title. Essex is a county/state bordering on the East of London and I have many attachments to Essex. My parents move out to Essex when their house was demolished in Bethnal Green in the slum clearance programme and many of my uncles and aunts were already living there.

However the part of Essex where they lived became part of Greater London, and the Essex referred to in the book was more into the coastal regions. I was thinking on terms of science fiction with this book, but it was more into human directions. It took place in Victorian times, no problem, I love Victorian times. It was more a story  revolving around families, social situations of the time, a village and various aspects of Victorian life. Even Bethnal Green was involved, the part of London where I grew up, as one of the characters lived there and his social background became part of the events. Generally for me it was something completely different. I found it a good book, but not more, perhaps not my sort of thing.

I have now discovered a police series by Helen Durrant, involving two police officers, man and woman. All her books in this series begin with the word “Dead”, I have the first book in the series “Dead Wrong” so it sounds nicely morbid and promising.

I still have a remainder of the dreaded, a head cold which tends to travel to the throat now and again causing an annoying cough in the middle of the night. I could say it has improved, if it were not for the annoying cough. Today they are letting me out again, so I will probably wear my woolly hat. I do not like wearing hats, it is not me, and it irritates my head when wearing it. On the other hand Mr.Swiss finds at my age, it is no longer so important. I am still working out what he actually meant. Anyhow he accompanied me on my hat wearing excursion so it cannot be so bad. He always wears his english “Andy Capp” when we go out in Winter, the head gear of every working class englishman, although he is probably one of the only Swiss wearing one. He was talking about getting a cap with ear flaps. Yes, we are all getting older.

And now to move on, there are places to go and things to do. “Yes vacuuum cleaner I am coming, just be patient.”. These household gadgets seem to develop a life of their own.

Keep safe everyone, see you around.