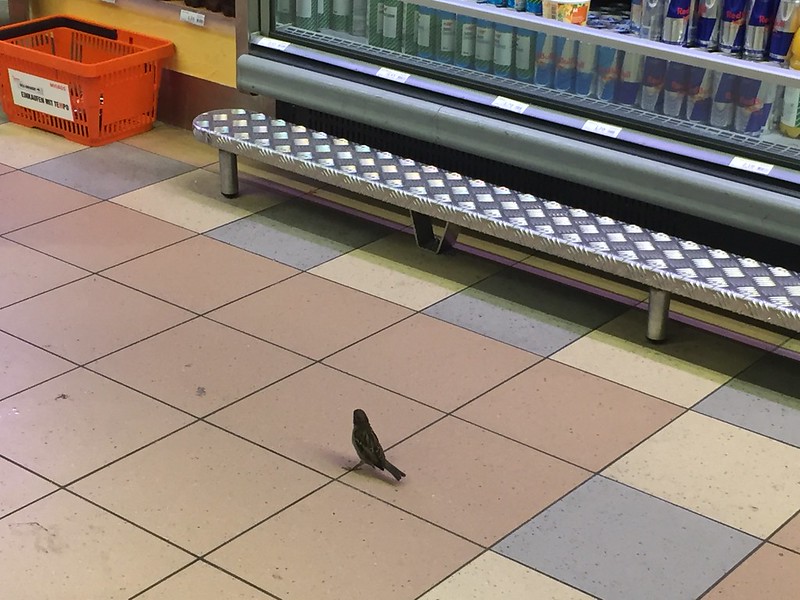 A usual Monday morning in the supermarket. Nothing particularly interesting. A re-union with our butcher, who was waiting for family AngloSwiss to arrive. We moved on to the vegetables and on the way there he was, the intruder. He was not really an intruder. He just took the wrong path and fluttered through one of the spaces from outside to inside where he or she was overwhelmed by the choice of goodies and pecking opportunities. The sparrow was perched on the ground taking a look at the overwhelming rows of nicely packed food.

This was a chance not to be ignored. Mr. Swiss walked on and I pulled out my mobile telephone and began to shoot photos. I would have liked to have taken some photos with my camera which I also had in my bag,  but was unsure how long the sparrow would be my model. There was a golden oldie couple also choosing their goods from the supermarket shelves. I became an object of attention naturally. I suppose normal people do not take photos in a supermarket. They make a sour face of unapproval – a sparrow flying around in a supermarket, how unhygenic. Actually the male golden oldie did smile when he saw me taking photos of the sparrow, but his wife ignored me with disapproval. 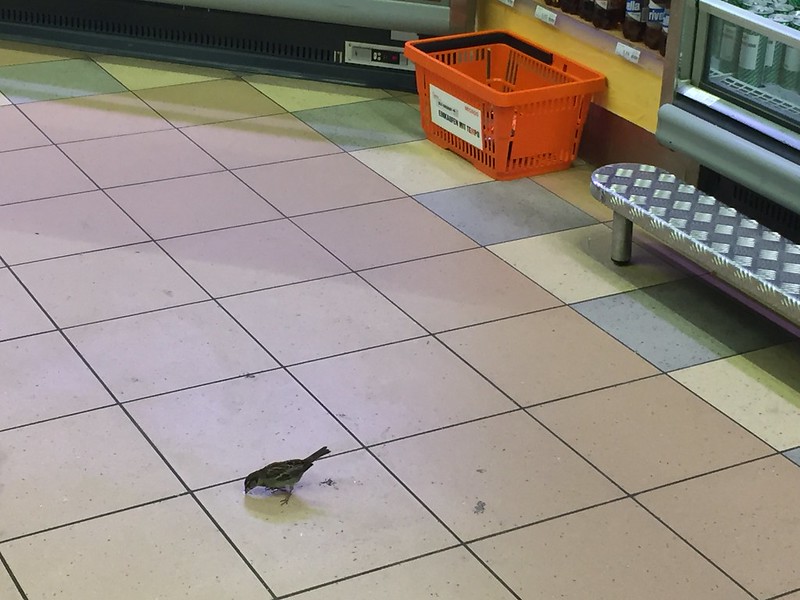 The sparrow paused and made a discovery: something a human would have ignored, not being qualified as food. However, sparrows live in other proportions, size is relative and even if we do not even notice a crumb of food, the sparrow does. It is nutrition, so have a peck and swallow it, there might be more where this came from.

In the meanwhile the sparrow decided on a flight and ascended to the ribs of the roof, which were ideal perches for a “bird’s eye view”. Unfortuntaely he was now too high and too far for a clear sharp photo. I tried, but they resembled a fluffy blurr instead of a sparrow regarding the supermarket from the skeleton of the ceiling.

It returned and I continue to take photos. The gold oldie couple were now moving on. Did I see the female shaking her head thinking that sparrows really did not belong in supermarkets. Her partner moved on with her, he just wanted a quiet life. I also moved on and passed the meat counter again. Seeing the assistant I told her of my discovery of a sparrow in the supermarket, I was full of admiration for the sparrow naturally. She said “is he still here” with no great enthusiasm, so I deduced it was probably a normal situation. Sparrows just do not follow the rules it seems. They are continuously making mistakes, vicims of oversights, although perhaps in sparrow psychology it was judged as a lucky break. They had discovered the land of milk and honey and were not prepared to go, until everything had been tried.

We left the supermarket, after I stayed a while in the flower department to see if they had anything worth a photo – they did. On the way Mr. Swiss informed me that probably not everyone has so much pleasure seeing a sparrow in a supermarket as I do, as they might not even approve of me taking photos of the sparrow. After all the sparrow was an intruder, he was in the wrong place at the wrong time. I was sure that the sparrow was happy to be where he was and was absolutely not of the same opinion.