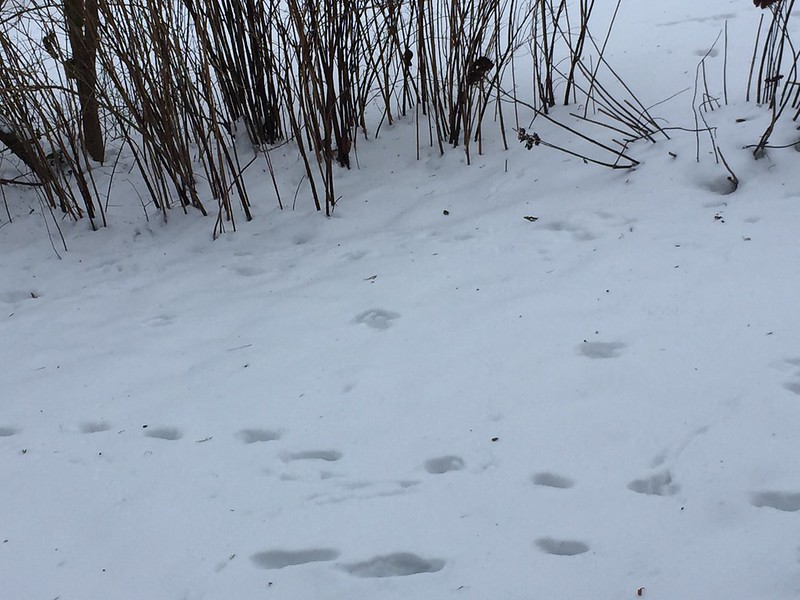 I have discovered strange footprints in the garden. I often find pawmarks from various felines,  even claw marks from birds, but these are in the middle of the garden and cut through the snow. If Mr. Swiss goes on a walk through the snow he tends to remain at the edge and does no cut across the garden, and these are not human footprints. I asked Mr. Swiss and he found it could be a dog or a fox. We have no dogs here and foxes keep themselves to themselves usually. Foxes do not have such big feet. I am convinced that we have some sort of mysterious creature walking rhough the garden in the night. 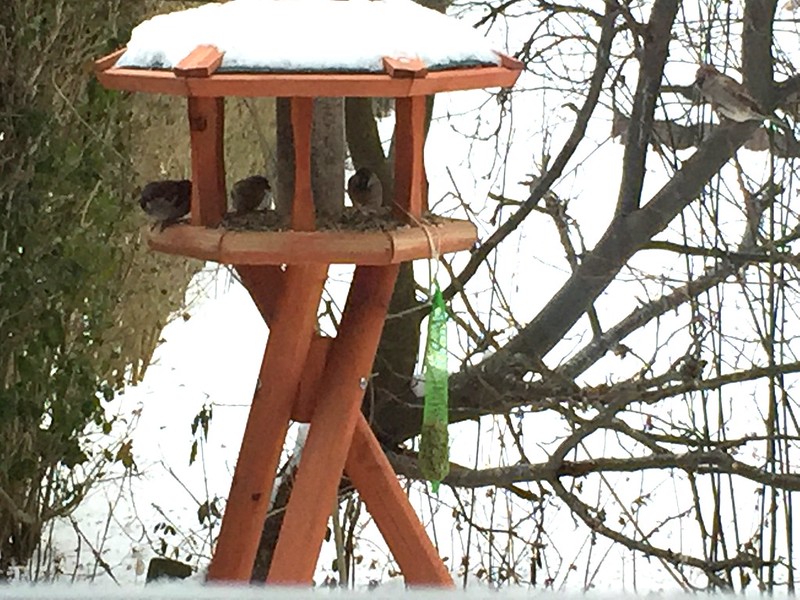 I just checked on my birdhouse, but the sparrows are having breakfast, and do not seem to be worried. Perhaps it is my imagination and I have been reading too many mysterious books, or watching too many horror films on the TV.

Yesterday was a week-end shopping day, although both of us did not really feel like it. Our colds are gradually receding, but we are still breaking all records in the usage of handkerchiefs. We eventually managed to put together a list of things we wanted to eat over the week-end, although both of us have no real appetite. Yesterday evening we decided on those little cheese tarts with soup, and Mr. Swiss passed a remark that the soup is now becoming monotonous, as we seem to be eating soup at least three times a week – I had to agree. When we had finally completed our shoping safari, we were both glad to arrive again at home.

I did not watch the Trump inauguration yesteray on our TV and neither did Mr. Swiss. It might have been a historical/hysterical moment in history, but cartoon characters were never my thing, as I cannot take this man seriously. There was a political discussion on Swiss TV yesterday evening about the immigrants in Switzerland that are now in the third generation and should be given Swiss citizenship. The funny thing is that most of them do not even want it. I found the complete discussion boring and no-one really had anything useful to say. We can all have a vote on it some time in the future being a direct democracy.

I now have things to do and places to go, like a living room, bathroom, and cleaning through the place. Funny how you realise these things are really not so important, when you feel under the wearther. My head now resembles a church hall, full of resonance and echoes. The cold is receding and leaving behing empty spaces. I booked my doctor’s appointment yesterday for my test to see if I am still capable of driving a car at the age of 70. I then discovered that this is not a one off, but must be repeated every 2 years. Mr.Swiss said I should not despair. Our neighbour, that is now over 90 years old, is still driving a car, and if she can do it, so can you.

And now to move on, see you around, enjoy the day and keep an eye on those mysterious footprints in the snow – you never know.