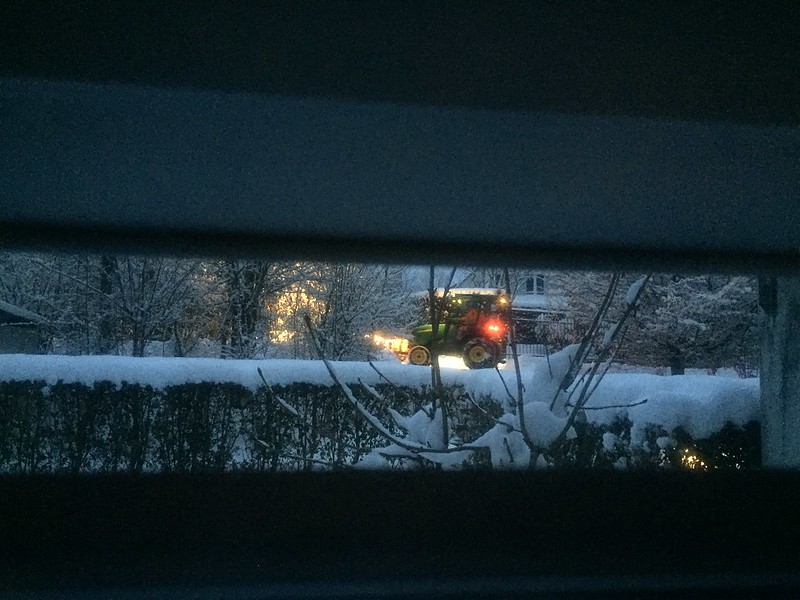 Sorry for the almost panorama view on the photo, but it was one of those mad moments when I was searching for my senses, just having left my bed, and heard the noise of the snow machine outside the bedroom window. Being dressed in my night dress and not resembling Caroll Baker in the film “Baby Doll” I did not lift the blinds, and took a photo with my mobile phone camera in between. I took at least 8 photos to make sure I got what I wanted. I have been trying for a snow clearing action photo for some time, but the plough only appears when I am not ready. I decided this morning it was now or never.

It makes a change from photos of blackbirds, as at the moment that is all the action I am getting outside the kitchen window. Mr. Swiss spread some goodies this morning, their favourite “fat” food with the oats and seeds, and now they are having a pecking competition in the snow to see who finds the most. There are a few sparrows cheering them on from the tree, where they are hanging onto the net containing the food ball. It is really action in front of the window at the moment. The crows and magpies are out in the snow covered landscape looking on in sympathy at the small fry. Mr. Swiss just remarked we have a real bird “mecca” in our back yard.

Yesterday evening I at last organised my cameras and their attachments in the cupboard where I had decided to put them. I moved the stuff in the cupboard to the bottom drawer and removed my camera stuff from the bottom drawer. I then realised that my cameras needed more room in the cupboard, so had to rethink my logistics. In the meanwhile I have found a solution I hope and will have another try today. I discovered two lens that I had almost forgotton I had. I also found three camera bags, which I never really need, but can use them for keeping the bits and pieces that belong to the camera. I have endless attachement wires for transporting photos from the camera to the computer which I never need, because this cyber golden oldie does it all with the chip in the camera. I must lead a boring life, when I occupy myself with such stuff.

And now to the work. Today I have a special Angloswiss pork roast which I would like to have in the oven within the next quarter of an hour, so I should make a move, preparing the veg and the meat. Today I am not going anywhere because I am homebound due to snowy circumstances. It is not snowing at the moment, but we now have at least 10 centimeters so not exactly inviting when you need a stick to support you. 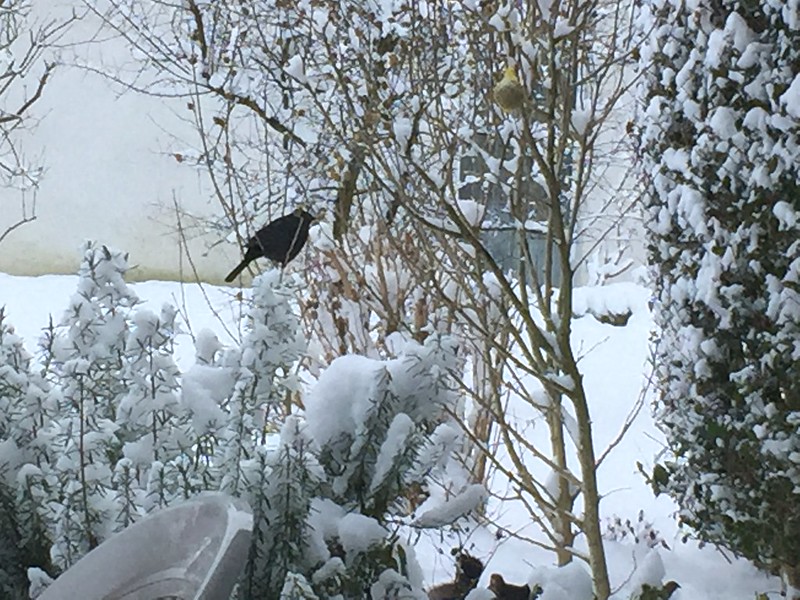