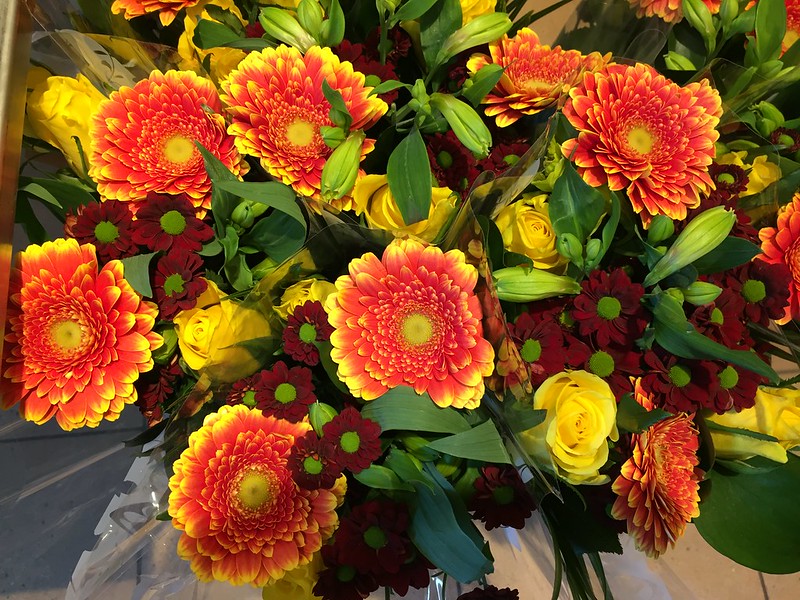 No idea what they are, but very pretty and flashy colours. Perhaps the triffids are breeding new species. They are everywhere and attempting to take over. 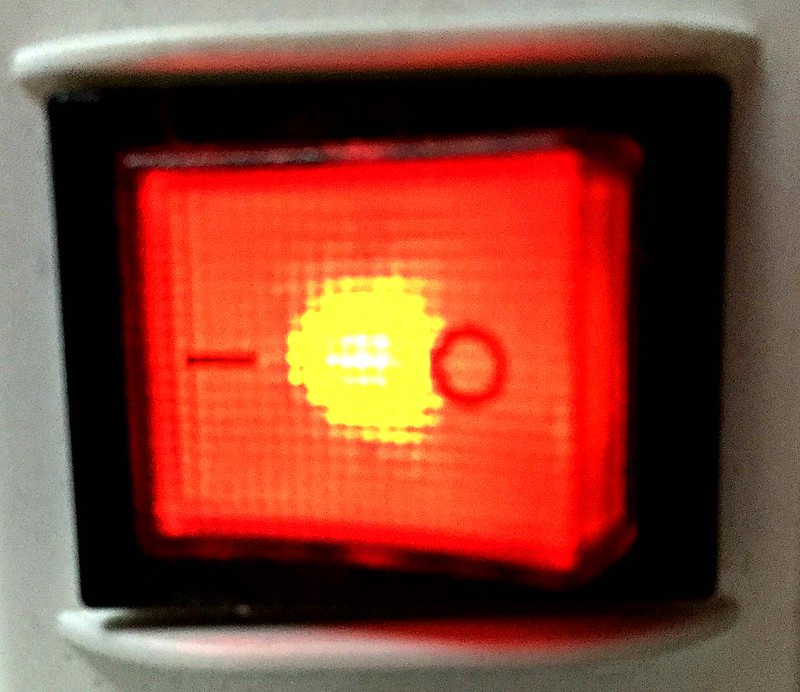 This is the close up of the switch on my electric rail for the various plugs I have when working with the computer. I have my Kindle uploader plugged in, my Apple computer uploader and a spare for my iPad or iPhone when needed. I am now working on my Microsoft computer, so that is also plugged in. This is outrageous enough to qualify.

And now I have discovered I have a big problem with this challenge.I did it all last year, almost every day, and now we have the same colours, naurally. To avoid bringing the same photos again, I have decided to take a photo of the day of the colour necessary and I am hoping I find one somewhere. Yesterday there was a melon colour in the bathroom cupboard, and today a switch colour on my desk. Amazing how versatile I can be for a golden oldie. 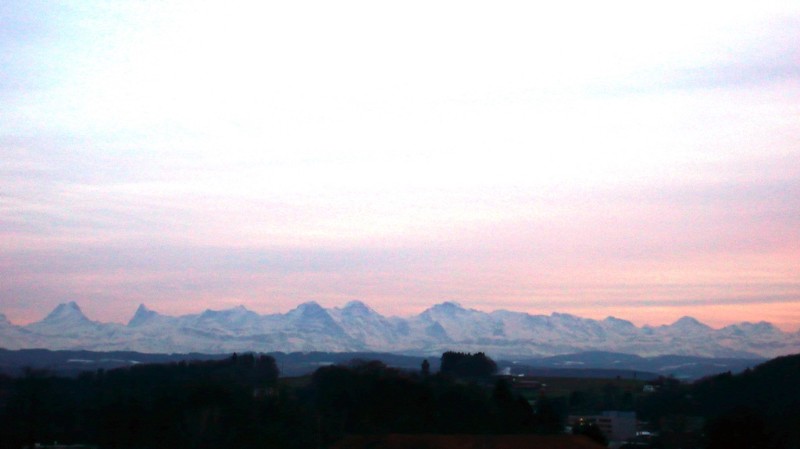 The thing with the alps in Switzerland is that they are everywhere. I mean they are not at the bottom of the garden, it would take a couple of hours to reach them from where I live, although I took this photo from my village. They do seem to go into infinity, and when you have finished with the Bernese Alps, as in the photo, then go a little further East in Switzerland and you arrive at the area known as Graubünden where there are another bunch of alps, although I do not know that area so well. I am situated more in the middle of Switzerland with the Jura mountains in my back, which are not as majestic as the alps, but do their best.

Climbing the alps is something for the professional climbers. They usually carry ropes, have special shoes, and pick axes to help haul themselves up, although I have never done it myself. I know a few people that have actually climbed the Eiger and survived, but they were in an organised group: it is not the sort of thing you do as a Sunday walk. It has to be planned. The idea is to embark on the journey some time in the afternoon and arrive at a mountain chalet, perched on a ledge a third of the way up the alp. You then get a nice warm evening meal, probably something with soup, cheese and dried meat specialities of the area and then everyone goes to bed, in the same room. Yes, there are no private rooms, it is a large room with matresses on the floor. I have never actually done it myself, but see the films and hear the experiences of those that survive.

Some time in the early morning hours, before sunrise of course (all good mountaineers go before the sun rises) you assemble your gear and leave the hut for the climb. I think the idea is that in the morning it is still cold and frozen and makes for a safer journey. And so you being to walk upwards, using your equipment to help you on the way. You are hoping that the guy in front of you is treading carefully, as being hit by falling stones and rocks is not so good. Eventually you arrive at the peak or on a ridge and take photos. There might even be a plaque somewhere telling you how high it all is, and perhaps a few memorials to those that made it up but not down. And then you begin the descent. No-one ever seems to write about the descent, so I suppose it must be quite easy, although I always had bigger problems going down than up (not mountains, just slopes).

We would spend summer holidays in the alps, usually in a nice safe village like Grindelwald or Adelboden, and take photos of the heights. Now and again we would look through binoculars. We might have walked a few mountain paths, but our insurance probably did not cover falling from the Eiger or the Jungfrau. Of course you can do it the easy way and take a train up to the Jungfrau, or a lift to the top, which I have done.

There are infinite possiblities to climb mountains in Switzerland, but there are also infinite possiblites to take photos, which is more my sort of thing. Our hospitals in these regions are also specialised for broken limbs and there is a helicopter rescue team. 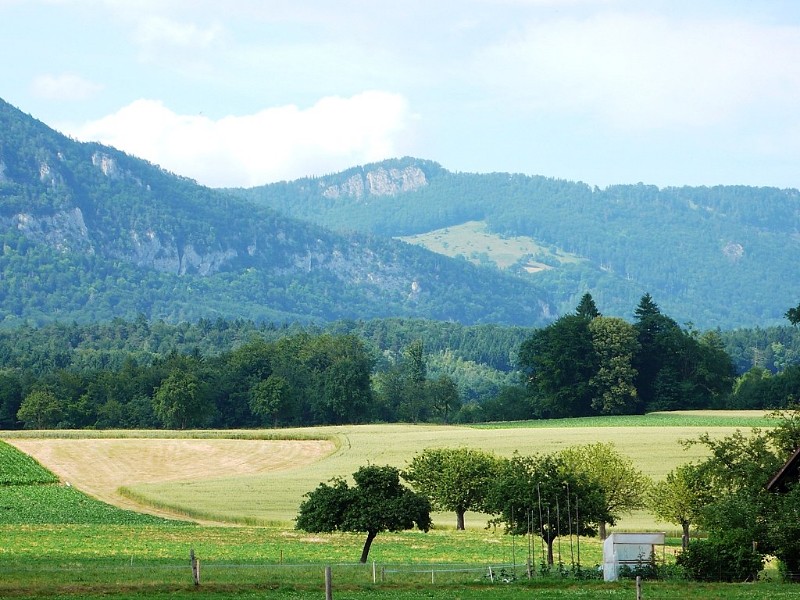 This is the first mountain chain of the Jura mountains, our village laying at their foot. There are seven chains in all, reaching to the town of Basel on the borders of Switzerland. You could walk it in a straight line if you took the roads in between, otherwise it sould mean walking up and down over seven mountain ridges to complete the journey. It is more my sort of thing, as these mountains are rarely above the tree line, and have nice forests in between with safe paths to follow. I have been for many walks in the Jura. They stretch across the top part of Switzerland from Geneva towards the East of Switzerland, but are also in France. I am no expert, but you will find all you need in good old Wikipedia.

And now I have finished yet another infinite daily prompt subject – everything seems to be infinite at the moment. 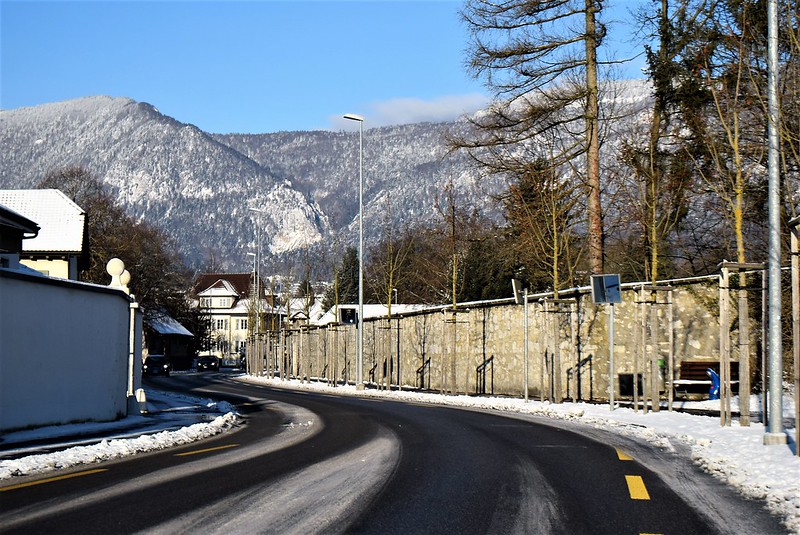 The local landscape is changing with its new Winter clothes. I too this photo on Friday on the way to the supermarket. The first chain of the Jura mountains are now completely covered in snow, although living in the lower lands, we have not got as much as other places. The ski resorts are now glad that there is enough snow to attract the tourists, as they live from the snow during the Winter.

I decided to take a few photos of the birds this morning, eating their breakfast outside, but somehow they do not have such an appeitite when it snows. They are avoiding the bird house full up with seeds, which the usually empty within an hour. They are more into the fat food we spread on the ground:  I suppose they do know what is good for them. Of course chief crow and a few magpies have already cleared the table with the bread remainders. We are getting a regular visit from a robin lately. Today I managed a photo, but probably not such a good one.

I am not really a snow lover, but it is week-end and I do not have to go anywhere, so I am enjoying the scenery from inside. I used to hate the stuff when I was a working woman, but now I prefer it to the summer weather. Summer heat is no longer as pleasant as it used to be for me.

It is now time to begin preparations for lunch. Today will be veal ragout, and I like to start it in the earlier morning to let it cook slowly. The butcher apologised to me when I asked for some marrow bones to cook with it as they had forgotten to order and only had them packed to buy. Usually he gives me 3 as an extra. However, he had a calf’s foot free, so I took that, although we also bought a few marrow bones – they are not so expensive. They makes such a good extra to the sauce.  The butcher is a very nice guy and is always ready for a good conversation. You can buy meat already cut and packed in plastic, but I prefer to choose what I want over the counter where it it frshly cut: although I find the stew pieces too large for my taste, so I cut them smaller before cooking them.

And now I must go, there are things to do and photos to take in between. I have now set up my camera with the zoom lens to see if there are a few birds that want to have their photo taken.

Enjoy your Sunday, and if you have to work today, then make the most of it, tomorrow is Monday.