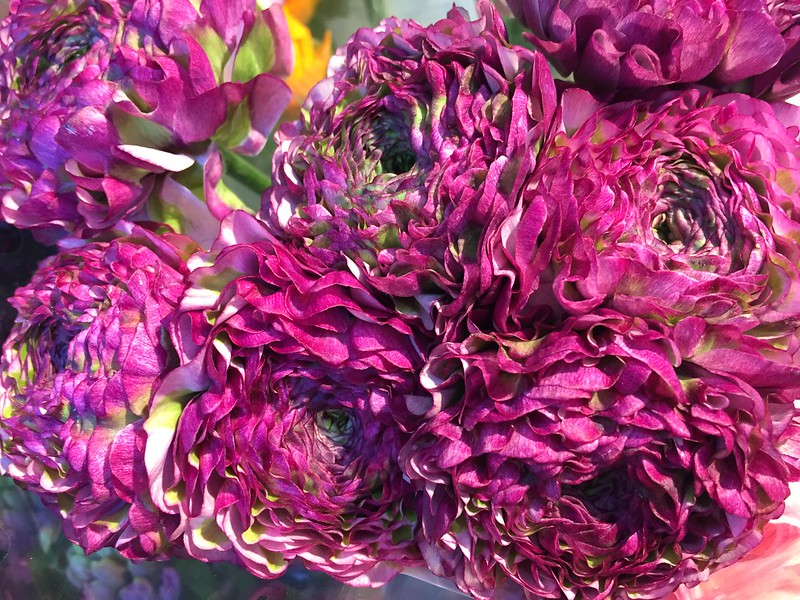 It is another one of those, but in a different colour and differnt texture. They have a few different samples at the moment in the store. I like them very much with their perfect shapes and colours. 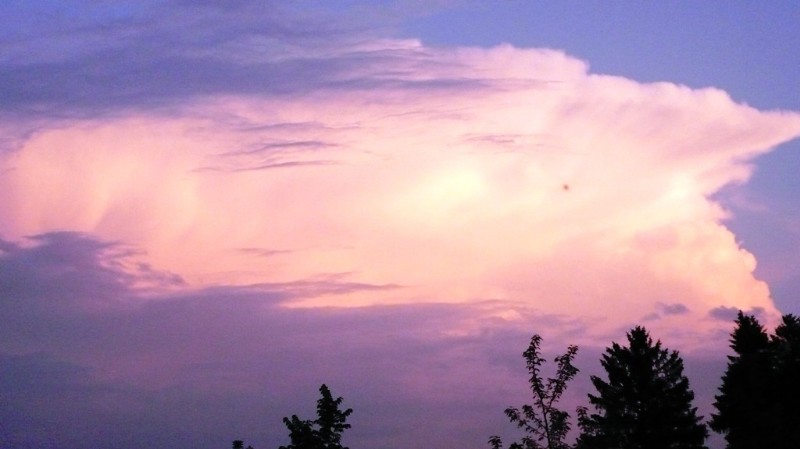 A melon sky, although does not really sound very poetical, but skies are not fussy. And then I went on a search for more melon and found something in the bathroom cupboard. 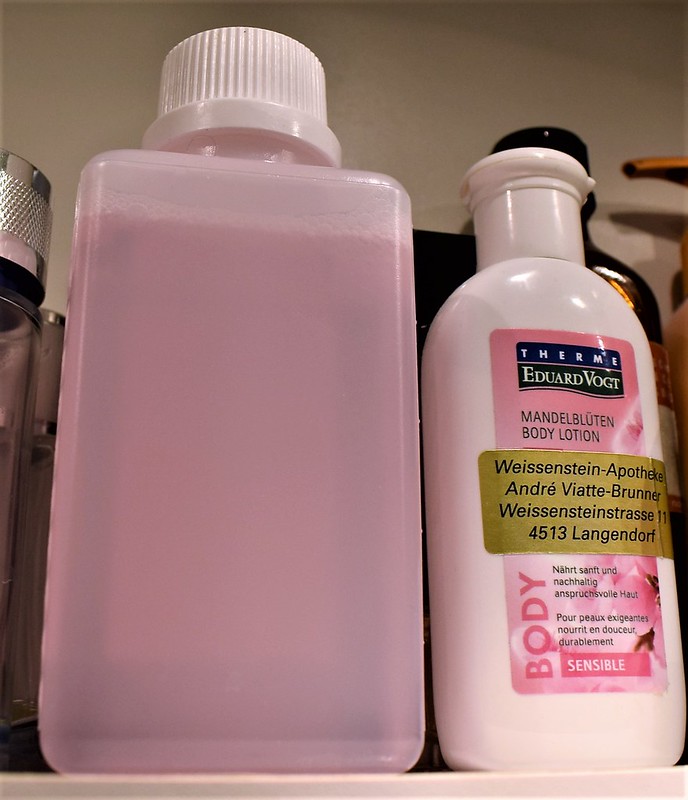 There was  some sort of coloured liquid for use after cleaning your teeth.I kept the almond body lotion in the picture as well, as it has a few melon similar colours. 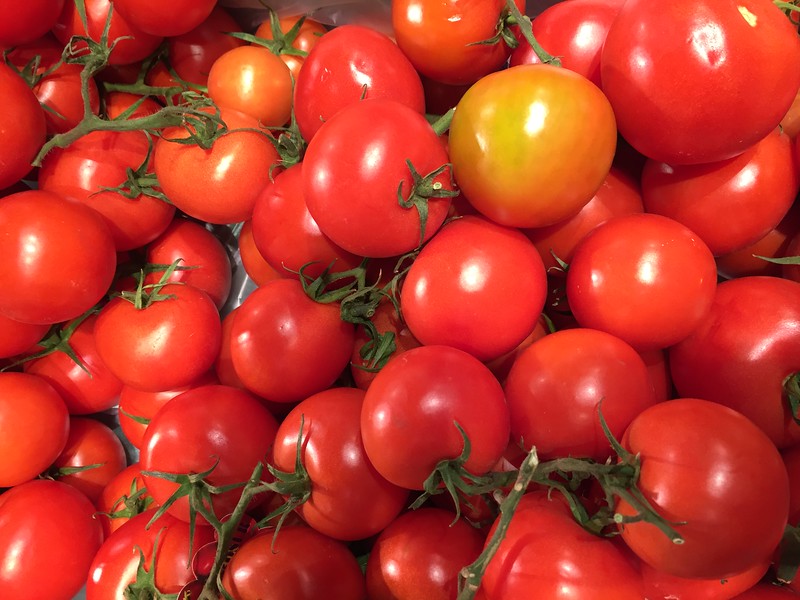 “You wrote tomatoes on the shopping list, so I brought tomatoes.”

“But not mini tomatoes, the size of a pea. How am I supposed to bake them? I need real tomatoes, the normal sized ones, the tomatoes I can cut in two halves, sprinkle with salt and pepper and garnish with some sage and thyme. I would need a microscipe to disect those dwarf tomatoes you have brought. me.”

“You should really be more specific with your shopping list. If you write “tomato” I bring tomato. You should have specified “normal tomatoes”, or perhaps the biggest tomatoes you can find.”

“No, because if I had written the biggest tomatoes you could find, you would have brought me those special hyrid tomatoes, the ones with the way lines in the flesh, and one would be enough to feed a family.I just wanted normal tomatoes, nothing fancy with frim frams on the side+

“The tomatoes I brought do not have frim frams on the side. They are plain and simple and have small green stalks where they were picked from the plant. And they were in a special offer. They were half the price of the normal sized tomatoes.Define “normal”.”

“I do not have to define “normal”, anyone knows what a normal tomato is, with an exception of you. Of course they were half price, because no-one wants tiny tomatoes. They are tasteless and not very fresh. They are going soft already. It is only the tomatoes on the top of the packet that are fresh and firm. Underneath they are soft and useless.”

“I thought I would be saving money, you are always on the look-out for bargains.”

“But not with tomatoes. Tomatoes must be firm, tasty, fresh and a good sensible size: not the refuse left on the compost heap that the farmer could not sell. And they are not local produce, but imported. They were probably already disintegrating on the transport.”

“Ok, the next time you want me to bring tomatoes, then state “fresh, local, medium sized tomatoes” and I will bring you what you specifically required. All you wrote down was 1 Kilo of tomatoes and so that is what I brought. You can be so unspecific sometimes. It is the last time I will bring anything, you can go yourself the next time.”

“Typical, I am sure you brought the wrong tomatoes on purpose, because you did not really want to do the shopping. What about the potatotoes, where are they?”

“Of course they are, I wrote them down yesterday.”

“Do you need potatoes?”

“That is not the point, and perhaps it is just as well that you did not bring any: judging by the state of the tomatoes, you would probably have brought the wrong potatoes.”

“Potatoes are potatoes and tomatoes are tomatoes.*

“Exactly, typical. There are large sized normal tomatoes which you did not buy, because you preferred to bring the exotic squashy miniature tomatoes. Just as well that you did not bring potatoes. You would have probably just taken the next plastic bag full.”

“Of course, potatoes are packed in plastic bags.”

“Not the ones I like, I prefer the potatoes in the open boxes in the store. Then you can choose exactly the size you need and know they are perfect in shape.”

“It is a good job I did not have to bring any eggs.”

“Because I would now be throwing them at you.” 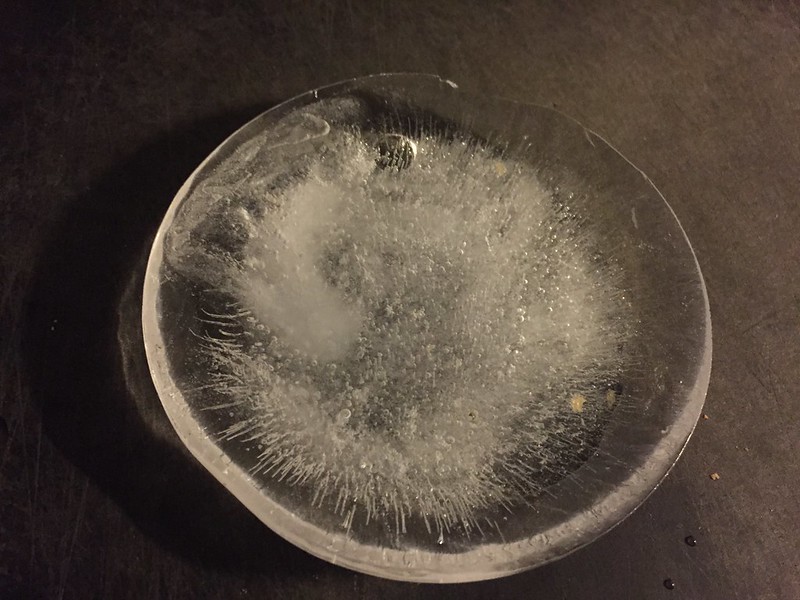 A late good morning, but I hugged my bed as it was warm and comfortable and sleep decided to fold its tentacles around me and infiltrate my body. I was a victim, but a happy victim. With reluctance I severed myself from its bonds and rose. I arrived in the kitchen to find an ice sculpture in the sink. Mr. Swiss informed me that temperatures were -10°C outside and this was the frozen water from the bowl outside that we leave for any wandering animals across our porch during the night, inclusive Tabby our feline. Tabby also has water inside, so she did not bother with the outside water. I think she is allergic to cold, snow and ice. I decided to preserve our ice age by taking a photo.

We distributed the usual morning goodies for the birds and this time they did not need a second invitation, they did not even quarrel. There was not time to spare. The chief crow arrived with his wife and stuffed their beaks and the magpies were also making the most of the feast, at a safe distance. No-one goes near the chief crow, he is now the biggest bird here. He no longer hops around, but it is more a waddle.

My next stop was to see how my amaryllis was developing. 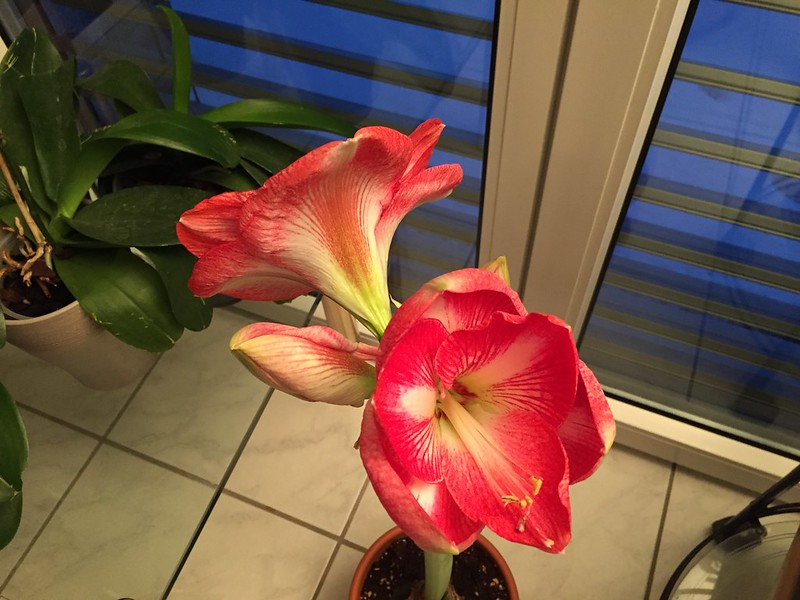 The second flower has now opened, and there are still two to go. 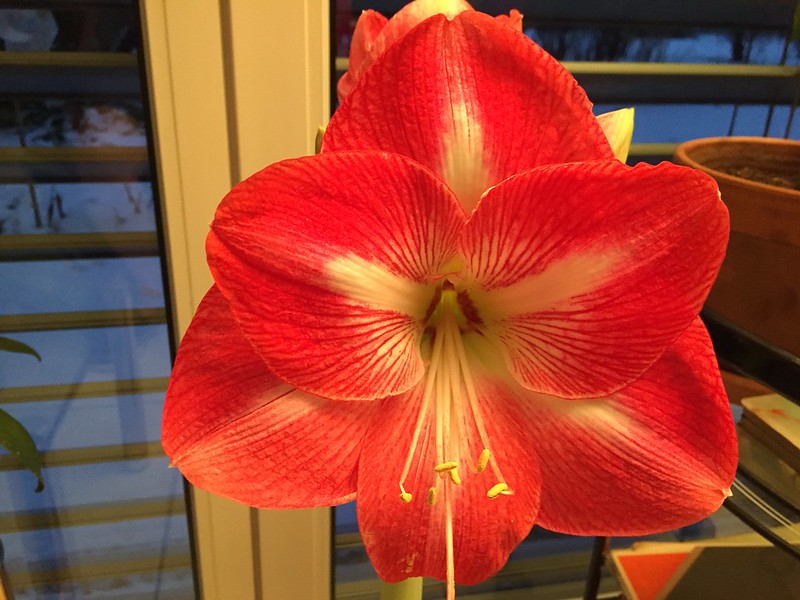 Leaving the amaryllis to recover from the strenuous night of producing flowers, I will now enter my recovery process. Actually I planned a nice restful day today – it just happened. Yesterday evening I was alone again at home. Mr. Swiss made his way to his rehearsal room and the other members of his golden oldie jazz be-bop group met for a session. One arrived on the train from Italy ten minutes before the session (that is dedication to jazz) and the others were in the area. As it will be the last rehearsal session for a month they were all ready to go.

I spent some time on my computer session, blogging and uploading photos – what else does a golden oldie have to do? I actually intended to catch up on some reading, but then discovered a few things that needed ironing and decided to perform the weekly orchid water donation session instead of Saturday morning. This all whilst the computer was gradually closing down for the evening. Yes the stress of a golden oldie life is endless. Eventually my orchids had their weekly bath, and were back on the shelf. The ironing was put away in the cupboard and I stretched out on my stressless comfortable chair with my Kindle. My iPad and iPhone were on the table next to me – life was perfect.

And then it happened. I hear a distant noise of the entrance door to the parking lots in the cellar – there were footsteps and a key turned in the door. Even golden oldie jazz drummers no  longer stay out so late in the evening, and I was no longer alone at home, Mr. Swiss returned. It was finished with Kindle reading as we were now watching further instalments of Scott and Bailey, our favourite english detective series of the moment on DVD.  I was, of course,  glad that Mr.Swiss managed to brave his way driving over ice and snow to returnsafely.

Today I will not go anywhere  for anything. I will be the domesticated cyber housewife, tending to the needs of the family and the computer.

Enjy the day everyone – I will be back when the computer calls.