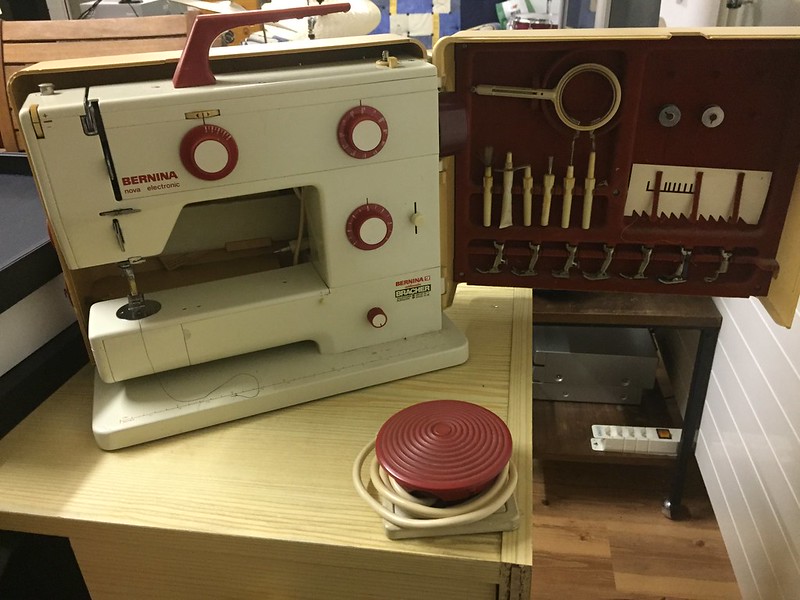 I had to pay a visit to our hobby room in the celler before I began to write. The photo is the reason why. Many years ago, I was about 35 years old, perhaps a few years younger. my mother-in-law gave me an old sewing machine. It was an antique almost, altough not a valuable antique, and it was a mechnical machine, not eletric. My mother-in-law was clearning some stuff out, and as she had her own electirc machine she decided she no longer needed it.

I was then mother of 4 childres, two step and two of my own and although I quite liked to knit, sewing was more a necessity than anything else. And so I began to use this old machine. It was all I had,  did not have an electric driven pedal, but was operated with a lever at the side moved by the knee, if you can imagine it. Why sew, basically to save money. Clothing 4 kids and myself was not cheap, so I decided to try it myself. My first efforts were not so good, were almost useless  and then I signed up for an eight week sewing course, which developed into a 20 year course. We were about 8-10 women that met once a week in the local evening school. The lady in charge was a qualified local dress maker and she was good. She had patience, took time to show us the ropes with the result that I made my own clothes for 20 years and many trousers for the kids. I made blouses, trousers, costumes, evening wear and my pride was a dark blue cashmere coat. We bought a pattern, and the material and would begin to sew. Sometimes a pattern was not necessary. Our “teacher” would ask what we wanted and she would help us to make our own patterns.

Why go to all this trouble? I was wearing clothing that atually fitted my strangely formed body. I realised that my waist was about 2 cm higher at the front than the back. I was too tall for the customs clothing lengths, and sleeves according to a shop size, were always too short for my arms. I could also put a lining into everything I made if ncecssary. And so I became bespoke, and the kids always had enough to wear. We had a local factory that produced material, and I could buy lengths of material at a reasonable price.

As you can see from the photo, with time I progressed from my second hand mechanical machine to a so-called Bernina (Swiss make) machine in a swing box. This machine is still in perfect  condition after so many years. It was very useful as the box was attached and I could easily stow it away after the work. I once had it revised, but now only use it for emergencies. Buying trouseers and tops is no longer a problem for my size. I am now in the golden oldie oversizes and now nothing has a real shape: it is all straght down and wide enough, with assistance from elastic fibres.

The word bespoke was not a mystery to me. I was reminded of the short film “The Bespoke Overcoat” which brought back a memory from 1955, based on a book from Nicolai Gogol

“Fender is a lowly clerk in the warehouse of clothing manufacturers Ranting and Co. His one ambition is to have an overcoat of his own. Refused one by the cold hearted Ranting he asks a tailor friend, Morry, to make him one instead, but dies of cold before he can take delivery of it. Unwilling to give up his only desire even in death, he returns as a ghost to persuade Morry to steal him the overcoat he so coveted in life.”

I would love to see this film again, as now I am older and would have more understading. I grew up in an area of London, the East End, where jewish tailor shops were a main feature of the East End. We had a large immigrant jewish population skilled in tailoring. The two main roles in the film were played by two actors from the East End. David Kossoff, who came from Hackney, a neighbouring area, and Alfie Bass who was from Bethnal Green and lived only a few streets away from where I grew up.

I was also influenced slightly by my dad. He worked in the tailoring trade as a shop salesman, in the “50 bob tailors” which wa a shop where you could buy a suit for 50 bob, bob being the slang word for a shilling at the time. Dad knew a lot about making men’s clothing and had a sharp eye for quality, although he was not a tailor, he just picked it up. And so much for “bespoke”, a word that has perhaps lost it meaning today, but a word that returned some old memories to a golden oldie like me.