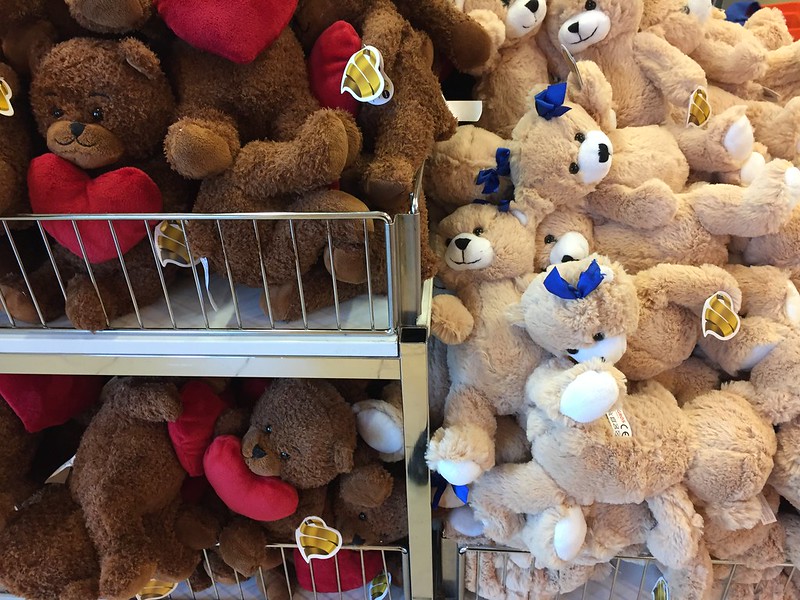 They arrived some time in the middle of the night. They had fled and had no time to take anything with them. They were unwanted, and had no place to go. They used to be so loved, so popular. Christmas was the best time of the year. Then they were love, adopted by families with children that took care of them. They had won a place in the hearts of those that were longing for them.

The new invaders were removing them one by one. The teddy bears were in the way, they could not think for themselves, the new conquerers could think. They were computers, armed with mechanical thoughts. They had their own methods of replacing the teddy bear, luring the children with their games and puzzles.  The teddy bears had no defence, they had no-one to help them. Even those that said they would help them against he opressors were not telling the truth. Their only interest was to move in and take over the space left by the teddy bears. It was becoming a war of the strongest, computer against computer. First of all the teddy bears were under attack from their own people  and now from another country pretending to want to help, but there was no longer help. Computers did not have feelings, only weapons.

Teddy bears were a kind race, all they wanted was to be loved. Chrismas was approaching and they decided there was only one way and that was to flee: to leave behind their secure and happy life and find somewhere where they would again be loved and accepted. They packed their little hearts that they had kept for the Chrismas presents for the children and in the darkness of night they began to march. Their feet grew weary, some were even lost on the way, they did not know which way to go, until one of them saw the lights of the town. They marched towards the lights with hope in their teddy bear hearts.

The town people were astonished. How can anyone not want a teddy bear for Christmas. The teddy bears were not given to eat or to drink, because they did not live on food and drink. they lived on love, the love of the children. The children saw the weary teddy bears when they arrived. They hugged them, kept them warm and took them into their hearts. The Teddy Bears  had found a new home. The town that knew no oppression from other countries, or even their own people, could not understand why no-one wanted a teddy bear.

There were so many teddy bears, but room was found for all. Those that were not adopted were placed in a teddy bear adoption centre. It was decided that after Christmas they would be given to the children that were in hospitals and homes and children without any family of their own, children that had also been forced to flee from their own country. The teddy bears were now happy, they had found a new place to stay, no more war and no more love hunger.

Is there a moral to this story? Perhaps it is not a story, who knows.

One thought on “Daily Prompt: Escape”