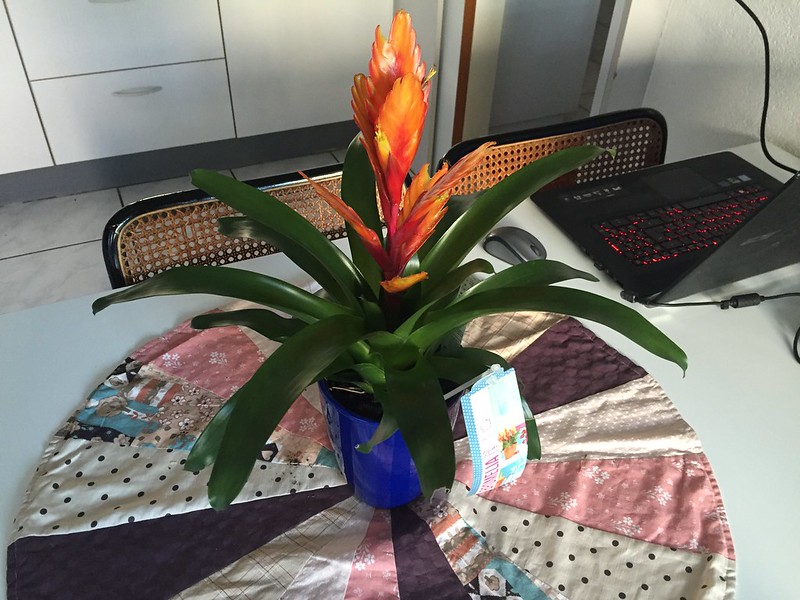 In the beginning there was a nomal every day bromelia. We always had an orchid on the kitchen table. They were reasonable in price, did not need intensive care, just a weekly bath and they were happy. Why buy expensive cut flowers, bouquets, when your new orchid every 2-3 months suffices. One day Mr. Swiss and I, to be quite honest it was Mr. Swiss,  decided “let’s do something completely different”. The last orchid cast away its last flower and it was time for a new thing on the kitchen table. We visited the local store and had a very detailed conversation on the new choice, but eventually decided on a bromelia – that is, Mr. Swiss decided on a bromelia and I agreed.

It was something completely different and I soon discovered very  low mantenance. Just fill it up with water at the beginnings of the leaves, no need for pouring it into the earth in the pot. What could be better? And so our bromelia sat on the kitchen table looking good and developing. I noticed some strange yellow appearances between the orange leaves and assumed this is how a bromelia produces flowers within flowers. 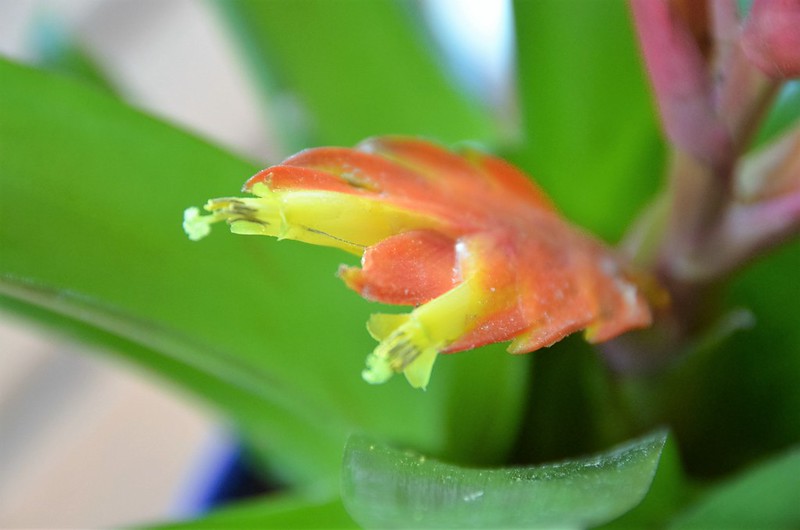 I took some close-ups of these strange new growths between the orange leaves at the center of the plant.Were they breathing?  It was my first bromelia and I was slowly learning all about it. As time passed these wonderful fresh looking flower lookalikes became brown, but they were still the center of attraction. A passing grasshopper decided to hop over and make a closer examination. It was now summer and the bromelia had been shifted outside to the deck/patio/porch or whatever you call it. 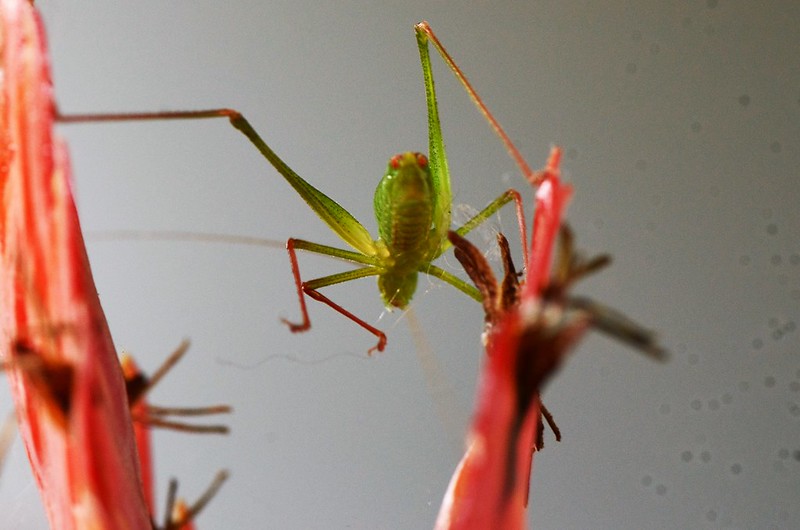 The grasshopper found my bromelia to be an ideal exercising place and tried all sorts of stretching exercises for his legs. As my broelia made no attempt to devour it, I decided to just let him enjoy it. 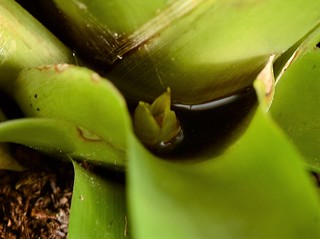 As time passed I discovered a new mystical development on my bromelia. I was still giving its weekly drink of water at the base of the leaves, when I realised that my bromelia had given birth to a baby. There was no big fuss, it did not seem to have birthing pains. My bromelia was pregnant and said nothing and one day new life was growng. As it was my first bromelia I had no idea of these mystical developments. I had become a bromelia godmother and not realised it. 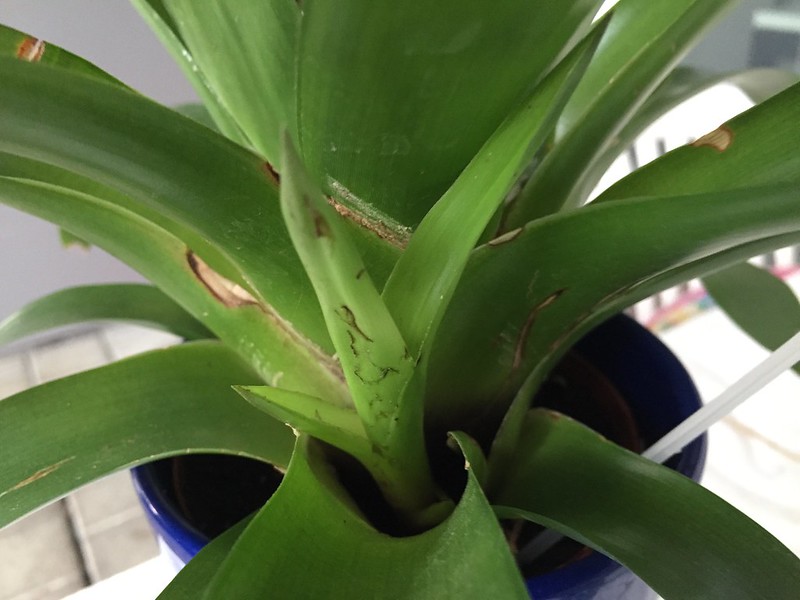 I took this photo just a few minutes ago. The baby is growing, it is triplets. I have three of these new growths between the base leaves of my bromelia. I have discovered bromelias have an interesting secret life. Are they perhaps a relation of the Triffid?. I have the flame thrower ready for any complications (thanks for the tip Marilyn, my blogging buddy). I am not so sure about this bromelia, is it magical, mystical or just malicious Yesterday I discovered a new development. The original orange coloured centre has now dehydrated, become an uninteresting beige-grey  and more or less dried-up. Having an interest in unexplained apparitions I was keeping a close eye on new developments and have discovered that even dried up, dehydrated, centre pieces still have life in them. 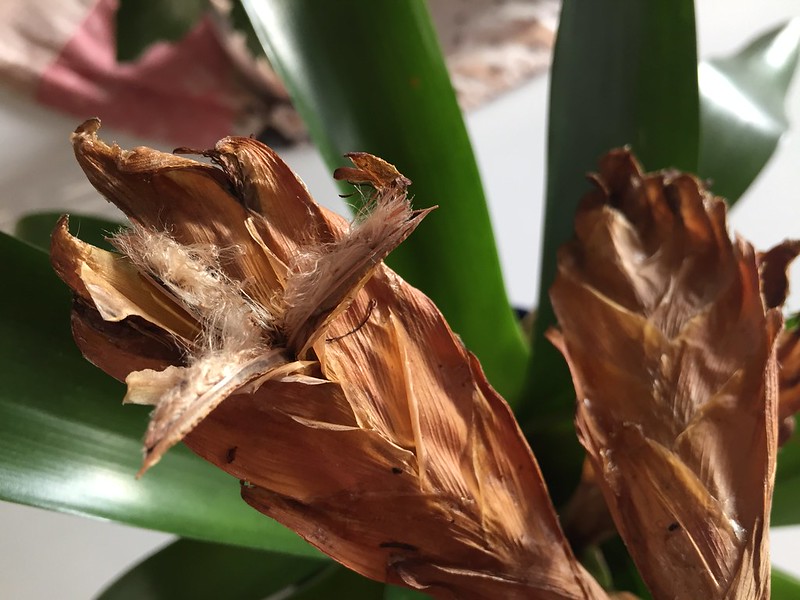 One of the dried-up pods in the middle has burst open: silently I would add, no explosion. It seems to be growing a fur lining, is it perhaps a triffid all the same? I am keeping an eye on this bromelia. In the meanwhile it is again living on the kitchen table. It was in the living room but I noticed my cat, Tabby, would make a large circle around it and now and again would growl and hiss as she was passing by.

I have decided to keep this bromelia, curiosity killed the cat (as Tabby seems to think) and so I will keep it under observation. Come to think of it, orchids are much more well-behaved with no unexpected surprises and the flowers just drop off when they are finished. Bromelia flowers seem to experience a metamorphosis. Perhaps it is a genetic variation of a mandrake.  I will keep you posted.