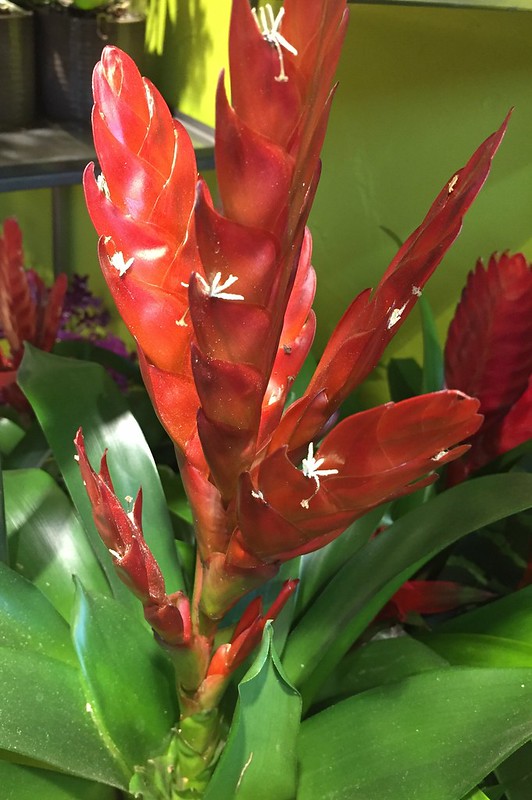 I had to take a photo of this bromelia in the store. I found it interesting how the little flowers were appearing between the “petals” of the plant. I have a bromelia at home since more than half a year and have watched its progress carefully. The little flowers appear and remain for some time. A few months later new shoots appear between the leaves. Eventually the red part dries up and so do the flowers. I now have three new stalks with leaves appearing and as the center part dries out completely, it springs open to show some seeds. 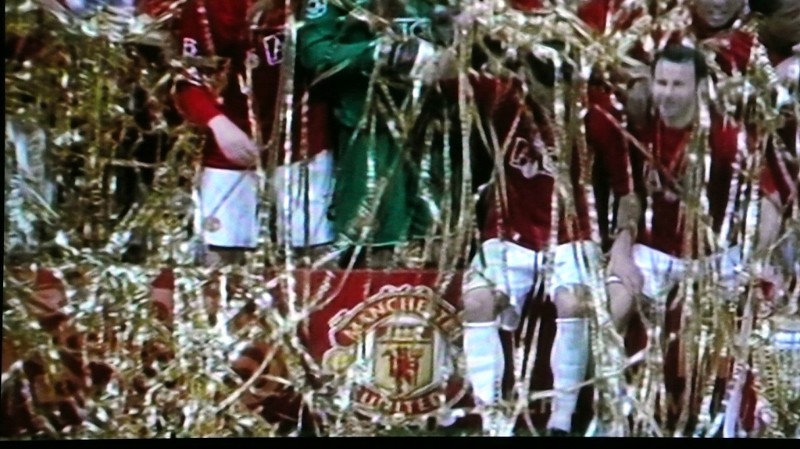 If I hear tht word “abide” I think of football, the one played wih the round ball. I took the photo from the TV. It was the UEFA Cup Final, the ending when Manchester United beat Chelsea 6:5 in 2008 and my favourite goalie of the day, Erwin van der Saar was playing for Manchester: one of the reasons I took a few photos.

So what does all this have to do with “Abide”. Once a year the British have a cup final and as most things British, it is anchored in tradition. If you are lucky the Queen will be there in person, or Prince Philip. to give the medals afterwards. There is usally some member of the Royals that has to sit through 90 minutes of a football match, even if they would prefer polo, but now and again they have to put up a brave face.

Before the British cup final begins they do the national anthem and all that, and everyone sings the hymn “Abide with me”. It seems over the past years, they now have a well known singer leading the crowds, but to my time it was just the spectators that sang along, accompanied by a brass band. It is custom. After this the referee blows the whistle and the game begins. That is all I really have to say about “abide”.

What I do remember is that in our little street of houses we were one of the first families to have a TV. Imagine, there were days when no-one had a TV. It was no big deal, everyhing in Black and white and a small screen. In May the FC Cup final would be transmitted live, during the afternoon. Mum and I would disappear to go shopping leaving dad together with 2 or 3 male neighbours  watching the TV  at our place. It became custom. In the East End of London visiting neighbours in their home was not really the done thing. “An Englishman’s home is his castle” and all that, and it remained your own kingdom but the english cup final it became an open house. At last the football supporters could actually watch the game on the TV and not only listen to it on the radio.

Neighbour’s husbands, who you rarely otherwise saw because we were all working class, would suddenly be seated around our small television and excitement would reign. I believe a glass or two of beer was also offered as refreshment. They abided with us until the match was finished.

I was then a kid, it must have been in the fifties. Dad was still watching the cup final at the age of 100 in his care home, such are the traditions continued throughout the years. I have a memory of our team, West Ham United, winning the cup in 1964. They did not often win it, so it was a memorable occasion. If only the digital camera had existed in those days.

I was a football fan and when dad said that on Sunday morning, the day after the winning match, the West Ham team would be driving through the streets of East London on a coach, showing the cup, and whether I wanted to go with him, I was there.  We were off, me proudly wearing my West Ham United scarf, and joined the throngs of people and yes I saw the late Bobby Moore, the captain of the team,  holding the cup as the coach passed by. Afterwards the winning team stood on the town hall balony and we were cheering and clapping. I was 18 years old at the time. Dad grew up in Stratford, still had some old friends there, and so we made our way to the local pub afterwards where he had a reunion with his mates that he had not seen for many years. It was a never to be forgotten day fo me and I can still see the triumpful team in that coach holding up the FA cup.

Daily Prompt: Abide with Me 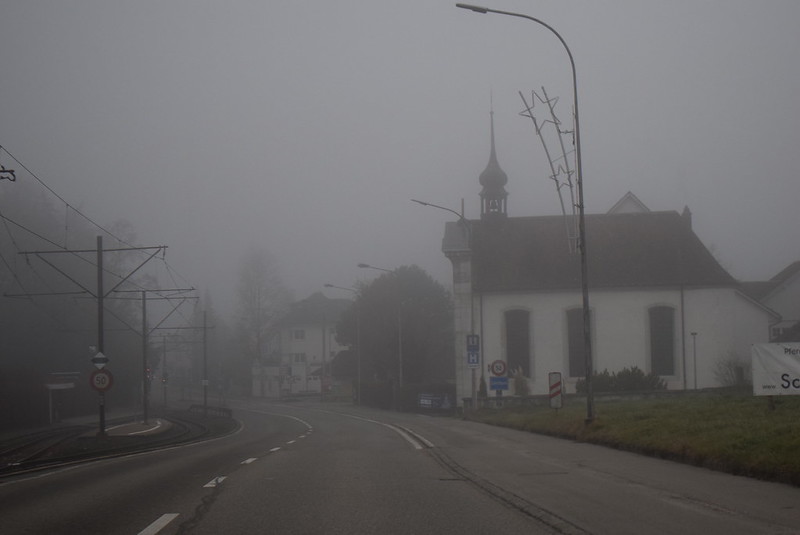 I do not really mind a bit of mist now and again, makes interesting photos, but slowly it weighs on your mood. As we leave our estate in the morning for a shopping trip, we turn left for the main road, and this is the first thing we see. A small local church, next to it is a home for senior citizens and ahead the main road to the next town where we branch off for a village where the supermarket is. On the left is the railway line, but all of it is shrouded in mist. It is not just because of the river, but because of our normal weather conditions at this time of the year. The mist is just there and is not going anywhere. Not even snow is brave enough to show its face.

So enough of the poetical moments of the day, I have other things to do. No, I am a golden oldie and do not have to do anything, it is all my free choice, but even the free choice seems to have limits.  After cutting the old bread for the birds, I now have a kitchen with bread crumbs on the floor, so that will be a task to remove them. I also have a few windows to clean: no big job because I always seem to be cleaning them, but I cannot rest until they have been refreshed. Luckily Mr. Swiss is already occupied with the living room, and I now just do the bits on the side.

I will not be going anywhere today, Mr. Swiss will make a Saturday morning trip to ensure that we do not go hungry, although the fridge is full of our trophies from yesterday. No. 1 son is away today for lunch and dinner. He has some sort of rock concert he will be visiting and so we are a honeymoon couple again, not quite. At our age, we have been there and done it all and are glad to not to have to go places and see things.

And now I must go and get started. Just sitting at a computer and bemoaning my boring life does not bring results, it is time for action. I will drag my aching bones with the support of the vacuum cleaner around the appartment, put a brave face on it and look forward to this afternoon when it has all been completed and can return to my computer, or book. I could also do some chess training. I have beat the computer three times. I am really no expert, and play only the first steps, with suggestions from the computer what to move and where

I would so much like to play against a real online human, the computer invites me all the time, but I do not have the courage. Mr. Swiss says he knows how to play, but does not want to play. I told him I would like to get a chess set and he said we have a miniature set somewhere. I was thinking more on the lines of ebony and ivory like the song, something to hold and not just push around with little pegs to hold it in place. I am still working on it, but he is not interested. My problem is my first steps were self taught when I was a teenager and I do not have the courage to play against real people. I would either annoy them or be the joke of the day.

And now I must really go, it is action time at Villa Angloswiss – enjoy the day, the week-end, or whatever