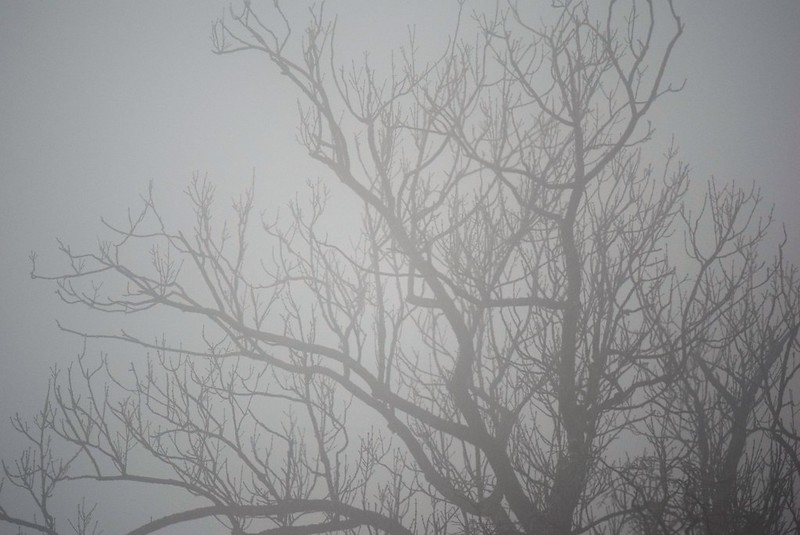 All the landscape needs is some mist, fog, or whatever, and things vanish. When I was a kid in the fifties things vanished in London quite easily in the Winter. We had something called “smog”, a extra development of fog. It was not the romantic mist that transferred the background to a magical mystery effect, it was a poisonous think fog full of soot particles from the coal burning factories, causing many to suffer with lung and breathing  problems. I survived even though we were also burning coal in our fire at home. Day after day I would find the way to school. I lived in London town, and the school was a 10 miniute walking journey. I almost neeed a knife to cut through the smog on the way. The smog remained, it did not vanish, because the daily workforce had continued to produce the smoke from the chimneys. Even the fish had disappeared from the River Thames in the meanwhile, coughing on the way.

I remember arriving at school coughing and spluttering and finding the residue in my handkerchief after a few nose blowing exercises. The hanky had spots of black on the white material, traces of what you were getting into your lungs. I was reminded of this today, after reading my morning blog from The Gad about Town even showing a photo of one of our London local busses, the No. 6, which was the bus for Hackney. The world still has a lot to learn from this, as other countries, particularly China, are still suffering from this syndrome. Progress seems to have an unhealthy price to pay. On the other hand nuclear power is cleaner, but more life threatening.

In the meanwhile I enjoy our local misty scenery: not caused by factories, but by the local river: harmless and with a very picturesque angle to it.

Mr. Swiss is vey good at vanishing, especially when I decide to attack our appartment with various cleaning appliances. He finds he would be in my way. I tell him this is not the case, but he likes to click his fingers and disappear and who am I to spoil his vanishing trick. I also vanish from time to time, usually in the washing room and sometimes in my blogging headquarters where I am at the moment.

I noticed in Italy they have had presendential voting and the president is now  the ex-president and will probably also be performing the vanishing trick. Mr. Swiss said I should avoid talking politics, because I never really read newspapers or watch the news on the TV so might be wrong.  However, now and again I get some interesing snippets, like some carrot head became president of a big country, who did not really want the job basically. It was all a stupid accident it seems. He probably filled out the form wrong and signed on the wrong line. The new president of Italy may become a guy called Beppe Grillo, a well-known Italian comedian, so it looks like he is a good candidate for the job and brings everything with him that would be necessary (if he wins, of course). It seems to be trendsetting that comedians have the talent for such important political work.

My daily words have now been written, so I will move on. I have other things to do. By the way did I mention I will be 70 years old tomorrow – just saying 🙂