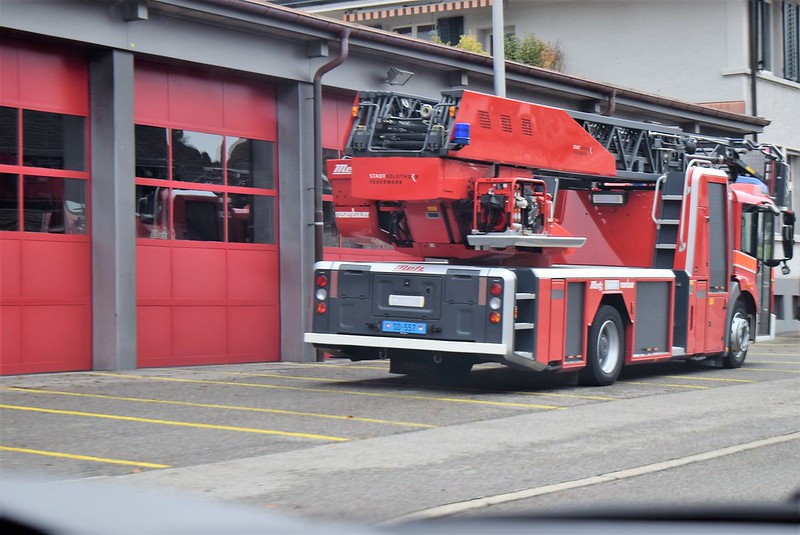 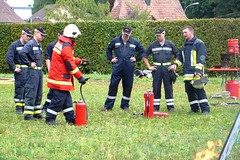 Look, the Swiss have a fire brigade, of course they do. Someone has to put out the fire. We pass the fire station on the way to the supermarket. Now and again you see a fire engine parked outside. In our Kanton we do not have a full time fire force ready to go into burning buildings daily, it is a sort of part time thing. As no-one in our family belongs, I am not quite sure how it works, but they always seem to arrive when something is burning. I once heard that the men that do not qualify for army service are sort of forced to join, although even here they are scrutinised. It is no good having a fireman allergic to smoke. The only contact I have had with this group is helping out at the local fire exercises as a first aid person. As you can see our firemen have neat uniforms and are watching intently as the chief is demonstrating how to extinguish a fire, at least I think so.

Why is it that I am being constantly reminded of the new American President lately? Flames – well not everyone can boast to have them growing out of their head, although it seems to me that they are no longer as intensive as they were. I got “or” and “second thoughts” this week as a prompt, is someone trying to tell me something. Anyhow I could not vote, and the Swiss TV political programmes now have something to discuss and the two reporters we could afford to send over the Pond to report the live action, at last got out of the studio.

This morning I made a chicken pie, and no, I did not set the kitchen on fire. 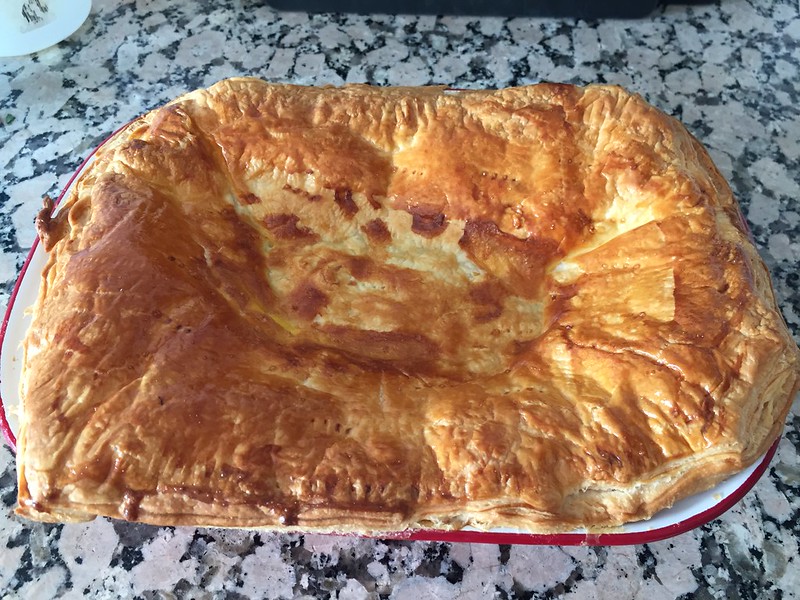 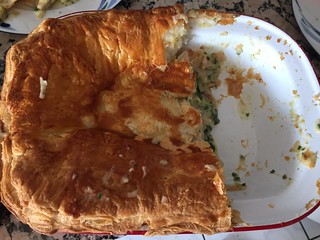 Above is the finished product as I removed it from the oven and on the left you can see the internal contents. Of course everyone was happy, I was praised for its delicious flavours and it was decided I could do a repeat performance.

My thoughts were travelling in a different direction. My usual Saturday morning of relaxed planning and dealing with things calmly seemed to have disappeared. I do not mind cooking, it is a sort of pastime on the side, but not a commitment to prove how good I am. It began easy with cutting the chicken breast into small pieces and preparing the mushrooms, by peeling them and cutting them into quarters. This small overture was easy. I afterwards fried them in the pan, still no emergency.

I read further about chopping the oinions and garlic and frying this in second pan before mixing it with the ingredients of the first pan. I already had two used pans, I am generally a one-pan person, avoiding having too many pans to clean. And now the next part was preparing the sauce – a third pan: this was going in the stress direction. In the meanwhile I prepared my pie dish by annointing it with fat from the butter paper to save time. My kitchen surface was gradually overflowing with used pans and the chopped remains that escaped. This was the moment, 45 minutes after beginning, that I began to realise a pork chop with the trimmings would have been easier and quicker.

In the meanwhile I piled everything no longer used into the sink and all the pre fried ingredients were now mixed with the chicken, together with my white sauce made from butter, flour, chicken gravy and cream. I had also managed to add chopped parsley to the sauce according to the recipe for the english chicken pie according to an old english recipe, which was delivered with my 5 pie dishes.

A quick glance at the clock and I realised my 5-star chicken pie should now be in the oven. Luckily you can buy ready made flaky pastry and so I lined the pie dish, threw in the filling and covered the pie with a second sheet of pastry. Luckily my oven had already been switched on and so after coating the pastry with the egg my pie at last entered the oven. It was then I head the key in the door as Mr Swiss returned from his shopping trip. He said hello, looked into the kitchen and disappeared again, which was very advisable. In the meanwhile I began to clear up the remains of the battlefield.

At 12.15 we were all sitting at the table holding a post mortem on my creation. It was a unanimous verdict that I can cook that again. I am still thinking about it, I was not fire and flames for a repeat performance.