Today there were problems in the kitchen. I began be preparing the potoes for the Swiss Rösti dish. This is no big problem. Peeling the potatoes, grating them into strips and frying on both sides in the pan with some diced bacon to add a bit of “umph” or whatever. 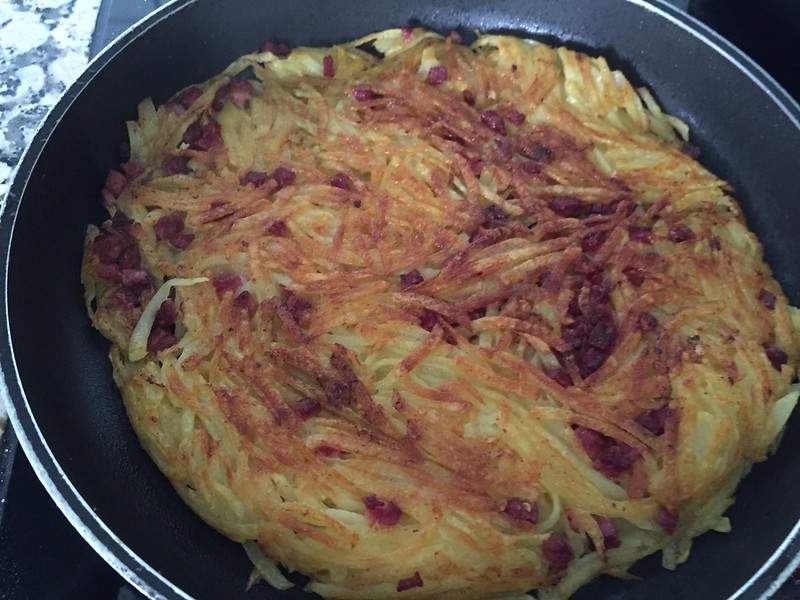 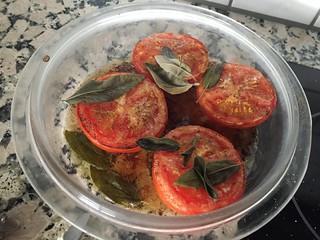 In the meanwhile I prepared the tomatoes. Also no problem, they allowed themselves to be cut in half, spiced with aromat and pepper, coated with butter and put into the oven. Although no, just a moment, one of the tomatoes called out.

“What about the fresh sage from the garden. You cannot put us in the oven without some fresh herbs, No respectable tomatato would allow this.”

“Yes, your tomatoes” and now they were all speaking in unison.

“What about the sage.”

Of course I went immediately to the garden and cut a spring of sage and distributed the leaves over the tomatoes.

“That’s better” and they snuggled down into the melting butter, they were now happy tomatoes.

It was soon time to turn the potato rösti in the pan, to let it brown equally on both sides. As I returned the rösti to the pan, brown side upwards, I could see it was now a happy rösti.

“About time too, we thought you had forgotten us. The tomatoes were getting all your attention. After all we are the center of your creation.”

“Oh stop showing off” said the tomatoes from the oven. “Rösti should be eaten and not heard. You would be a tasteless mass of potato were it not for the bacon.”

“Of course” answered the bacon “we add the flavour to the rösti.”

“If you really think you are so important, then perhaps you could distribute yourselves better between my potato pieces. Look, you are all bunching together in one place. That is not the perfect way to present my Rösti. I want you to spread equally. No-one likes eating me with all the bacon in one place. Distribute yourselves, you eat with the eyes as well as the mouth you know.”

“Stop acting so important rösti, at the end of the day we all arrive in the same place.”

“But we will be reborn again.”

“It is according to how you look at it. Anyhow let’s watch the eggs, they do not like being fried, and there might be a problem.”

Yes there was a problem. I melted the butter in the pan and broke the egg shells which was already a cause for a scream.”

“Who screamed?” I asked.

“Do not ask silly questions. There we were sitting comfortably in our shells, and suddenly we are cracked open and tumbled into a bath of hot fat. You would scream as well.”

“But I cannot eat you raw, I have to cook you.”

“You could perhaps do it with more feeling.” 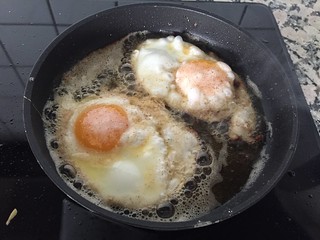 And then the egg launched an attack of hot butter which splashed on my skin.

“It was intended to hurt. If we have to go, we go fighting.  What are you doing with that spoon filled with hot butter.”

“I am covering your yoke with the butter to make sure it is cooked properly.”

“You could be more careful about it. Not just throw it on our yokes with a plop, but let the butter slide gently. Yes, that’s better.”

“But no more splashing and spitting.” I said and then there was silence. I took the plates, put the rösti on the plate, plopped the fried egg on the rösti and garnished each serving with two baked tomatoes, with their sage leaves of course. No vegetable or egg was really harmed by this blog, they were only showing off  and yes, we enjoyed our meal.

I do wish those ingredients would not make so much noise in the cooking process. You would think it is a matter of life and death.