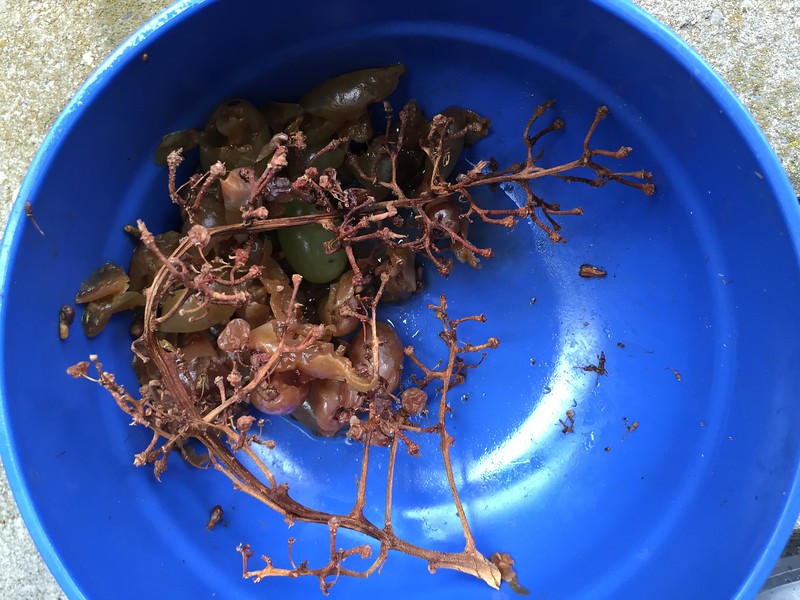 No, this is not one of my mysterious photos, submitted to a contest on pictures of fruit, it shows the remains of my grapes which disappeared overnight. Mr. Swiss decided to buy some grapes last week, as it is now the season. They are a reasonable price and according to what the best buy of the week is, this grape type was being  sold as a special offer.

My GP doctor actually told me that grapes were very healthy. They probably are, but when you suffer with diabetes and other digestive problems, they are not exactly the best idea of health. I prefer the seedless grapes in any case. There is nothing more annoying than biting on a grape and having 3 or 4 seeds to chew on, which do tend to have a bitter taste.

Anyhow I am digressing. As I did not want to eat the grapes and Mr. Swiss discovered they were not as good as he thought they might be, we were left with a bunch of grapes, minus the few that we had eaten. Coupled with the grape harvest, we also have the wasp invasion. Wasps love grapes, actually they love anything you might be eating, and they seem to zoom past from nowhere. I once observed a wasp carving a small piece of ham, which he flew off with clamped in his tiny front feet. I decided as we did not want the grapes, it would be a good idea to leave them in a dish outside to give the wasps something useful to do and to keep them away from our food. Basically this works. I was actually looking forward to taking a photo of the wasp invasion of the grape remainders. In the meanwhile something strange happened.

The bowl contained more than half a branch with many grapes in the evening. The next morning I did my usual observation of the state of the garden and noticed that the grapes were gone leaving only the stalks, as can be seen in the picture of the evidence above. Now I know wasps can overdo it, but no wasp tribe would be able to eat a complete bowl of grapes overnight. Wasps are active during the day, in the evening they sleep and dream of what they can eat the next day. I asked Mr. Swiss where the grapes had gone. He replied he was thinking the same and cross his Swiss heart, no, he had not eaten the grapes – after all they do not agree with him.

Where did the grapes go? Our feline Tabby does not eat fruit, it does not form part of her  diet, she is more into flesh, the fresher the better. If it had been a bowl of birds or mice, there would be no discussion, but it was grapes. We now have under suspicion the birds, mice, hedgehogs or a grape eating monster that lurks in the shelter of a tree, waits for the humans to sleep and then crawl up to the bowl of grapes and eat them, absorb them, or whatever monsters do. Perhaps they have children that need grapes to survive. I decided I should perhaps organise my alarm for the early morning hours. I might see some strange shapes walking to their nest of baby grape eating triffids, carrying grapes balanced on their heads.

One thing is now certain, there will be no more grapes bought and definitely not left outside. There is no telling what could happen. I just got a telephone call from Steven Spielberg about his new film “The Return of the Grape Absorbers” or “The Secrets of the Swiss Grape Vines”. I turned the offer down. Do not want a film team trampling all over my garden looking for grape monsters.

Today I will venture into the unknown paths of the supermarket. I am sure it will be an exciting expedition, full of choosing, buying and paying for it all. I noticed on my iPad connection to my supermarket they have a special offer on chysanthemums for only 3-4 francs a pot, so I will probably indulge. My two pots of dahlias on the table in the garden are now drooping the flower heads that remain. I will plant them somewhere in the garden for next year and replace them with the mums. Oh the joys of planning my daily escapades.

Be kind to your computers, and do not forget – behind every tree there are grape robbers. They might even be in your home if you put your grapes in a dish in the kitchen so beware.