This is not easy. It is all about I, me and myself and began perhaps 25 or 30 years ago, who knows? I was then 40 years old, in the best years you could say. I did not have more problems than the others and above all I was lucky enough to have no threatening  problems. I had a job, a family, and above all we were all more or less healthy.

I liked to go for walks in the country with the family. One day I had a so-called “dizzy spell”. I mean we all get them from time to time. I did not fall, but felt unsteady. I was also prone to small accidents: tripping on a rug perhaps, or an uneven surface. Once I fell down a complete stairwell, but luckily no breakages, just one of those things. It can happen to all of us, so why worry. The giddy attacks came now and again. At the same time my father had similar problems, diagnosed as Meniére – caused by a disturbance in the inner ear. He was already over 70 years old and these things can happen, probably ran in the family. We could talk about it. The doc gave me tablets as Menière was something that came, disappeared for a while and suddenly returned again with no warning: arriving in surges.

I suppose a main factor was my fall in London on Tower Bridge. I was on holiday for a week visiting my father and went for a walk with a friend in the evening to visit the new Docklands area of London. Little did I know then that out of the blue, with no apparent reason, I would fall. I had the quick reaction of placing my arm beneath my head to break the fall. The only thing that got broken was my arm. My friend took me to the hospital where I remained for two days, after having my broken arm pieced together again.  These things can happen.

Now we must fast forward to about 18 months ago. For some time I had been having problems with walking. I was now a golden oldie, and things no longer work as well as they should in age I told myself. Remarks were also made I should get out more, do more walking, otherwise I would get more rusty as I got older. This was true as I was never a person for keeping fit. I preferred to sit at home with my computer or a book. What annoyed me most of all were the people who said “is there something wrong with you? Do you have walking problems?”. I could no longer walk as well as earlier, but I was no longer fresh and ready to go – it must be old age.

And then it happened. I had a fall, was taking a photo, slipped and could no longer stand up on my own. This was nothing new, it had happened now and again, but with the help of a chair or another object, my husband, I could stand again. This time it was not possible. A taxi was called, I was admitted to the ER at the hospital, no breakages were found, and I was sent home to recover. I visited my doctor. She decided I should visit a neurologist to clarify my various “accidents” and dizziness.

I let things take their course, why not. I had an open mind about these problems. I was now approaching 70 years. After the first scan of my back, my open mindness was becoming a little shattered. A day later the specialist called me, said there were some irregularities and I should also have my head scanned. My open mindness had taken a knock, it was disappearing. When I arrived at the X-ray institute they told me that I should also have a thorax x-ray. I was slowly shutting down. My specialist had already mentioned the word “illness” when talking of my problems. An appointment was made for further examinations at the local hospital responsible for neurological examinations.

Was I ill, was it serious? I decided to make an Internet journey through various channels of my problems and my treatment and discovered two letters “MS” Multiple Sclerosis. Everything pointed in this direction. The confirmation followed after the final examinations at the hospital with various tests and a lumber puncture withdrawing liquid from the brain. My samples were sent all over Switzerland to various laboratories.

How do you react? I did not react. I suspected it myself, it seemed to me that everyone else was reacting. 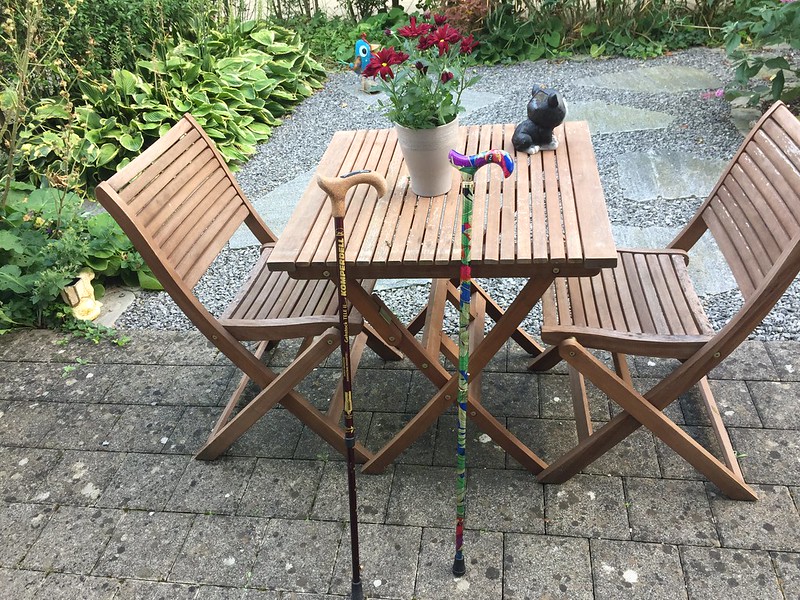 This is the current result. The cane on the left is the one I use at home, and the flashy cane on the right is for the general public. I mean if you have to have one, then go the whole hog.

In the meanwhile I attend physio therapy once a week to maintain the feelings that I still have in my legs. Funny how you begin to reflect on your past “healthy” life and realise what happened then was probably due to MS. My dizzy spells definitely, part of the “surge” mechanism.  You do not get MS at the age of 70, it is there already, and slips into your body over the years. There is no cure, but you can stablise it by taking medicine. I was summoned last week to my specialist to talk about treatment. The decision was to be my decision, as there will be side effects, but nothing serious. Do I have a choice? Yes I do and do not. I am no longer getting surges for the plain reason that that stage is already gone. The next surge might be a big one, and the prospect of walking with two canes, a zimmer-frame or even a weelchair is becoming a possibility. It seems I am now chronic, but, where there is a will there is a way. I am faced with a choice of taking drugs, or just carrying on until the inevitable happens.

This week-end I will be receiving a large parcel, express post, with ampules of my drug. I am to put them into the fridge. On Tuesday afternoon the nurse will be visiting to show me how to go on the needle, every second day one shot and that is now the story of my future life. I am open minded, can be glad that I can do something to stop this illness that wants to steal my body from me. My problem is walking, otherwise I have been lucky up to now, but no-one really knows what the future might hold, but does anyone?

Discover Challenge: How I learned to be open minded and to live with it

35 thoughts on “Discover Challenge: How I learned to be open minded and to live with it”