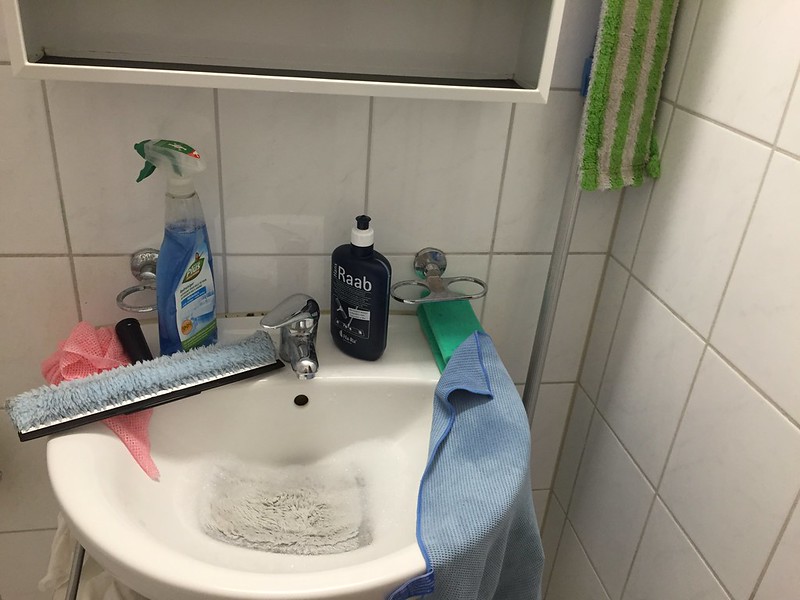 I hate Wednesday afternoons – silly really because it is basically only half an hour of Wednesday afternoon tbat I hate. It is the part after a golden oldie sleep when you decide to do the weekly shower cleaning session. Today I had the added annoyance of our gardening troop responsible for our estate, using their powerful leaf vacuums for converting our outside paths into neat spaces. No leaf remains unturned until they are finished which was a sleep disturbance.

I suppose I could leave the shower, it is not really dirty, becaue it is done basically every day on the surface. I reserve Wednesday afternoon for below the surface. For removing the limescale from the shower doors and walls, for wiping away finger prints on the wall tiles, just a bit more than usual. All the rest is done daily, a 5-10 minute job, all in a days routine.

But I hate this shower cleaning thing. When its finished, all the cleaning for the week is finished, I have done it all. I really do not want to spend my golden oldie days cleaning, but it has to be done. I have a good system. The Swiss cleaning company Raab supplies the cleaning glove and the liquid, I only need a few drops in the water. It is not even necessary to wash the cleaning liquid away. Modern science has invaded the cleaning world. Dry it off with your microtechnical cloth and you have done it all. It can be bought in the local drug store, or ordered online. Yes, the computer world has invaded the world of the housewife.  For the shower surface, apply the window cleaning device to wipe away the remainders – what could be better. A lot could be better, if you did not do it. If you left it for a week, two weeks, a month – just forget it with the problem that you have to spend an hour or more afterwards getting things shining again. And note the flat mop head. I have 10 of them. Use it once, put it in the wash and there is a clean one to replace it. Yes, I am orgnanised.

I know I am silly, stupid, and it seems I turn into a sort of fire spitting lookalike dragon when I am doing it. Afterwards I am cool and calm. As soon as I apply the mop to the floor I know I am on the finishing lap, the end of it all. I can relax, have a 10 minute lay down to recover before beginning my next work, which is more relaxing. I can sit in a chair and write a  blog. I could even read a book, but I reserve the reading for the evening. Tomorrow will be better and so will Friday. I have no work left, it is all done. Just stay out of my way when I clean the shower.

Today there was a problem. My cleaning world came tumbling down. As I removed my son’s bath towel from the top of the cupboard in front of the shower to replace it on the towel rack in the shower, a small glass bowl contining some sort of silly ornament crashed to the ground and sent its splitters everywhere. Luckily no spreading in the shower, but it had to be cleared away. I swept it together, I thought I swept it together, but no. The glass splinters found their way into all the microscipic crevices of the corridor. The quest for the remains of the small glass bowl continued. I kept my imitation poppy head in this glass bowl. It is worn once a year around the 1st November to commemorate the end of the first world war and its victims. I am probably one of the few that actually wear it in Switzerland, being british. I found another receptacle and so life goes on. I will also now be commemorating the day I smashed a small glass bowl whilst cleaning the shower as well as the end of the war.

I suppose there are fiercer things. I could have cut my finger on a splinter of glass, and then it would have been a case for an ambulance, a blood transfusion, who knows. I am now cool and calm, the incident is forgotten – until the next time.