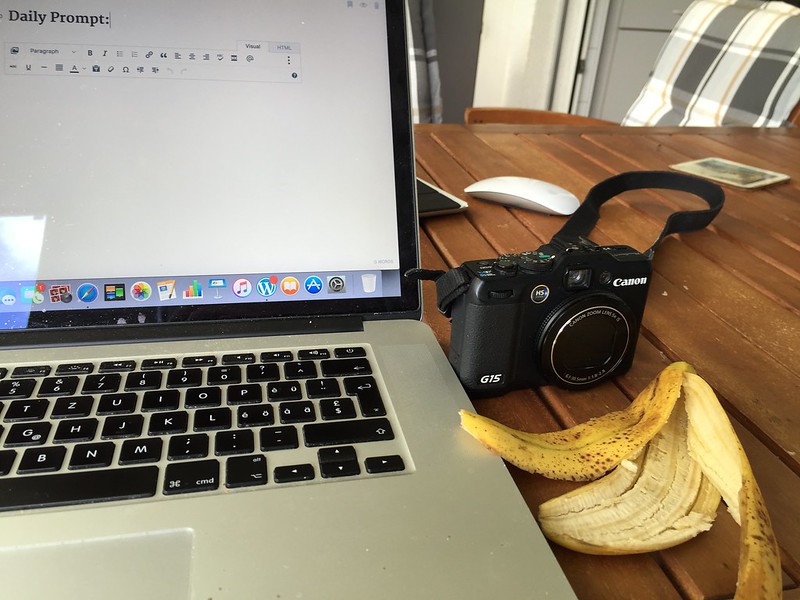 These daily prompts are slowly becoming a daily confessional: telling everyone my guilty secrets. I will not hide it all but tell it as it is. Yes, every afternoon I sit at my computer and write a daily prompt. Before beginning to write I eat a banana, and always have a camera near in case that something happens and I can take a photo of it. Now you know it all, we all have our little vices.

Mr. Swiss just told me that the apples on our new gala apple tree, which I grew from an apple seed in a small pot when I was working in the office are no longer edible. The have now gone soft and brown and are inhabited by ants. This was cue to my next vice, so I used my super DSLR camera with the macro lens to take a photo of the infected apples – these vices know no borders.

My problem is that I am a boring person. I do not drink, do not smoke  and only write blogs on the computer or read books. I do not even indulge so much in eating cake, biscuits or other sweet stuff, not to mention ice cream, basically because I am diabetic and also have a lactose sensitivity. Is life still worth living? Of course, I can still eat bananas. What would an ape be without its banana.

Oh, I almost forgot. I do have a vice, I like to sleep after lunch for an hour or two to recharge my batteries. It is a so-called midday golden oldie sleep. Another vice I have is playing with my mobile phone or iPad. My phone is full of secret appointments, such as doctor visits, tablet reminders and many telephone numbers. We no longer have a landline at home, and so this telephone is my only connection to the outside world.

My iPad is important for me to see what is happening on Facebook. Yes, another vice, I belong to Facebook and even have my own community there. I do not like to expose my guilty secrets in public and so I keep them for my community page, which is mainly reblogs of my WordPress writings. Now and again I might make a comment. I prefer to keep my opinions to my own page and not have it spread all over the place. We all know how quickly matters can be misinterpreted, take an example from Donald Trump and Hilary Clinton. They should have cancelled their pages in Facebook before entering politics. Oh, they were not in Facebook, it was all done by the others? There you see what can happen, perhaps my WordPress blogs are now being distributed in unknown places.

I was reading yesterday in Internet there is a place called darknet. There were even instructions how to get there and read everything that should not be seen or mentioned. I naturally made notes and will be trying it out in the near future. Apparently it originates from the American military powers. Will the truth now be told about George Washington. Did he chop down his father’s cherry tree or not.

I have nothing more to say, I am a blogger and my name is Angloswiss.