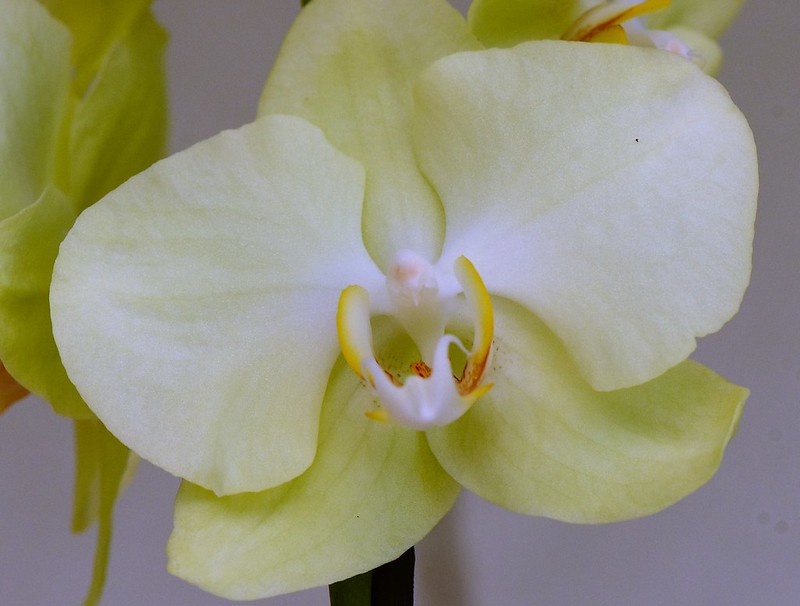 I have a new orchid. Its predecessor was no longer as fresh as it should be, was losing its flowers and so I had a look at the garden department of the supermarket and saw they had a special offer on the big orchids so I decided to buy one. I wanted a white orchid for some time, but Mr. Swiss persuaded me to go for the more yellow variety. 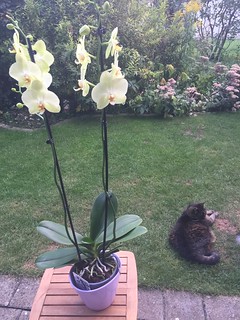 As you can see it is quite big. I took the photo on the left in the garden, but my cat Tabby decided she also wanted to get into the picture.

I quite like orchids because they flower for quite a time, often up to 1-2 months. They cost a little more than a flower bouquet, but flowers in a vase might last a week if you are lucky. You can keep the orchids when they have finished flowering and perhaps they might flower again, although not always. I usually choose an orchid that still has closed buds as it means to me that they are still fresh. 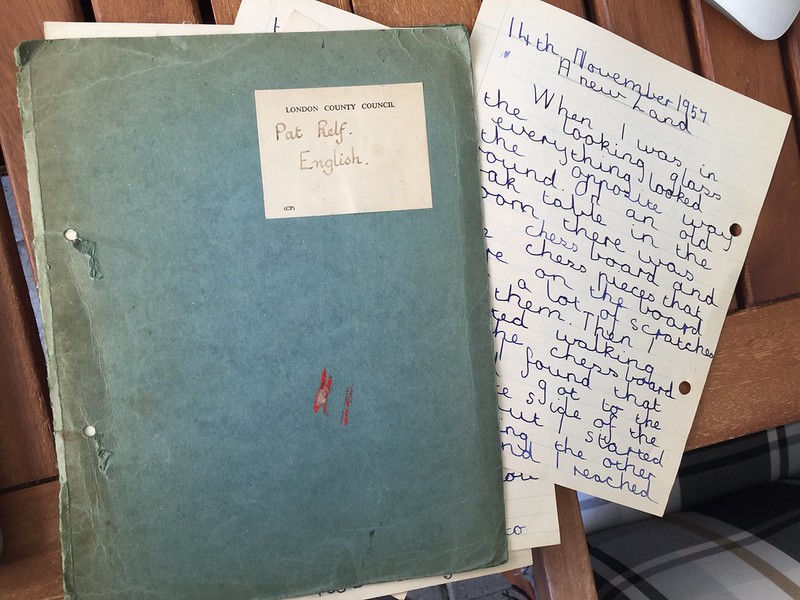 Above is a photo of my english composition file that I  wrote in 1957. I just found it and read a few of my works, but decided not to reprint them here. They were not exactly prize suspicious, but my beginnings. Note the perfect handwriting, the bigger the better was the motto in school.

I don’t cheat, I am not clever enough to cheat, I leave it to the politicians and journalists. I think they attend lessons on how to cheat. If I cheated it would get too complicated, because I would probably have problems in remembering what the actual truth was and what I made up. On the other hand I have one memory of my school days where I really, intentionally, and with aboslute no guilty conscience, cheated.

It was Friday afternoon in the school. I remember it was Friday afternoon because it was then that we always had to suffer an hour of an elocution lesson with a teacher that had a name I can remeber, but will not mention it here. It was a sort of styled French name and I am sure she only put the accent on the last “e” transforming it into an “é” to make it more respectable and not sound like an unwanted insect. I learned in later life that she actually had a studio in London for teaching perfect verbal english.

I grew up in the East End of London, as most of the pupils in my school. We were all lucky enough to have passed the examination to go to a grammar school and so we had the chance of a good education. If you wanted to learn, then you were in the right place. It was the place to go if you wanted a university education after schoo, but this is all background. I did not go to university, because I did not really know what to study in any case. I entered the commercial world of shorthand and typing.

Why did I cheat in the elocution lesson? Because on that particular Friday we had a test on everything we had learned. How to breathe when speaking, how to use the right muscles in the right places and how to sound like a perfectly educated younge lady when talking. The school did not want you to sound like an Eliza Doolittle lookalike from George Bernard Shaw’s novel Pygmalian about a cockney girl that was re-educated in her manner of speaking to show people it could be done to be accepted as a lady of society, if you only spoke proper like.

No matter how I tried, my “a” still sounded like an “ay”, to he extent many years later, when married to Mr. Swiss that he asked why I always pronounced “Wales” (the country next to England) as “Wa(y)les” which I had never noticed. I was convinced my spoken english was perfect, but there are some things that embed themselves into your way of speaking that you no longer realise.

And so the test for what we remembered on how to apply the rules to speak properly began. I did not have a clue, no interest, and actually forgot all about this test. It was not an important exmination on life and death, just a check to see if we had been paying attention in the class. I was quite good at it actually. I sat innocently at my desk with my open small notebook lying on my knees so that no-one could see. And so question for question was answered perfectly as I copied everything from my notes. I was one of the A- results. I could have got an A without the -, but I did not want to overdo it. She might have got suspicious.

Thus it goes to prove that cheating does not pay off. Although I really try today to speak english like the english, my cockney accent is still lurking in the background. Most people in Switzerland do not really notice it, because their english is also not accent free. Politicians do not copy from note books, they no longer realise they are cheating.

Daily Prompt: Cheat – who me, no never, almost never. 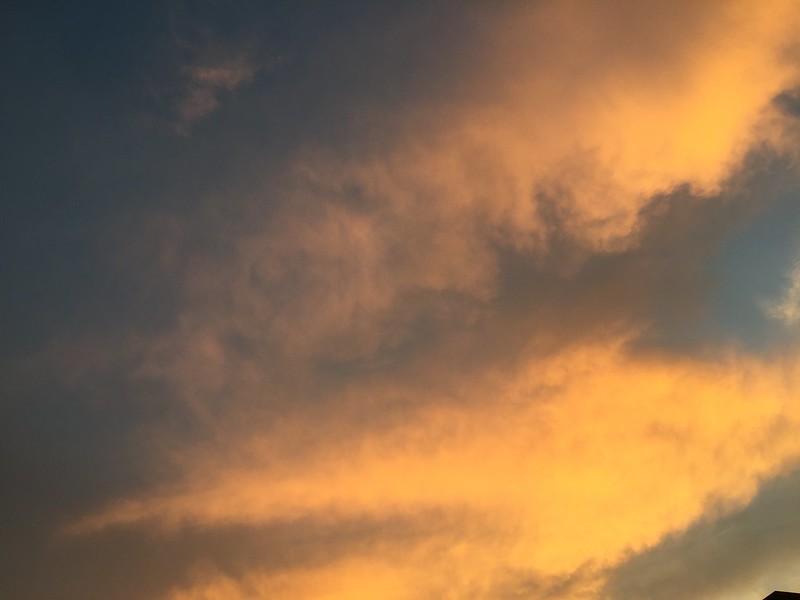 I was sitting out on the porch yesterday evening after the evening meal and everything was suddenly bathed in an orange light. I decided to check if “they were here” and looked up. I saw no spaceship but this was the sky. Of course, I captured the moment on my phone camera. Our temperatures yesterday were heat wave similar. Mr. Swiss said that “they” (the unknown creatures) had predicted some rain later, so this was probably the ouverture. This mysterious colour soon changed into something more normal and I forgot all about it. I watered the garden as it had been very hot and my plants were sort of hanging their heads, waiting for refreshment.

Nothing more happened until I was awakened around 1 o’clock in the morning with a loud crash and it seemed that the sky had opened and we were getting a general shower. It was the first rain for at least two weeks, and it was making up for lost time. We had the whole show with bangs, rain and probably bolts of lightening, although I decided not to leave my comfortable bed to watch it all. After the first bang, we heard a rattle followed by a meow. Tabby our feline had decided on another night sleeping outside until the storm began. She was faster than a Formula 1 racing car as she entered through the cat flap. Thunder for a feline must be something like a bomb exploding. Mr. Swiss decided to have a look and said she was now indoors and not very happy.

Things quietened down and to the background of falling rain I fell asleep, but Tabby was lonely, needed attention and in the early morning hours she decided to play a tune on our bedroom door with regular stratching noises. This built up into continuous meows of the moaning kind, probably translated with “let me in, you bed is more comfortable than mine”. I was tempted, but no way, otherwise you have a moaning feline forever in your bedroom every night. Either she stopped or I fell asleep, but things calmed down.  This morning she was sleeping again outside on her favourite chair of the moment. Cats seem to have short memories.

It is another bright sunny morning and despite the night’s signals that the end of the world is around the corner, things have calmed down. The garden now has enough water and it looks like it will become a nice day, although I hope not such high temperatures in the afternoon.

Have a relaxed Sunday everyone, take it easy and if your are bored, you can always write a blog about it.