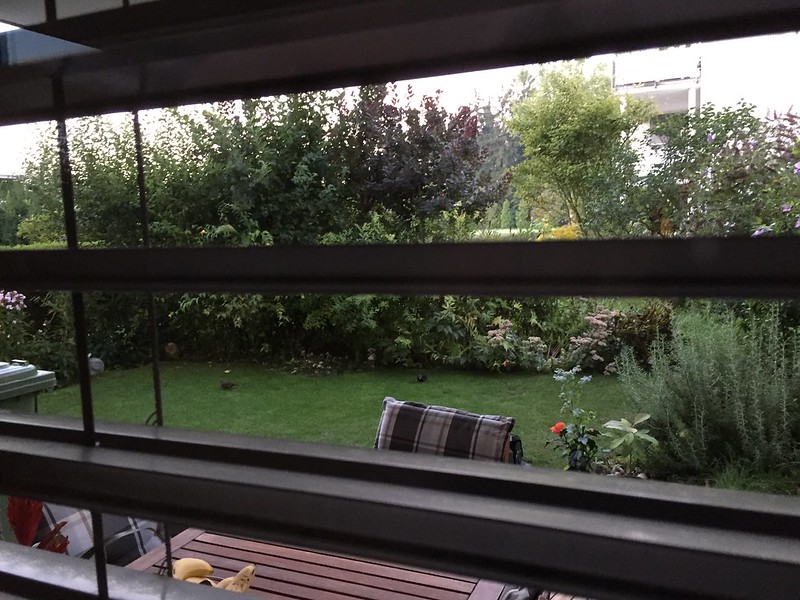 Someone was taking photos before I arrived in the kitchen. Mr. Swiss noticed our blackbird pair were again foraging in the garden for a few worms and decided on a few photos. He did not want to disturb them, so took them through the blinds. In the meanwhile he has also eaten a banana for breakfast – see remains on the table. He afterwards progressed to our small video camera and took a film of the two birds, but this time from the porch.  The things I miss when I stay in bed, although I was going through my new exercises from the physio therapy. They are my favourite exercises that I can do in a horizontal position, laying on the bed: no stress and relax.

It is again week-end, and am now planning how to eat my way through the week-end and survive. Food seems to be the main interest in a golden oldie life. The adventure of the day seems to be lunch. I usually cook fish on Friday, not that it has anything to do with tradition or religion, but why not? Switzerland is not really a fish land, and all sea fish is imported because we do not have a sea. We only have lakes and rivers, which means trout and similar and they are expensive. I sometimes buy salmon but salmon is no longer as exclusive as it used to be and often farmed. You can get the so-called wild salmon, but I do not know how wild it is, and probably also bred in some sort of tank. There is also something what we know as “pangasius”. I just looked it up in Internet and in english is known as “iridescent shark”, although I was never aware that I was eating shark. If you do not like fish that tastes of fish, then this is the one for you. It originates somewhere in the Mekong basin of Vietnam and is apprently a sort of catfish, very cheap and has absolute no taste of anything, not even fish. I also have a strong suspicion that this fish is farmed to an extent that it is better not knowing in what sort of water it swims, before arriving at your local fishmonger. I no longer buy it. Even fish deserve more respect, but as said, Switzerland is not really fish country. This is also one of the reasons that I no longer buy prawns or other such shell fish. Their surroundings are not exactly the most hygenic today.

Switzerland is cheese country, but you cannot eat cheese for lunch and dinner. Anyhow today it will probably be a normal average “bratwurst” (sausage) with chips and a veg. Who knows what the week-end will bring. We could really think I have nothing better to do than think about food, but a golden oldie cannot survive only on blogs and computer life.

Time to go, life is calling, and so is the vacuum cleaner. See you around, same time same place unless something exciting happens in my golden oldie life. Perhaps a space ship might land in the garden. Actually yesterday was quite exciting also an anti climax. I was sitting outside and heard a rumbling sound which I faintly recognised. I looked up and there was a hot air balloon hovering over our garden, almost within touching distance. My first thought, take a photo. Unfortunately when I eventually had my camera, after a tour of the appartment, the balloon had disappeared. Mr. Swiss organised our own search troup but it was nowhere to be seen. That is the reason why the first picture of the day is the garden by Mr. Swiss and not the hot air balloon.

And now I am really gone, have fun, two days holiday ahead (holiday?).